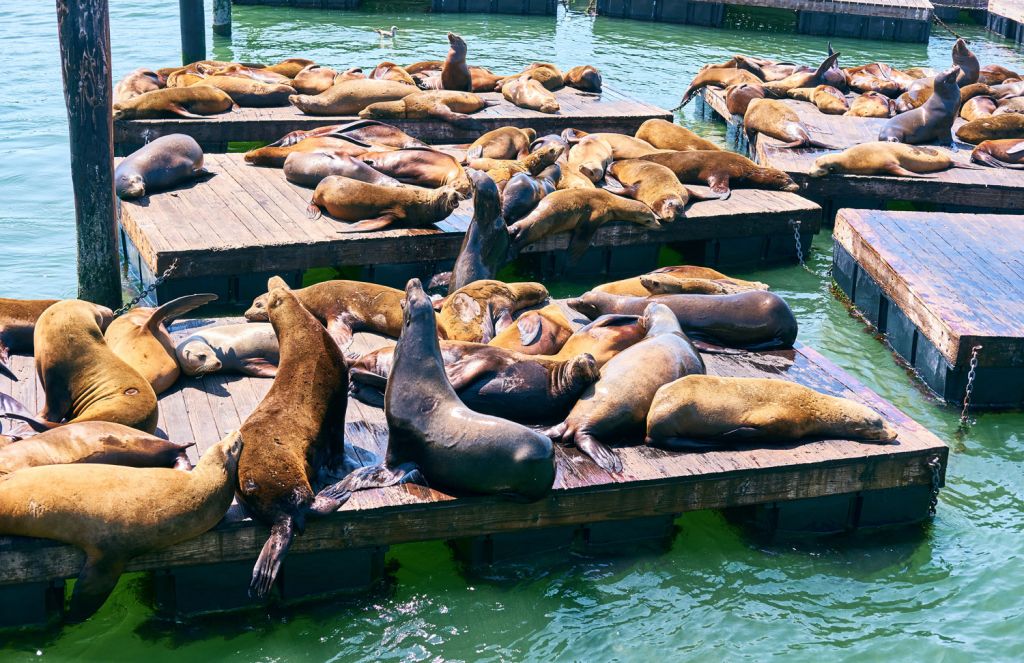 January 2020 marks 30 years since the city’s much loved, world-famous sea lions made PIER 39’s K-Dock their home, where they have remained permanent residents ever since.

PIER 39 and Aquarium of the Bay have launched the “Sea Lions in San Francisco” initiative. It includes the reveal of 30 local artists’ six-foot-tall Sea Lion Statues hand-painted in their own unique styles, each sharing an environmental message with visitors to San Francisco.

The arrival of the Sea Lions

After the Loma Prieta earthquake in October 1989 locals moved their boats away from the Pier. California sea lions began hauling out, and by January 1990 approximately 500 sea lions were in situ.

With its protected environment and proximity to the plentiful food supply in the Bay, Pier 39’S K-Dock quickly became the colonies new home.

The PIER 39 marina staff turned to the Marine Mammal Center, an organisation devoted to the rescue and rehabilitation of marine mammals, for advice on the new noisy guests.

The decision was to let the sea lions stay at PIER 39. Their residency at PIER 39 is truly a natural phenomenon that brings joy to Bay Area locals as well as visitors from around the world. The boisterous barking pinnipeds continue to make local, national and international headlines to this day.

30th Anniversary Celebrations
I commemoration of the 30th anniversary of the arrival of the sea lions to PIER 39, thirty six-foot-tall Sea Lion Statues painted by thirty local artists have been unveiled at the marina. The statues have now been dispersed as permanent installations across the city, where they will remain on display throughout 2020 for visitors to spot the sea lions in notable spots in San Francisco.

Conceived by the Smithsonian affiliated Aquarium of the Bay, Sea Lion Center and jointly implemented with PIER 39, this art installation is part of the largest STEAM (Science, Technology, Engineering, Art and Maths) initiative in California.

Each one of a kind, hand-painted six-foot sea lion statue depicts a local artist’s experience with the animals and their environment. From biodiversity, plastic pollution or sea lion rescue, each sculpture tells a true story about the lives of these mammals and their changing environment.

Read more articles on travel to the USA in our dedicated section here.