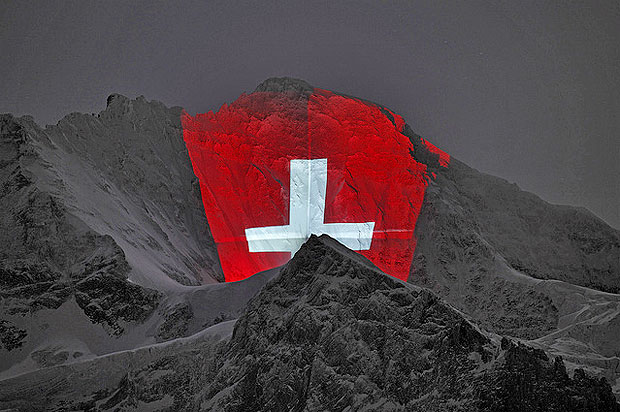 On the night of 1 January, light artist Gerry Hofstetter projected the Swiss cross and other images on to the north face of the Jungfrau. This launched the centenary year of the Jungfrau Railway, Switzerland’s leading mountain railway.

Gerry Hofstetter has set up camp beneath the Jungfrau summit at 3380 metres above sea level, and is staying on the glacier in the heart of the Swiss Alps for nine days. Weather permitting; from here he will illuminate the Jungfrau on eight evenings until 8 January 2012. Portrayed will be a Swiss cross, a Jungfrau Railway train and a portrait of Adolf Guyer-Zeller, founder of the Jungfrau Railway. The temperature at this altitude can drop to minus 30 degrees centigrade. Enough supplies for three weeks have been taken up to the camp, as a helicopter rescue is impossible in bad weather. 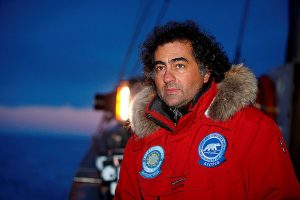 The illumination of the Jungfrau launched the start of celebrations for the Jungfrau Railway centenary. On 21 February 1912, Italian miners used a massive charge of dynamite to make the breakthrough to daylight on the Jungfraujoch. They completed the construction of the railway tunnel through the rock of the Eiger and Mönch mountains to the highest-altitude railway station in Europe. This incredible pioneering masterpiece has become Switzerland’s leading mountain railway. Today, the Jungfrau Railway carries around 700,000 passengers per year.

The illumination project is possible thanks to cooperation between Gerry Hofstetter, the Jungfrau Railway and Bayer. As a cultural partner of the Jungfrau illumination, Bayer wants to foster global awareness of the beauty and unique quality of the Swiss mountain world. Bayer has been active in Switzerland since 1956 and supports scientific projects in schools, the development of energy-saving technology and bold and visionary cultural initiatives.

In addition, a world premiere was also opened on Kleine Scheidegg on 1 January 2012: the ARTRUN – an art exhibition for skiers. Impressive images show the construction of the Jungfrau Railway, Gerry Hofstetter’s light art from around the world and Bayer’s cultural commitment.

The illumination of the Jungfrau can be followed live on a webcam at http://www.jungfrau.ch.