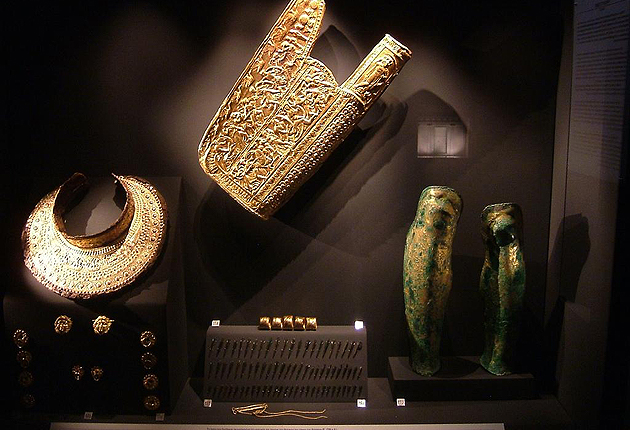 As some of the mysteries of ancient Greece are slowly revealed with the extremely important find of a massive ancient tomb at Amfipolis dating from the 4th century BC, renewed interest in Greek antiquity will lead to a further increase in visitors to archaeological sites and museums this autumn, the Greek National Tourism Organisation anticipates.

Two sphinxes have been found guarding the entrance of a tomb dating between 325 and 300 BC in ancient Amfipolis, in the region of Serres in northern Greece – an hour’s drive east from the city of Thessaloniki. The tomb was found when archaeologists were excavating an ancient mound and is expected to be fully clear of dirt within the next few weeks. Workers have uncovered a flight of steps leading to a path flanked by masonry walls, which end in a built-up arch covering two headless, wingless sphinxes.

Tourists and locals have been flocking to get as close to the tomb as possible, but this is currently heavily guarded and will open to the public once archaeologists complete their work. However, the rest of the Amfipolis site – which is one of the richest archaeological regions in the country – is currently open to visit and hosts an important museum and the famous colossal statue of the Amfipolis Lion, which is believed to have once stood at the top of the great tomb.

Greece’s vibrant second city, Thessaloniki, makes a great base to explore the region’s museums and archaeological sites including the Archaeological Museum and the Museum of Byzantine Culture in the city, while the royal tombs and museum of ancient Aegae in Vergina, an hour’s drive west, is a must-visit and provides a fuller picture of the grandeur of the ancient Greek kingdom of Macedon (http://whc.unesco.org/en/list/780). These sites and museums are just some of the 33 important cultural attractions across Greece currently enjoying the extended opening hours of 8.00 am – 8.00 pm until 31 October 2014.

Christina Kalogera, Director of the GNTO UK & Ireland Office said: “September and October is a fantastic time to visit Greece and experience its extraordinary history, art and culture. Warm, sunny weather prevails with temperatures averaging around the mid 20s Celsius – perfect for exploring.”