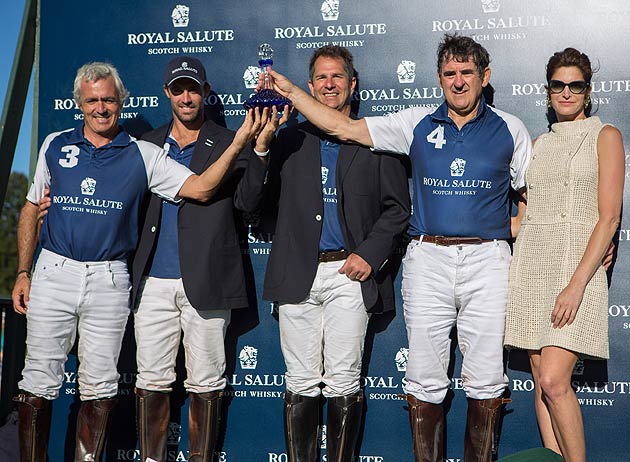 The world’s best 10 goal player Facundo Pieres led the Royal Salute team to victory in Greenwich, USA on Sunday, triumphing over opposition team Airstream, 9-8. The Royal Salute Jubilee Cup marked the conclusion of the high-goal polo season in the North East of the USA in a thoroughly exhilarating match with a flurry of goals scored by Airstream in the final minutes.

As players raised their glasses in celebration of the glorious occasion, Facundo Pieres commented on the Royal Salute team’s victory; “This closing match of the season, here in Greenwich, was electrifying to play and a fantastic match for Royal Salute to win.  In the last 4 and a half minutes of the final chukka, Airstream added an incredible five goals, making them tough to beat. The polo and the event were of the highest calibre; and on behalf of all the players, our thanks to Royal Salute for championing it.”

The post-match presentations were made in front of one of the largest crowds in Greenwich Polo Club’s history. Highlights included, Steve Lefkowitz being presented with the bespoke Royal Salute Most Valuable Player Jacket, created by British Savile Row tailor, Norton & Sons. Facundo Pieres’ chestnut mare played in the final chukka was awarded the Best Playing Pony blanket. Part of the presentation ceremony were  Esquire’s Matthew Kitchen, Avril Graham of Harper’s Bazaar, and Managing Director of the Greenwich Polo Club, Leighton Jordan.

Malcolm Borwick, England polo team player and Royal Salute World Polo Ambassador, was in attendance to take part in the post-match presentation and commented; “It was great to be back at Greenwich today, having captained Prince Harry’s team at the Sentebale Royal Salute Polo Cup back in May. Royal Salute’s continued presence in the polo world is based on the shared values that the sport and the brand hold, and we look forward to next year’s edition already”.

The United States Polo Association’s CEO Peter Rizzo added; “We are excited to culminate the North Eastern US high goal season with this special event that showcased the athleticism of these talented players and their horses. Congratulations to Royal Salute victors, and to Greenwich Polo Club for hosting another successful signature event.”