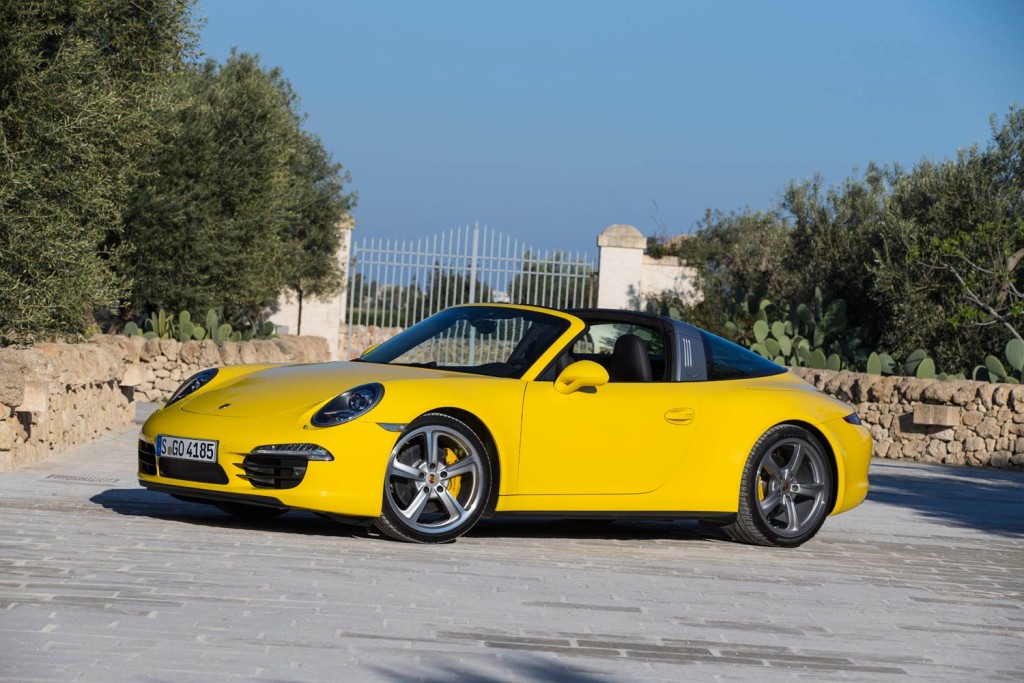 The Porsche 911 Targa has a long-standing heritage spanning 50 years. It takes its name from the Targa Florio road race in Sicily, in which Porsche claimed several victories. 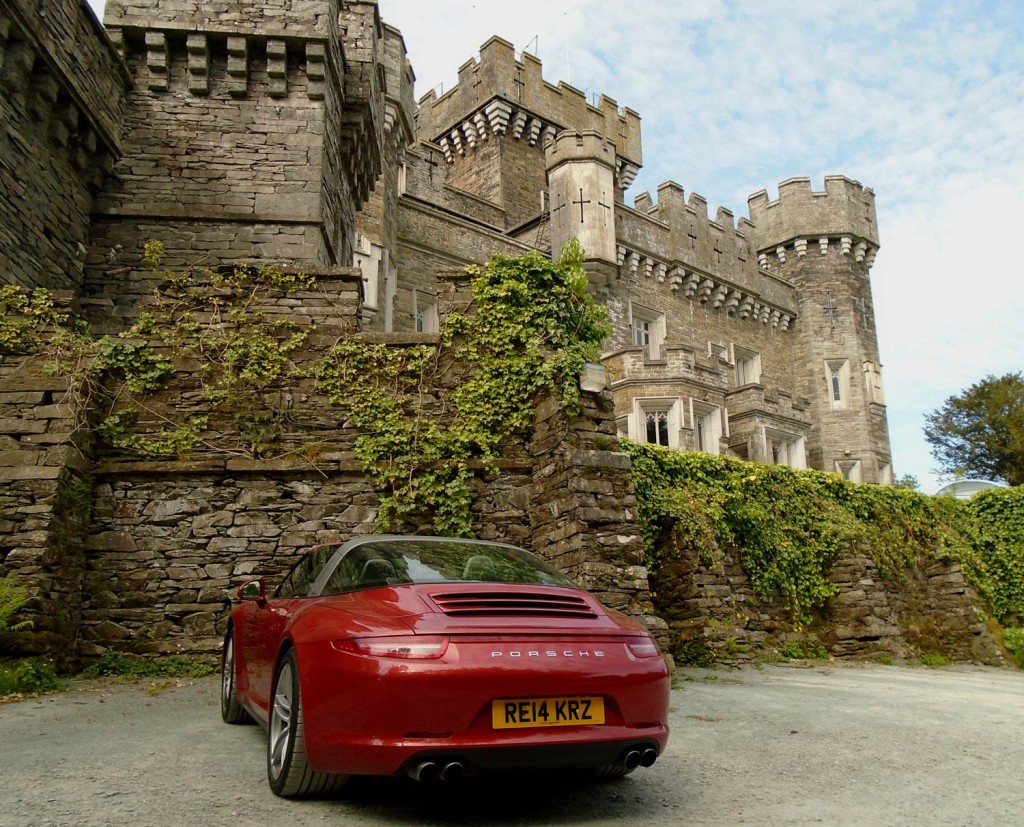 The latest generation was introduced last year at the North American International Auto Show (NAIAS) in Detroit. It continues to maintain the classic silver fixed roll bar design which has become synonymous with this model. The body itself is based on that of the 911 Carrera 4 Cabriolet.

The model we tested

The Porsche 911 Targa we tested was available in two different guises: the 3.4-litre, 350hp ‘4’ which we drove, and the more powerful ‘4S’. This version boasts a 3.8-litre six-cylinder engine and 50 extra horsepower. When the original Targa first came out in September 1965 at the Frankfurt Motor Show, the removable rear window was made entirely from plastic, with a glass option not arriving until later. Of course, technology has moved on considerably through the decades.

The curved glass and heated rear window can now be opened and closed at the touch of a button, including from the key fob. It’s something that can only be done when stationary and takes precisely 19 seconds for the spectacle to literally unfold. It’s a pleasure to watch every time: the entire screen lifts up and back, which is followed by the fabric roof then disappearing behind the rear seats. What you are left with once the roof has retracted is an open-air experience. But, one that is not as fully fledged and wind-swept as when driving a true cabriolet. 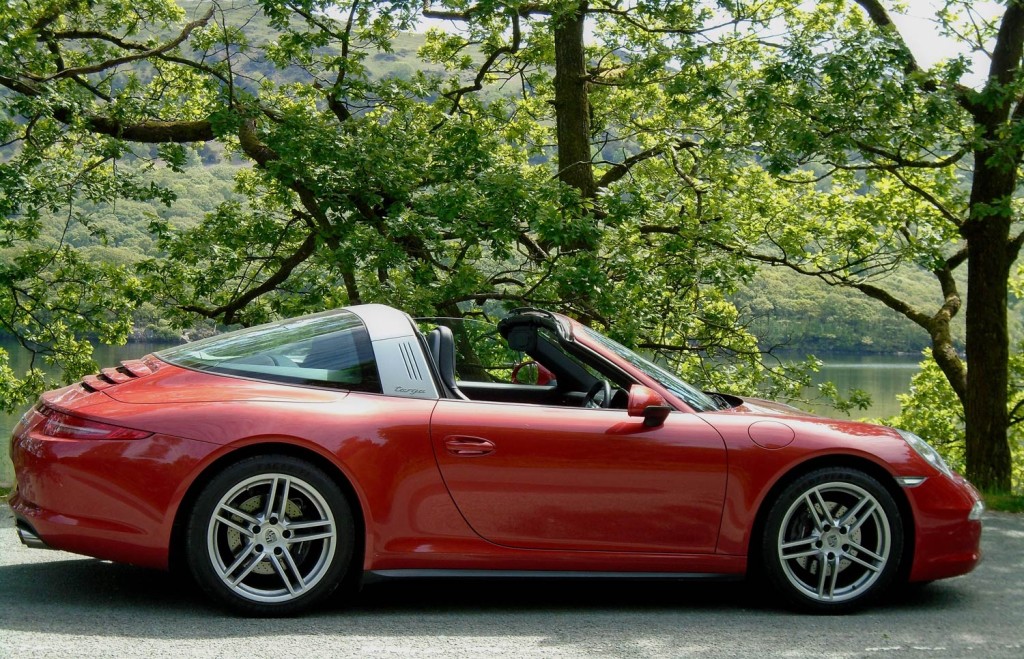 The interior of the 911 Targa

As you would expect from a 911, the cabin, which is lined with sumptuous black leather and Alcantara. It is very well laid out, and the head and legroom are ample. Both the driver and passenger are extremely well supported by the sports seats. These come complete with an electric backrest and height adjust as standard. Our test car was fitted with the £312 option of all-electric 18-way adjustment of the longitudinal positioning, seat cushion angle, seat cushion depth, four-way lumbar support, side supports and backrest for ‘optimal’ comfort in every driving situation. The 911 Targa is clearly sold as a four-seater. But the two places in the rear are really only suitable for children. Smaller adults can be accommodated at a push. The Porsche crest embossed on the two front headrests is a nice added touch when finances permit. 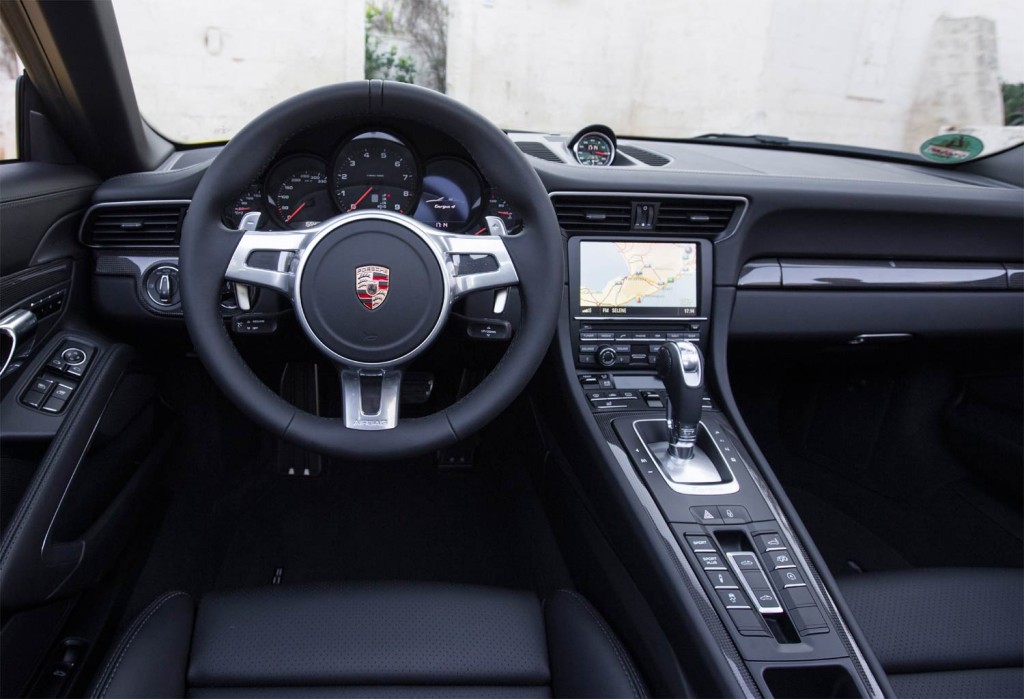 At the heart of the centre console is the Porsche Communication Management (PCM) touchscreen interface. This houses the very intuitive satellite navigation system, the DAB radio and ParkAssist display. Audio entertainment is delivered via the standard and highly adequate CDR-31 system and nine loudspeakers. There is the possibility to upgrade to the Burmester® and Bose systems for those who wish to have a power output of up to 800 watts.

When it comes to storage space, there are 125 litres of capacity under the front bonnet. This can also be opened using the key fob. In real terms, this compartment can easily accommodate a wheelie case for a weekend away or a quick weekly shop. However, anything more than that, and it starts to become a bit of a squeeze.

The shores of Lake Windermere are filled with plenty of tight and twisty bends lined with stone walls and blind crests. The Porsche 911 Targa 4 felt very much at home thanks to precise steering and good handling, which made navigating the country lanes absolutely effortless. Out on the open roads, the car hits 62 mph in just under five seconds when you put your foot down. This is just a touch slower than the 911 Coupé and Cabriolet due to the extra weight, but it’s no slouch. The Targa is perfectly capable of a top speed of nearly 180mph when the opportunity allows. And it truly comes alive at 3,000 revs. It is here that you get a real boost of power, and start to discover what the Targa is really capable of.  Something that can’t be experienced within the boundaries of the prescribed national speed limits.

There is also the added bonus of the Sport button which enables a sporty-gear changing map and reduces the shift times on the seven-speed PDK transmission. The Sport Plus option is designed for use in racing conditions, up to sixth gear. Gear shifts can also be changed on demand via the steering wheel-mounted paddles, denoted by the letter ‘M’ on the dash. 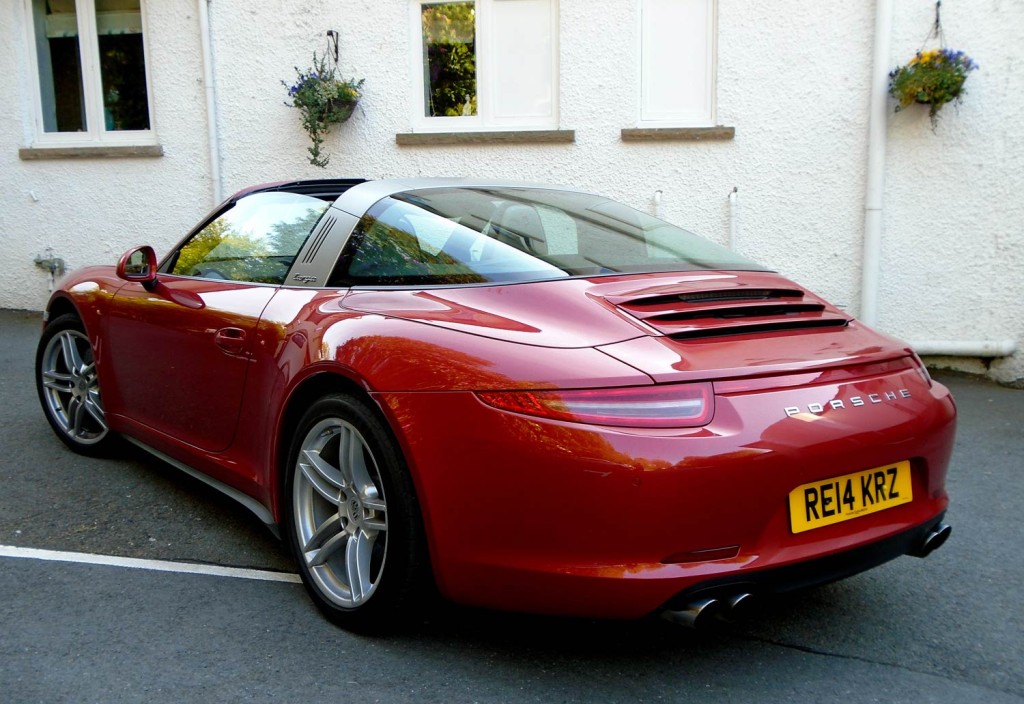 When there is the opportunity to open up the acceleration, the sound is sublime. Probably helped by the fact that our car was also fitted with a four-pot sports exhaust (an extra £1,772). Furthermore, you get to hear a deep growl thanks to the two exhaust lines being merged. With the roof down, these beautiful acoustics are further amplified.

The Porsche Traction Management (PTM) all-wheel drive system, which is standard on the Targa, means that there is plenty of grip and additional traction in both wet and dry conditions, although the limits of this aid were never explored. Drivers equally benefit from the retractable rear wing which can be operated manually, a feature designed to increase stability at high speeds.

In conclusion, The Porsche 911 Targa 4 is simply brilliant as an everyday sports car. It is the perfect tribute to what this model has always stood for. Furthermore, it is a greater carrier of the Targa gene to the next generation (if there is one), whilst also being the ideal solution for those who don’t desire a full-blown cabriolet, but still, want the feeling of driving in the open air.

Porsche 911 Targa 4 – Specification at a glance:

See more of the Porsche 911 Targa 4 below