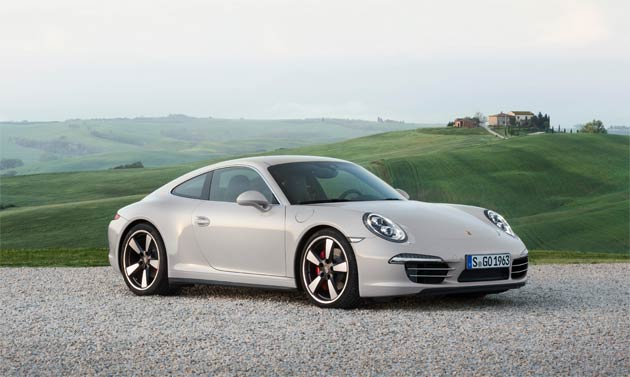 It doesn’t seem possible that the first 911 appeared on the roads 50 years ago, a car that conjures up an image and is instantly recognizable from just three spoken numbers, to celebrate this milestone, Porsche have announced a commemorative 50 Years Edition.

1963 or half a century ago not only witnessed the birth of the 911 coupé but it was so far back that the human race was still in the early stages of going into space, someone standing on the Moon was a distant dream. In 1963 the fastest production car in the world was the Iso Rivolta Grifo A3/L 327 at 161 mph, the Beatles were yet to reach super-stardom and no man had been timed under 10 seconds for the 100m sprint.

At the International Motor Show (IAA) in Frankfurt in September, Porsche will celebrate the fifty year evolution of this mechanical wonder with a 50 years edition, this special model will be a limited edition of just 1,963 cars signifying the year of the cars launch 1963.

The original model was known initially as the type 901, changing to 911 and has thrilled motoring fans across the world since. On the 12th September at the IAA in Frankfurt, Porsche will unveil this very special edition to the public,

So, what should we expect from this eagerly awaited 50 Years edition of the 911 coupé?

Just like the first coupé, the special 911 50 Years Edition combines a distinctive silhouette with a rear-mounted, flat-six engine and rear wheel drive. With excellent comparative performance, active sports suspension and exclusive body styling add contemporary appeal. In the same vein as the past seven generations, the Porsche 911 continues to resolve apparent contradictions – such as between tradition and innovation and performance and efficiency – and has become renowned as one of the benchmarks that sport cars are judged by. 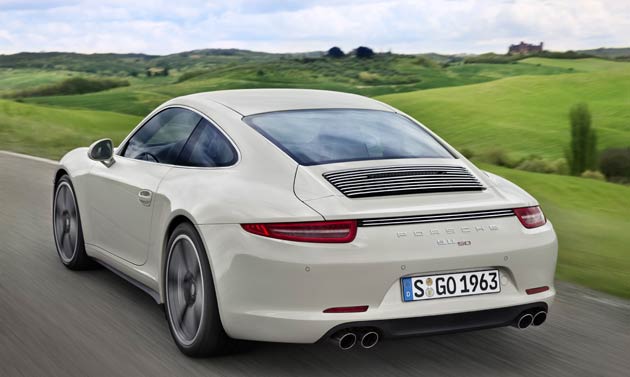 This wider bodied special anniversary 911 is based on the 911 Carrera S,  the car is 44 mm broader across the rear wheel arches – that is typically reserved for the all-wheel drive Carrera 4 models. The unique exterior styling is combined with features that have contributed to the 50-year success story of the car. For example, the Porsche Active Suspension Management (PASM), with special tuning to complement the increased track width, adds to the exceptional cornering dynamics. The car also features a sports exhaust system for increased emotional character.

Giving a clear indication to the rear-mounted location of the flat-six power plant are bespoke chrome strips on the fins of the engine compartment grille. These are complemented with special trims on the front air inlets, and in a strip across the car between the rear lights. A further contemporary interpretation of 911 leitmotifs are the unique five-spoke cast alloy wheels whose style has been inspired by the so-called ‘Fuchs’ wheels, a legendary rim that was in fact a Porsche design and first fitted to the 911 in 1966. The new 20-inch diameter wheels are finished in matt black paint with machine-polished centres. 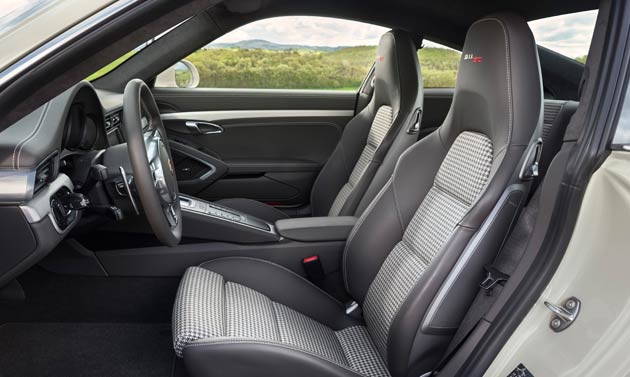 To denote that this car is a special edition, two special paint schemes are available, a darker Graphite Grey and a lighter Geyser Grey metallic, although not a special edition colour, customers can choose to have the vehicle in black. Each of the cars has a ‘911 50’ badge finished in two-tone 3D-style on the rear lid, which is repeated in three-colour embroidery on the head restraints and as a two-colour logo on the rev counter and the aluminium door sill plates. It is also displayed on the passenger side fascia strip together with the limited edition number of the individual vehicle.

Other exterior characteristics of the special model are high-gloss window frames and SportDesign exterior mirrors. A technical highlight is the Porsche Dynamic Light System (PDLS), which adds a dynamic cornering function to the already standard-fit Bi-Xenon headlights.

Inside, there are further styling touches reminiscent of the original 911 such as green labeling on the instruments with white pointer needles and silver caps on the instrument pivot pins. Another special feature are the centre panels of the leather seats, which are designed with a fabric pattern that evokes the ‘Pepita’ tartan design from the 1960s. The leather interior can be specified in Agate Grey or Black with decorative stitching. Sports seats with 14-way adjustment are standard, with 18-way Sport Seats Plus available as an option. The gear shift or selector lever – which, like the decorative panels on the dashboard, doors and centre console, is trimmed in brushed aluminium – comes from the Porsche Exclusive custom tailoring programme. 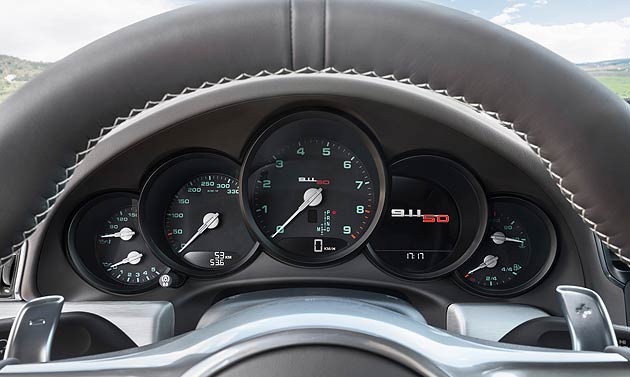 Customers can order the 911 50 Years Edition now from Porsche Centres, the first right-hand drive deliveries will arrive in September.

Fitted to every 911 is a Porsche Vehicle Tracking System (VTS), a sophisticated vehicle security package approved to Thatcham Category 5 standard, and customers are also able to explore the potential of their new car by participating in a complimentary course at the Porsche Experience Centre, Silverstone.