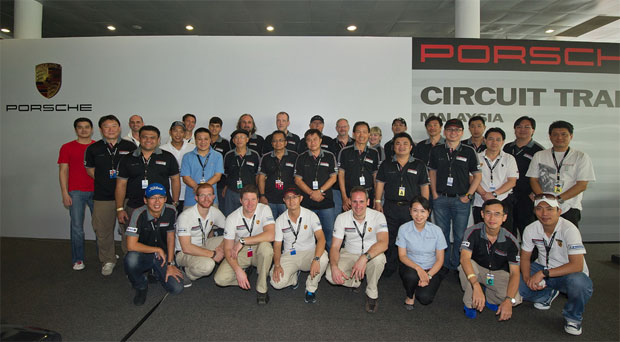 Porsche owners took their cars to the ultimate test, while training their own reflexes and pushing limits at the Porsche Circuit Training session on the 14th January 2012.

More than 30 owners of various Porsche models took part in this event that saw Cayman, GT3 and 911 burning rubber on the tracks at exceptionally high speeds on that day.

More than just a training session

The Sepang International Circuit (SIC) is one of the toughest tracks in the world with 2 long straights of nearly a kilometre, followed by tight speed corners, along with several high speed corners and the widest section of track around, the Porsche Circuit Training session makes the unthinkable imaginable.

From early morning registration at 8.15am, the air at the circuit was intense as these owners transformed into speedsters who were almost racer-like, owing to their racing gears and high enthusiasm to take off at break-neck motion. The Porsche Circuit Training event was aimed at training owners in vehicle dynamics and car handling techniques. Nevertheless, the atmosphere at the tracks seemed no short than that of a race day.

An instructor for the event conducted a briefing session on safety tips which covered techniques for steering positions, tyre forces, over-steering and under-steering. All drivers were well-equipped with knowledge on proper car handling prior to taking it on the tracks.

The drivers were divided into 4 categories – A, B, C and D to segregate the training level. There were 4 instructors to lead a group of 8 drivers and the entire circuit was divided into 4 quadrants. Each group was given 30 minutes to drive around and master each quadrant, while taking rotational turns for every driver to drive directly behind the instructor.

The Open Track Session commenced with drivers from all categories testing the powers of their cars on the full circuit. During the sessions, the Porsche Technical Support Team was very efficient in administering their support in maintaining the owners’ vehicles.

The event was concluded with a speech from Chief Executive Officer of Sime Darby Auto Performance Sdn Bhd, Arnt Bayer who, in his speech, said that the response for this year’s event has been amazing and comparatively greater than last year.

All participants and guests were served with a scrumptious dinner at which everyone enjoyed varied delicacies while concluding on the day’s events. To sum it up, the Porsche Circuit Training event was a tremendous success, seen evident in the enthusiasm of Porsche owners in discovering their cars’ full capacity and performance level.