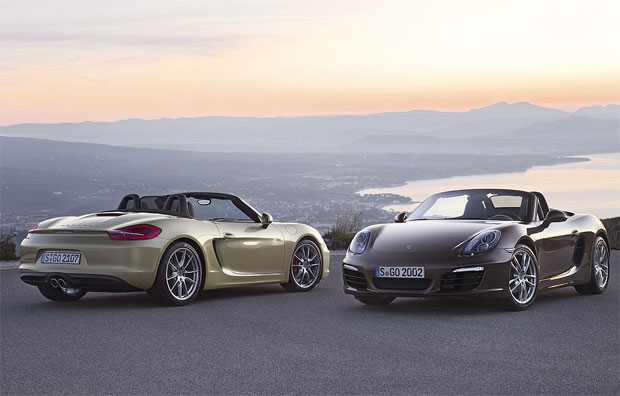 At the beginning of March, Dr. Ing. h.c. F. Porsche AG, Stuttgart, will be presenting one world premiere and two European premieres at the Geneva Motor Show.

The new generation of the Boxster will make its debut in front of an international public at the Porsche press conference on 6 March at 09:30 a.m. (MEZ) in Hall 1. The conference will be broadcast live via internet and via satellite. As European premieres Porsche will show the Panamera GTS and 911 Carrera Cabriolet too.

The technical highlight of the new Boxster generation is the considerably lower weight thanks to the lightweight design body and the completely revamped chassis. The mid-engine roadster’s comprehensive revamping is also apparent in its looks: the wheelbase has increased, the track is wider and the wheels are larger. In the process, Porsche has not just significantly enhanced the driving dynamics, thereby ensuring unadulterated driving fun, but the new Boxsters are 15 per cent more fuel-efficient as well: depending on model, their fuel consumption is significantly less than eight litres per 100 kilometres. Thanks to a root and branch styling makeover with shorter body overhangs, significantly forward-shifted windscreen, flatter silhouette and expressive edges, the roadster’s road posture is more muscular and more striking. The interior offers more space and the interior concept reflects the new Porsche outline with the raked centre console.

Porsche is unveiling the 911 Cabriolet to a European trade fair public right on cue for the open air season. Intelligent lightweight design, even featuring the use of magnesium in the hood, ensures less weight and more sportiness, lower fuel consumption and greater comfort. Moreover, thanks to the innovative roof concept, the typical 911 roof line is retained in its entirety for the very first time. The second European premiere represents uncompromising sportiness and intelligent Porsche performance: the Panamera GTS, the four-door car for the racing circuit. This most sporty of all Panameras puts on a persuasive performance with an NEDC fuel consumption of 10.9 l/100 km – only 10.7 l/100 km with low-friction tyres – and a top speed of 288 km/h, having first accomplished the sprint to 100 km/h in a mere 4.5 seconds. Its race track credentials are above all down to its chassis: more power, upgraded brakes, a body lowered by ten millimetres and the especially sportily tuned chassis with air suspension and PASM are the major technical modifications.