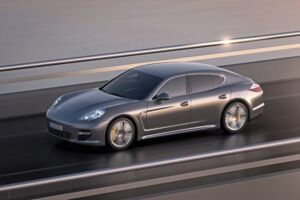 Dr. Ing. h.c. F. Porsche AG, Stuttgart, is set for a significant expansion of its own dealer network in China after a decade of successful market presence. The number of Porsche Centres is to be virtually trebled in the next few years, from 33 currently to around 100 locations. In so doing, the sports car manufacturer is giving itself the best possible chance of continuing to benefit from the expected boom of the Chinese car market. Bernhard Maier, Porsche AG Board of Management Member for Sales and Marketing: “Our products continue to inspire discerning Chinese customers. It is our goal that our sales and turnover will continue to outstrip general market growth by a significant margin in future as well.”

The sports car manufacturer has been present in China with its own Porsche Centres since 2001. Sales figures have been on a steep upward trajectory ever since: Whereas just less than 300 vehicles were sold in the country (including Hong Kong) in 2001, by 2010 it was already 14,785 units. Each year the sales figures in the country increased by at least 50 per cent, usually significantly more (the only exception: 2009). The 2010 sales record, for example, equates to growth of 62.7 per cent compared with the year before. Nowadays, China is Porsche’s second-biggest national market – after the USA and ahead of Germany.

The Shanghai Puxi Porsche Centre took the top slot among the Chinese locations – with 1,188 vehicles sold in 2010. The most successful model in China is the sporty off-road Cayenne, 8,612 of which were delivered in 2010, followed by the Gran Turismo Panamera with 3,833 units. The country has since become the world’s biggest customer for these two Porsche model lines.

Porsche’s outstanding performance in the Chinese market is also confirmed by independent sources. In recent years, Porsche vehicles have received awards from numerous Chinese specialist publications. The most recent example: “Auto, Motor und Sport China” awarded Porsche the title “Best Car Brand” for 2010. In addition to the Cayenne and Panamera model lines, both of which are built in the Leipzig plant, Porsche sees significant growth potential primarily in the sports car segment.

To attract even more Chinese sports car drivers to the brand, the Stuttgart based company wants to set up so-called Driving Centres modelled on the Porsche Sport Driving School in Leipzig and the Driving Experience Centre in Silverstone. Steeped in tradition, the English race track is as popular with Porsche drivers as the spectacular circuit in Saxony. “Each Porsche embodies intelligent performance, because in addition to their high degree of everyday practicality, our sports cars enjoy the credibility of their excellent performance on the racetrack. In future our Chinese customers also will be able to experience this riveting performance on ideal test tracks – from a driving safety training course to a driver’s course with a racing licence,” said Bernhard Maier.

To celebrate the Chinese anniversary, Porsche is offering – along with numerous events – a genuine rarity: the “10 Year Limited Edition Anniversary” special model, restricted to a mere ten units, is based on the Porsche 911 Turbo S. The company has also announced an expansion of Asian motorsport. In 2011, the Porsche Carrera Cup Asia, already entering its eighth season, will be staged under the management of Porsche China.