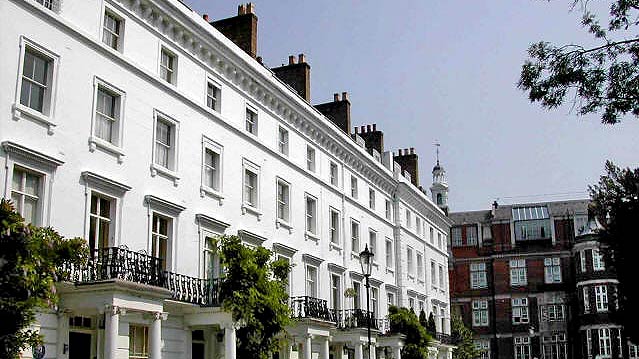 A combination of cooling measures in Asia and the threat of a double dip global recession has led to a slowdown in many housing markets in ‘new world’ economies, says international real estate adviser, Savills. This created conditions in the second half of 2011 that favoured the old world markets in a reversal of a five year outperformance by new world city markets. The top ten ‘world class’ cities saw values rise by just 1.0 per cent in the second half of 2011, according to the Savills World Cities Index, a slowdown from the 5.5 per cent seen in the first half of the year.  This brings total value growth to 6.5 per cent in 2011.

The Savills index measures a basket of properties, dubbed the “Savills Executive Unit*, representative of the dwellings needed to accommodate a small international business unit.  This allows for a true comparison of values across very divergent locations and markets.

“Modest growth levels in an uncertain world should come as no surprise,” says Yolande Barnes, head of Savills residential research.  “But the outperformance by the more stable ‘old world’ markets of London, New York, Paris, Sydney and Tokyo compared to the ‘new world’ markets of Hong Kong, Shanghai, Singapore, Moscow and Mumbai is a pattern we expect to be repeated over the coming year.”

“There is now clear evidence that the high performance, which saw new world markets grow by an average 95.4 per cent in the five years to June 2011, comes at the price of higher volatility,” says Barnes.  “It is ironic, then, that wealth generation in the new world has created a flow of investment activity from East to West in search of wealth preserving safe havens and this is now underpinning values in the world’s most established old, ‘world class’ city markets.”

How the cities rank – Paris in the ascendancy 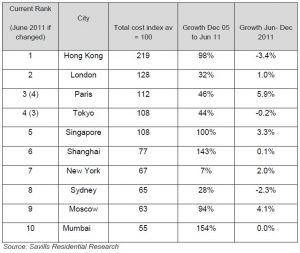 The variance in growth over the past six months has already impacted the rankings within the top 10 rankings in the Savills index, with the sharp 5.9 per cent growth in the second half of 2011 meaning that Paris leapfrogged Tokyo to take third place in the cost rankings behind Hong Kong and London.

New world volatility
Hong Kong remains well ahead as the most expensive city in the world in which to buy real estate – with the cost of the executive unit almost twice that of London.  But it also stands out as the most volatile city market in the index, falling by -3.4 per cent in the second half of 2011, having risen by 87 per cent between December 2008 and June 2011. In contrast to the old world markets, particularly London and Paris, investor confidence in the city’s luxury residential market cooled dramatically in the second half of 2011.  Shanghai value growth has also slowed dramatically and is not expected to escape further falls.

Moscow stands out as a new world trend bucker, with half year growth of 4.1 per cent.  Meanwhile, Mumbai values look set for a correction, having more than doubled over the past five years, with falls of between 10-15 per cent considered possible in 2012.
This trend may well be echoed in other cities that have previously experienced rapid price growth and now look fully valued.

Old world stability
The majority of the old world cities continued to show growth in the second half of 2011, with Paris showing a sharp 5.9 per cent uplift, the effect of safe haven seekers looking to shelter their wealth in a relatively stable asset class.

Barnes explains: “We think that the old world cities – particularly those long established as safe deposits of wealth such as London, Paris and New York especially,  may sustain pricing over the coming year, with the influx of global wealth in an uncertain world still having some time to run. “New York is a city to watch.  It recorded growth of 2.0%, correcting first half year falls.  Its residential real estate now looks extraordinarily good value and a relatively stable ‘buy’ opportunity within a global investment context.”

Super prime outperforms – but not in Hong Kong
Footloose global billionaires have weathered the latest round of global economic uncertainty better than many.  New billionaires continue to be created in emerging markets, led by China.  As a consequence, the value of billionaire property held up better than property occupied by the Savills executive unit – recording growth of 3.6 per cent in the second half of 2011. The notable exception is Hong Kong, where billionaire property fell by -5.9 per cent.  The city’s red-hot ultra-prime districts, The Peak and Southside, have cooled following price growth of 118 per cent between December 2008 and June 2011.  Buyers are exercising caution ahead of anticipated price falls, and are seeking discounts on asking price.  Such measures were unheard of just six months previously, and may indicate the market to come.