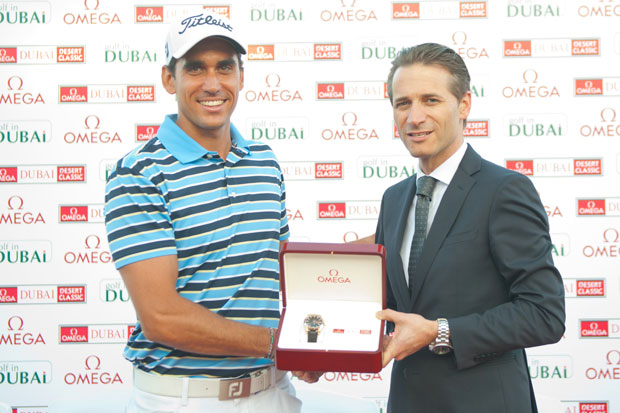 This year’s edition of the Omega Dubai Desert Classic golf tournament boasted a stellar roster that included three of the world’s four top-ranked golfers. The stars didn’t disappoint: at the end of the third round, Rory McIlory, Lee Westwood and Martin Kaymer, who entered the tournament ranked second, third and fourth in the world respectively, were in the leaderboard’s top ten. But it was Spain’s Rafael Cabrera-Bello who won by a single stroke over Westwood and Scotsman Stephen Gallacher. Cabrera-Bello, who had been a stroke behind Westwood overnight, birdied the 17th hole and was able to hang on to his lead. 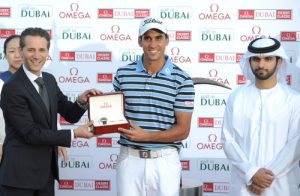 Cabrera-Bello was presented with the Omega Dubai Desert Classic trophy by His Highness Sheikh Mansoor bin Mohammed bin Rashid Al Maktoum and Raynald Aeschlimann, Vice President and International Sales Director, Omega, the tournament’s title sponsor, in the fiercely contested European Tour event.   The prestigious 18 Ct red gold an Omega Seamaster Aqua Terra Annual Calendar was presented to Cabrera-Bello along with the tournament trophy, following a tournament that saw one of the most dramatic European Tour finishes of the season. “We are particularly proud to present this timepiece to a winner as worthy as Rafael,” said Aeschlimann. “I know that when he wears it, it will bring back memories of his extraordinary performance at this tournament.”

The watch presented to Cabrera-Bello is an Omega Seamaster Aqua Terra Annual Calendar with an 18 Ct red gold case and a brown leather strap. The date only needs to be adjusted once a year, on March 1st. It is delivered with a four-year warranty and is water-resistant to 15 bar/150 metres/500 feet.  The exclusive Co-Axial calibre 8611 is a member of the mechanical watch movement family that has signalled a revolution in the way mechanical wristwatches are being made.

Omega is one of the most prominent watch brands in the world and has long promoted golf as a global sport.  Its title sponsorships include the Omega European Masters played each September in Switzerland. In 2011, the brand entered into a partnership with The PGA of America and will serve as official timekeeper to The PGA Championship, one of golf’s four “Majors,” and the Ryder Cup when it is contested in the United States. Omega is also among the world’s leading sports timekeepers and in 2012 will assume its Official Timekeeping role at the Olympic Games for the 25th time since 1932.