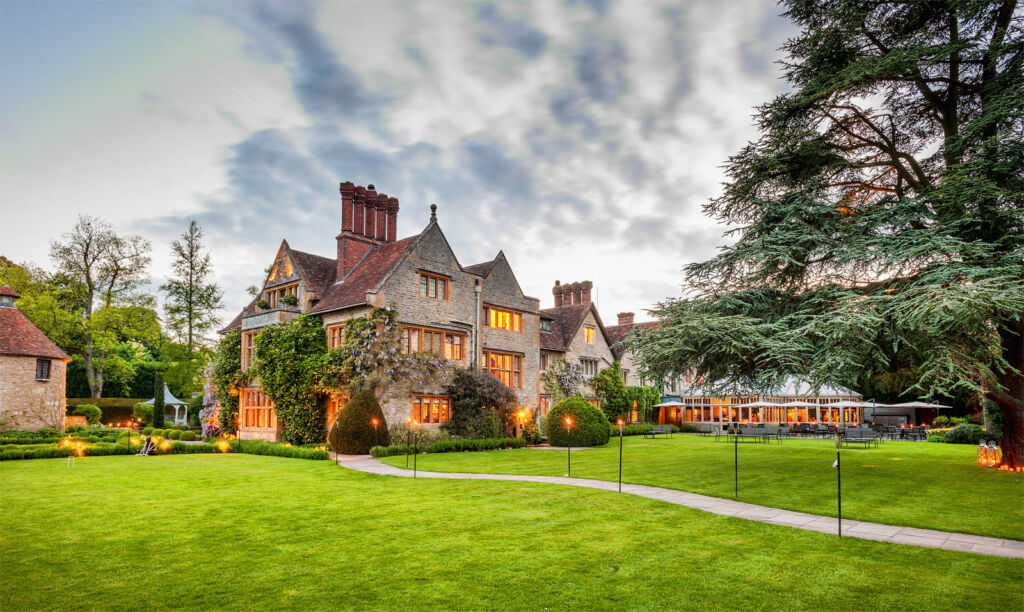 Renowned the world over for its gastronomic excellence and impeccable service, Belmond Le Manoir aux Quat’Saisons has been at the top of my wish list for decades. As we drive through the wrought iron gates of Chef-Patron’s Raymond Blanc’s 2 Michelin-starred hotel-restaurant. My best friend and I are wide-eyed with excitement at this dream made manifest. 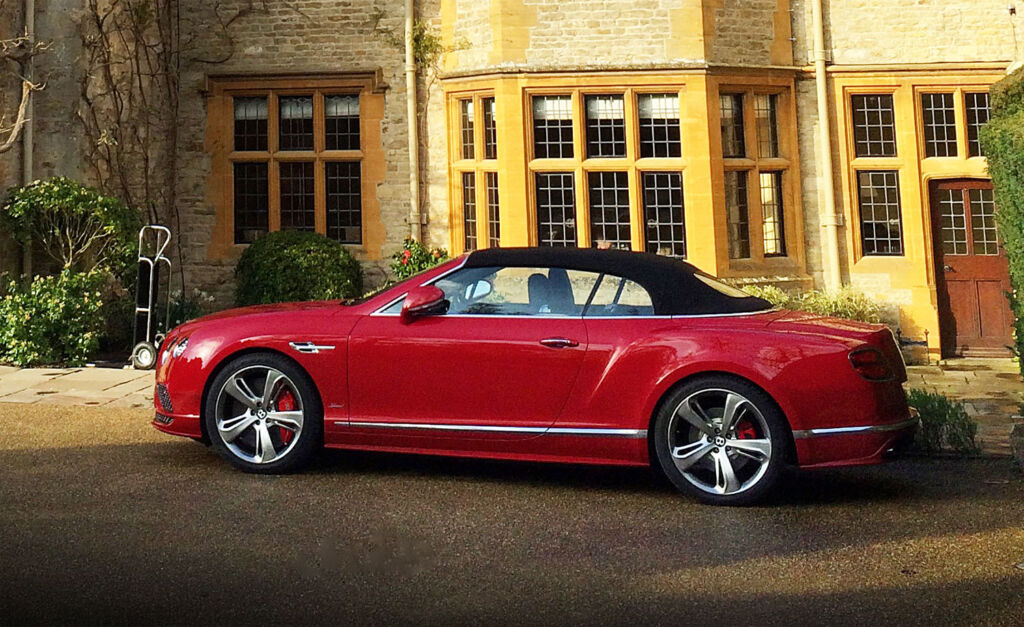 We are warmly greeted by Chris, our sartorially elegant front-of-house, who divests us of our keys (Bentley Speed) and luggage. And, with a broad smile guides us inside the Cotswold stone Manoir towards the beautiful lounge area. Gorgeously French-accented staff serves tea (sublime Early Grey from Mariage Frères) and tangy lemon cake. We sink into expensive sofas. We are très très contents.

There has been a house here since the 16th century and the land once housed a medieval abbey. This could partly explain my almost immediate calm. The tranquil energy in the lounge is palpable; the service impeccable without being patronising. I feel incredibly ‘at home.’ 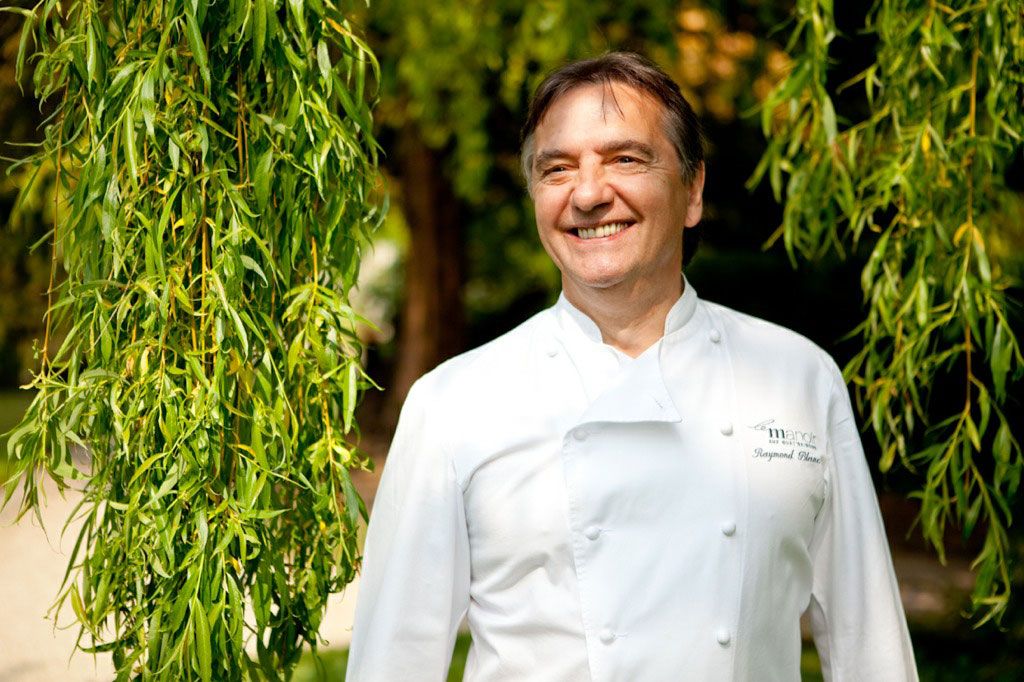 Raymond Blanc OBE, honorary Brit, proud Frenchman, and simply ‘RB’ as some of his staff affectionately call him, is Le Manoir. A British national treasure, this inspiring gastronomic visionary from the Franche-Comté region, bought the house in 1984 from Lady Cromwell, who was so enamoured with the young French chef, she not only sold him the manor and grounds (some 10 hectares) but also championed his planning application for change of use.

The hotel was awarded two Michelin stars in 1985, just a year after opening, and, remarkably, has held them ever since. An astute businessman, Raymond made such a success of his venture he later sold a majority share to Virgin, who eventually sold it on to Orient Express (now rebranded as Belmond). 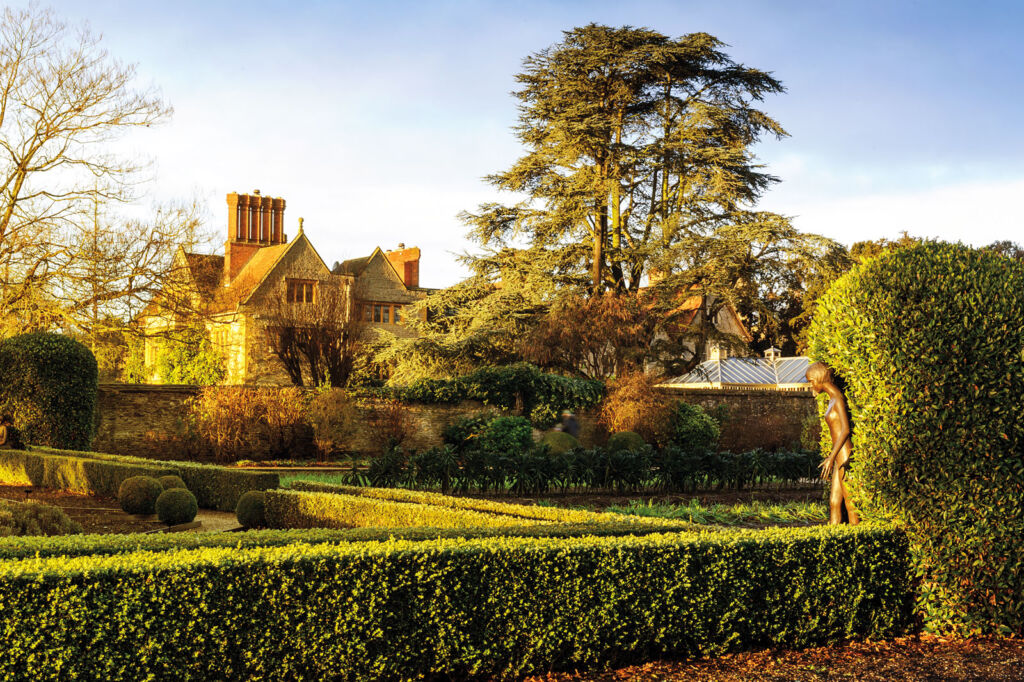 A sit down chat with Jan-Paul Kroese

General Manager Jan-Paul Kroese joins us for tea and I ask him the secret of Le Manoir’s continued success?

“We always try to be of service without being obsequious,” he tells us. “We find out guests’ preferences before they arrive and we train our staff to anticipate, to observe and serve – according to the individual guest’s needs. And although Belmond is a large corporate, we still retain a sense of intimacy.”

And how does he manage guests’ expectations?

“Some guests love a lot of attention, while others want to be left alone. We train our staff to adjust accordingly and allow for flexibility with each guest. “When we set high standards, as we do here, guests’ expectations are also high, so our aim is to fulfil and even exceed them.” 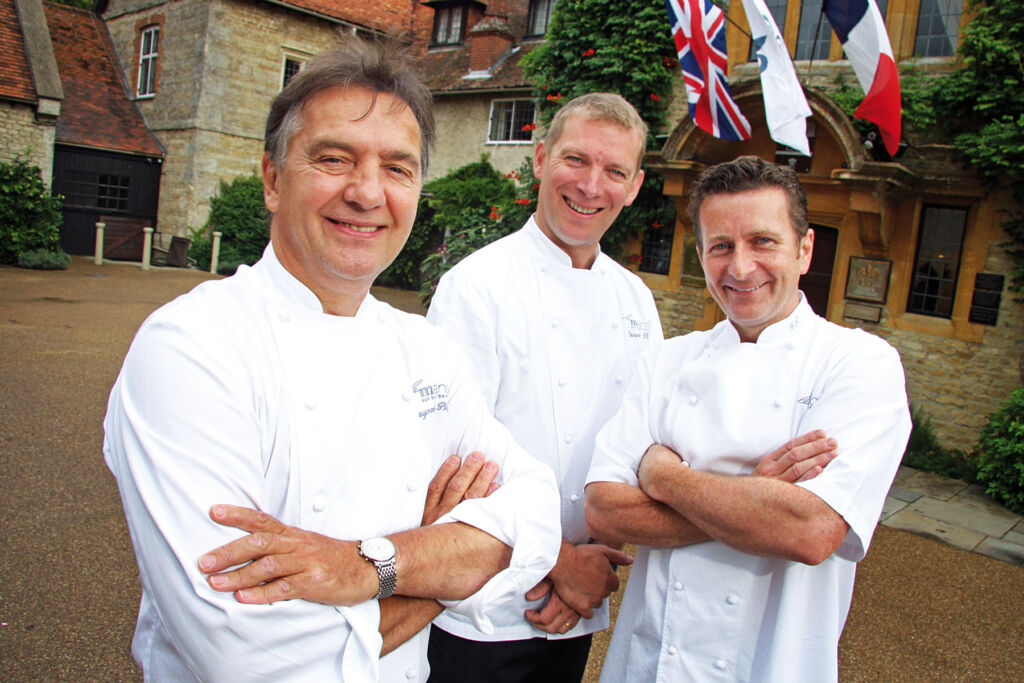 Executive Chef Gary Jones has been Raymond’s right hand man in the Manoir kitchen for many years, giving his Chef Patron the chance to work on other aspects of his business empire.

“We are honoured to have still retained 2 Michelin stars since 1984. Raymond can rely on Gary to maintain that standard of excellence,” says Jan-Paul. 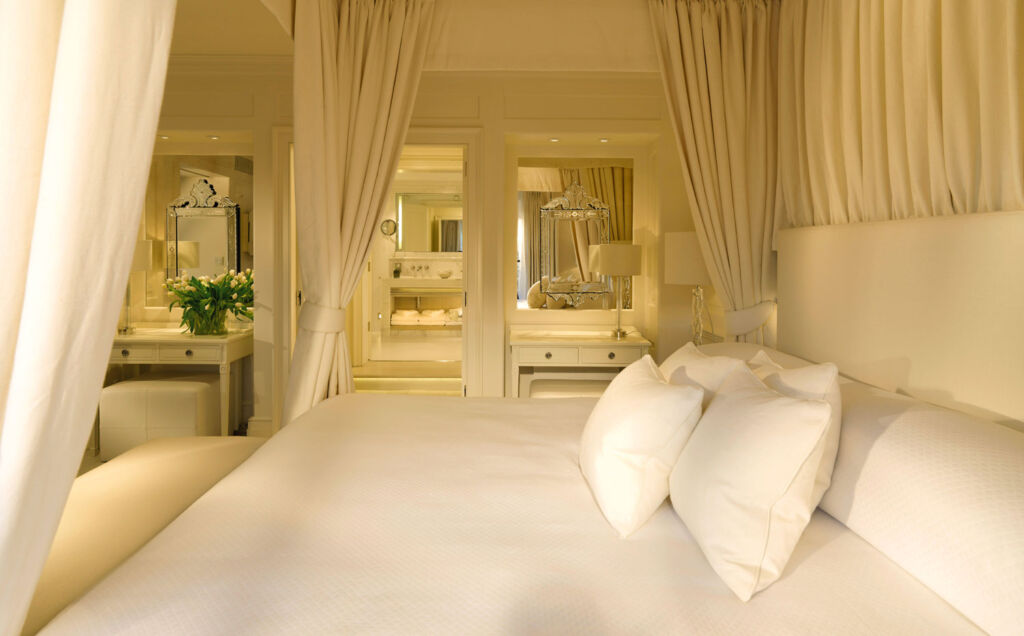 Le Manoir has 32 individually designed rooms: 17 in the main house and a further 15 in the adjacent courtyard. The unique décor of each room is inspired by Raymond’s travels around the world, each with extraordinary attention to detail. The Provence and Lavender suites have a strong French accent, the Blanc de Blanc is very white and chic, while the Jade suite has a beautiful Oriental design and ambiance and the Lace? Ah, the Lace Suite… We are taken across the courtyard, past the 15th-century dovecote – now a single suite – up to a seductive loft-style space that looks like a set from a Bond movie. 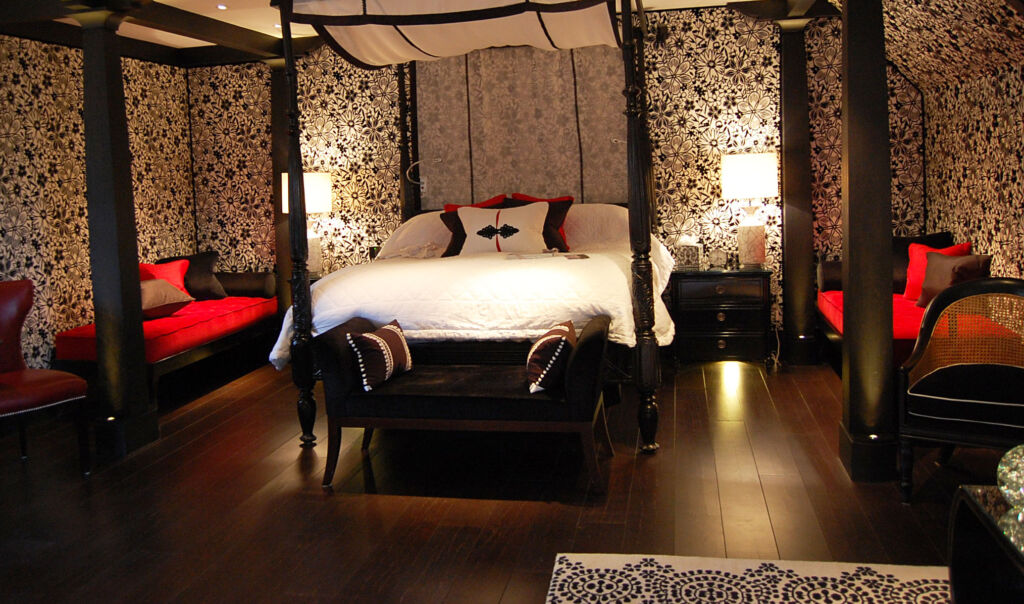 The colour scheme is black and white with red accents: a plush white-canopied four-poster waiting invitingly between two seductive red chaise longues. A feast for the senses, this space is black, white, red, hot! Textures of lace, rich velvets and crushed silk complement the suggestive black and white prints on the walls, while the monochrome theme continues into the capacious bathroom. 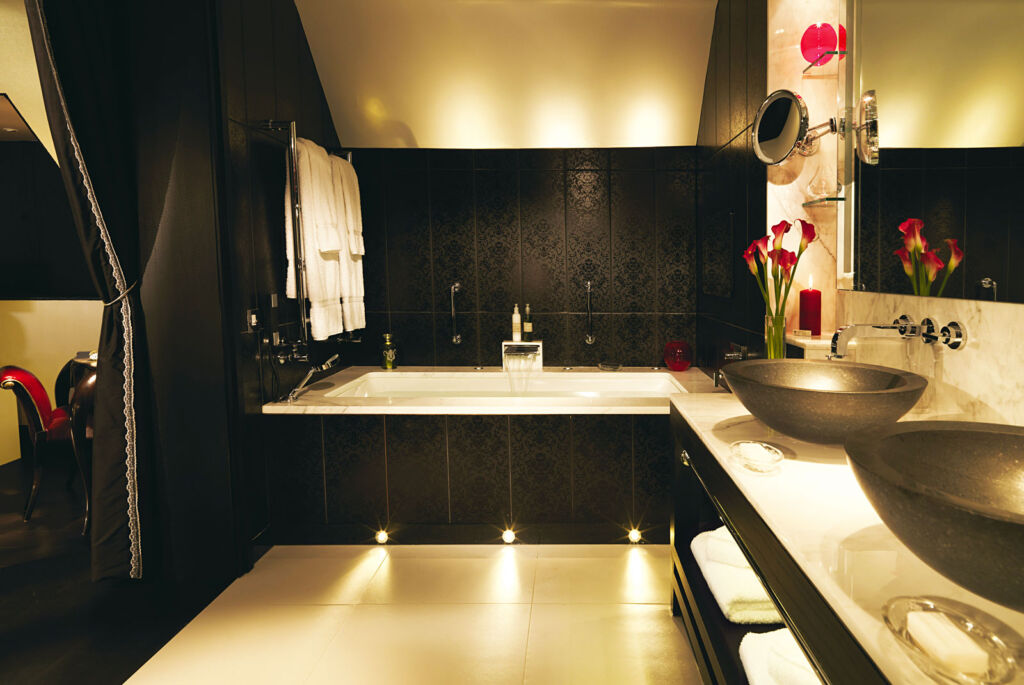 Separated from the living quarters by rich silk curtains, the bathroom area offers guests a deep luxurious tub and a shower-sauna, replete with essential oils. The TV descends remotely from the ceiling and rotates a full 180 degrees, which means you can watch it from the sofa area, the desk or the dressing table. I look out from this eyrie to beautiful views across the manicured lawns to the ample vegetable gardens. This is surely heaven on earth, serenaded with birdsong.

An eclectic fruit plate, a decanter of Madeira wine (a nod to Belmond’s Reid’s Palace in Funchal), divine petit fours and sugared almonds are just a few of the treats placed invitingly around this sumptuous suite. Attention to detail is astonishing – it was a wrench to leave this sensual sanctuary for a pre-dinner exploration of the gardens.

A short walk in the gardens

As we walk I’m amused to see the French tricolour saluting us from flagpoles on the honey-coloured walls of Le Manoir. Wry reminders that although we are in the most quintessential of English country houses, the culinary accent here is firmly French. Such is Raymond’s expertise and passion for his craft, he has trained no less than 30 Michelin Star chefs (Heston Blumenthal and Marco Pierre White among them) and continues to champion the British food revolution taken up by Jamie Oliver. Indeed a new TV series Raymond is making will focus on the nutrition (or lack of) in most of our supermarkets, encouraging a return to local provenance and sustainability. 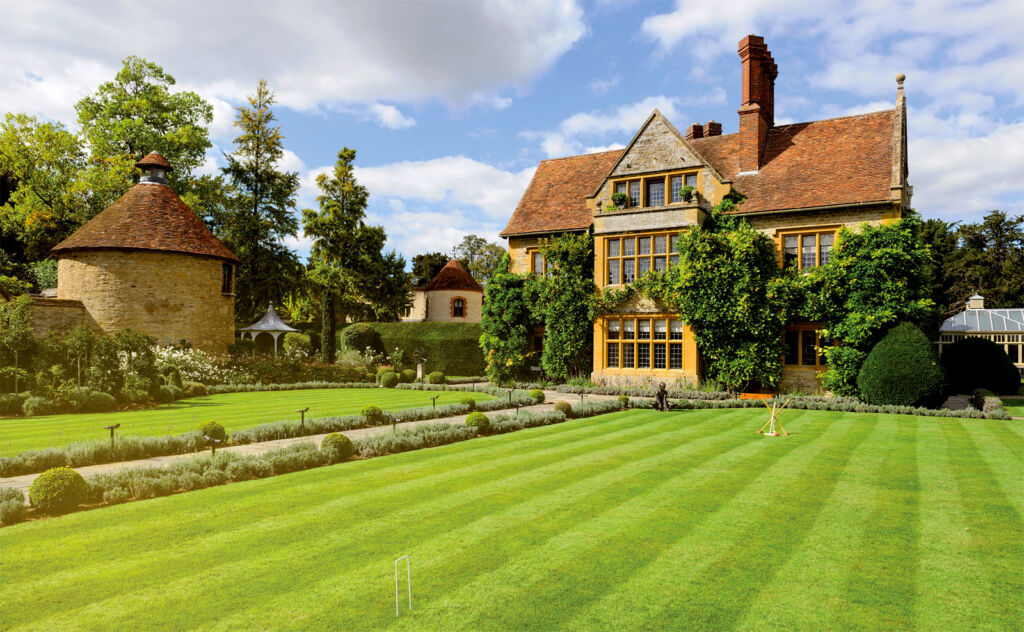 We leave the mature trees and immaculate lawns lined with Provençal lavender and head for the walled kitchen garden with its row-upon-row of vegetables (apparently 90 types). The immense 100% organic potager covers two acres and supplies Le Manoir’s kitchen and cookery school with fresh salads and vegetables from spring to autumn.

Head gardener Anne Marie Owens has been at Le Manoir aux Quat’Saisons since the beginning, and has said that if her boss hadn’t been a chef he would “probably be a gardener” such is his love of the earth and its provenance. Raymond’s appreciation of distinct exotic flavours means you’ll find vegetables from South East Asia here, while one corner is devoted entirely to a mushroom valley with edible fungi including shiitake, maitake and parasol. 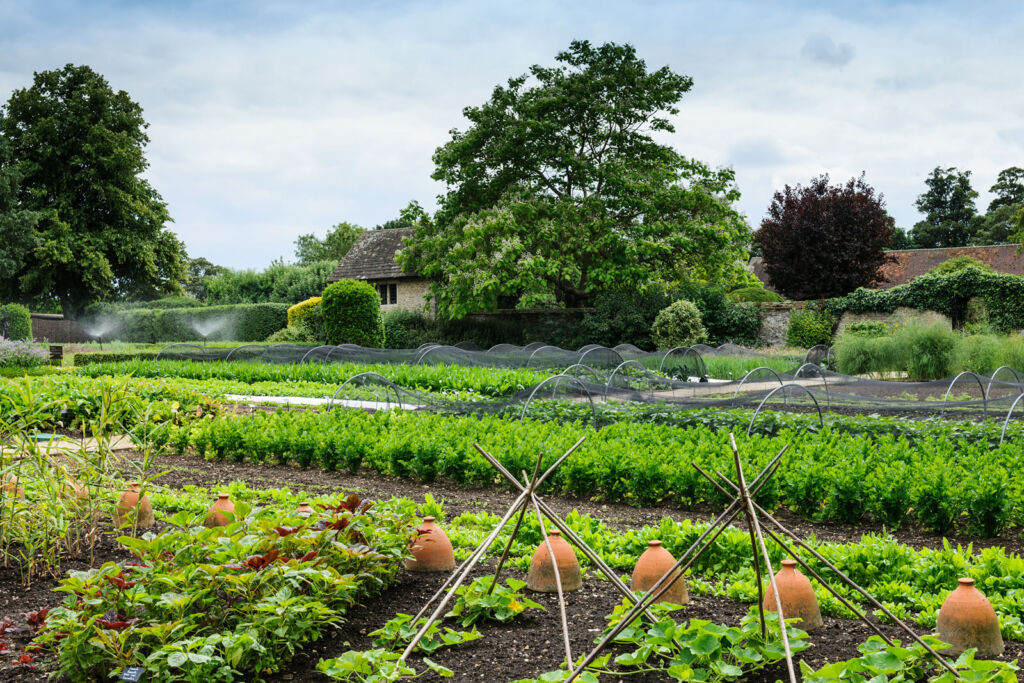 Wander among the Maman Blanc herb garden – with its emphasis on micro herbs – then up to the wildflower meadow, before making your way to the 15th-century pond with its flying bird sculptures and follow the path leading to the sublime Japanese water garden. Clearly an inspiration from Raymond’s Far East travels, the Japanese tea garden, created by designer Robert Ketchell, is a delightful sanctuary with its very own teahouse. 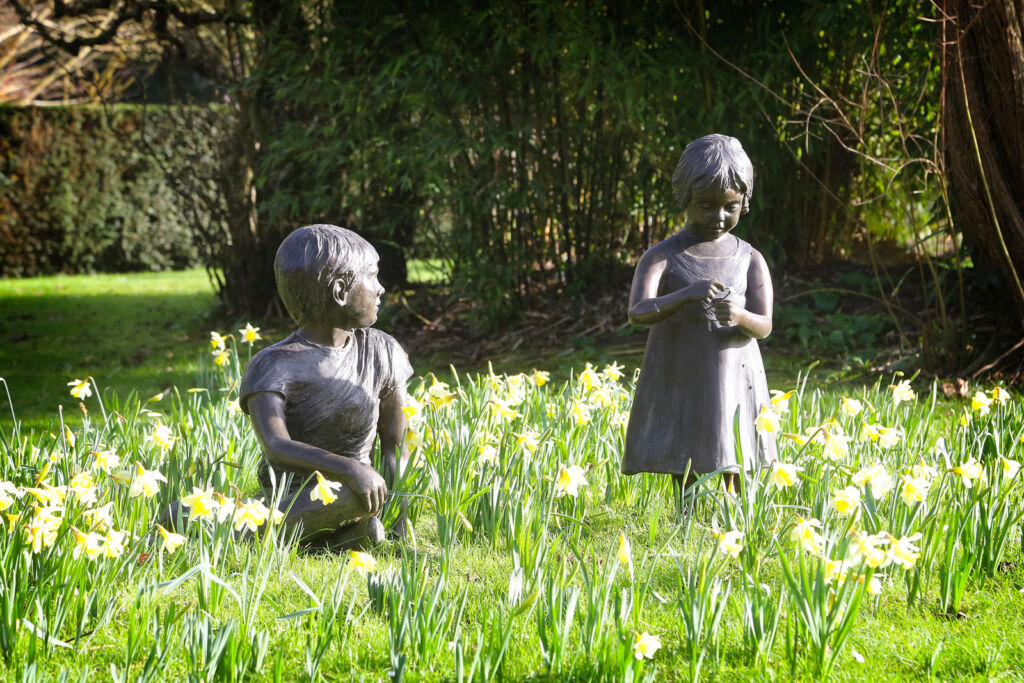 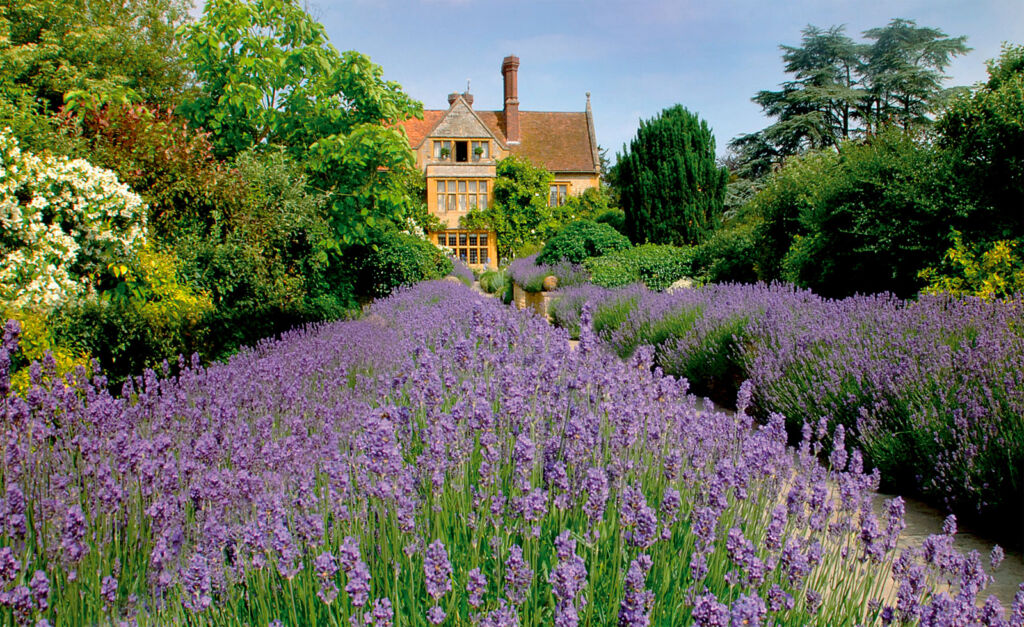 You could easily take an entire day enjoying this earthly paradise, but the main reason we are at Le Manoir is to enjoy Raymond’s Michelin-starred menu – which he offers to as many as 260 guests a day.