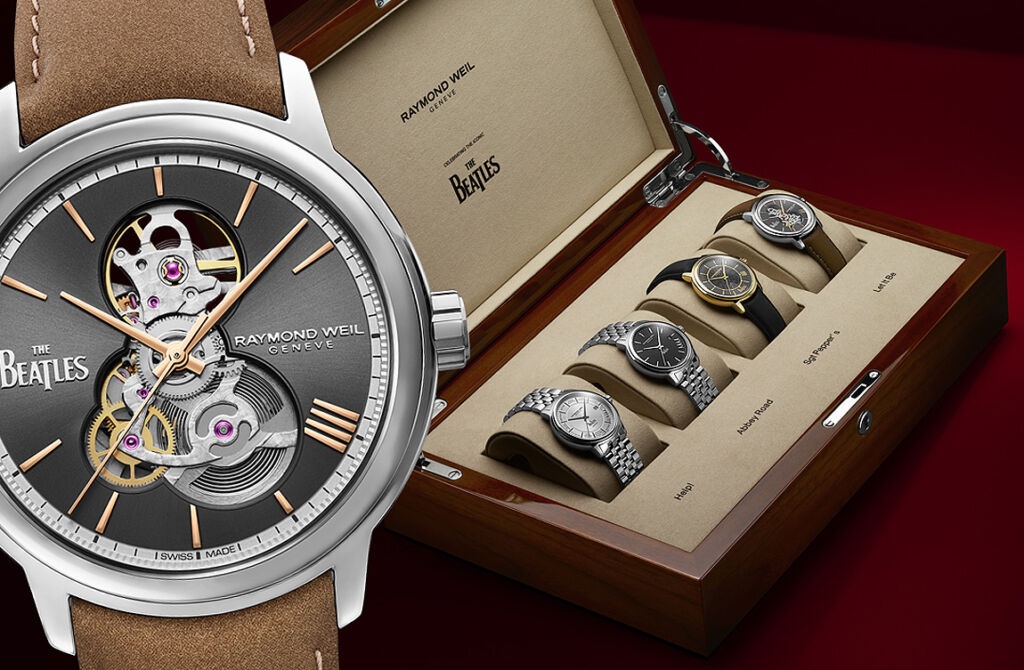 The luxury Swiss Watchmaker Raymond Weil has brought together the Fab Four. Sadly not The Beatles but a collection of four watches celebrating the greatest and most successful band of all time. Jeremy Webb didn’t need any ‘Help’ with looking at this gorgeous set.

I grew up in the 1970s, just after the world’s biggest band, The Beatles, broke up, but as we know, their legacy remains as strong as ever, and they’re still a shoo-in for the top spot when anyone discusses who the most influential band of all-time is. I still enjoy listening to their music to this day, and it was an absolute treat for me to investigate this Beatles watch collection from Raymond Weil.

The four timepieces that make up this collection were launched separately after Raymond Weil secured a partnership with Apple Corps, the company established by The Beatles. 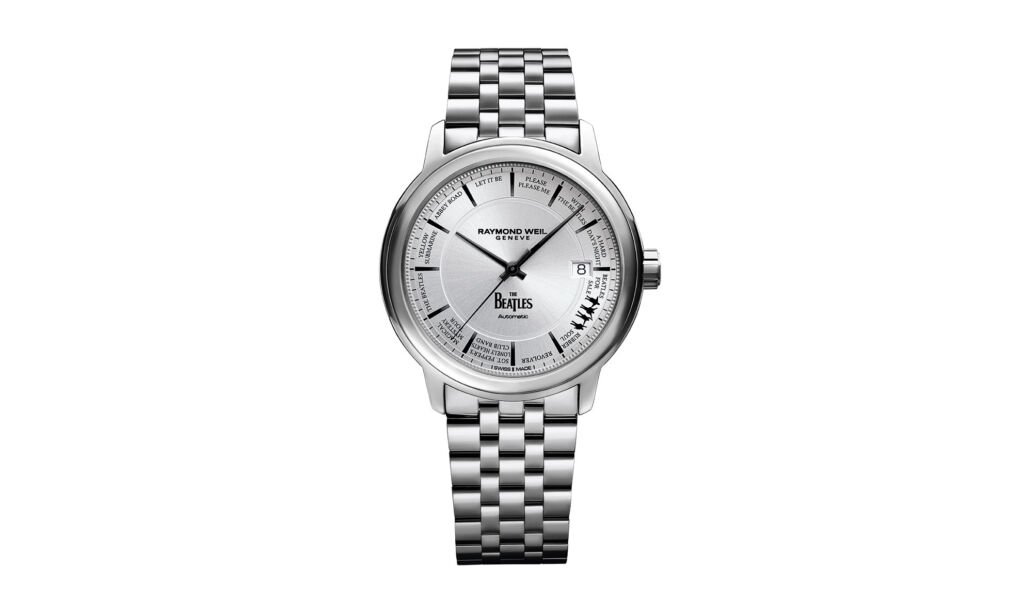 The first watch to be made available was the maestro 2237-St-Beat1 in 2016, adorned with a silver dial showcasing Beatles album titles located around the hour track. In the lower portion of the dial, the official Beatles logo sits proudly and at four o’clock, the Fab Four spell out “Help”. This model is limited to three thousand timepieces. 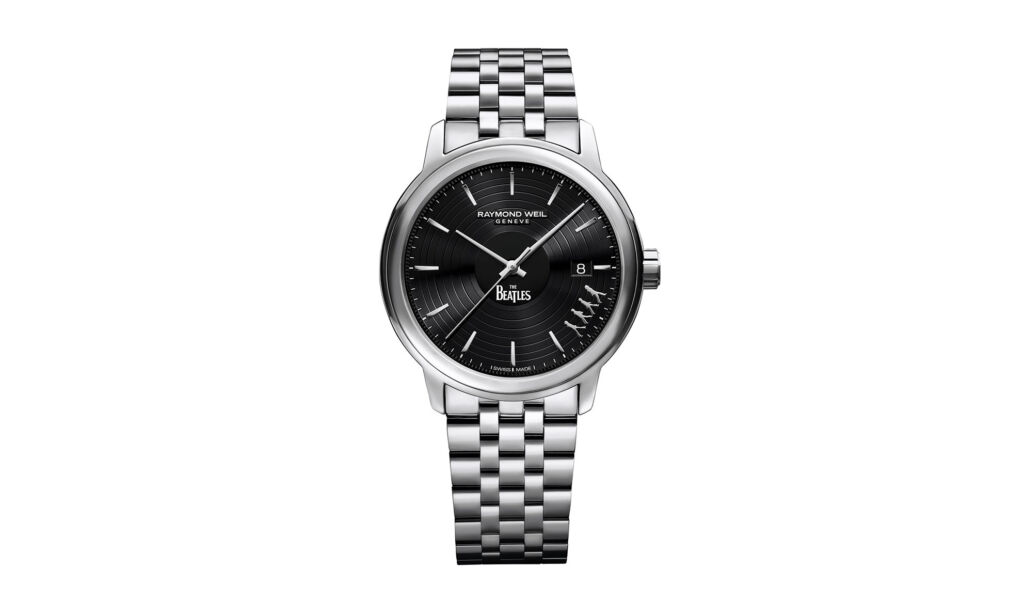 In 2017 the maestro The Beatles “Abbey Road” Limited Edition was created again with only three thousand watches available. A 39.5mm, stainless steel case wraps around a black dial like a vinyl record. The Beatles logo is beneath the fulcrum of the dial, and the iconic Abbey Road silhouette sits at 4 o’clock. 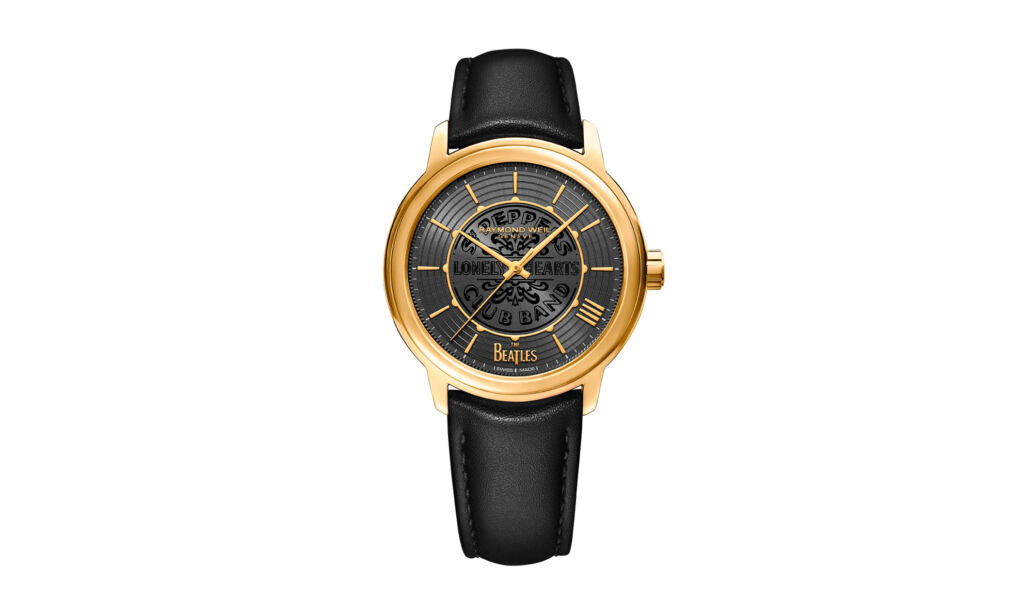 Two years later, the maestro The Beatles “Sgt Pepper’s” Limited Edition appeared slightly larger at 40mm in diameter. The drum motif on the dial is a replica of the “Sergeant Pepper” album cover. The owner gets a yellow gold case connected to a vegan leather strap, a first for Raymond Weil. At the six o’clock position, you see the iconic Beatles logo features.

For the final watch in the range, Genevan Maison employed its expertise for making open watches, revealing to the wearer the regulating organ, spring barrel and a plethora of other parts usually hidden from view. the “Let it Be” maestro with a 40mm stainless steel case connected to a vegan strap. Consistent with the three other Beatles models, the band’s logo appears but this time at nine o’clock. 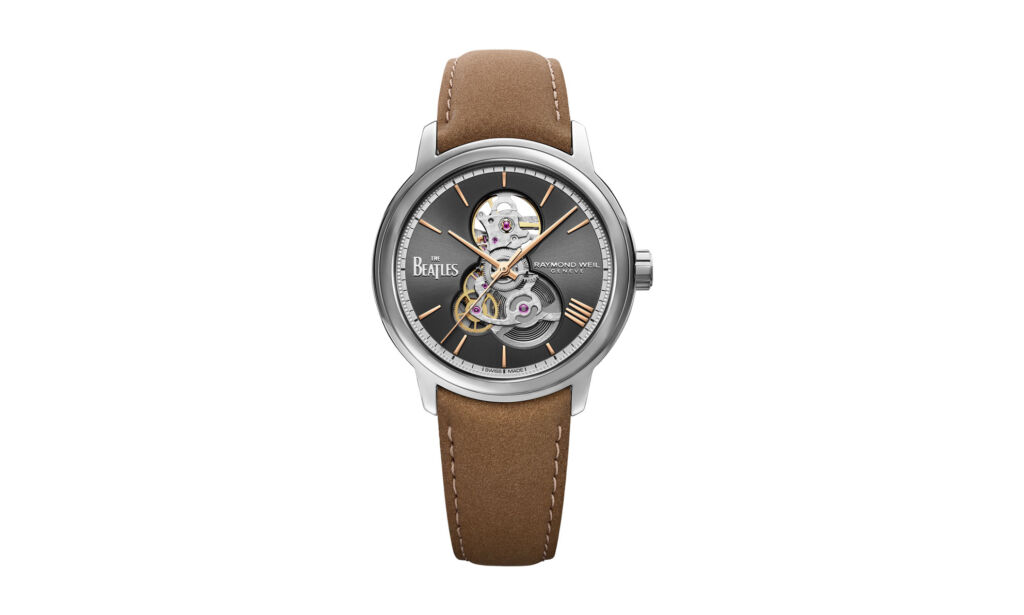 When launched, each of the four Beatles models was limited to just three thousand pieces. The company retained the first example of each model, all bearing the same serial number, ‘0001’. These now feature within the four-part set, conferring an unprecedented degree of exclusivity.

After producing four successful limited-edition watches honouring the work of the world’s most famous band, The Beatles, Raymond Weil now offers a unique collection of all four Beatles models. The sale will benefit the music charity Nordoff Robbins.

About Nordoff Robbins
In 1974, training in the Nordoff Robbins’ approach to music therapy formally began. It is now the UK’s largest music therapy charity.
They believe in the value of music for all people in society, and use the power of music to help enrich the lives of people affected by feelings of isolation, mental illness, life-limiting physical and disabilities.

Nordoff Robbins provides a range of sessions designed for children and adults, many delivered in London, Manchester, Newcastle and Scotland. This array of services ranges from specialised one-to-one music therapy to group sessions.

Music Therapy is a recognised health and therapeutic intervention. It is particularly impactful for those living with significant challenges. The charity’s therapists are highly skilled musicians trained to an exceptional standard. The therapists work with people, engaging with their unique musicality, to support their development, recovery, health, potential and wellbeing.

The Raymon Weil Beatles Collection – Where and How?

The four-piece collection will cost 20,000 CHF, and Raymond Weil will donate 100% of the sale proceeds to the UK’s largest music therapy charity, Nordoff Robbins.

To find out more about other Raymond Weil timepieces and collections visit, https://raymond-weil.co.uk.