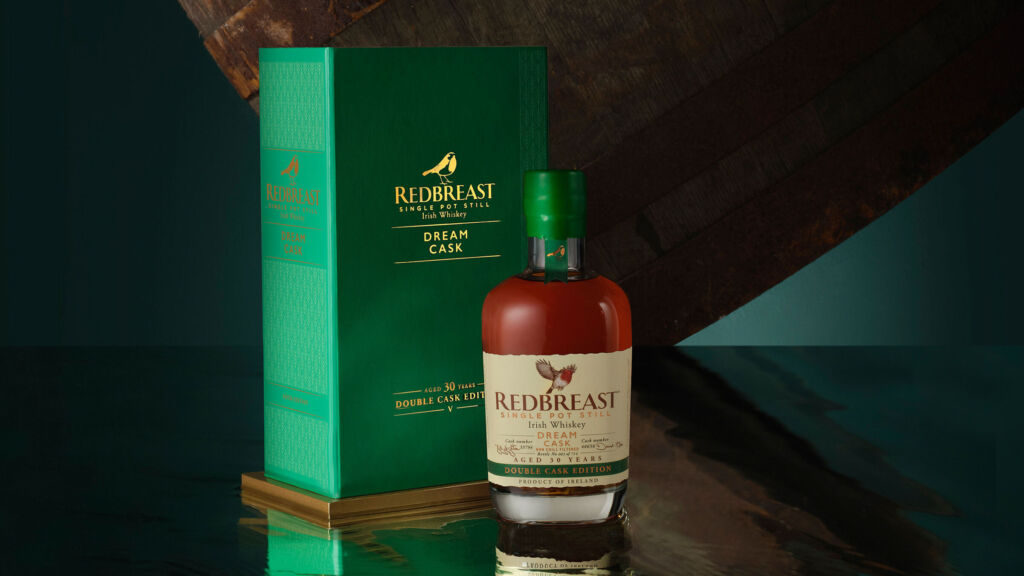 In celebration of World Whisky Day, Simon Wittenberg attends a virtual tasting hosted by Redbreast’s Master Blender Billy Leighton and Blender Dave McCabe. By doing so, he became one of the first in the world to sample the fifth release in Redbreast Whiskey’s coveted Dream Cask series.

Redbreast’s Dream Cask series debuted in 2017 when the whiskey was initially unveiled during a Facebook Live tasting event to commemorate World Whisky Day that year. It proved a real success, so much so that many viewers and participants requested that the Dream Cask expression be made available for sale.

Master Blender Billy Leighton took this feedback on board, and in 2018, the first edition in Redbreast’s limited edition Dream Cask series made its debut, a 32-Year-Old single pot still Irish whiskey, which had been laid down in ex-bourbon barrels before being transferred into a first-fill Oloroso Sherry butt. 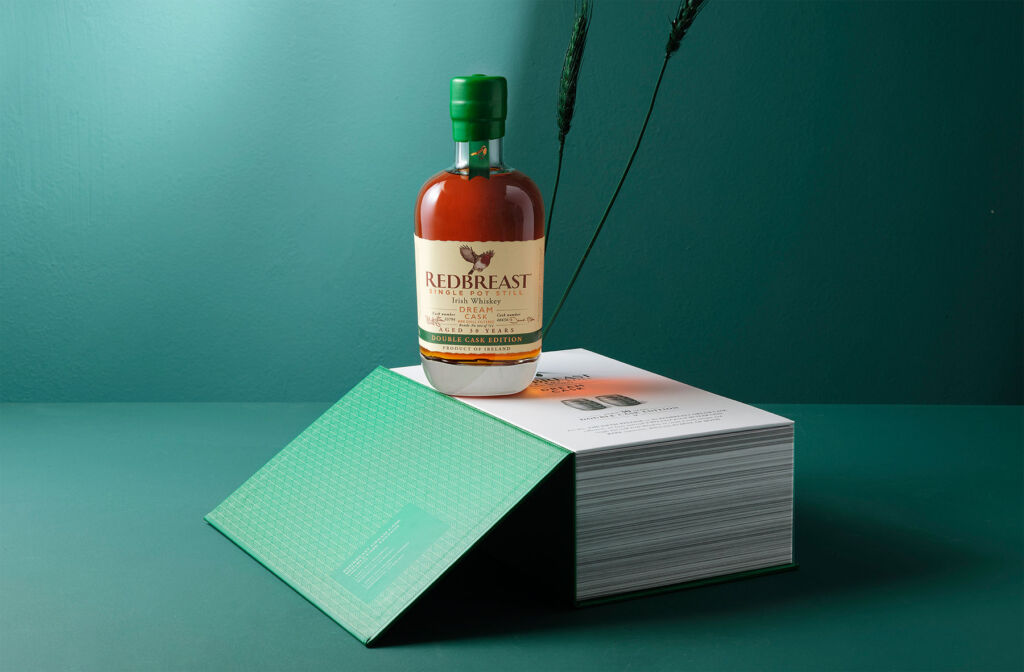 Only 816 individually-numbered bottles, priced at €500 each, were made available at the time via Redbreast’s online Birdhouse members’ club and sold out within hours. Highlighting its exclusivity, there was a winning bid of €3,600 for the 32 Year Old on one auction site last year.

The 2019 Dream Cask Pedro Ximenez Edition, which used whiskeys aged between 20 and 33 years of age, proved another roaring success. All 924 bottles, costing €380 each, were gone in less than 15 minutes, with customers hailing from many parts of the globe.

2020 saw a change of direction for the third edition, as this was the first time that Port casks had been used, and the Ruby Port Wood edition, a 28 Year Old, also marked the first time that a bottling in the Dream Cask series was made available to buyers through an online ballot system, which remains the case today. Thousands of people registered to take ownership of one of the 912 bottles on offer, such was the demand.

Last year, it was the turn of Redbreast’s Dream Cask Oloroso Sherry Edition to once again mark World Whisky Day, an expression that brought together four special whiskeys aged for a minimum of 29 years in ex-Bourbon, Sherry and Ruby Port seasoned casks.

And now to the arrival of the fifth edition in the Dream Cask series, which we were fortunate enough to try in the company of two men who were responsible for crafting the latest limited edition for World Whisky Day 2022 on 21st May. 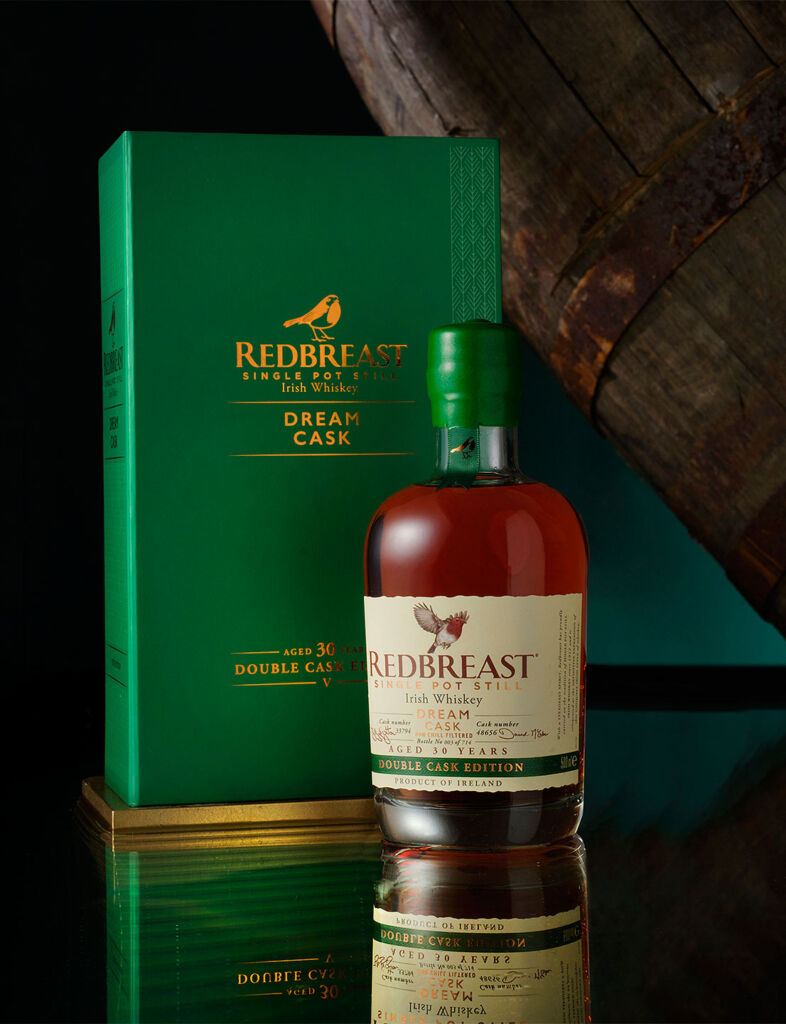 Named the Redbreast Dream Cask Double Cask Edition and breaking ranks from what had been created previously for the collection, this exceptional 30-Year-Old is the result of the coming together of two single pot still Irish whiskies hand-selected by Master Blender Billy Leighton and Blender Dave McCabe, from the inventory at the Midleton Distillery in Ireland’s County Cork.

Billy Leighton chose cask number 33794, a first fill Oloroso Sherry butt laid down on 16th May 1990, the same day that Eugene Stoner and Mikhail Kalashnikov, the creators of the M16 rifle and the AK-47, met face-to-face in Washington, D.C, USA. The second cask forming the fifth edition (48636) had been lying undisturbed since 12th November 1991. Both were deemed to be of optimum maturity in terms of their flavours and perfectly reflected Redbreast’s DNA. Both casks were also only married at their point of bottling, rather than being finished in other barrels.

On to the taste, and this is where the expression truly comes alive, where notes of dark roasted coffee, honey-menthol and sweet liquorice come to the fore, complementing the pot still spices. Orange peel and smoked almonds add their own unique and subtle touch. The finish is long and satisfyingly rich, with the precise balance of fruits, spices and oak lingering until the very end. 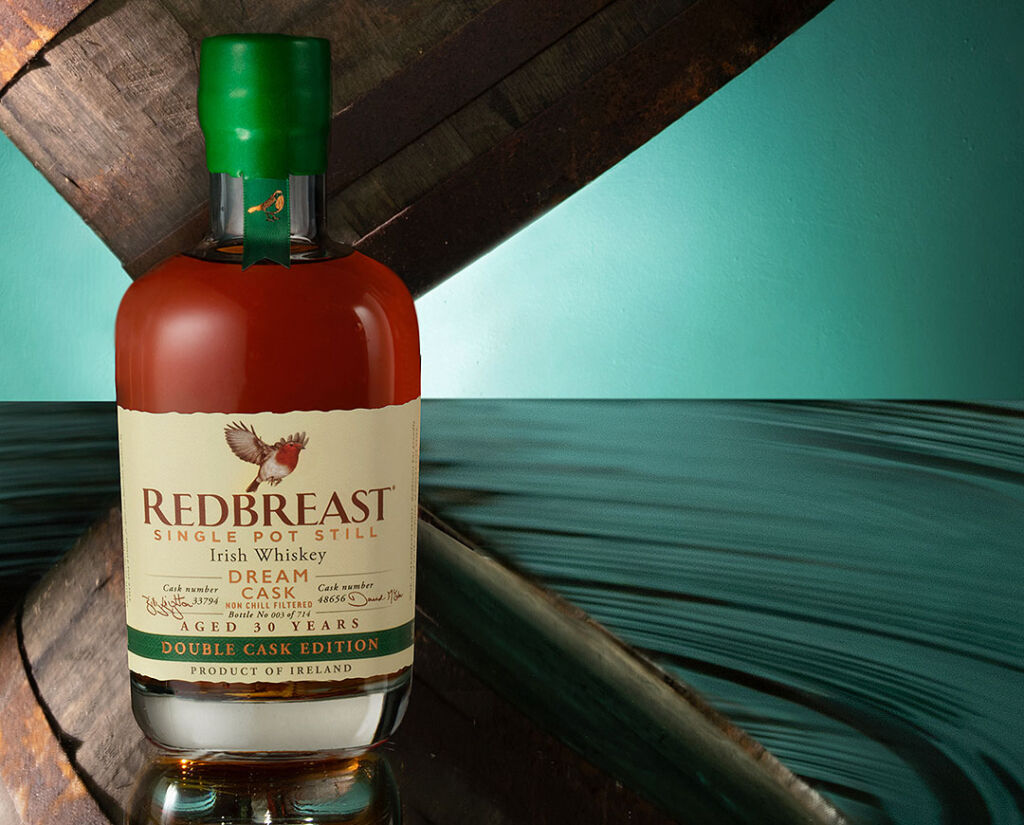 You would have thought that using two barrels to create a single cask would result in plenty of liquid for whisky lovers, but with more than three decades passing, some, unfortunately, passed to the angels, thereby delivering 714 500ml bottles priced at €550 each. The label is adorned with the signatures of Leighton and McCabe, and every bottle is housed in a beautiful green box with a keepsake book detailing the latest chapter in the Dream Cask journey. 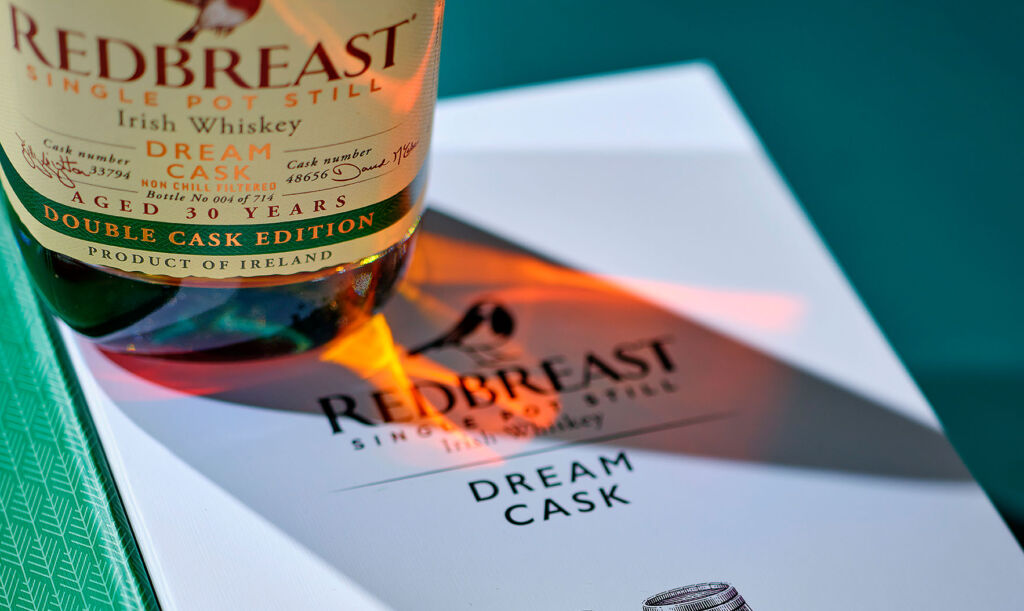 From 23rd until 30th May 2022, the ballot will be welcoming entries on Redbreast’s online members’ club, “The Birdhouse”, from Australia, China, Japan, New Zealand, the Republic of Ireland, Singapore, South Africa, Switzerland, England, Scotland and Wales.

Unfortunately, whisky aficionados and Redbreast fans in the US will not be able to enter the ballot. However, as seen with the previous editions, it is highly likely that some bottles will make their way onto the major auction sites and command higher prices than the RRP.

Redbreast Dream Cask Double Cask Edition – Where and How?