Following my recent interview with Philippe Magrez, Bernard Magrez’s son, I was invited to experience a wine tour in Bordeaux like no other.

To recap, Bernard Magrez is known as the ‘composer of rare wines’. He is the owner of 40 vineyards, 18 of which are in the Bordeaux region of France, whilst 8 are in Languedoc-Rousillon and in Provence and the remaining 10 vineyards are in locations as far flung as Japan, Uruguay and Napa, California. He is also the owner of four Grands Crus Classes / wine estates in the most prestigious Bordeaux appellations: Château Pape Clement, Château Fombrauge, Château La Tour Carnet and Clos Haut-Peyraguey.

Since discovering all that Bernard Magrez stands for and what he has acquired and accomplished, I was naturally anticipating nothing less from the leading signature wine producer in France. Yet Bernard Magrez and his team managed to go further and beyond to exceed all expectations during our stay.

First off, we were greeted at Bordeaux airport by a pair of chauffeur-driven supercars to escort us to our château in luxury and style: an ultra modern black Rolls Royce and a vintage blue Bentley – the latter of which was once owned by James Bond author and character inventor, Ian Fleming.

A short ride later and we stepped out on to the expansive and religiously historic grounds of Magrez’s Château Pape Clement – our very own private wine estate to honourably call home for the next few nights.

Famished from the journey, we were each presented with a delectable picnic hamper, filled with a selection of gourmet sweet and savoury treats including friands, truffle infused ricotta cheese and mixed berries floating in a jar of lavender syrup. Of course, no wine tour experience would be complete without the accompanying tipple, so we enjoyed a fine selection of chilled white, rosé and red wine during almost every meal. 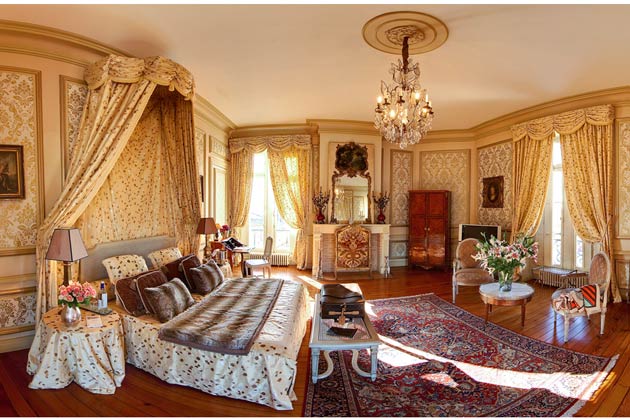 Full from lunch, we were taken up to our rooms, all of which are immaculately maintained and beautifully furnished with either French modern designs or a traditional take to charmingly reflect Bernard Magrez’s passion for music, art and culture. Each suite is extremely warm and inviting, with the true feeling of staying in a historical, palatial building but with the added touches of modern unprecedented luxury thrown in for good measure.

So, our trip continued with similar lavish yet wholehearted courtesy, with a wine tour around Château Pape Clement to learn more about the process, spanning from the growing of grapes (with acres of lush vineyards around us) to harvesting, sorting and selecting. We also received an insight into the fermentation process which takes place in huge vats using wooden, concrete or steel structures, or a combination of two of those, and then proceeded to explore the dark, cool cellars to see the finished bottled items. Our favourite part of course was the tasting, which is hosted by experienced oenologists for both beginners and connoisseurs alike. Soon, we were picking out taste indicators of fruity, delicate and lively against fine, robust, complex and aromatic. 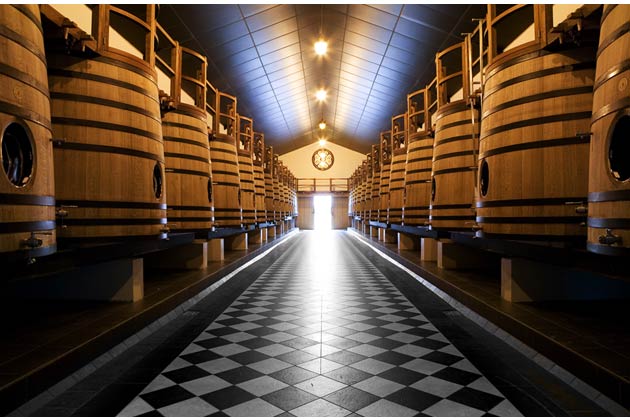 Philosophical in his approach, driven by determination and inspired by other successful people in life, Bernard Magrez has called his wines names such as ‘En Silence’ meaning ‘silently’, ‘Passion d’une Vie’ meaning ‘lifelong passion’ and ‘Jamais Renoncer’ meaning ‘never give up’.

During our stay, we were equally treated to a French cookery lesson by Chef Jérôme Bourcie, who was responsible for preparing our main meals each day with Michelin star quality, special attention and extreme French culinary flair. We sampled delicious dishes of pan-fried and creamy chanterelles with a mozzarella and smoked milk foam, royal lobster with an Iberico ham flavour and a meringue square topped with half-crystallised cherries and piped dulcey chocolate with pure Arabica snap on top. Each course was well-paired to enhance the flavours of the fine wines, all served in fine crockery, Magrez-style, with Hermes gold rimmed plates and delicate Murano glasses.

As if this wasn’t enough, we experienced a private helicopter ride to enjoy a walking tour around Bernard Magrez’s two other equally enchanting wine estates where guests can book to stay at: Château Fombrauge (a former Carthusian monastery) and my favourite, Château La Tour Carnet, which was originally built in the 1100s and is picture-perfect with its elegant drawbridge, off-white stone walls and surrounding moat – almost fairy-tale like in its overall outward appearance.

The Bernard Magrez Luxury Wine Tourism experience invites guests to get out and see its neighbouring areas and so we spent an afternoon walking through the quaint cobbled medieval town of Saint-Emilion, a UNESCO World Heritage Site rich in history with rows of wine stores, boutiques and patisseries (macarons, caneles and other sweets), and we also went for a guided talk around the monolithic church and its bell tower.   As a discerning collector and patron of the arts, Bernard Magrez, alongside his daughter, Cecile Daquin, have set up their very own Institut Culturel – a magnificent and beautifully striking must-see building with its fresh whites, soft pastels and duck-egg blue painted walls. The space is filled entirely with captivating and decorative art displays and classical and contemporary collections, pieces and paintings, ranging from Bernard Buffet, to Andy Warhol, to Anish Kapoor, all cleverly curated by incredibly talented gallery director, Ashok Adiceam. 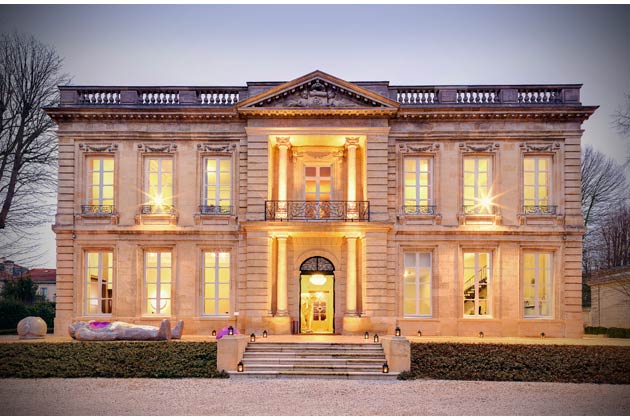 To view more of Bordeaux’s architectural heritage (and for an exhilarating ride) we took to the river of Bordeaux on board a Hacker Craft (wooden motorboat) – one of only three left in the world. Within the Luxury Wine Tourism package, guests can ask for the organisation of private concerts within the château, get involved in the harvest during mid-September to October, go fishing, have a spa day out, play golf, or visit one of the Michelin or fine dining restaurants in the Bordeaux region. Furthermore, Château Pape Clement features its very own chapel, making it a highly sought after and fully equipped wedding destination.

In the true essence of exceeding all expectations where no luxury is spared, Bernard Magrez’s private business jet Falcon 50, can personally fly you and your guests out to Bordeaux from major capital cities, with wines being served in-flight in your VIP lounge. In short, anything is possible with Bernard Magrez.