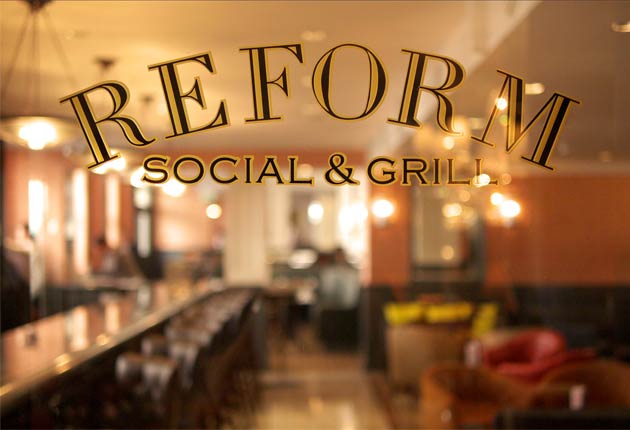 It’s a quintessentially ‘best of British’ affair at Reform Social & Grill. During our visit, there was something quite simply and utterly charming about the wine and dine experience. 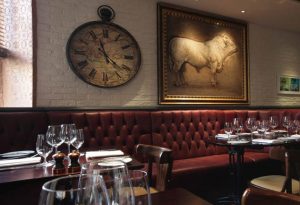 s we arrived for the fabulously British evening menu, our group of guests were already gathered to sit neatly round the Captain’s cosy candlelit Top Table towards the back of the main restaurant. It was from this unassuming yet wholly inviting wooden table that we were invited to discover Reform’s new summer food menu, along with carefully paired wines for each.

Inspired by classic British Gentleman’s clubs, Reform resides within Marylebone’s luxury Mandeville Hotel. Ingredients such as locally sourced beef, ale and black pudding all leap out from the menu to celebrate the nation’s finest feasts, yet the main attraction has by far got to be the kitchen’s Josper Oven. This Spanish piece of kitchen kit can heat itself up to 500 degrees to pack a mighty punch on the meat it cooks, giving it a barbecued flavour, while keeping all of the succulence perfectly juicy and intact. 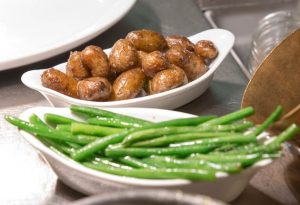 Our seven course ‘land, surf and sea’ inspired menu was prepared by Head Chef Serge Neale, who places his culinary emphasis on provenance of the British kind.

To start, we were served with a fresh and crunchy plate of thinly grilled English asparagus with a white Stilton salad and wild garlic dressing, paired with a slightly salty, mineral-rich South African Sauvignon Blanc by Groot Constantia.

Next up arrived a dish of Lyons treacle cured salmon, accompanied with a gentle kick of horseradish and potato salad, daringly matched with a very unusual (due to its characteristic hints of petrol – yes you read that right) yet highly revered savoury western Australian Riesling by Larry Cherubino.

Not normally one to be into game or offal, it was a pleasant surprise to enjoy the taste of the third course of a Scotch egg lined with a thin layer of black pudding and served with a dollop of tangy real ale ketchup to dip the delicious oval-shaped bites into. 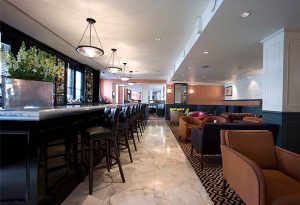 Dishes four and five were firm favourites from the foodie feast: Cornish’s gurnard (a meaty white fish) plated up with spring greens, roasted beetroot and orange, followed by a tender tasting lamb chop (cooked to perfection in the aforementioned Josper Oven) with a mint and caper sauce dressing spooned over the top. For the final ‘main’ we were treated to the ‘land and sea’ experience of butcher’s steak served rare with a beer battered prawn and garlic snails sourced from Herefordshire.

To round off our menu with something sweet, we were presented with the ‘Reform mess’ – a twist on the better known British Eton mess with meringue but instead swapping strawberries for bananas and adding in chocolate, hazelnuts and a touch of brandy. This new take on mess was all neatly sipped down with a stunningly sweet nectar-like Sicilian muscatel dessert wine by Carlo Pellegrino from the Passito di Pantelleria Halves region. There’s also a jam roly-poly with custard, red berry fool and bakewell pudding on the dessert list to take you right back to your good old British childhood days. If only we had some more space left after the seven courses…

See more of Reform Social & Grill by clicking an image below