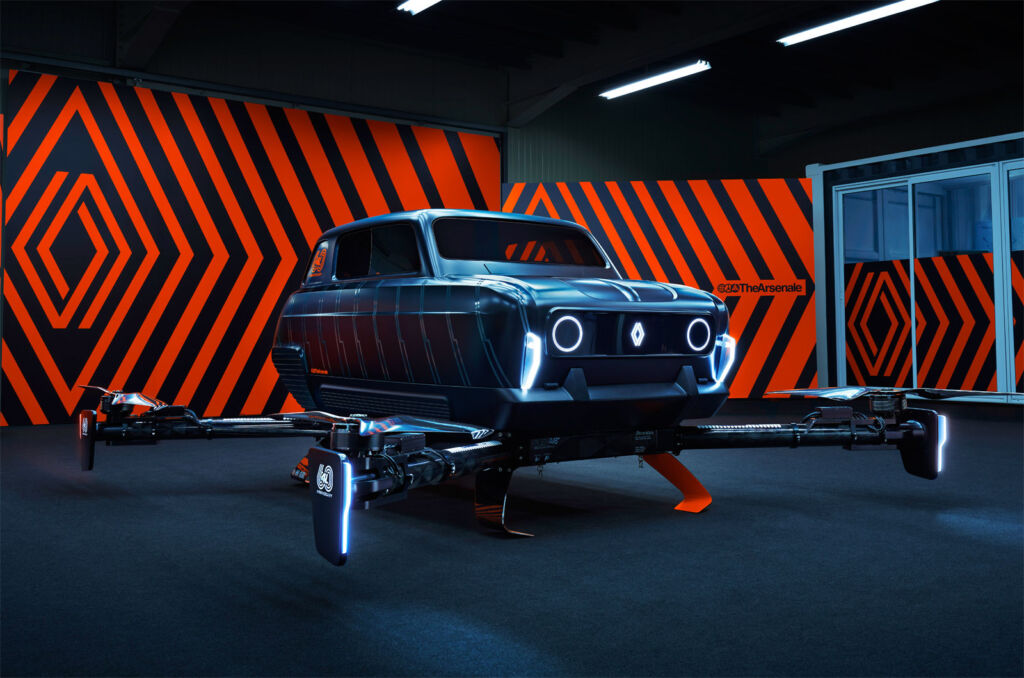 The unveiling of a concept vehicle is something that will thrill every motoring fan. As part of the 60th-anniversary celebrations for the Renault 4, the French motoring giant and TheArsenale have come together to create AIR4, a futuristic version of one of motoring greatest workhorses.

2021 is a rather special year for the Renault 4L; it just so happens to mark the 60th anniversary of the car’s launch. Although rather plain in the looks department, the Renault 4 was hugely popular in its heyday, selling more than eight million units across one hundred countries. Two of the things that made the model so popular was its versatility and attractive pricing.

The Renault 4 had an exceptionally long run compared to modern-day cars. It was such a popular model that it remained in production from 1961 through to 1992. The former head of the Renault Group, Pierre Dreyfus, called it a “blue jeans” car.

The Renault 4 was one of those rare models that offered something for everyone, whether it be transporting families, something to learn to drive in, lugging around goods for business. It was such a capable and versatile model that even the gendarmerie and the French postal service conducted their business in them. 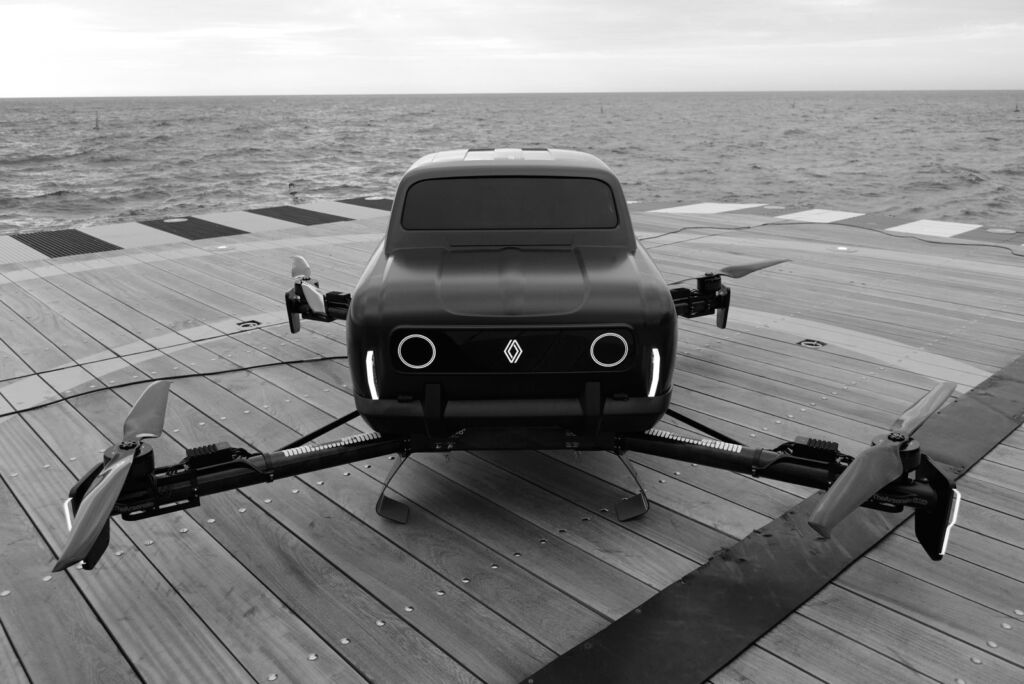 It’s this affection for the model and its ‘something for everyone attitude’ that convinced TheArsenale to collaborate with Renault to push the boundaries of what the Renault 4 is capable of and in doing so, entice a new legion of fans long into the future.

Throughout 2021 Renault has been celebrating the anniversary of the Renault 4 in numerous ways, and the AIR4 concept is the perfect way to wrap up the celebrations as we move into the holiday season. 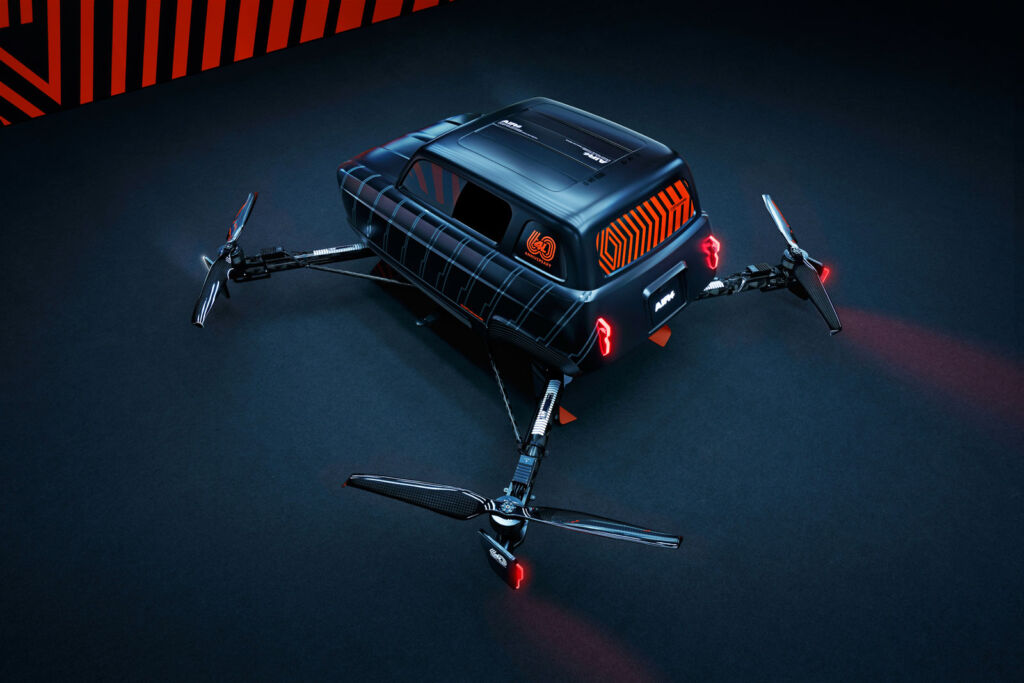 About the AIR4, AKA, the Renault 4 “Volante”
Renault and TheArsenale’s concept is designed around independence and freedom. It’s no secret that road traffic is getting worse, causing unnecessary time to be wasted. To be frank, it’s causing many of our lives to grind to a halt.

As the skies above us are unhampered, the two companies chose to take the Renault 4 into new unchartered territory, taking the motoring icon upwards rather than along.

The AIR4 concept retains the Renault 4’s original and iconic lines, and rather than being made of steel, this concept’s shell is made with carbon fibre. Any vehicle powered using life and thrust needs many hours of mathematical calculations to ensure it can remain rigid. Unlike previous decades, modern-day manufacturers and design houses have the advantage of super-computers to help them. 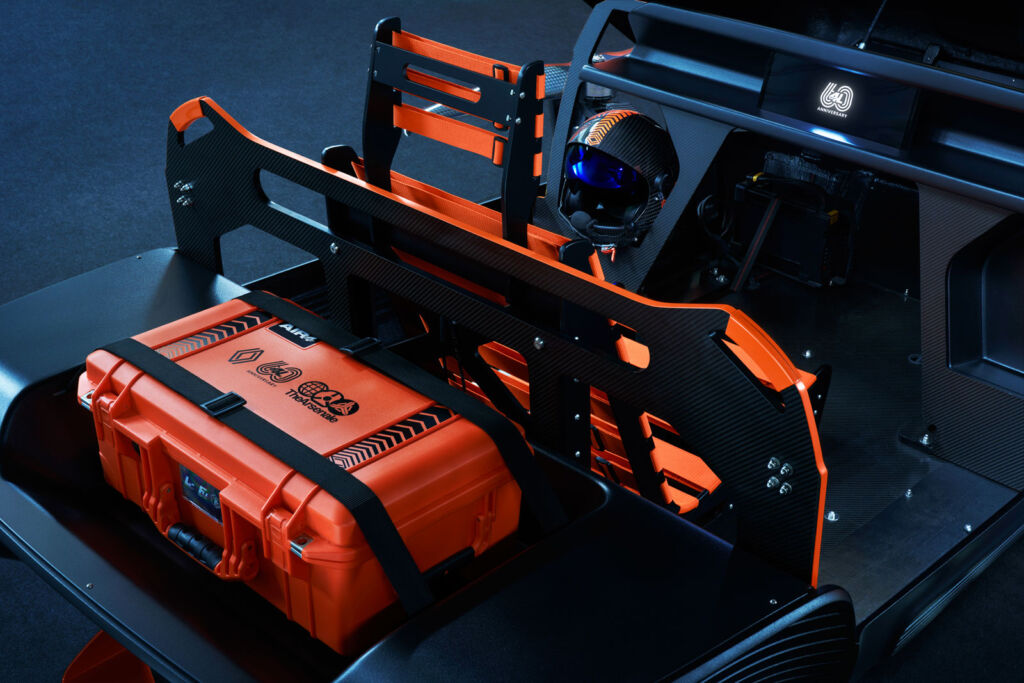 By using artificial intelligence and generative design techniques, the designers waded through terabytes of test data to fine-tune and improve the vehicle to make sure it was capable of doing what they’d envisaged before undertaking any real-world trials.

“After a year-long celebration, we wanted to create something unconventional to close up the 60th anniversary of 4L,” said Arnaud Belloni, Renault Brand Global Marketing Director. “This collaboration with TheArsenale was a natural fit. The flying show car AIR4 is something unseen yet and a wink to how this icon could look like in another 60 years.” 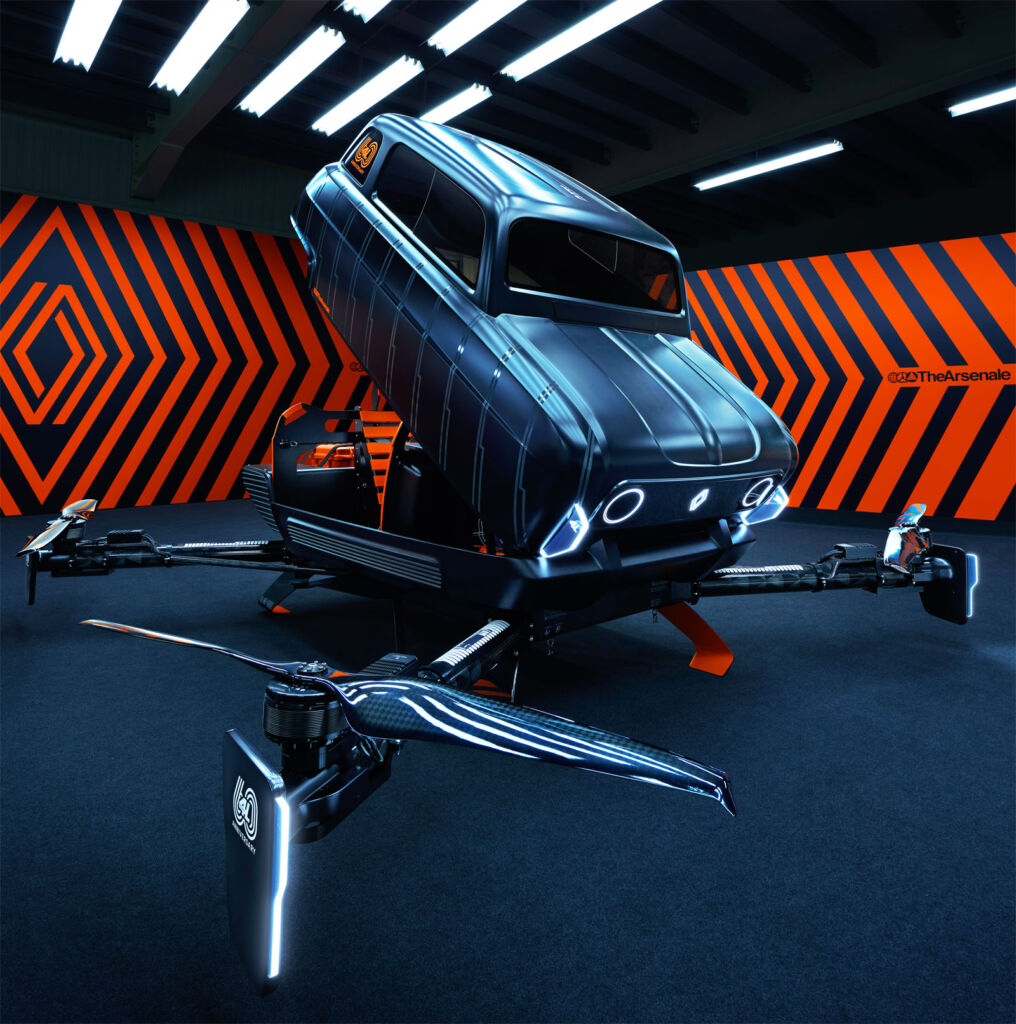 Unlike many other flying car concepts that have been bandied around over recent years, the AIR4 has no wheels. Instead, it has four dual-blade propellers located on each corner of the vehicle to propel it, with a chassis sitting in the middle of the rota frame.

The driver accesses the cabin by lifting the reimagined Renault 4 shell (shown above), which is hinged at the vehicle’s front. 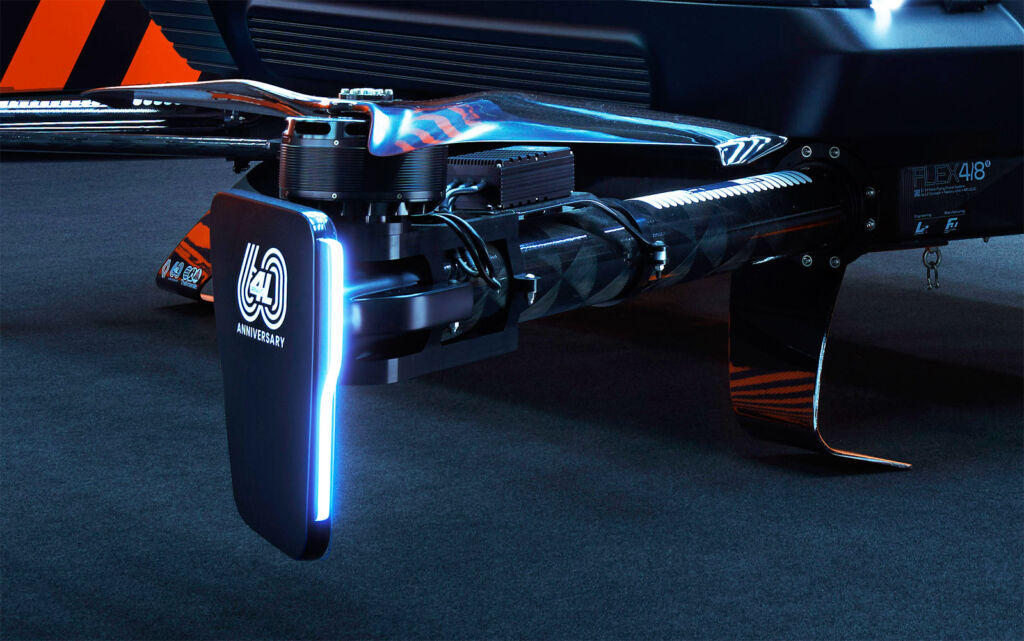 How to see the AIR4

The AIR4 will be on public display until the end of 2021 at the Atelier Renault, Champs Elysées in Paris, where it will be shown alongside other historic Renault 4 models. At the start of 2022, the AIR4 will head to Miami and then New York before making a pit stop in Macau.

The AIR4 was made in Europe’s first technology Park in Sophia Antipolis, on the Côte d’Azur, where everything from the design, engineering and assembly took place. 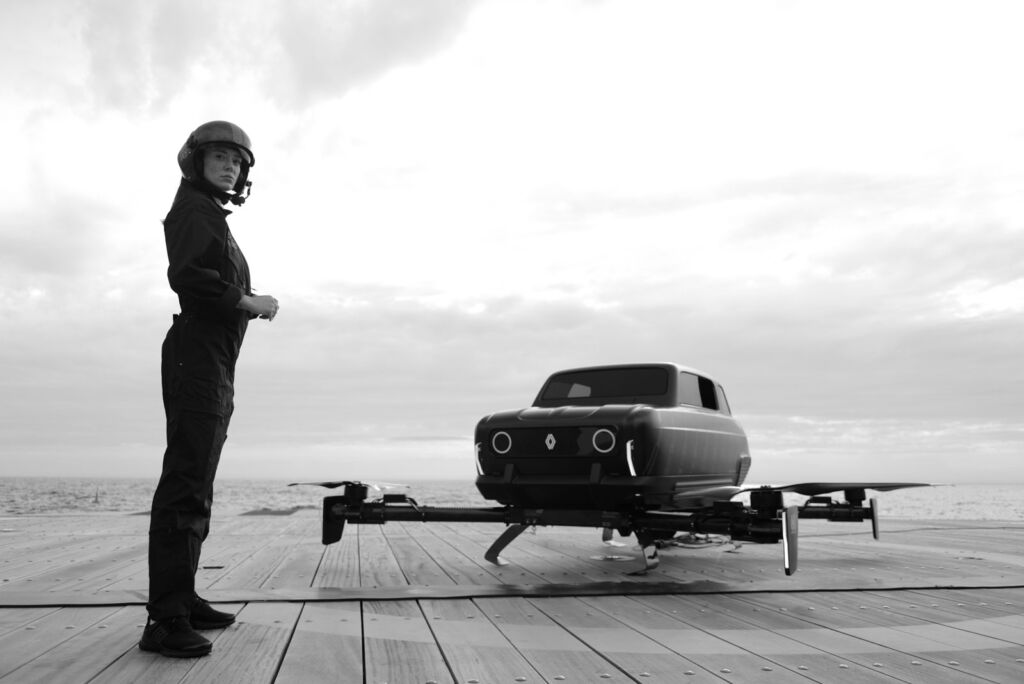 Final thoughts
If we are looking at mass-market adoption of flying cars in the future, the major drawback we can see with designs such as this is where to park it. Unless you are wealthy and have a lot of outdoor space, taking off and landing in a flying car like the AIR4 will be a tough ask as it is wider than the average vehicle, and space is something sorely lacking in the built-up urban areas.

There is, of course, green space where they can be landed; however, there’s now an added problem of still getting to where you need to from there? Is it back into a vehicle on the roads? Is it walking that will use up the valuable saved time from not being on the roads in the first place? The future for commuting is very likely to be up in the air, but, whether it becomes a reality is another matter. However, the above aside, we feel the designers of the AIR4 deserve a doff of the cap for their innovation and vision.