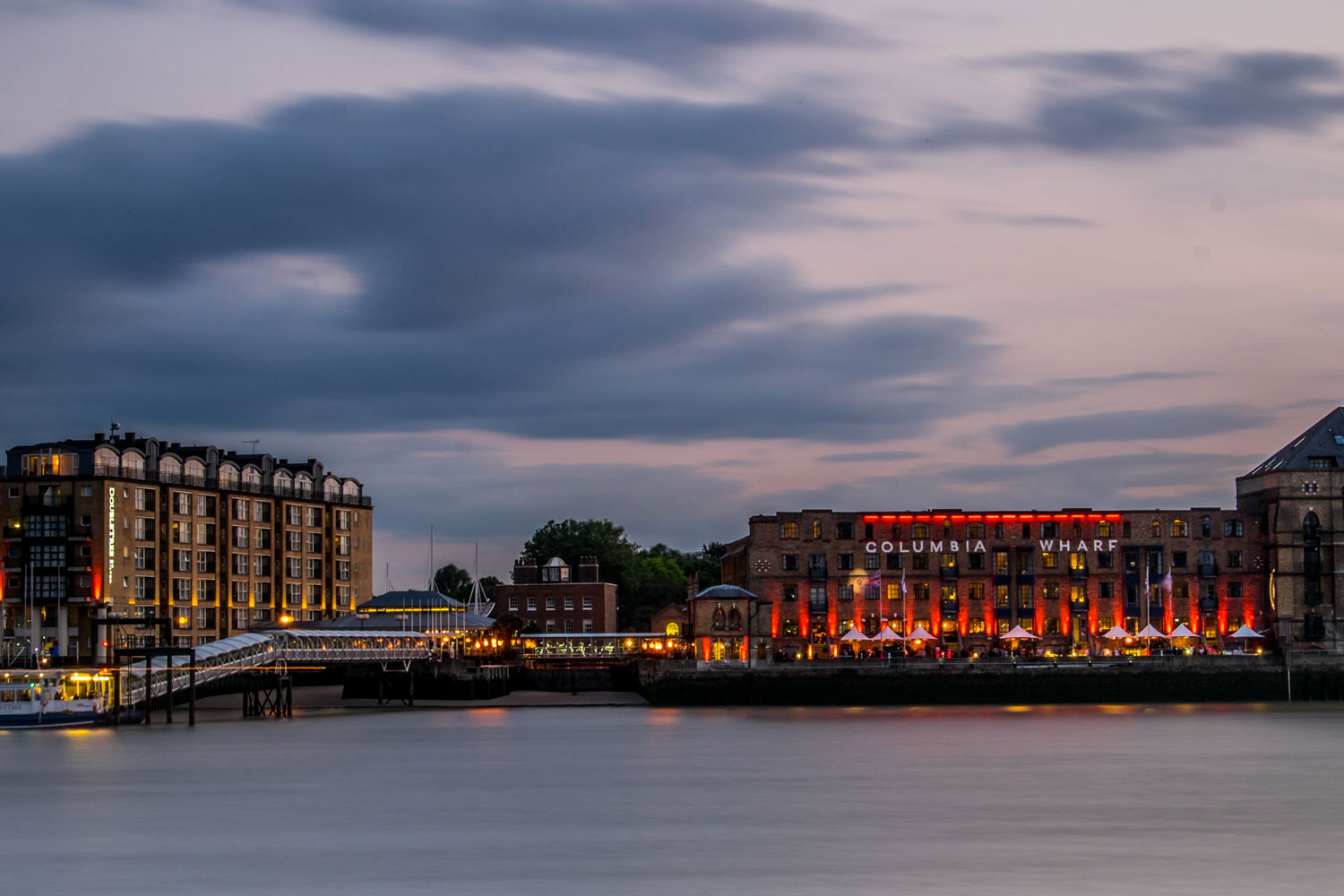 Down By The River At DoubleTree By Hilton Hotel London – Docklands

Taking a boat on the River Thames to commute to work in London is no big deal. But taking a ferry across the river when you have nowhere in particular, to go just seems that extra special – especially when that ferry happens to be a private one, to and from a luxury hotel. It’s just one of the many (complimentary) experiences offered by the new DoubleTree by Hilton Hotel London – Docklands Riverside property.

The clever use of the river continues, as the hotel has its own private dry dock which is available for hire for both private and corporate functions. It is set in a former 17th-century wharf building with attractive and exposed brickwork design elements. It has a series of walkways that allows guests to find their way between the various parts of this venue. The warm chocolate chip cookie offered to guests as they check-in can be eaten while working your way around the building – a nice touch. 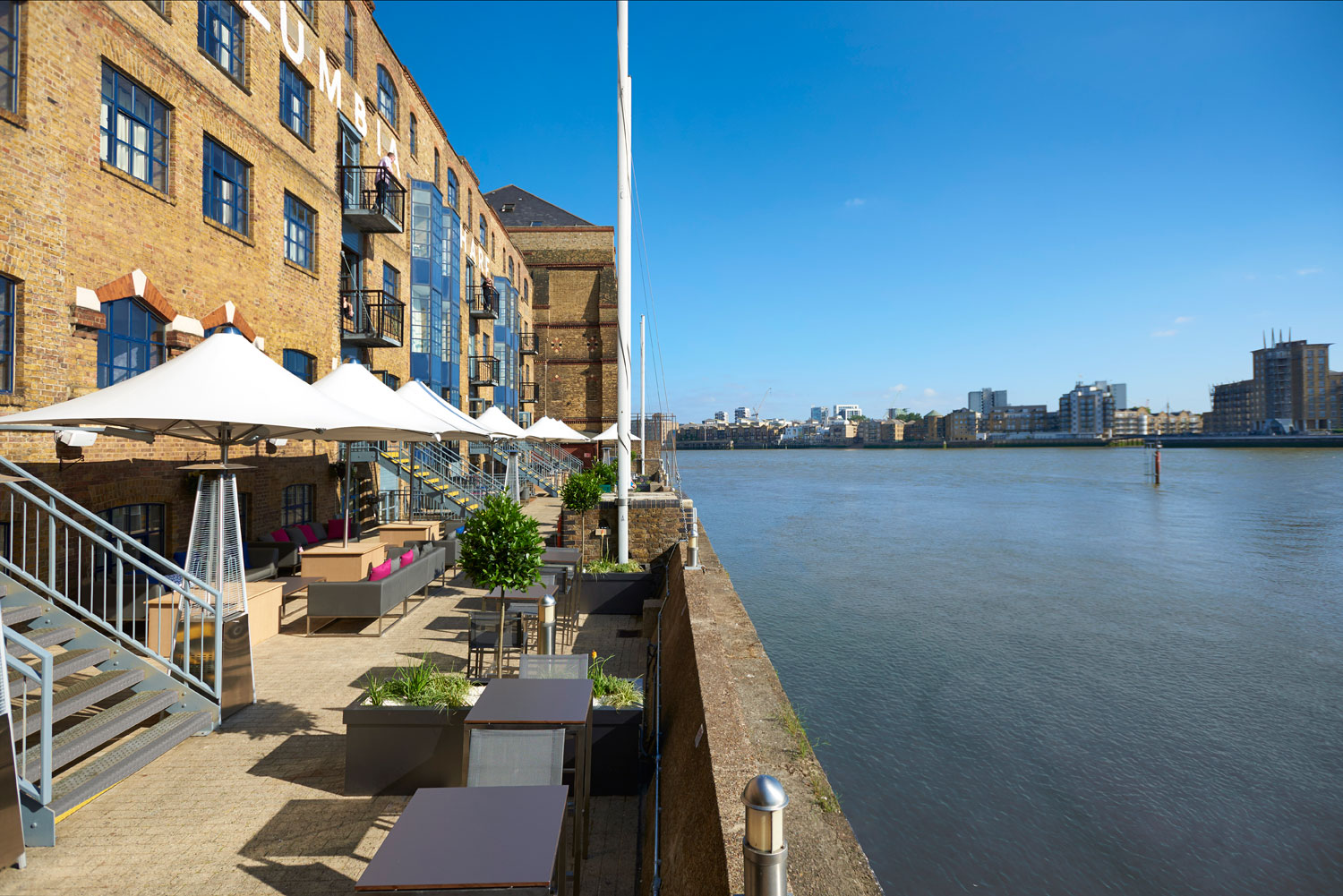 With it being a beautiful sunny evening, my guest and I decided to delay dinner in favour of making the most of the hotel’s two terraces whilst sipping on a chilled glass of Prosecco. It was a great way of taking in the Canary Wharf skyline as it descended from light to dark. I could have spent a lot longer in the bar if it wasn’t for being hungry. Although the in-house Columbia Restaurant does offer seasonal produce and barbecues on the outdoor terrace, I preferred to sit inside. 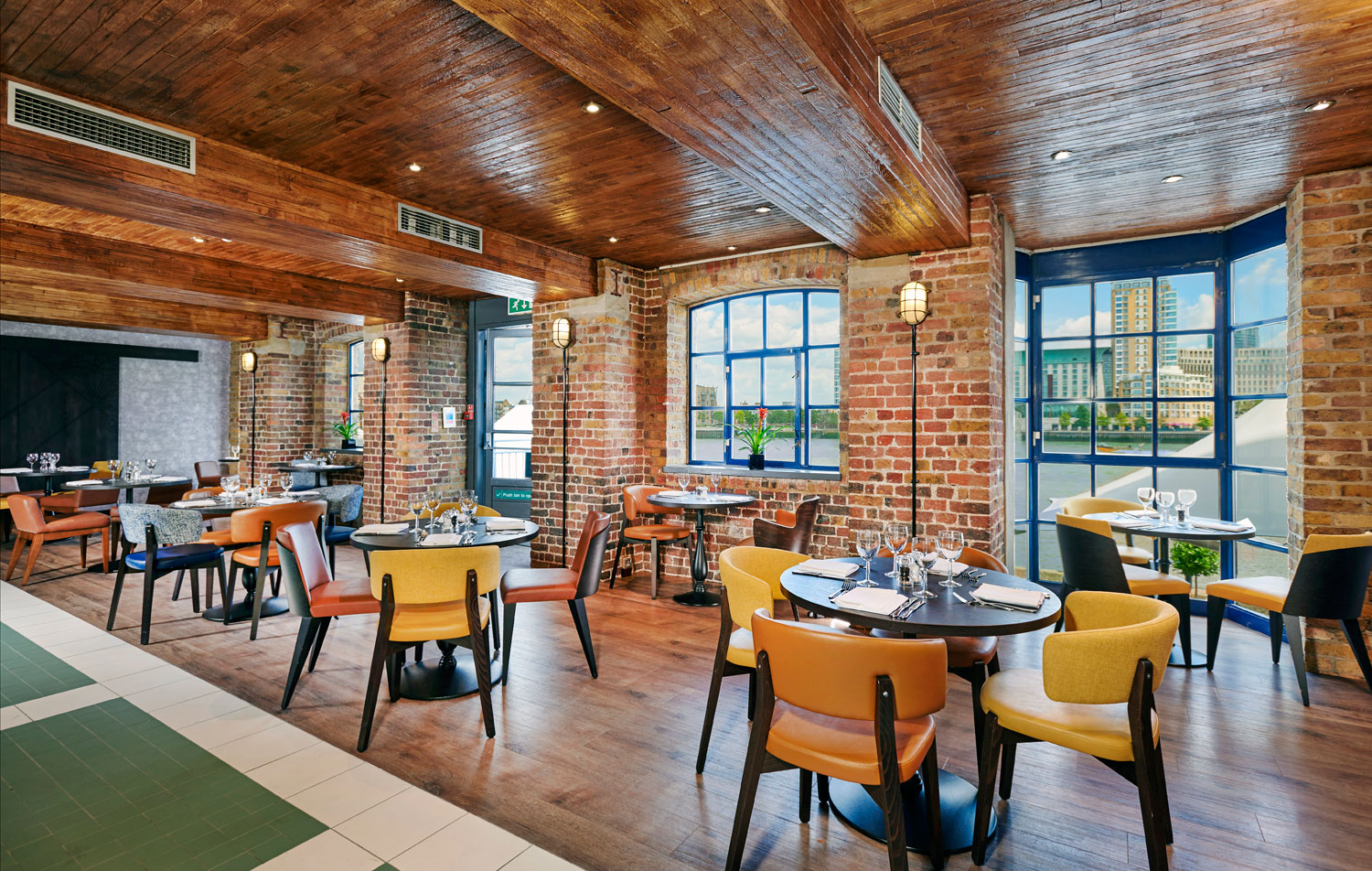 Being so close to the river, I decided to start off with seafood, and the Szechuan peppered squid took my fancy. The portion was quite big and I ended up sharing it with my guest Nicky so as not to ruin my main meal. Just as well. The spiced half chicken with garlic aioli and Columbia slaw was worth keeping room for. Again a large portion, but so deliciously succulent that I devoured the whole lot. Other grills include beef fillet, sirloin, rib-eye steak and salmon. They are all served with triple cooked chips, vine tomatoes and a choice of sauce such as béarnaise, peppercorn, mushroom, red wine, garlic butter and lemon butter. Burgers and other mains can also be picked from the rather extensive menu.

For special occasions, other eateries such as The Library and the Snug boast private dining and high-class experiences. Lighter bites can be ordered throughout the day on the terraces and the bar. 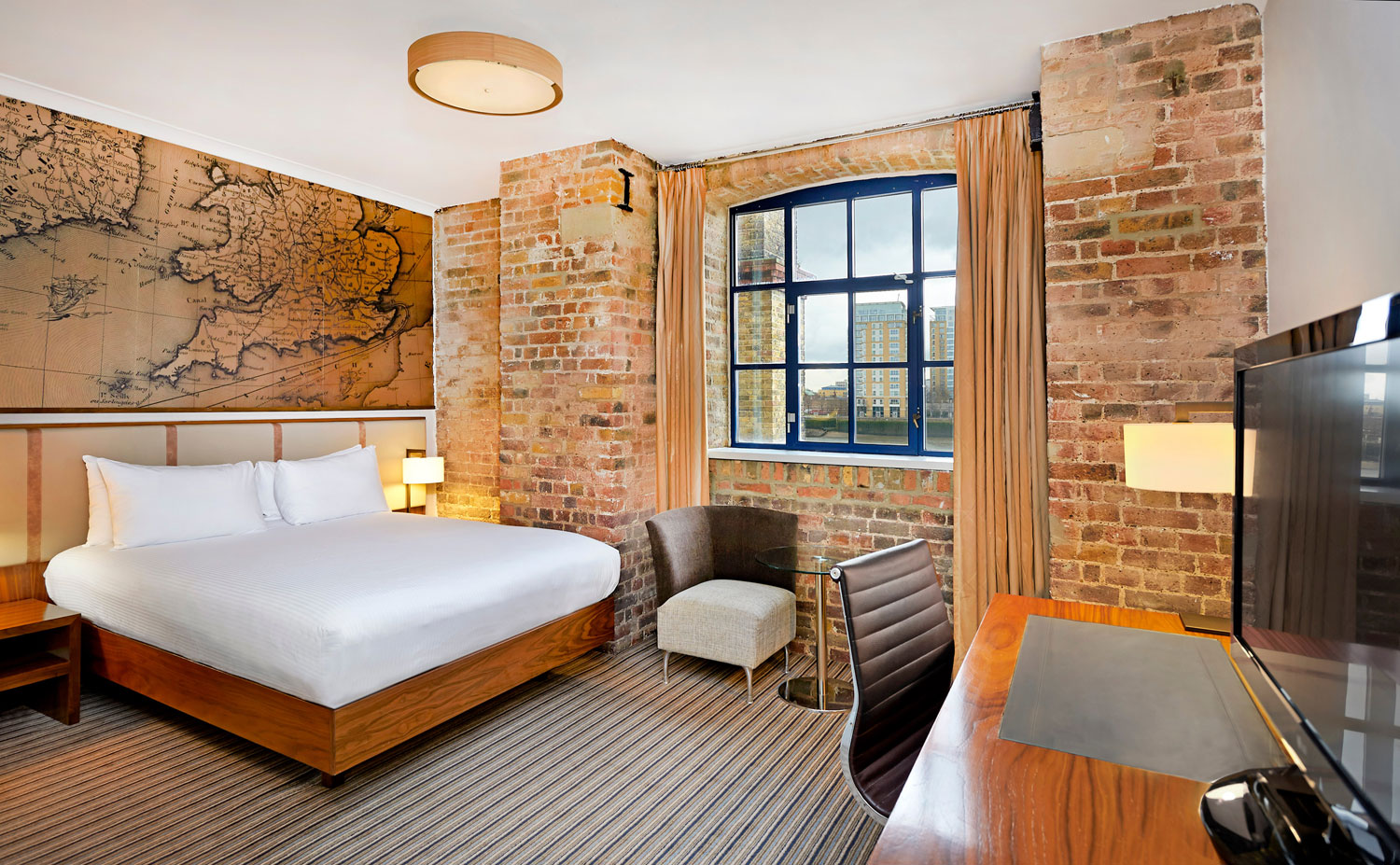 There are various sized rooms in the DoubleTree by Hilton Hotel London – Docklands Riverside hotel, spanning the guest category to suites and executives. Our room – like the others – was contemporary in design, light and airy thanks to the floor to ceiling windows with all the mod-cons expected from a hotel of this calibre. But again with that river view, I preferred to take in my surroundings than distract myself with the benefits of modern technology.

Breakfast is as indulgent as the dinner with both continental and full English options available. But the showstopper for me was the muffins infused and topped with Nutella. I promised myself that I would take a visit to the hotel’s gym if I allowed myself one. For the record, I did, but I have to admit that I took another muffin for my journey home.

I could have headed home by a bus and tube, but wanting to get back on the river again on another glorious day, I headed back to the private river ferry. As I said, there’s just something indulgent about being on a river. I couldn’t pass on that opportunity one more time.

DoubleTree by Hilton Hotel London – Docklands Riverside – Where and How?

The DoubleTree by Hilton Hotel London – Docklands Riverside is located at 265 Rotherhithe St, London SE16 5HW, United Kingdom. For more information, or to make a reservation, visit doubletree3.hilton.com, or call +44 20 7231 1001.
Rooms start from £115 per night. 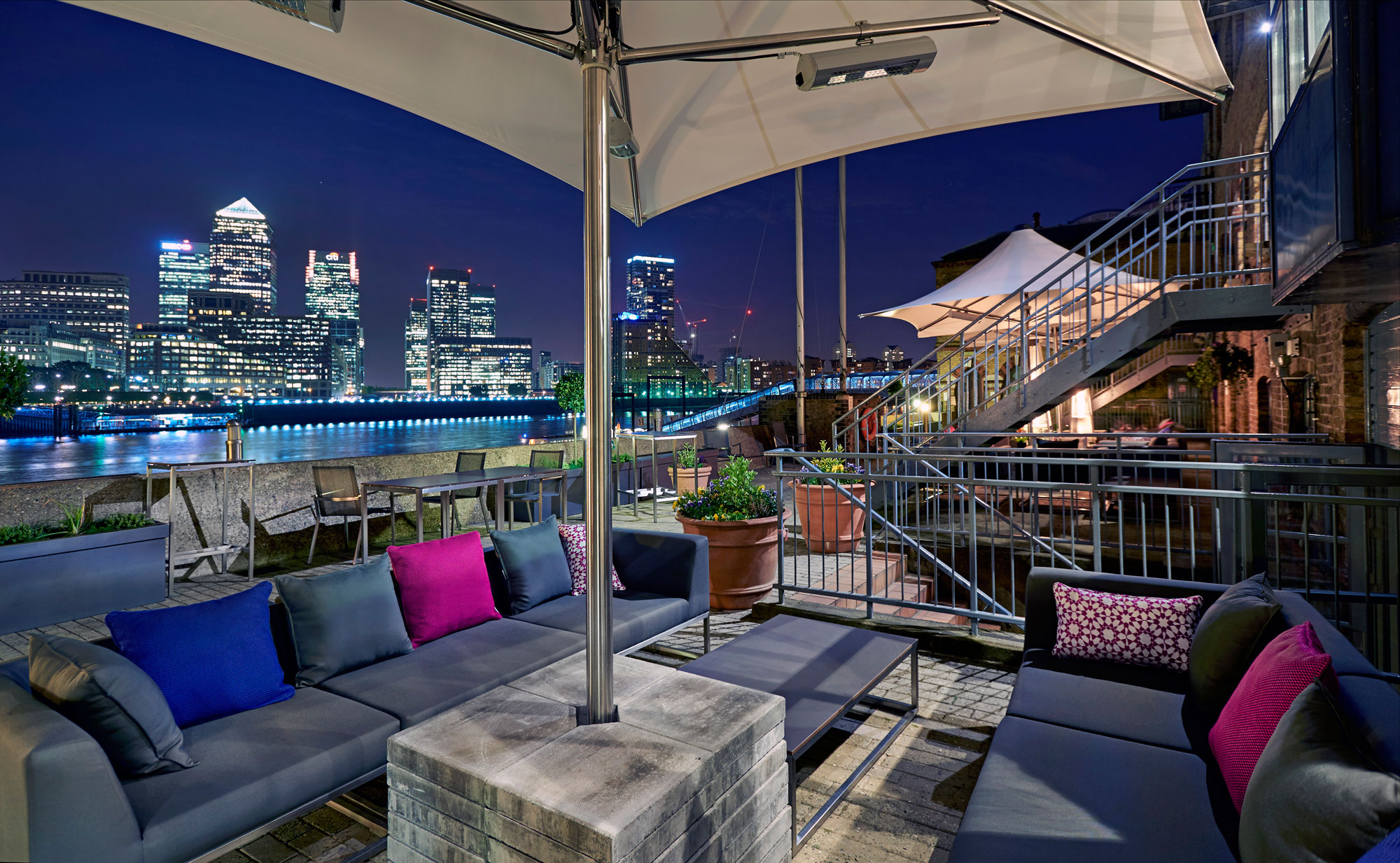