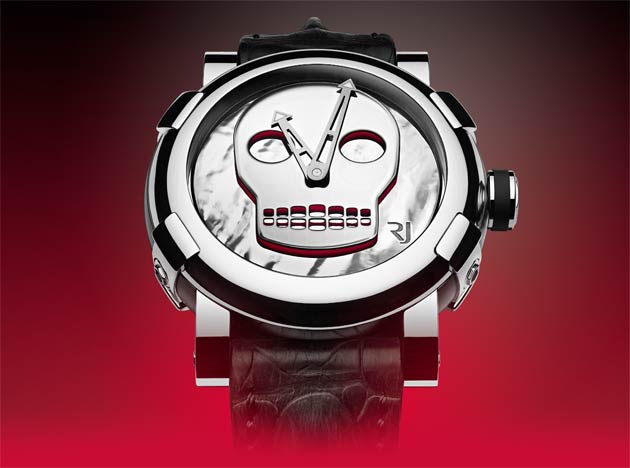 RJ-Romain Jerome welcomes contemporary art. For its first partnership of this kind, the watchmaking Maison has chosen to collaborate with an internationally renowned Swiss artist, John M Armleder.

This exceptional encounter between contemporary art and Fine Watchmaking has given rise to ten unique timepieces, all of them featuring a recurrent motif in John M Armleder’s work: the skull. Already featured in mural paintings and as a cut-out on a mirror, this skull inspired by Amerindian culture is now featured on RJ-Romain Jerome watch dials in an unprecedented collection.

Manuel Emch, CEO of RJ-Romain Jerome, is a keen collector of contemporary art. He has always admired the work of this Geneva-based artist, who refuses any form of classification of his work, preferring instead a principle of constant ″questioning″ conducive to hybrid interpretations of various genres. The two men thus naturally decided to unite their talents and ideas for the benefit of art.

″I had since long wished to combine my twin passions for contemporary art and watchmaking, and to apply the principle of a unique work of art to a limited-edition watch″, explains Manuel Emch. ″Given the brand’s origins, it was important to me to work with a Swiss artist and my own admiration for John M Armleder’s work and his status as a role model for young artists meant that my choice was quickly made!″

Conceived like veritable works of art, these Art-DNA pieces are made of polished steel. The skull motif applique is raised and serves to decorate the hammered, polished dial. The underside of the applique is lacquered with a colour revealed by a subtle play of shimmering reflections on the dial. Each unique piece is a different colour. The back of the watch is numbered and bears an engraved medallion with the artist’s signature.

For John M Armleder, ″the skull evokes a memento mori and an allegory of the passing of time, which is an appropriate subject for a timepiece and which interests both art and watch collectors″. The artist adds: ″All these watches that give the impression of looking alike are ideally suited to death, which is basically the same for everyone, but which takes place differently each time.″

About John M Armleder
John M Armleder is a Swiss visual artist born in Geneva in 1948. His internationally renowned work is above all an attempt to transform the status of works of art in terms of how they are perceived and received. The complex relations that a work can create with different environments and the interactions to which it gives rise are key to the artist’s approach.

In 1969, together with two other artists involved in the Fluxus movement, Patrick Lucchini and Claude Rychner, John M Armleder founded the Ecart group. Their ambition was to master all the phases involved in artistic production, from creation to presentation and dissemination of the works. They went on to found an art gallery in 1973 that was also named Ecart. The performances he staged at the time were marked by the influence of Fluxus as well as by a detached and amusing neo-dada spirit. They influenced his approach which played on the integration and disturbance of places. Collage later led him to evolve towards the more geometric abstraction that marked his initial paintings, which were ″freely formalistic″. Associated with the neo-geo trend, from 1979 onwards he developed his own vocabulary combining abstraction with the re-use of furniture, creating pieces midway between painting and sculpture which he called Furniture sculptures.

John M Armleder has represented Switzerland at important international events and exhibitions such as the Paris Biennale in 1975, the Sydney Biennale in 1986 and Open Ends at Moma, in New York in 2000. He has taught at ECAL (Ecole cantonale d’art de Lausanne – Lausanne School of Art) since 1994, and at the Braunschweig Art Academy in Germany. His many apparently disordered works feature a number of different approaches. Irony, detachment and apparent indifference are some keys to understanding this work, along with an enormous sense of jubilation. John M Armleder lives and works in Geneva.

About Manuel Emch
Born in Switzerland in 1972, Manuel Emch studied design at the Art Center in La Tour-de-Peilz before gaining a Master’s Degree in business at Lausanne University’s Faculty of Business and Economics (HEC). The winner of several watch design awards, Manuel Emch is gifted with considerable skills in the field of establishing and consolidating brand identity, which he ably demonstrated at Jaquet Droz, which he revived and repositioned as one of the finest references in the field of Haute Horlogerie.

On January 1st 2010, Manuel Emch joined RJ-Romain Jerome as CEO in order to give it a fresh creative impulse and to establish the credibility and reputation of this youthful brand that shakes up the conventions and clichés often associated with watchmaking. In parallel with his activities in the watch industry, Manuel Emch has for over 20 years nurtured a passion for contemporary art and has built up an eclectic collection.