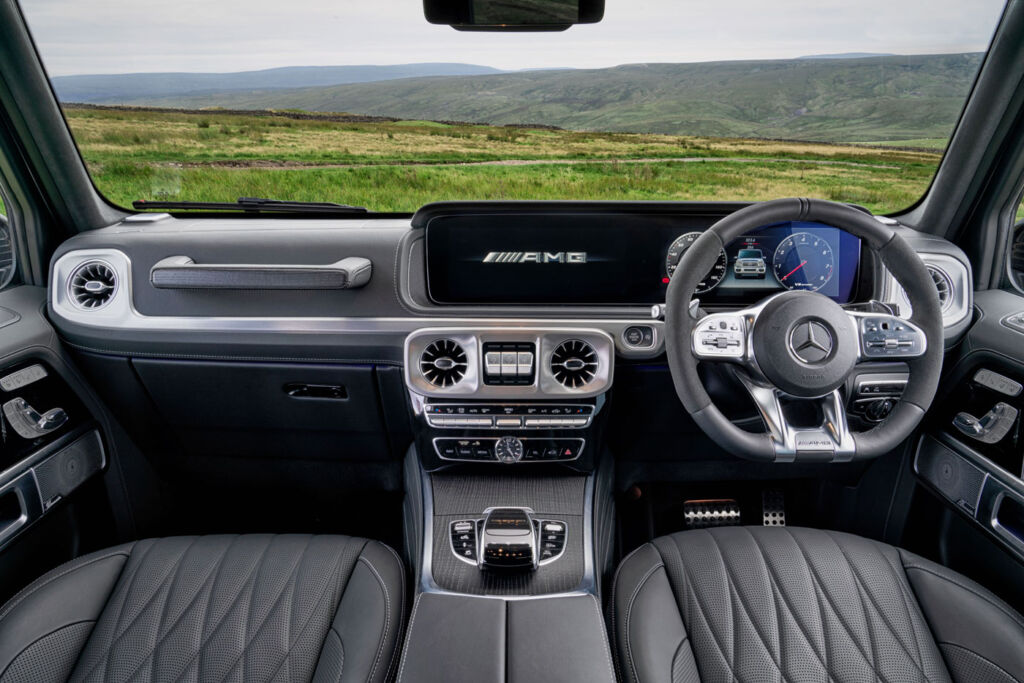 The interior of the G 63 has been beautifully designed, and the addition of hints of brown leather, and open-pore walnut wood trim on the centre console and underside of the display panel, give it an aura of sophistication. Furthermore, the refresh in 2018 brought extra leg, elbow and shoulder room, and the cabin is also spacious front and rear, with deep foot wells.

There’s been no expense spared when it comes to ensuring the comfort of the driver and their passengers in the latest iteration of the G 63. The seats, which are all heated, are ordinarily dressed in AMG Nappa leather, but our particular example was finished with the soft-to-touch and exclusive AMG beige Nappa leather (£5,500 for the privilege) which sported a diamond-quilted pattern. They also come with automatically inflating lumbar supports which hug you as you corner, a strange sensation to begin with as it’s like someone digging you in the ribs, but it quickly becomes part of the driving experience after you have put in a few miles. The front passenger equally has a large leather-clad grab handle above the glove box to hold on to when doing some serious off-roading on rough ground. 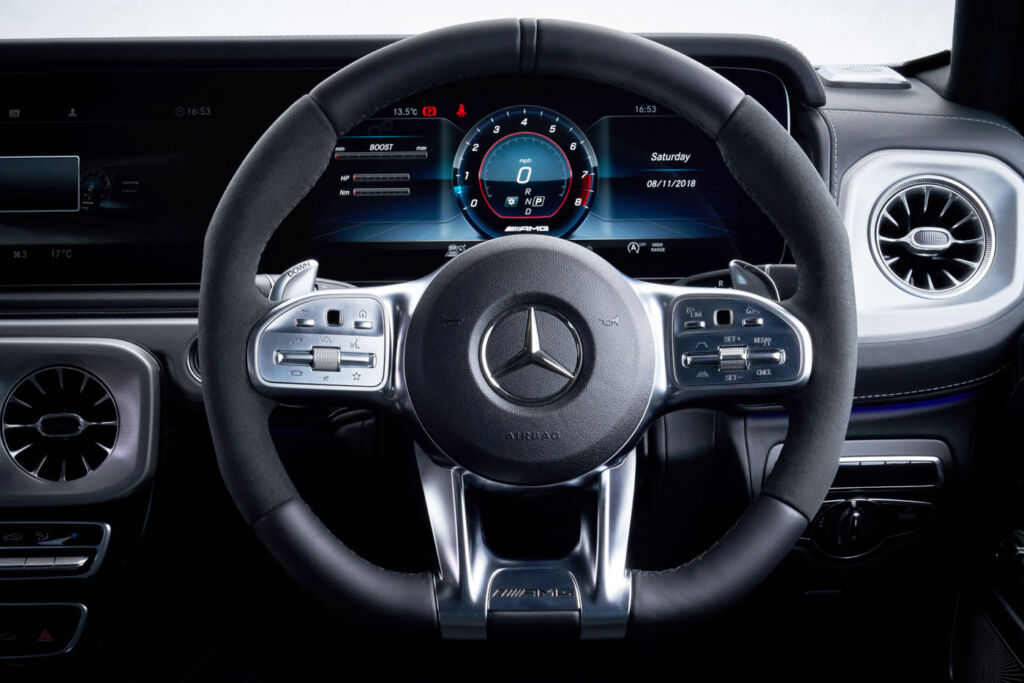 The G 63 comes with plenty of techno-wizardry to keep the eyes and ears entertained, starting with the two 12.3-inch displays which sit behind the wheel on one elongated tablet-style dashboard – one is for the speedo and rev counter, whilst the other is reserved for the likes of entertainment and the on-board satellite navigation system. For those who also like a touch of audio accompaniment, this model is fitted with a sublime and crystal clear 15-speaker Burmester surround sound system as standard. When it comes to illuminating the cabin, there’s 64-colour ambient lighting, which we sampled during our drive of the E220d last year, plus you can you add some rays of sunshine courtesy of the retractable sunroof.

On to the exterior, and the words “road presence” do not do the G 63 enough justice, as its robust and angular persona dominates the tarmac wherever it goes. There are of course the circular headlamps (now LED) which have long been a feature of this model, and sit either side of the signature Mercedes star and grille lying at the end of the sweeping squared-off bonnet. Looking at the sides of the car, and this is where you find the tinted windows and two pairs of aggressive twin AMG sports exhausts mounted underneath the running boards which are put to good use when getting in and out of the car. The G 63 is a five-door model, and the doors are noticeably heavy to operate, with the rear one particularly so, as it’s furnished with a stainless steel-covered spare wheel. However, what’s nice to note, is that the old-school clunk, when they are opened and closed, has not disappeared as the G has evolved through the generations. 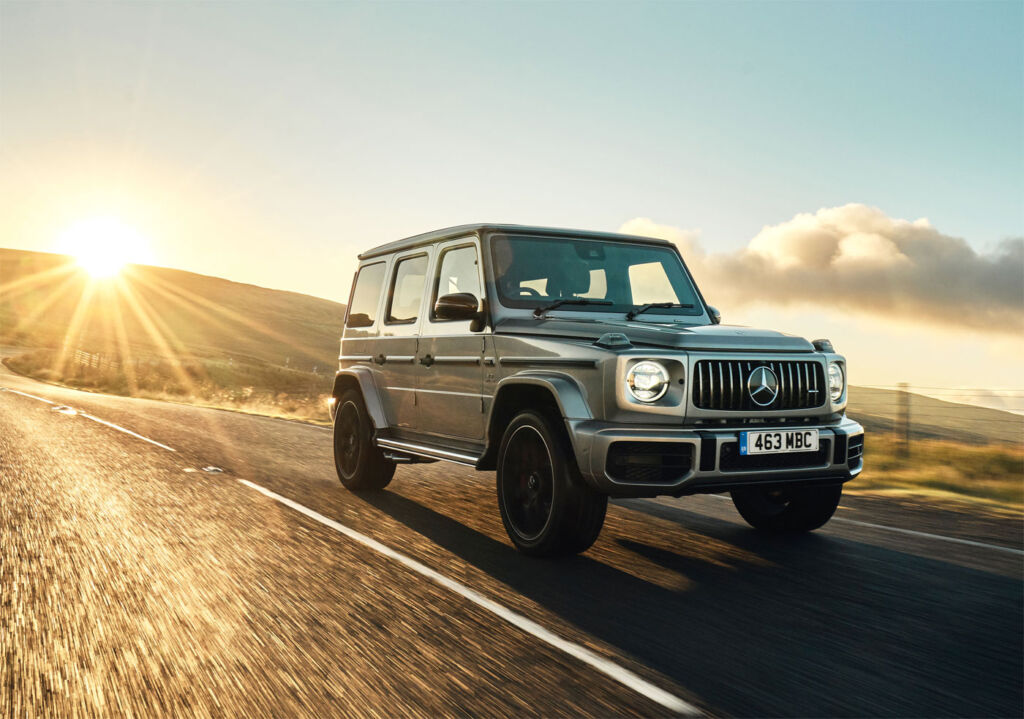 So what’s it like to drive?
Unleash the power in a straight line, and it’s mind-blowingly quick. The delivery of performance appears effortless, and the V8 has the potential to catapult you to a staggering top speed of 149 mph (when the £2,000 AMG Driver’s Package has been chosen), twice the national speed limit (137 mph is the normal maximum without this option).

For some more thought-provoking statistics, there’s 850 Nm of torque to hand, and 62 mph from a standing start is achieved in just 4.5 seconds, or what seems like a blink of an eye, a very impressive feat considering the G 63 tips the scales at around 2.6 tonnes. When your foot hits the accelerator, there’s a gorgeous burble from the sports exhausts which emanates from right underneath your seat, and is therefore much more audible than if they had been mounted on the back. The engine is also clever in that, if you are sitting at around 1,500 revs, and driving in areas such as residential streets where speeds are slower, the engine will shut down four of the cylinders so that it is more efficient. A small blue cylinder head symbol will illuminate on the dashboard to let you know when this happening as you won’t feel any evident drop in power. 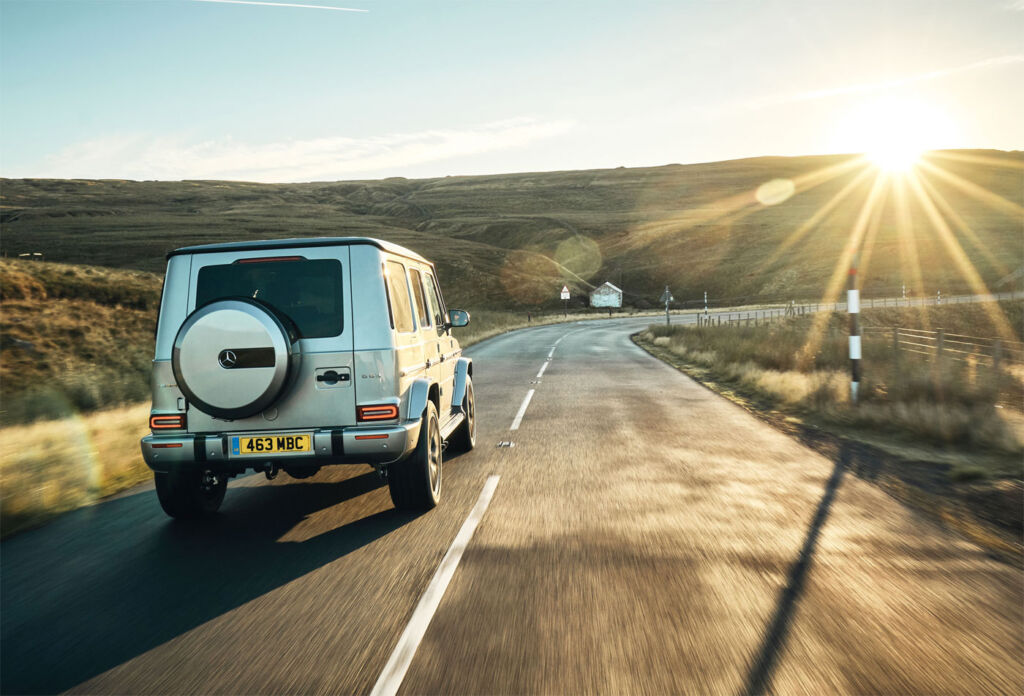 With nearly 600 horses on tap, you definitely need a fast-shifting gearbox to match, and that’s exactly what AMG’s nine-speed automatic transmission delivers. The movement between ratios is seamless, and there are paddles behind the heated sports steering wheel if you want to have a go yourself.