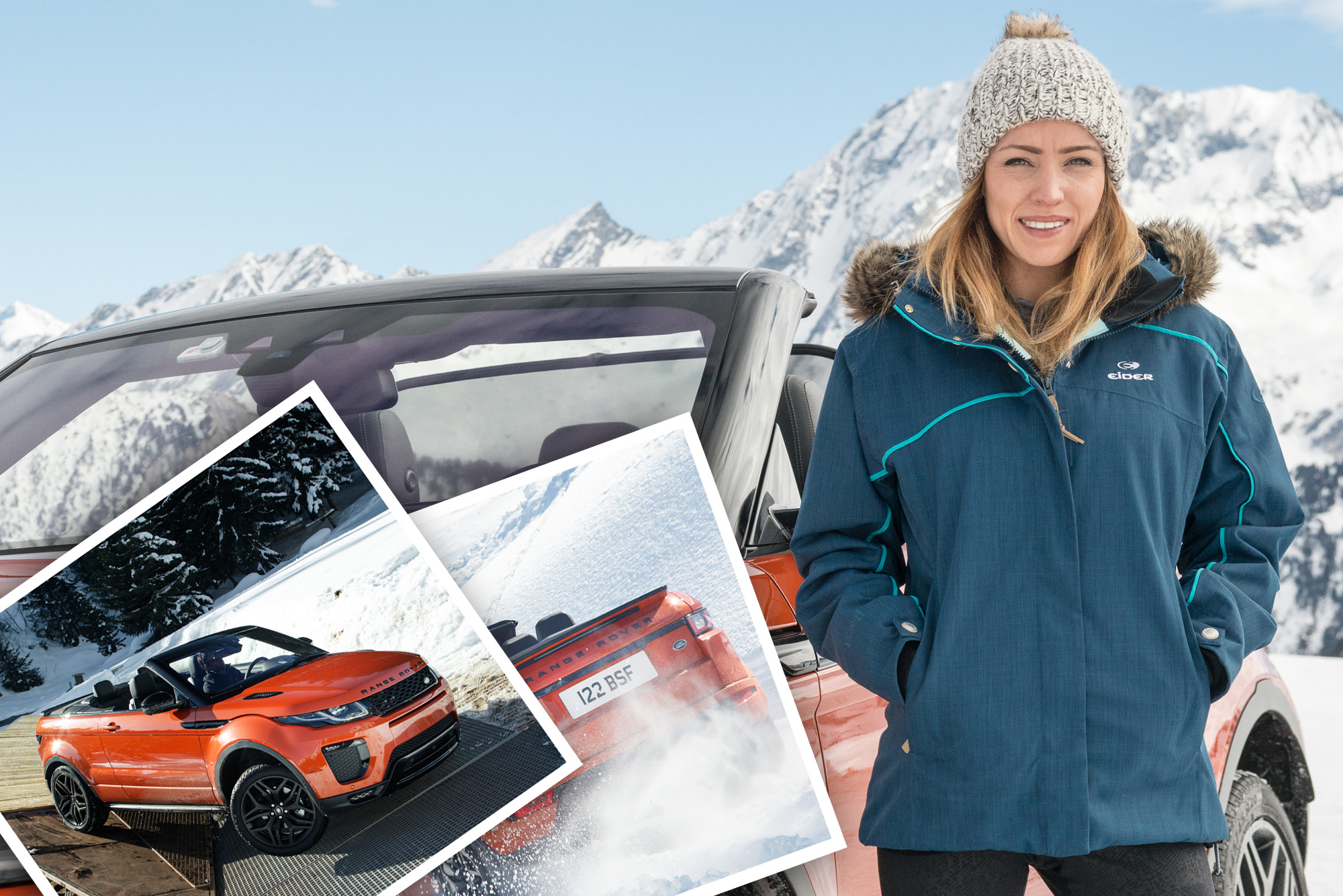 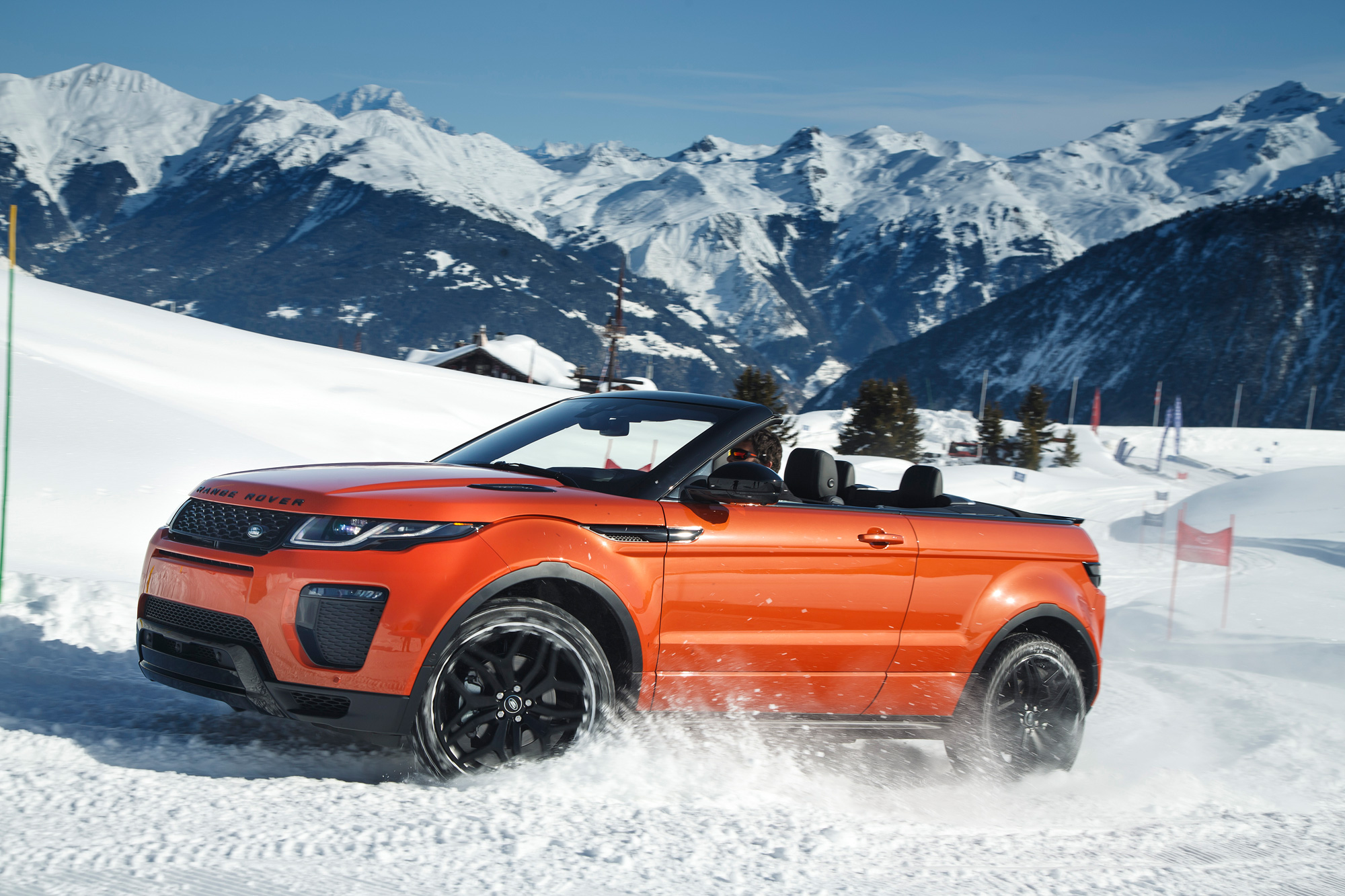 Late last year Land Rover announced they were slicing the roof off their fastest-selling model, the Range Rover Evoque, to mold it into a beautiful new creature: the world’s first luxury SUV convertible.

The cynics among the car community spoke first, claiming such an engineering feat was laughable, and that Land Rover couldn’t possibly retain the Evoque’s off-roading prowess with part of its chassis missing. How wrong they were. (You’ll see why later.) 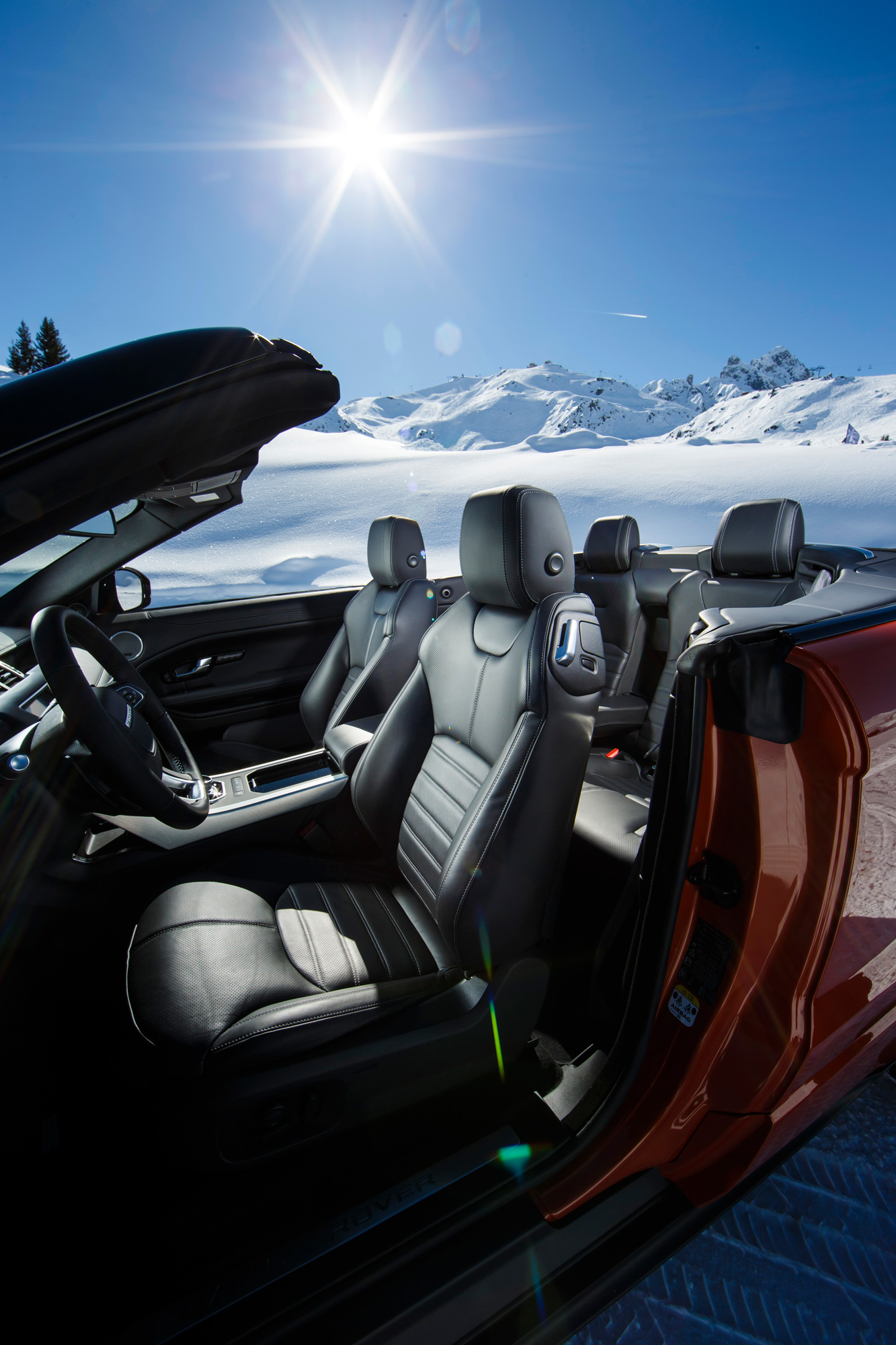 To launch the Evoque Convertible, Land Rover invited us to Courchevel in the French Alps, to test the car they dub ‘the 4×4 for all seasons’. And where better to prove its worth to us and the world’s media, than the most affluent ski resort in the world? An area synonymous with luxury and adventure, just like the Evoque.

So I found the finest ski jacket and salopettes money could buy and set off for a weekend of 5* luxury, to see if the new roofless Range Rover is just as at home on the twisty, treacherous roads of the Alps, as it is on Chelsea’s Kings Road.

365 days of drop-top driving
As I arrived in a region that barely reaches 10 °C in the spring, driving with the Evoque’s roof down didn’t seem too, shall we say, appealing? But to my relief, as we approached at our cars for a long drive into the Alps, the radiating heat inside the cabin left me desperately fumbling for the zip on my jacket.

The Evoque’s cabin retains the warmth of the heaters and heated seats really well, perhaps in part down to the high, chunky sides of the car. Plus, when you’re driving at speed, you needn’t worry about the wind ruining your fun as the wind deflector (that classic convertible piece of kit) and angle of the windscreen proved that open-top driving in sub-zero temperatures needn’t be bone chilling. A convertible for all four seasons indeed.

An SUV with serious sex appeal
With the original Evoque already so easy on the eyes, it’s hard not to get excited by this stylish off-roader that can now double up as a convertible. It’s a vehicle to be seen in for sure.

In true engineering excellence, Land Rover has retained the Evoque’s sleek silhouette – resulting in a head-turner of a car. That probably – definitely – explains why so many people stopped me in Courchevel to ask where they could buy one.

The elegant fabric roof looks neat when tucked away in a z-fold format, and the frameless doors ensure the car looks clean and uncluttered while you’re cruising along with the roof down. Which, by the way, lowers in 18 seconds and rises in 21 – even if you’re travelling at 30 mph. 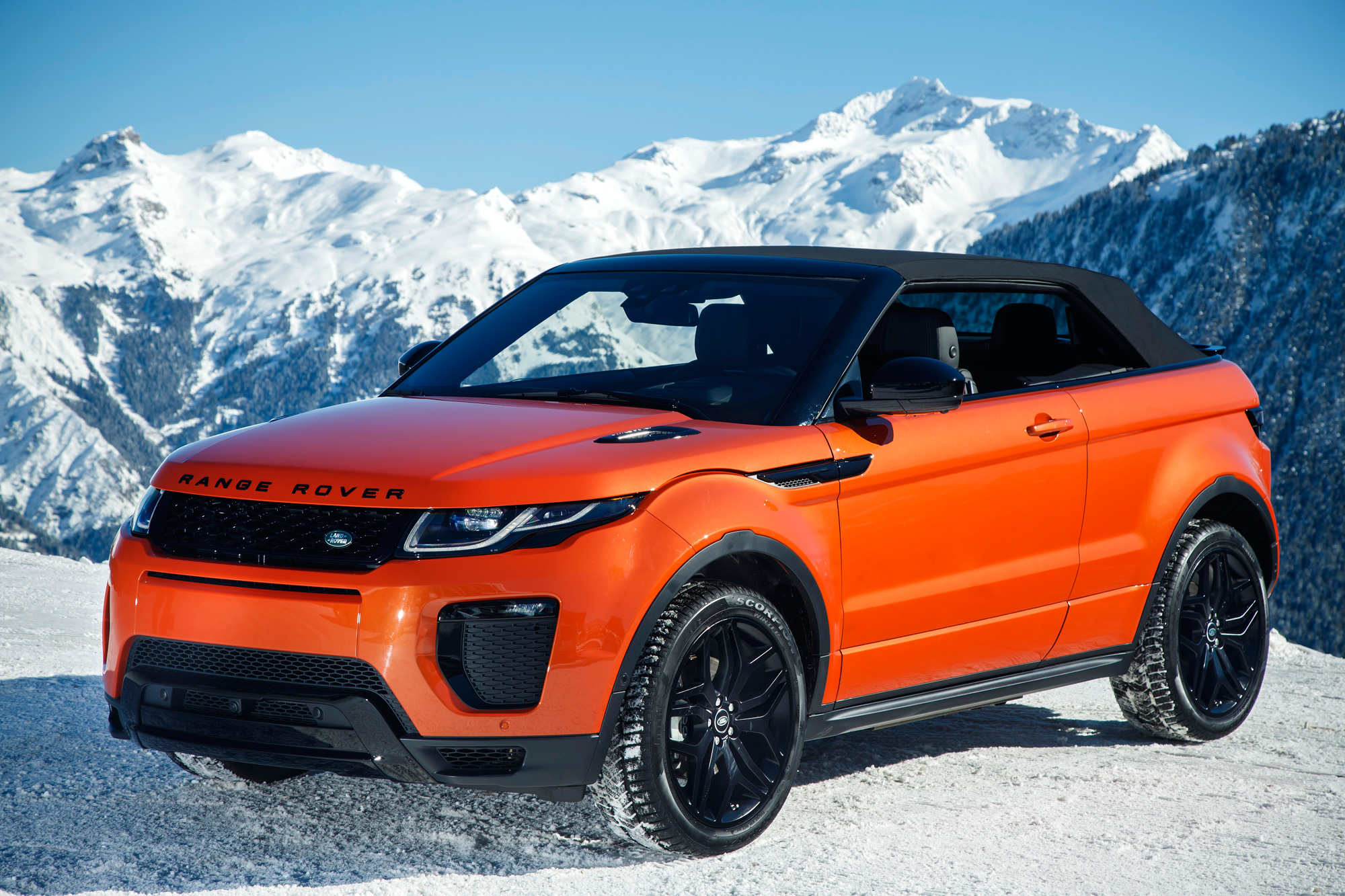 There’s no end of little luxuries inside the Evoque Convertible: the hand-stitching on the dash, the glossy black grill and bonnet vents, the ambient lighting and puddle lamps. I could go on… The memory foam Oxford leather seats with padded arm rests are comfier than the armchairs I’ve got in my living room. And, in case you’re not quite comfy enough, you can flick on the back massagers to ooze away the tension during longer drives.

Taking all terrains in its stride
There’s no denying the thrill of roof-down driving, especially against the dramatic setting of the Alps. And driving the Evoque Convertible was just as satisfying, both through the twists and turns of the narrow mountain lanes and cruising at speed on the motorway. Nine gears in an automatic gearbox and numerous driver assist functions (more on this later) make for an incredibly smooth drive. But the Evoque can be cheeky too, when you want it to. Set in Sport mode, there’s more than enough power and responsiveness to see you through any kind of situation.

But it was on Land Rover’s off-piste snow drive (which they literally carved out of snow) that we saw the Evoque’s capabilities come to life. Able to scale 45-degree gradients, tilt to 35 degrees, and wade through water that’s up to 500 mm deep, anything’s possible with Terrain Response at the helm. It delivered power and traction to each wheel that needed it most, making light work of the deep snow in the car’s path.

Set in Grass, Gravel and Snow, along with the new ATPC (All-Terrain Progress Control) system, the Evoque magically (I say this, it felt magical) did everything for me apart from steer. You can set the top speed at 20 mph and in icy conditions, this little function is a life saver – especially for nervous snow drivers like me. 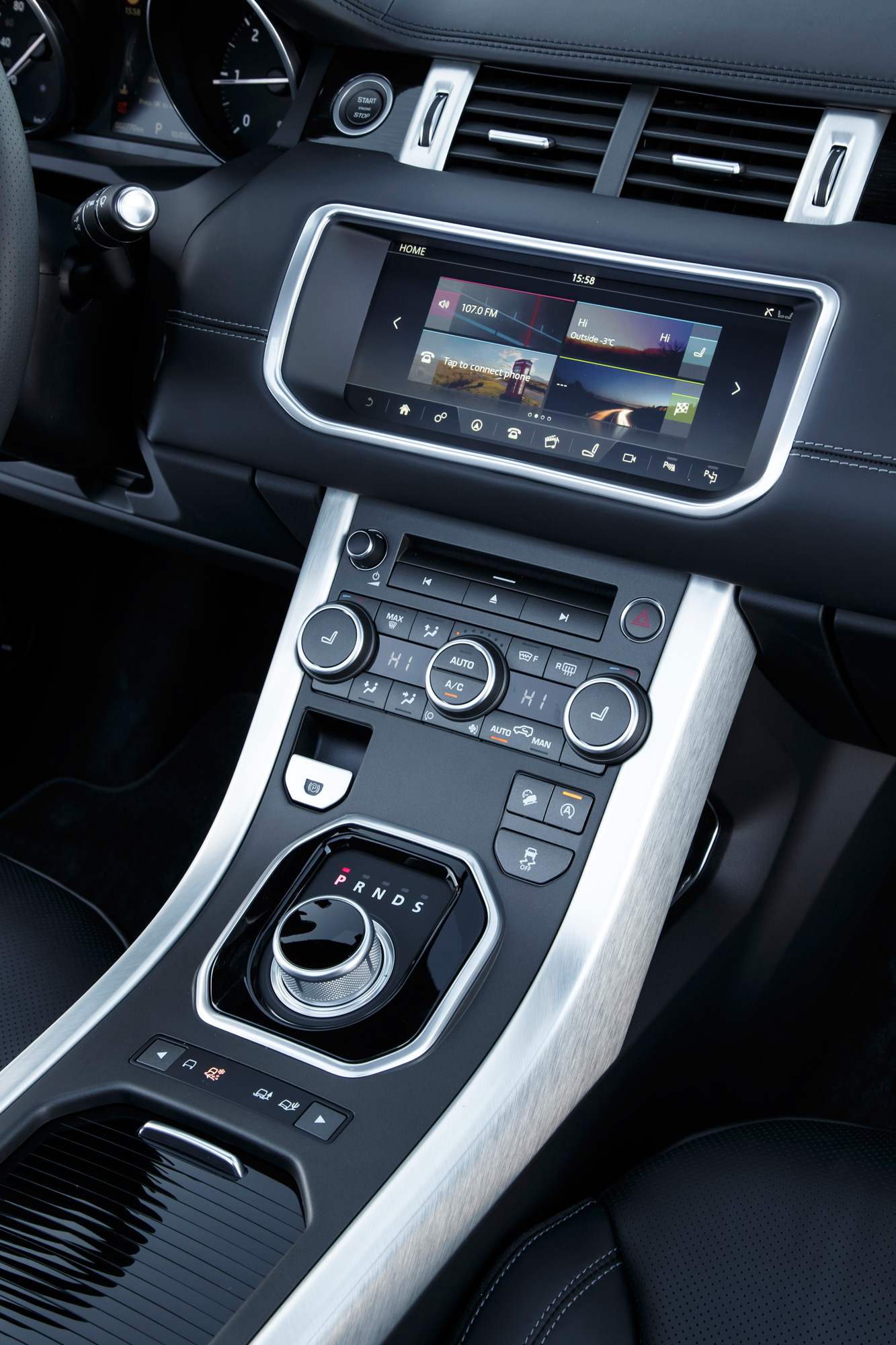 Top-end tech inside
In keeping with it’s luxury charisma, the Evoque Convertible has been fitted with the new InControl Touch Pro screen which comes with its own 3G. You can pinch, zoom and tap on the large(r) 10.2-inch touchscreen, to control your music, the car’s climate (and those back massagers), functions on your phone and sat nav. It’s as close to a tablet or smartphone that I’ve seen in a car, and is really responsive too. Connect your smartphone to the car to open up a whole bunch of features, e.g. you’ll get an alarm on your mobile if the vehicle is stolen or the car’s alarm is sounding.

The screen also displays the crisp 360-degree parking cameras, which I’m sure will come in handy for tricky supermarket parking situations.

Storage space and comfort
Boot space is something the Range Rover Evoque Convertible can still boast about, with a 251-litres of space in the back and plenty of nooks and crannies to store your stuff. We had no issues fitting a weekend’s worth of luggage for two people in the boot of the car.
There’s lots of room in the front too, making it comfortable for the driver and passenger when driving over distance.

State-of-the-art driving assistance
The luxury Evoque Convertible has been packed with plenty of features to make driving it even more enjoyable. One of which is Lane-Keeping Assist, which proved it’s worth in Courchevel when I was faced with driving new car on the opposite side of the road. When activated, should you find yourself drifting into the next lane (as I did), the lane-keeping assist will kick in to action and gently steer you into the correct lane.

Another safety feature (the car is filled with them) is the Driver Condition Monitor which analyses your steering and spots any jerky movements, alerting you to take a break. With all these systems activated and working together, it’s hard not to feel safe inside the Evoque.

Leanne Kelsall was wearing Eider ski attire, as featured in the images above. Go to www.eider.com to find out more. 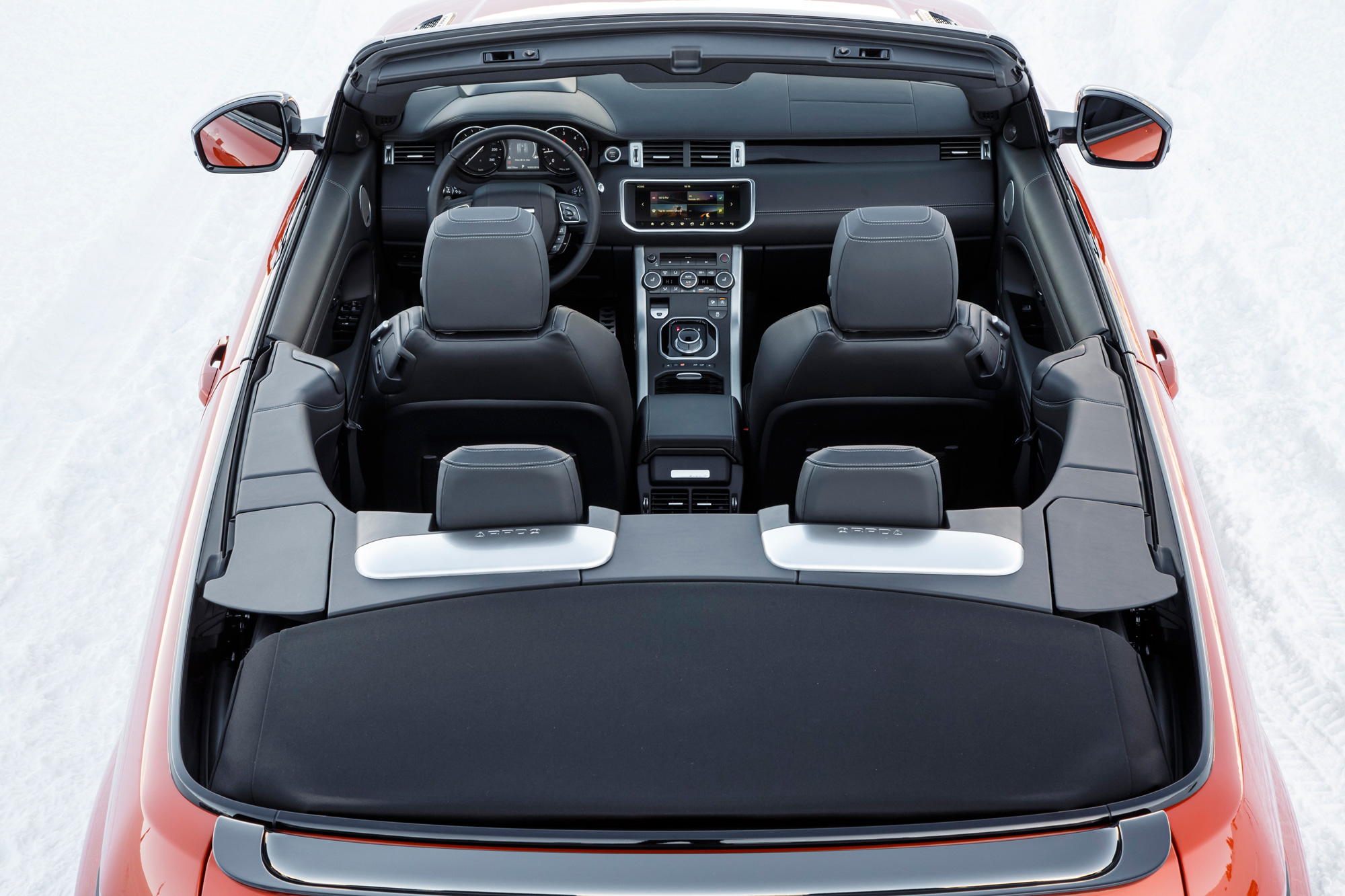