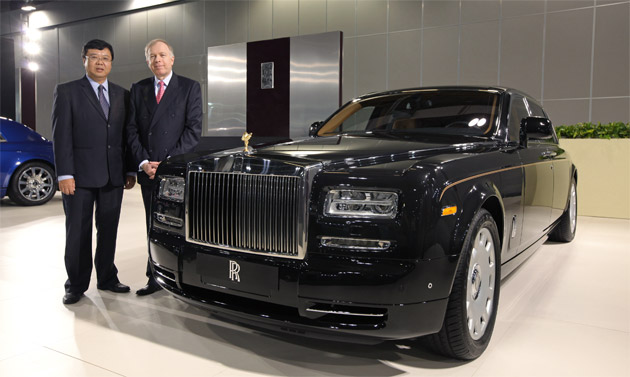 Sands China’s Phantom Series II Extended Wheelbase cars will be finished in Paiza Brown – one of the company’s unique corporate colours. The cars will also feature bespoke elements such as partition walls. Further details will be made available on delivery of the cars.

“Rolls-Royce is the ultimate symbol of luxury, prestige and comfort, and we are delighted to expand our current fleet especially dedicated to our valuable customers across all our properties,” said David Sisk, Executive Vice President and Chief Operating Officer of Sands China Ltd. “Rolls-Royce fits perfectly with Sands China’s exceptionally high standard of service and will continue to allow us to pamper our valuable customers by introducing a more personalised and unique experience when they visit our properties.”

“The delivery of five Phantom Series II Extended Wheelbase to Sands China is very significant – this is the first and largest bespoke order of this model in the Asia Pacific region since the car was launched earlier this year,” commented Paul Harris, Asia Pacific Regional Director, Rolls-Royce Motor Cars.

“This again reaffirms the decision to establish a Rolls-Royce dealership in Macau – a market with a burgeoning economy,” added Dan Balmer, General Manager-Asia Pacific.

Samuel Sun, General Manager, Rolls-Royce Motor Cars Macau, added, “We are thrilled to announce the order of five Phantom Series II Extended Wheelbase cars to Sands China Ltd. We are optimistic that this is the first of more corporate orders to come and remained committed to offering all our customers peerless motor cars with unrivalled service experience.”

For 2012, the pinnacle Phantom family has been thoughtfully updated with contemporary yet timeless design enhancements that frame the introduction of cutting-edge technologies which significantly improve the car’s drive-train, ease-of-use and connectivity. LED Headlights, a new 8-speed automatic gearbox and rear differential are some of the updates incorporated into the new range of Phantom cars. Showcased during the exposition are highly bespoke Phantom Series II Extended Wheelbase and Phantom Series II Coupé cars. Finished in Infinity Black and graced by a gold Spirit of Ecstasy, Phantom Series II Extended Wheelbase further demonstrates the capabilities of the Rolls-Royce bespoke team in the interior of the car by featuring drinks cabinet and coolbox for individual seats. The Mazarine Blue Phantom Series II Coupé comes with a brushed steel bonnet and is graced by an illuminated Spirit of Ecstasy complemented by illuminated bespoke treadplates. Starlight headlining – one of the most popular Bespoke requests in Asia – is also featured on both cars.

“We are delighted to present Phantom Series II in Macau for the first time.” said Paul Harris, Regional Director, Rolls-Royce Motor Cars Asia Pacific. “Phantom sparked a Rolls-Royce renaissance in 2003, establishing itself as the benchmark for automotive luxury and refinement. Our discerning customer base in Macau has long embraced Phantom as the perfect conveyance in which to do business or relax in imperious luxury. As a result, the China (Macau) International Automobile Exposition is an excellent platform for us to showcase our cars.”

Dan Balmer, General Manager for Rolls-Royce Motor Cars Asia Pacific, added, “A Rolls-Royce Phantom is a blank canvas from which our customers commission their highly Bespoke motor cars to reflect their tastes, lifestyles and even businesses.”

Mr. Samuel Sun, General Manager, Rolls-Royce Motor Cars Macau, said, “We are pleased to present Phantom Series II during this automobile exposition in Macau. Both Phantom and Ghost have been very well-received by Macau customers. With the opening of our showroom in March, we continue to see potential and a positive business response in the Macau market.”

LED headlights as standard
Phantom’s striking new front-end, with restyled bumpers and rectangular light apertures, perhaps best encapsulates the essence of the significant changes that lie beneath. Rolls-Royce now offers fully-LED headlamps as standard for Phantom Series II. As well as delivering a characteristic whiter light, augmenting safety and reducing the likelihood of driver tiredness, these allow for the introduction of new technologies that better control lighting. Curve light functionality, for example, uses electronically-controlled reflectors to focus headlamp beams in the direction of travel, providing greater illumination of the road ahead when cornering. Adaptive headlamps change the cone of light projected onto a road – effortlessly of course – in response to different driving speeds.

Effortless as standard
Every part of the Phantom experience should be effortless, so new driver assistance technologies and a modern user interface with re-designed multi-media controller, have been designed for Phantom Series II. The new satellite navigation system has been fully updated. Information, maps and video content is presented on Phantom’s larger 8.8-inch control centre display, a feature underlined by eight programmable bookmarks presenting access to key functions at a driver’s fingertips. Front, rear and top-view camera systems further augment ease of manoeuvring. When reverse parking, for example, rear path prediction automatically deploys on the screen.

Enhanced drive-train
The word ‘waftability’ has long been part of the Rolls-Royce lexicon, with models past and present famed for their magic carpet ride. Phantom Series II reinforces the company’s reputation for both. A new 8-speed automatic gearbox and rear differential enhance already exemplary driving dynamics perfectly complementing the V12 direct injection engine. Fuel consumption improves by 10 percent on the combined cycle and, as a result, CO2 emissions fall from 388 to 347 g/km.

Bespoke
Phantom is considered the ultimate automotive canvas for the Rolls-Royce bespoke programme. A selection of 44,000 external paint hues, limitless wood veneer options, leather styles and colours are available – allowing for personalisation that is practically endless. A team of bespoke designers, along with talented craftsmen and women, produce cars that are ‘built to order’ by Macau customers. Ninety percent of all Rolls-Royce Phantoms that come to the Asia-Pacific region are bespoke.

History
Rolls-Royce Phantom Series I was launched on 1 January 2003, following a five-year development phase, under new ownership of BMW Group. In addition to bringing a flagship Rolls-Royce to life, the company also built its state-of-the-art headquarters and production site on the historic Goodwood estate, in the heart of the English countryside. This unprecedented achievement was all the more impressive for a brand that shouldered a weight of expectation that came with the famous Rolls-Royce name and Spirit of Ecstasy as its mascot of excellence. In 2005, Rolls-Royce launched Extended Wheelbase to join Phantom Saloon. This was followed by the presentation of unforgettable open-top motoring courtesy of Phantom Drophead Coupé in 2007 and the ultimate grand tourer – Phantom Coupé – which debuted in 2008. The Phantom family was joined by the award-winning, less formal Ghost range featuring Ghost and Ghost Extended Wheelbase. Phantom’s iconic appeal and position as a luxury good without equal has seen its sales increase through the years, along with Ghost. In 2011, Rolls-Royce delivered 3,538 cars to customers worldwide, up 31 percent on the previous year’s total of 2,711. This represented the highest annual sales in the 108-year history of Rolls-Royce, the previous best being 3,347 cars sold in 1978. Sales growth was reported across all regions with Bespoke content at highest-ever levels, reaffirming the brand’s position at the pinnacle of the ultra luxury segment.

Rolls-Royce Motor Cars Macau is located at Shop A2, Ground Floor of FIT Center. It was officially opened on 20 March 2012. The showroom houses two Rolls-Royce motor cars and fully complies with global standards to ensure an unrivalled experience when customers commission and purchase their Rolls-Royces.