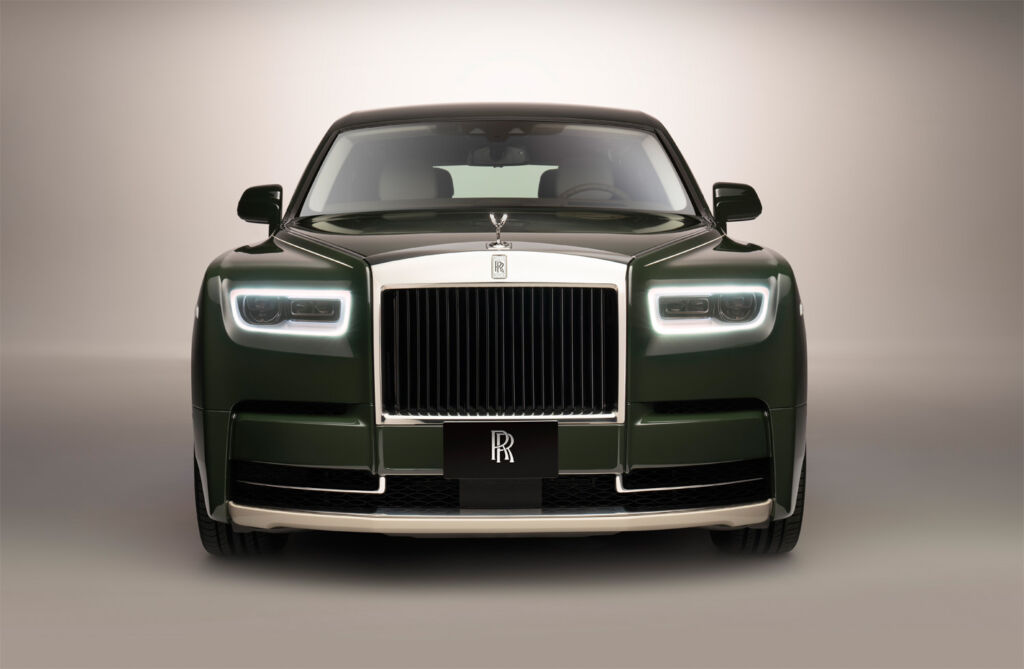 When two renowned companies come together to collaborate, you’re bound to get something special, and this is precisely what happened when Rolls-Royce Motor Cars and Hermès pooled their skills. The result is the breathtaking Phantom Oribe which brings the qualities of luxurious air travel to the road.

Everything coming out of the Rolls-Royce HQ in Goodwood is unique, but the vehicle we are concentrating on in this article, the Phantom Oribe, takes even Rolls-Royce’s much-vaunted poise and luxury up a notch.

In collaboration with Hermès, Rolls-Royce Motor cars have co-created an incredible bespoke Phantom. The vehicle was designed and handcrafted by a combined team of bespoke professionals in Goodwood and a team of Hermès craftspeople in Paris. 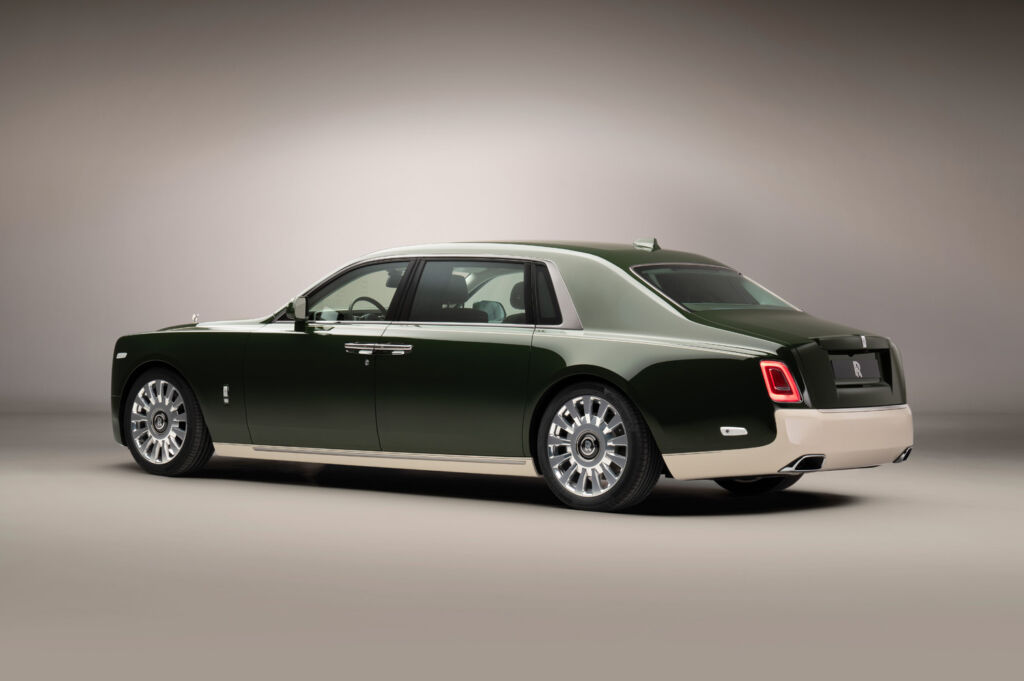 The Phantom Oribe was commissioned by Japanese entrepreneur Yusaku Maezawa who wanted a car that reflected his passion and personality. Yusaku Maezawa’s goal was to have a vehicle that mimicked the serene exclusivity of private air travel on the road; essentially, he wanted a ‘land jet’. 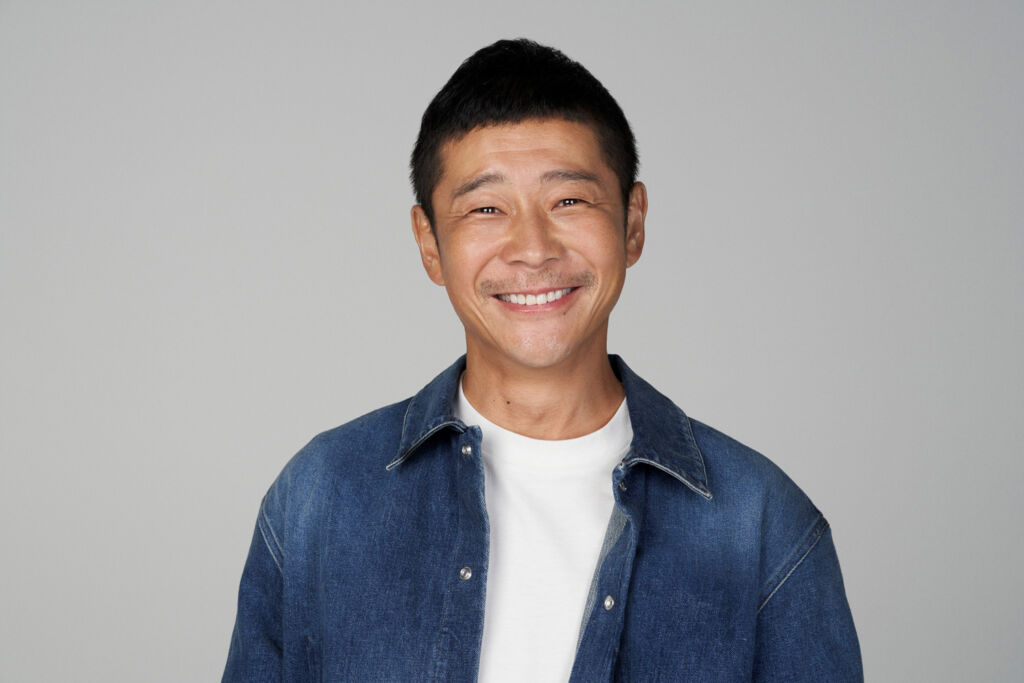 Yusaku Maezawa is a Japanese billionaire and renowned art collector. He was born in 1975 in Kamagaya, Japan, so it’s fitting the Phantom is painted using Oribe Green and cream, which are characteristic of Japanese Oribe ware. The car has a two-tone exterior with the upper part finished in green, a bespoke colour created exclusively for Maezawa. In what is an unusual move for the luxury carmaker, they’re allowing him to use it on his private jet.

The bespoke Oribe Green colour took the specialists at Goodwood’s Surface Finish Centre many months to develop. They wanted to ensure it captured the lustrous deep-green glaze which characterises the 16th-century ceramics collected by Maezawa. As mentioned, the car is two tones with green at the top. Underneath this is a cream-white lower section which together pays homage to the highly-prized ceramics. 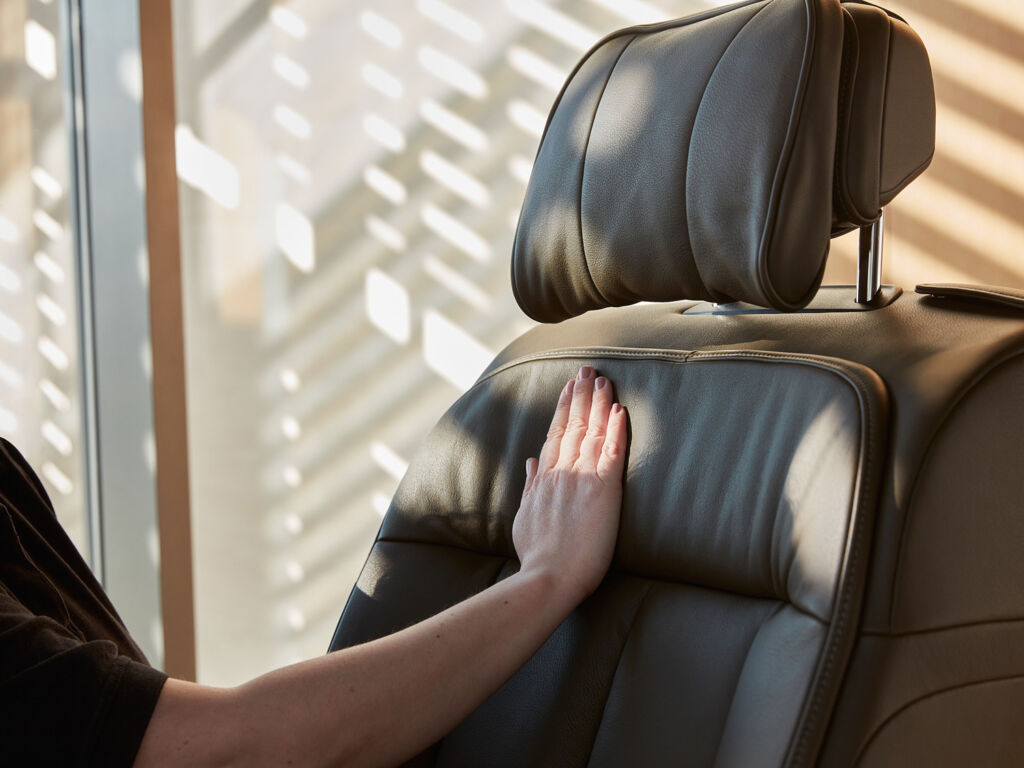 The colour scheme is not only found on the exterior of the car. It has also been expertly implemented throughout the interior of the car. This was only made possible thanks to the combined skills at Goodwood and the Hermès designers and craftspeople in Paris. Both teams were highly conscious of how important this collaboration was and ensured that the vehicle showcased their combined skills to maximum effect.

Inside the Phantom Oribe are swathes of Hermès Enea Green leather. The very special leather is not only to be found on what people regard as the ‘usual places’, but it is also included on multiple touch-points such as the duchess handles, steering wheel, gear selector and the controls for the climate settings. 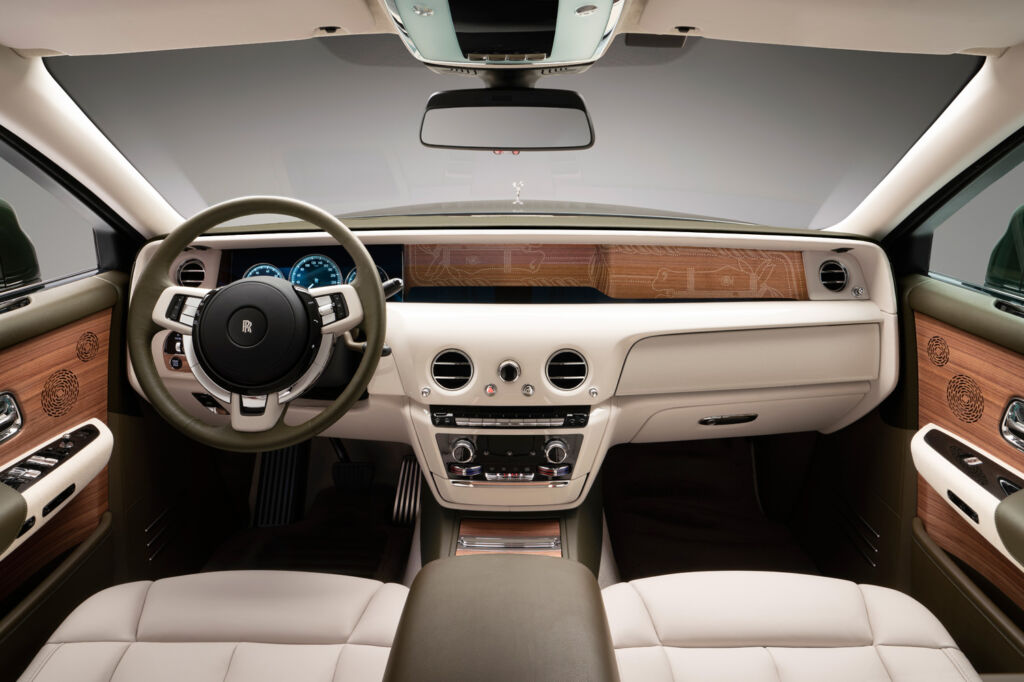 The leather from Hermès flows around the upper instrument panel, parcel shelf and interior panels. It can also be found in more conspicuous places such as the decanter stowage department, the glove box, champagne cooler and luggage compartment lining.

To show that this was truly a joint collaboration between two renowned design houses, the lid of the glove compartment is embossed with the signature Habillé par Hermès Paris. 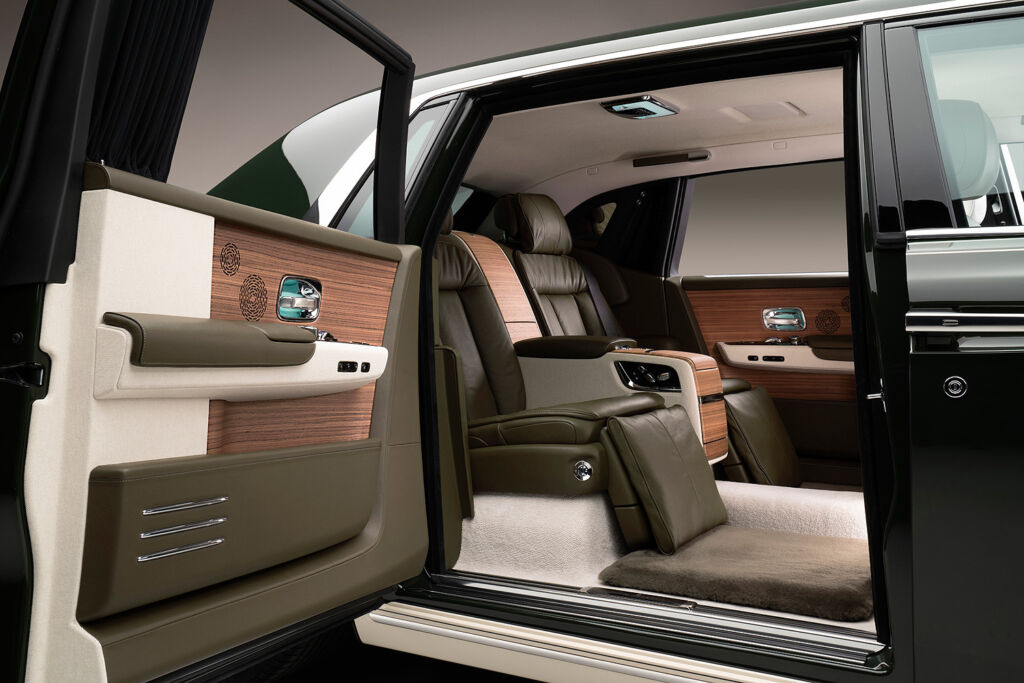 The headrest cushions and calf supports of the Phantom Oribe’s rear seats host delicate Hermès piping, and the footwells have lambswool floor mats. In another first for Rolls Royce, the canvas on the door armrests, signature headliner and consoles all feature the Hermès ‘Toile H’.

Although the interior seems like it’s all Hermès craftsmanship, there is a great deal of Rolls-Royce handcraftsmanship and Bespoke design visible inside the Phantom Oribe. These include wooden speaker frets, walnut veneer on the doors, the back of the picnic tables and the centre and rear consoles. 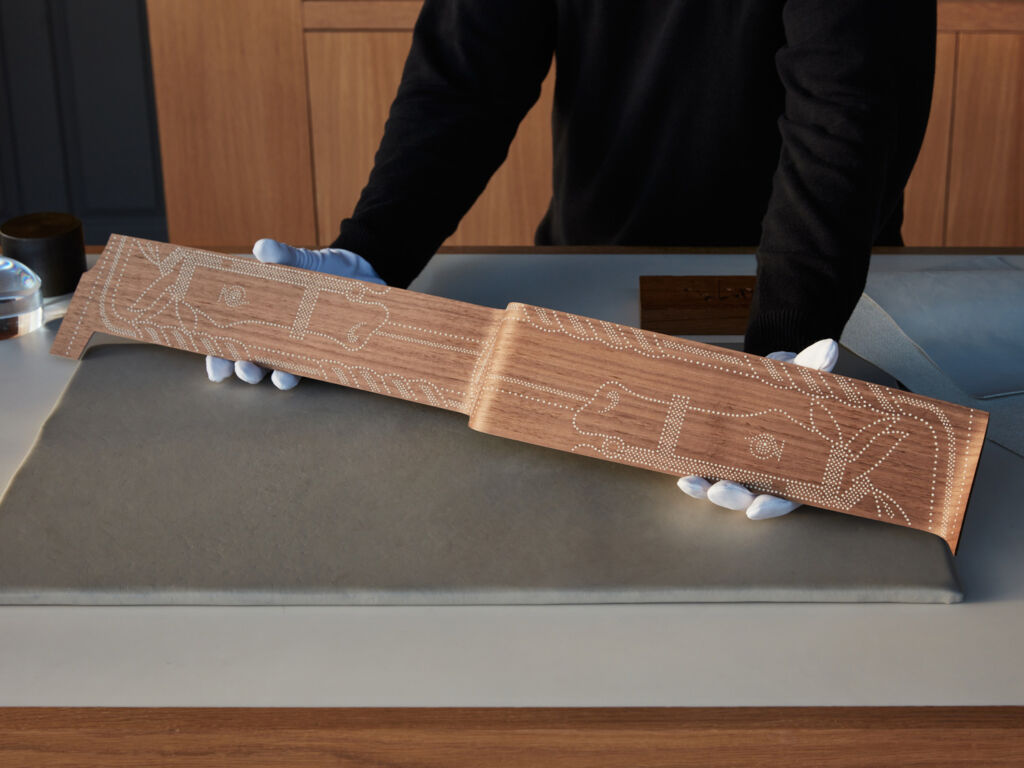 The gallery in the Phantom Oribe runs the full length of its fascia. The artwork was commissioned by Hermès and is based on a design from the French illustrator and artist Pierre Péron (1905–1988), who was integral in some of Hermès’ most iconic scarves designs. The work was hand-painted on Open Pore Royal Walnut and took inspiration from the Hermès horse motif. The artwork is presented as if it was on display in an art gallery behind glass. 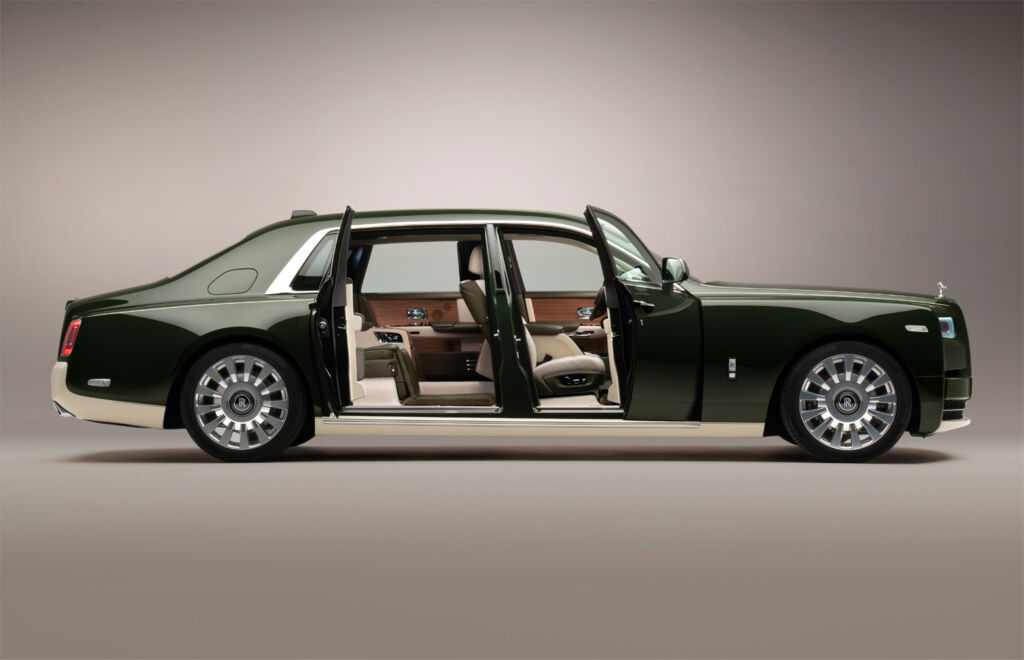 If you’re wondering how much the Japanese Billionaire paid for the Phantom Oribe, your guess would be as good as ours! Suffice to say that for a car as bespoke as this, using the combined skills and know-how of two of the world’s greatest design houses; it wouldn’t have been cheap!