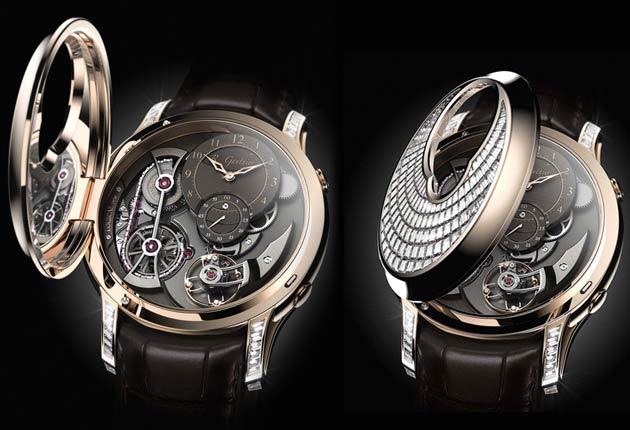 What has 181 invisibly set baguette diamonds amounting to nearly 7 carats and a movement awarded the Best Men’s Complications Watch at the 2013 Grand Prix d’Horlogerie de Genève? Well, it’s no longer a secret, it’s the stunning Logical One Secret by Romain Gauthier.

With its cover closed, hours, minutes and seconds are embraced in a glittering ocean of diamonds cascading right down to the lugs. The invisibly set baguette diamonds make for an ever-changing panorama of constantly glittering and sparkling reflections. A gentle squeeze on the pusher discreetly set into the caseband at 4 o’clock lifts the cover, revealing the intricate complexity of the award-winning movement – it may read like a paragraph from a romance novel, but it is not, this is an accurate description of this stunning timepiece.

The fully integrated cover follows the form of the sapphire crystal underneath to create a canvas for artists of many mediums, e.g. gem setting, guilloche, miniature painting, enameling, engraving to ‘paint’. The craftsmanship required for invisible diamond setting is even more demanding in that it requires not one but two skilled artists: gem setter and diamond cutter. To be invisibly set, each and every diamond has to be carefully grooved, with each cut running the very real risk of breaking the stone. However, while invisibly set diamonds are very difficult to accomplish, the effect is spectacular as, without visible support, the gems look larger and light can reflect and refract throughout unimpeded in an explosion of brilliance. And besides the sheer magnificence of a cover and lugs blanketed in 100s of stunning diamonds, they also provide a practical advantage in creating an extremely scratch resistant case.

Logical One features the quadruple-patent-pending Romain Gauthier flat chain-and-fusee style constant force system with ruby chain links, ergonomic push button winding system, dial-side visible balance, mainspring barrel with sapphire inserts, plus a 60-hour power reserve indicator. Constant force is one of the holy grails of horology and with Logical One, Romain Gauthier has reinvented the chain-and-fuse – one of the oldest and most traditional methods of supplying constant force to a watch/clock movement – making it both more reliable, more effective… and more constant.

The movement for Logical One was entirely conceived, developed, designed, produced, decorated, assembled and regulated by Manufacture Romain Gauthier. Highly polished sharp internal bevelled angles in the movement plates and bridges are the hallmark of superlative hand finishing because, to date, machines are not capable of milling and polishing sharp internal bevels.  With Logical One, Romain Gauthier has gone a step further still in creating double-angle bevels with sharp internal angles, which give the effect of border. And yes, as you can see from the images, if you don’t want diamonds, you can always opt for rubies!

Who is Romain Gauthier?

Romain Gauthier is an exceptional watchmaker, born in 1975 in Le Sentier, in the picturesque Vallée de Joux, at the heart of fine Swiss watchmaking. It was there that he developed a passion for traditional haute horlogerie blended with clean, contemporary design and innovative micro-engineering. After studying precision-mechanics, Romain gained a diploma as a constructor of precision machinery. In 1997, he started his first job as machine programmer/operator and over the following years, Romain managed and grew the department into one of the best – equipped and most efficient production facilities in Europe. Determined to create his own watch brand, Romain completed an MBA in 2002. His final thesis – passed with distinction – was the business plan for Montres Romain Gauthier. He then began work on the timepieces themselves. “I knew that a good movement was the basis of everything I planned to build, so I started with that.” In 2005, after three years of working in secret, Romain launched his brand in Baselworld 2007 with the Prestige HM, featuring his own in-house manufacture movement. The Prestige HMS followed in 2010, Logical one in 2013 and Logical one Secret in 2014.