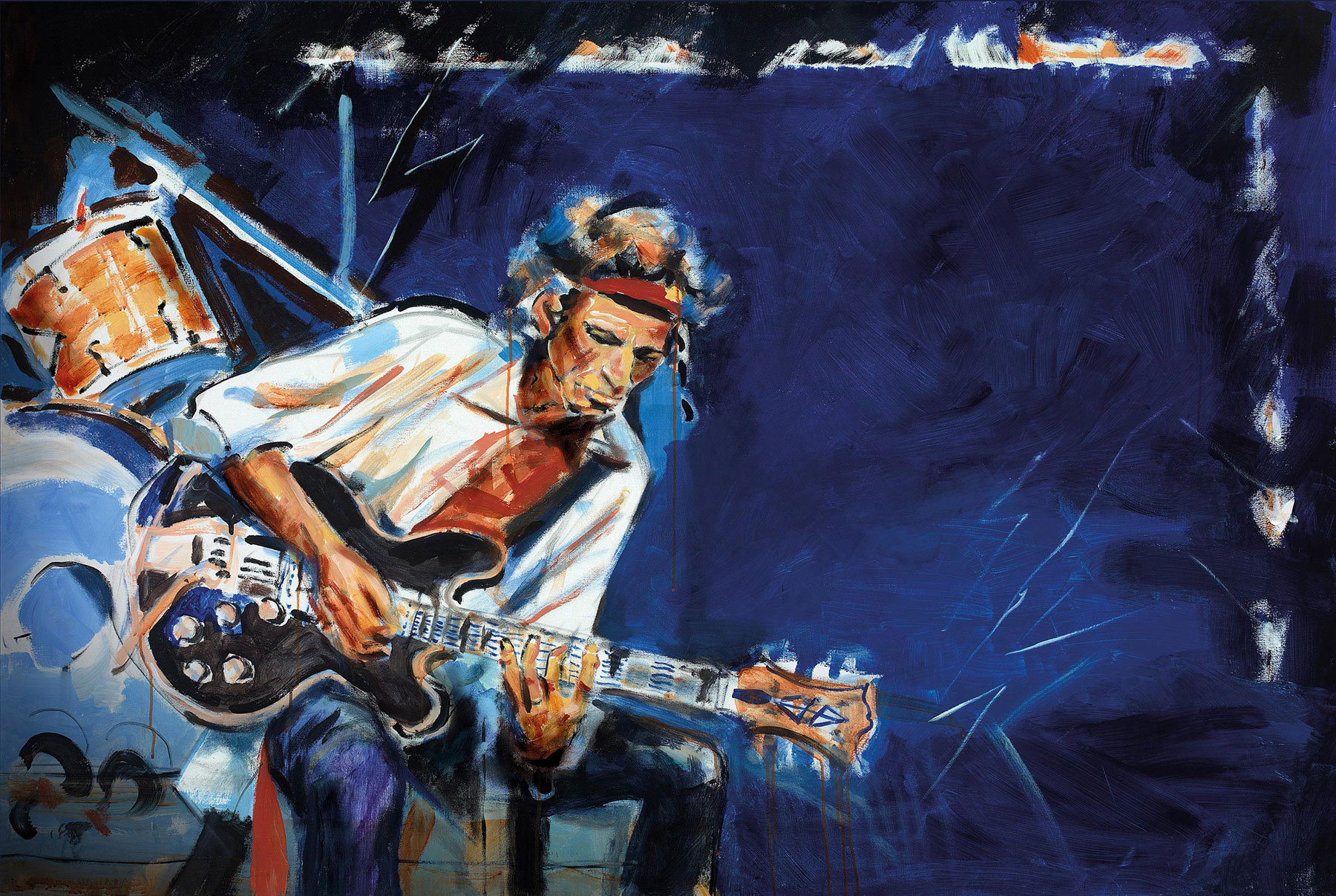 Taken from Ronnie Wood’s personal archive, the ‘Private Collection’ comprises some of the most sought after limited editions sold in his artistic career to date. Originally published between 2005 and 2009, a selection of these rare editions will be available to buy from Castle Fine Art galleries nationwide after Wood decided to make his personal archive available to the public.

The carefully curated works in the collection – all hand-signed by the artist and embossed with the Private Collection seal – provide a unique and revealing insight into the world of the Rolling Stones. The bold, powerful paintings capture the essence of the band on stage and in the studio, as seen through the eyes of guitarist Ronnie Wood.

In “Flatbed ’75 – 30 Year Anniversary”, Wood documents one of the most famous moments in rock and roll history. As the world’s press gathered in a New York City hotel in anticipation of the announcement of the band’s upcoming “Tour of the Americas ‘75”, The Rolling Stones made their tour announcement in true rock and roll fashion by performing “Brown Sugar” live on a the back of a flatbed truck as it drove down Fifth Avenue, scattering tour date flyers as they went.

Ronnie Wood’s creative brilliance has had a profound influence on popular culture; not only through his music but through his lesser-known talent as an artist.

Before beginning his musical career he received formal art training at Ealing College of Art, London and throughout the years, the artist and the musician have been inseparable. It is as natural to find him with a pencil as with a guitar – as he claims, “there is no kind of therapy like the one you have from starting a picture and then seeing it through to the end.”

Ian Weatherby-Blythe, Managing Director for Castle Fine Art said: “Ronnie Wood and his fellow Stones band members continue to draw the crowds – the band’s popularity is only growing with their hugely successful 2016 AMÉRICA LATINA OLÉ tour, and the recently opened ‘Exhibitionism’ at the Saatchi Gallery.

“Castle Fine Art is offering the public the chance to own their very own piece of rock and roll history with this new collection of works from Ronnie Wood’s personal archive, all hand-signed by the artist himself.

“The ‘Private Collection’ is eminently desirable and highly collectible – it will draw the eye of all who happen upon it. This pictorial journey through the annals of rock and roll is a joy to behold.”

The Ronnie Wood ‘Private Collection’ – Where and how