Château Gütsch in Lucerne, Switzerland is a boutique hotel which dates back to 1888 when it was built by the architect, Emil Vogt, as a private residence. Inspired by the Bavarian Neuschwanstein Castle, it was extensively refurbished to its former glory between 2012 and 2014 by the British interior designer, Martyn Lawrence Bullard.

Located high up on the hillside, the 27-bedroom, 50,000 square foot property, boasts stunning views over the old city below, the glistening Vierwaldstätter Lake and mountains that surround it.

We stayed in one of the standard double rooms on the third floor offering a spectacular vista of Lucerne, tastefully dressed with period furniture, soft seating and a blue and white floral décor. Separated from the sleeping area by a frosted sliding door, the spacious bathroom featured a large walk-in shower lined with sweet-smelling accessories from Chopard, as well as crisp white towels and gowns.

When it comes to dining, there are two principal eateries on-site. The first is “The Gütsch Bar”, where there is a menu of light snacks (we tried the very filling grilled vegetable, olive and lemon panini priced at 19 CHF per person) and more comprehensive meals such as “fish of the day” and spaghetti. The second is the 110-cover “Restaurant Château Gütsch”, led by Executive Chef, Andreas Haseloh, which has been designed with large windows overlooking the city and the addictive alpine panorama.

During our two-night stay at Château Gütsch, we ate in the latter for lunch and dinner. At midday, there is a small menu which offers a single choice of meat (“Zurich-style” beef fillet with rice and broccoli), fish (tasty red mullet with pommes parisienne) and vegetarian dishes for the mains, plus one starter which was namely a salmon tartare decorated with lettuce leaves, corn fritters and a dash of olive oil, all accompanied by a deliciously-creamy barley soup. For three courses, expect to pay 49 CHF per person which also encompasses the green apple, poppy seed and yogurt sweet.

For the evening meal back in Restaurant Château Gütsch, lights are dimmed and candles are lit, thereby creating a romantic-style ambiance. The dinner menu is clearly much more comprehensive than that of lunch, and there is a large choice of options which rises up to six courses, with an impressive wine list to match. Paired perfectly with a Riesling x Silvaner Rosenau white wine from Lucerne, I sampled the very rich, but enjoyable starter of mousse of burrata with tomato chutney and quinoa-olive salad. This was followed by a mushroom risotto with parmesan crackers and baby leek from the same Vegetarian menu. My partner, on the other hand, chose an equally successful succulent duo of veal with roasted onion polenta, root vegetables and cabbage from the Classic menu.

For dessert, there are several to be found at the base of each menu, in addition to numerous homemade ice creams. I opted for the nougat with blood orange which was somewhat scarce in ingredients based on its description and price, but the elegant and creative presentation certainly made up for it. My partner chose a refreshing combination of sorbet finished with a glazed sugar crisp. The second evening, I went for the Swiss cheese platter with pears, dried fruits, fig mustard and nuts which followed the same trend as that of the first night – very small, and not very substantial. There was however a nice touch at the end of dinner when a large bowl arrived filled with complementary truffles and small pieces of scented marshmallows and nut biscuits, sitting on a generous helping of crushed chocolate. This was one of the best endings to a meal that I have ever had.

Aside from the very efficient level of service throughout, if something is not to your liking when your chosen dish arrives, then the team of chefs will not just modify it, but cook it again from scratch, such is the commitment to complete customer satisfaction. Dietary requirements are accommodated, but this can prove a little more challenging due to the language barrier and the number of staff to continually remind. 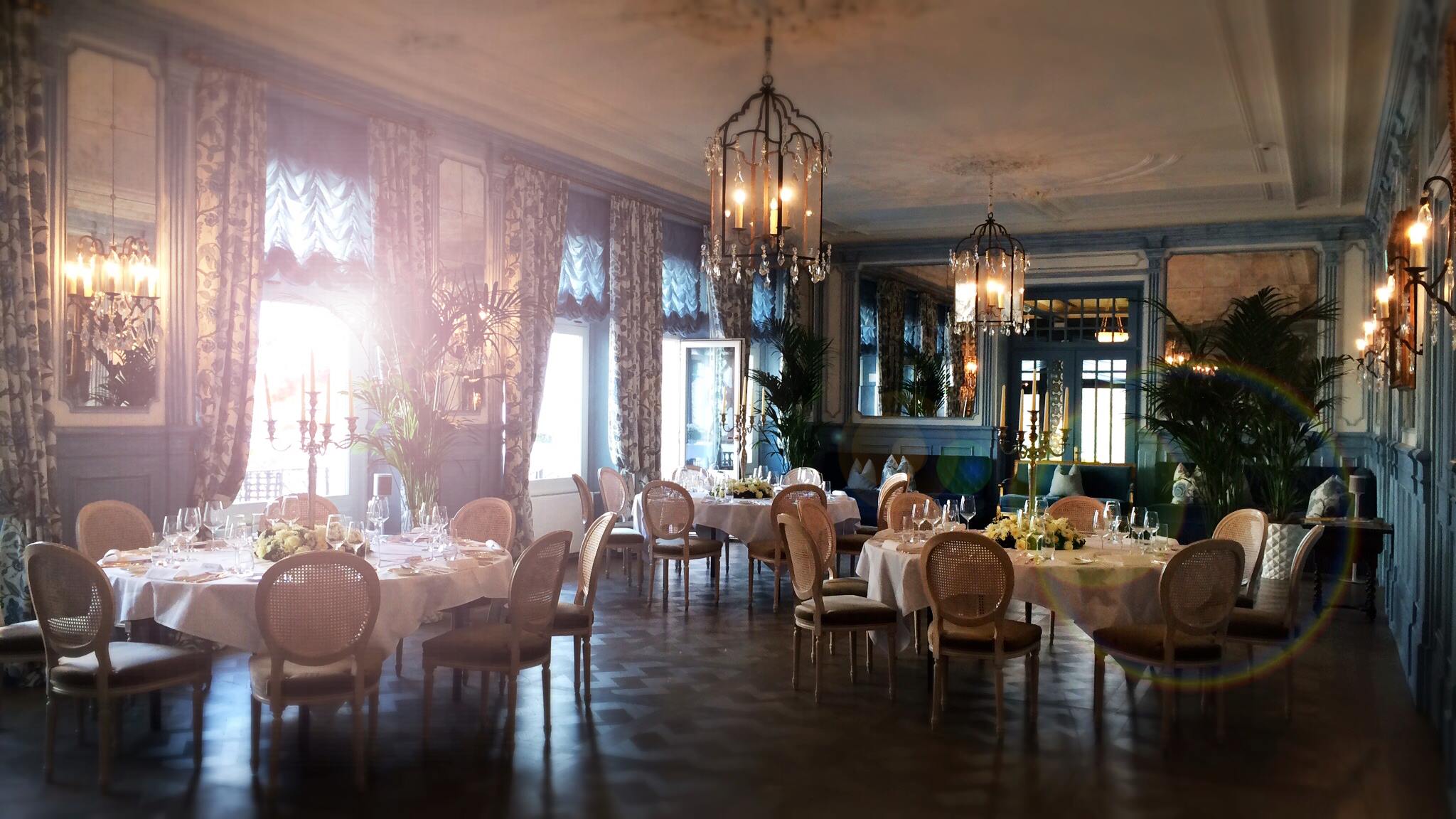 For wine aficionados, the hotel possesses its own stone-walled cellar, where tastings can be arranged on request with the property’s highly-knowledgeable and enthusiastic sommelier in a cool 17 degree setting. From the hotel’s collection of 700 bottles, we sampled five different Swiss varieties including a 2012 Clos des Abbayes Dezaley Grand Cru from Vaud (a perfect match for fish) and a Weinbau Ottiger dessert wine, whilst being taught about their origin.

The daily evening turndown service is impressive – a newsletter-like round-up of the day’s news from around the world is placed on the bed with complementary Swiss chocolates on the side table. Each of the pillows are bunched up to resemble mountain peaks, whilst pyjamas are neatly arranged across the duvets. Fast forward a few hours, and on a clear day, early wakers are rewarded with a truly magical sunrise over the river and mountains, a scene that stays etched in your memory, such is the beauty. The breakfast in Restaurant Château Gütsch takes the form of a small buffet featuring various cheeses, fresh bread, cold meats, muesli and fruit, amongst other delicacies. There is also a good selection of hot dishes (available at no extra cost) such as omelette, eggs, pancakes and waffles, which are all cooked on demand.

Last, but not least, another bonus when staying at this property, is that for keen smartphone users, the free Wi-Fi service is excellent throughout the building, making surfing the Internet and staying in touch with peers, seamless.

In summary, Château Gütsch is an architecturally-beautiful hotel that combines exceptional service, spectacular views and tranquillity, thereby making it the perfect destination for a romantic getaway or a short city break.

Château Gütsch is around a 15 minute drive away from the centre of Lucerne (about 25 CHF for a one way ride in a taxi).

We flew British Airways (www.britishairways.com) from London Heathrow to Zurich.