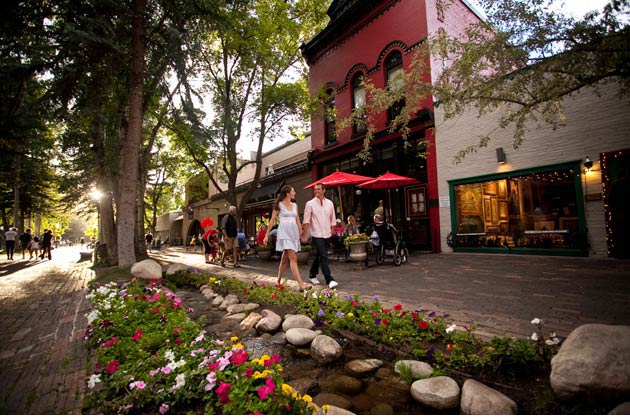 Most people will have heard of the incredible skiing to be had in the American mountain town of Aspen in the state of Colorado. Ski enthusiasts tout it as an all-round ski resort experience with world-class facilities. But once the powder has melted, isn’t a ski holiday a little dull?

Not so in Aspen as I found out during a recent trip. It will tempt you to take the last run early just so you can fit it all in.

Aspen wasn’t built for skiing, with its roots dating back to the Wild West days. In the 1890s, its silver-mining boom made it a thriving place to stay. We took a trip into Ashcroft Ghost Town and hiked through the silver mining area which is located 10 miles south of Aspen. A few buildings remain standing as a testament to the town’s past. Our guide told us that silver was discovered by two prospectors in the spring of 1880 and they soon helped build the conurbation. By 1885, it was home to about 3,500 people, six hotels and 20 saloons. But as quickly as the town grew it went bust because silver deposits were shallow.

The gentle walk continues along castle Creek next to wildflower meadows and mountain vistas. The Aspen trees are plentiful in this area and help provide shade in the heat as well as a natural sunscreen. In days gone by, people would rub the powder off the tree and use it as a sun protector. Just as well. Situated in the Rocky Mountains, Aspen is located at 7,908 feet above sea level, so you’re closer to the sun than you think.

There’s no better way to get around Aspen in the summertime than on a bike. So prestigious is cycling that the USA Pro Cycling Challenge seven-day race has made a stop in the town in each one of its three years because of the community’s strong support for the sport. So whether you’re a pro or an amateur, bicycles provide the best way to keep the legs working and the adrenaline flowing in the long months between the closing and opening day of the ski season. 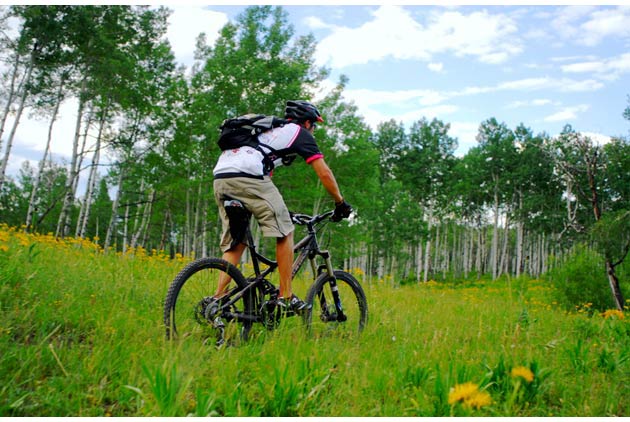 Wanting to take it easy, our group took a 9-mile easy downhill bike ride along a beautiful scenic trail to Woody Creek Tavern. It has to be one of the best ways of spending some quality time in the saddle while taking in the magnificent views around you. The short trip took a lot longer because it was hard not to stop and take pictures along the route. Still, the leisurely ride helped us work up an appetite and we were only too pleased to take a break at the tavern for lunch. It’s a great place to mingle with locals and visitors alike. There are many trails dotted around the area for all levels of rider. Classic excursions such as the Rim Trail in Snowmass, the Government Trail between Snowmass and Aspen and Smuggler are popular routes and all are easily accessible. Each boasts spectacular views but perhaps one of the most scenic trails has to be the ride down the Maroon Valley from the Maroon Bells. It’s not surprising then that these are the most photographed peaks in North America. Not feeling too energetic after our earlier cycle, we took to the area by car. You really have to see the beauty for yourself to appreciate it. 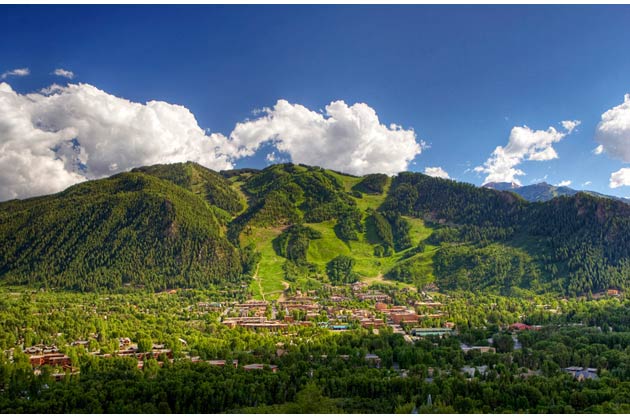 However, you just can’t get the same views of an area unless you are high in the sky – and I’m not talking about a flight into Aspen airport. We took to the skies in the form of a hot air balloon ride to experience the exhilarating vistas of the valley and do some wildlife spotting. Although it was hard to get out of bed at the crack of dawn (4.30am) for the experience, it was one that was made enjoyable by our guide captain Bubba. He kept us fully entertained throughout the 90-minute flight and was helpful in pointing out a bear that we were all so desperate to see on our trip. We soared over Snowmass and Aspen at sunrise and glided along in absolute peace. Luckily there was no bumpy landing and the ride was perfectly rounded off with a champagne breakfast in the middle of the field before most of the town had even woken up!

I’ve always liked a good adrenalin rush so I was thrilled to see white-water rafting on the itinerary. What better way than paddling for your life and riding a wave through the rushing waters of the Roaring Fork and Colorado rivers? The rivers just outside the back door of Aspen and the valley are enjoyed by experts and novices alike. Despite opting for a reliable section of the river it didn’t take long before we were drenched as we rode some big waves. And if we didn’t think we were wet enough, we were given an option to swim in the water. Personally I had quite a bit of an upper body workout thanks to the paddling motion and I didn’t have the energy to swim. I was more than happy to remain in the raft mellowing away and gazing up at the thousand foot cliffs shooting directly out of the river.

Art and culture thrive in areas of natural beauty, and Aspen is home to a number of art galleries which are often free. For creative creatures, the Anderson Ranch Center runs more than 140 workshops for novices to professional artists, as well as for children and adults. 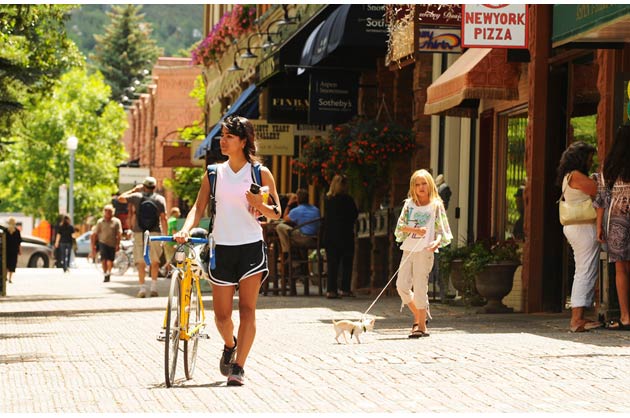 Indeed, Aspen’s flair for arts and culture means it still maintains enough small-town charm for year-round residents to call it home rather than functioning purely as a ski resort. As a result, there’s plenty to do for families. And you can’t get more wholesome entertainment than the Snowmass Rodeo. It’s been running for 40 years now and provides the ideal opportunity for the cowboys to show off their skills. The sport is said to date back to the 19th century when two groups of cowboys from neighbouring towns met to settle an argument over who was the best at performing everyday cowboy tasks. We watched with slack jaws as they battled it out across the arena competing in bull riding, team roping, and barrel racing. But for me it was watching the children participate that provided the best entertainment. The Mutton Bustin’ event was a real crowd pleaser. Little Buckaroos ‘cowboy up’ and hold on to a woolly sheep for eight nail-biting seconds.

When it comes to refuelling between adventures, then there’s always music in Aspen’s thin air. One of the most popular musical events is the Summer of Free Music on Fanny Hill, which draws thousands to picnic, lounge or dance the evening away and is one of Snowmass’s most cherished community traditions. Belly Up is another popular intimate live music venue that hosts over 300 concerts a year. But if you’re just looking for a quiet drink then a visit to one of the oldest bars in Aspen is recommended. The J-Bar still has its original pressed-tin ceiling and walls decorated with old newspaper clippings. Order an Aspen Crud just for old time’s sake. The signature drink is a vanilla milkshake hiding a good dose of bourbon.

For this travel feature we stayed at the Viceroy Snowmass and Hotel Jerome. For more information visit aspenchamber.org  & snowmasstourism.com.