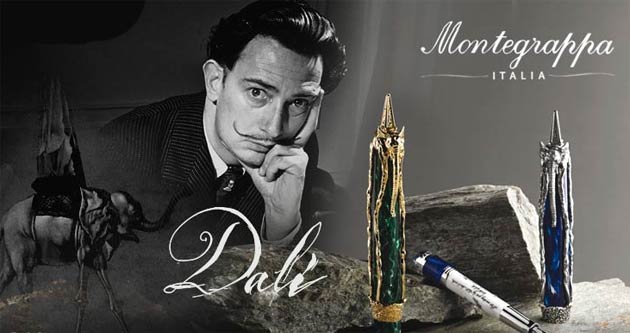 Salvador Dalí’s name conjurs up many words – genius, artist, strange moustache, but one thing that is undeniable is the artworlds love of his unique and original styling applied to his painting and sculptures.

Montegrappa Genio Creativo Salvador Dalí Limited Edition.
The world famous surrealist artist who’s fame is so great that he is known just by his surname has been chosen for the latest collection from Montegrappa’s Genio Creative series, the company’s most exclusive range of pens. Previously only two individuals have been honoured in this series, the greatest of all luthiers, Antonio Stradivari (in 2007), and the remarkable painter and sculptor, Amedeo Modigliani (in 2008). The third ‘creative genius’ in Montegrappa’s roster of peerless artists – Salvador Dalí, was a visionary who personified surrealism, he was also a writer, filmmaker and designer – truly the 20th Century equivalent of a ‘Renaissance Man’

Dali was blessed with a high level of technical skills coupled with a unique visual sense. His works including the Persistence of Memory, the universally familiar surrealistic landscape of soft, melting pocket watches painted in 1931, and his 1944 work, Dream Caused by the Flight of a Bee Around a Pomegranate a Second Before Awakening have inspired many subsequent generations of fine artists.

Gian Lorenzo Bernini’s sculpture, the ‘Pulcino della Minerva’, unveiled in February 1667 and which still stands outside the basilica of Santa Maria sopra Minerva in Rome was a major inspiration for Dali. The sculpture portrays an image from the Renaissance novel, Hypnerotomachia Polyphili of 1499 and had a dream-like quality. Dali took some of the aspects from the sculpture including an elephant, incorporating it within one of his paintings, stretching the legs to unreal lengths in his own unique style.

Using this painting as a base, Montegrappa’s craftspeople have transformed these noble beasts, portrayed ‘with long, multi-jointed, almost invisible legs of desire along with obelisks on their backs’ into miniature manifestations of Dalí’s art. On the Genio Creative Dalí pen, the elephant embraces a barrel of Mediterranean blue celluloid for the silver edition, or in malachite green for the solid gold version. When the pen is opened, a quote from the autobiography, The Secret Life of Salvador Dalí, is inscribed on the sterling silver inner barrel. 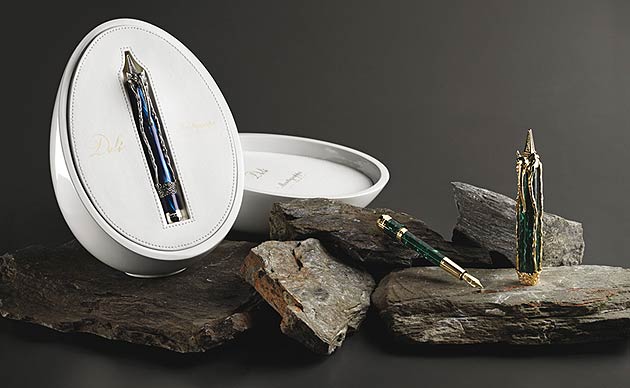 As with many of Montegrappa’s pen collections, the series will be limited with 1000 sterling silver fountain pens and 989 roller-ball pens, denoting 1989 – the year that Dalí died. 19 solid gold roller-ball pens and 61 fountain pens will represent the year he created the 1961 jewellery, The Space Elephant. The pens are packaged, appropriately, in an egg-shaped container, in recognition of another Dalíesque image. For the Dali, the egg symbolised hope and love.

This project has been supervised and licensed by the Fundació Gala-Salvador Dalí, the cultural institution created by Salvador Dalí himself in 1983. Salvador Dalí personally chaired and ran the Fundació until his death. The Kingdom of Spain, Dalí’s universal heir, granted the Fundació exclusive power to manage Salvador Dalí’s estate, both material and immaterial (copyright, image and industrial property rights, registered names and other elements derived from the artist’s life and work).

The Fundació runs the Dalí Theatre-Museum in Figueres, which presents the most comprehensive collection of the artist’s work, the Gala Dalí Castle-Museum in Púbol and the Salvador Dalí house in Port Lligat, Cadaqués.

Giuseppe Aquila, CEO of Montegrappa, says, ‘There can be no greater validation of the Genio Creativo Pen in honour of Salvador Dalí than authorisation and guidance from the Fundació Gala-Salvador Dalí.’

For its contribution to the project, Mr. Joan Manuel Sevillano, Managing Director of the Fundació Gala-Salvador Dalí says, “For our Foundation, the respect for the work of Salvador Dalí is of utmost importance. We have found in Montegrappa the perfect partner to carry out this project, with the attention and care it merits.”