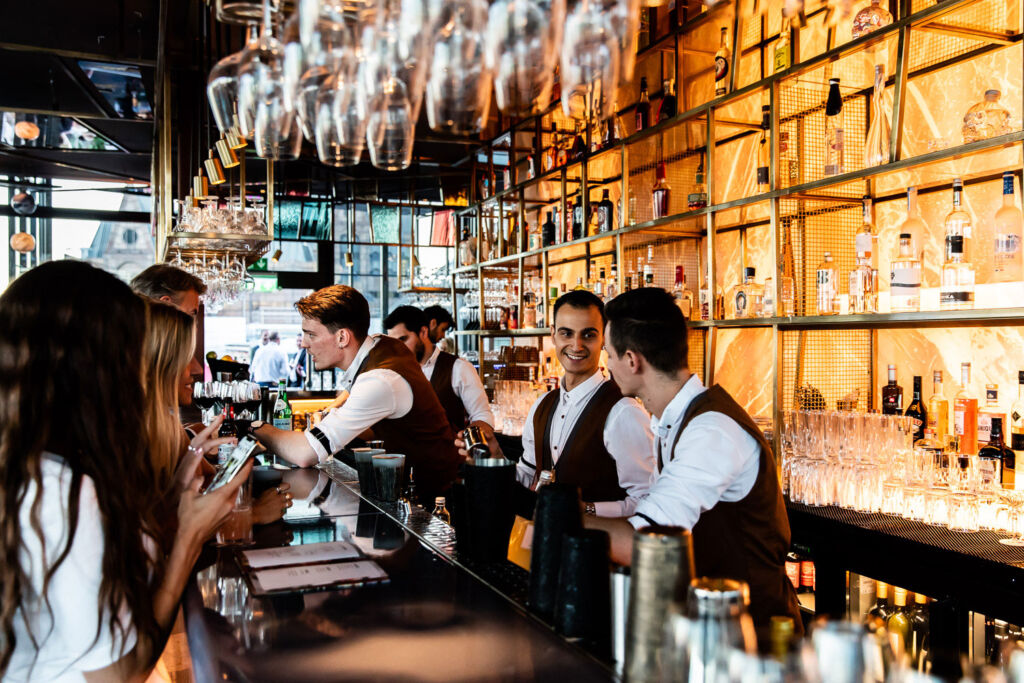 Taking care of the bar and cocktails at Savage Garden is Andre Cavalheiro. He has accumulated valuable experience at venues such as Caprice Holdings’ restaurant Daphne’s, The Ritz and The Mandeville Hotel’s DeVigne bar. He is also a brand ambassador for the Greek amber spirit, Metaxa, so he certainly knows his stuff. There are ten signature cocktails, and a choice of classic ones, which count the likes of a Bloody Mary and Daiquiri. The former are however those which are more wild and interesting, and have a bit of a story to tell.

(Some of the amazing cocktails at Savage Garden.)

Whilst we perused the food menu, I started with a “Flambard Colada” (£18), a twist on the regular Piña Colada served in a metal silver goblet garnished with thin strips of red dried pineapple. Taking its name from the first escapee from the Tower of London, it was made with rum, champagne (the dominant flavour), wormwood (a herb), pineapple and cucumber. My other half sampled the similarly flamboyant and flavoursome “Horny Beast” (£15), inspired by the Red Riding Hood tale. It used a mix of Beefeater Pink Gin, Aluna coconut rum, almond, lime, green strawberry, smoke and oak bitters, apple, rhubarb and cinnamon soda, and was served with a strawberry, lime, and black pepper shard of candy.

(Some of the dishes at Savage Garden.)

The choice of dishes at Savage Garden is relatively limited, and are split into several sections on the menu. There are some light bites or “Addictives” on offer, as well as more comprehensive options in the “Hunger Unleashed” category. For groups of four people, there are sharing plates, otherwise known as “Feasting Savagery”, which are divided into “Pescatarian” dishes such as oysters and squid sticks, “Carnivorous” for beef sliders and Poussin, and “Vegetarian”, which lists delights including charred radishes and plantain chips. They cost between £60 to £88 each which is not overly pricey if the cost is split between a few people.

I opened my meal with a small plate of Goat’s cheese, pea and tarragon croquettes (£6) from the “Small Wonders” category, which was served with some yoghurt and mint. At the same time, my guest had the very addictive plantain crisps which came with a generous helping of avocado and lime hummus. I preferred something a little more substantial than bits and pieces for my main, so I headed for the sea bass with samphire (£16), plus a separate portion of fries with black garlic mayonnaise (£5). It was beautifully cooked without any bones, and a squeeze of the fresh lemon half on to the moist flesh of the fish rounded it off perfectly. My guest had the tasty and filling pink-coloured miso burger (£15), which had slices of aubergine and green tomatoes between the buns. She joined this with a side of roasted cauliflower (£12) on a bed of Zhug (a spicy cilantro sauce that originated in Yemen), chilli roasted ancient grains and dried cranberries.

An Exclusive Chat with Reggie Pryor – The Singing Banker