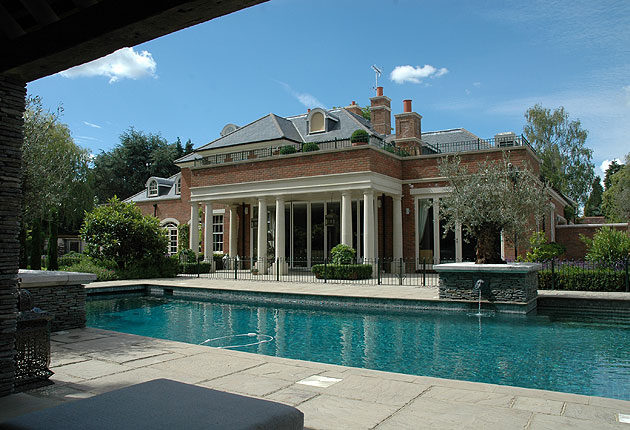 In 1859 two Americans, Frederick Olmstead and Calvert Vaux, won a competition to transform an 800 acre wilderness into an idyllic landscape, which became Central Park, Manhattan, the most famous park in the United States. They were the first, self-styled, ‘landscape architects’.

entral Park has seen neglect, tragedy, destruction, and disasters, a series of mayors with conflicting policies, but today presents New Yorkers with a rural paradise in the middle of their stressful city. A walk, cycle ride or run in Central Park will restore the spirits of harassed citizens, the joys of a vast oasis or haven, to entertain, relax and inspire, the true purpose of any garden. Before Olmstead and Vaux took up the more formal title, talented gardeners, who had won fame for original design and winning ways, were recognised as artists by kings and popes, creating the masterpieces of Versailles and Rome.

The father of all ‘landscape architects’ is an Englishman, Lancelot (Capability Brown (1716 to 1783) who learnt his trade as humble gardener’s boy. He was the artist who changed the face of 18th century English landscape. He designed at least 170 parks, re-sculpting the lands around the country houses of dukes, earls, and barons, ending as Head Gardener at Hampton Court Palace. Most survive intact (though some have been converted into glorious golf courses)

To be a landscape architect needs a long training, and depth of knowledge from fine art to botany, from science to the environment. The two Johns, Murdoch and Wickham, studied together, founded their landscape architecture practice in 1983. Today’s affluent clients are still commissioning stately pleasure palaces to realise their dreams. In these two new Murdoch Wickham gardens water features can double as swimming pools, the differing gardens are ‘rooms’ to be enjoyed in the open air, each with a distinct character.

Icklingham Road (shown in the main picture above), a new build Surrey house, designed by neo-classical architect Julian Bicknell. A single acre of land has been transformed, says John Murdoch, to create ‘a cultural journey around the house.’ Each of several garden ‘rooms’ has its own character: English, Mediterranean, Chinese. 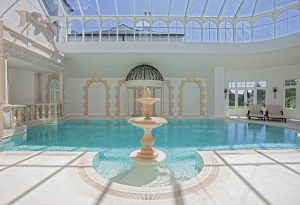 Crazies Hall (Crazies an ancient name for Daisies, formerly Henley Town Hall), is a listed building which reminds John Murdoch of an antebellum Mississippi mansion, something out of ‘Gone with the Wind.

The brief was to create an entire setting for the house and he designed a series of gardens, which he describes as ‘mostly restrained, as in library garden, west garden, sunken garden, but with one OTT Versace garden.’

Glamorous gardens such as these in fine neo-classical English mansions will inevitably be embellished with fountains, urns and statuary. After the Antique, stone masons par excellence, Norfolk based, specialising in bespoke items for palatial houses, hotels, lodges, palaces, were responsible for the urns in stone imported from France (Crazies Hall) and elaborate fountain embedded with shells.  www.murdochwickham.com  www.aftertheantique.com. Architects, builders, designers and sculptors have chosen marble, a natural stone for their prestige projects, since ancient times. There was a time when marble and stone seemed dated, but interior and product designers are returning to the beauty of natural materials. New developments in technology allows the exploration of marble and stone in completely different ways, high tech innovations such as laser and high pressure enable marble to be cut more precisely, thinner and with more curves.

Marble or stone tables are designed to withstand the most extreme climates without distorting or cracking. Sets of marble or stone tables have now replaced wood for outdoor terraces and patio gardens. Stone fire-pit sets are another of the latest trends – some even have an interchangeable centre section to incorporate an ice bucket for chilling that essential champagne. 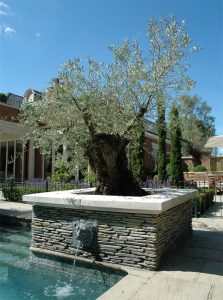 Most recently natural stone, rather than cast stone, is making a resurgence, with a charm that grows with age, developing its natural patina and attracting lichen which adds another characterful layer.

Stone or travertine are taking over from marble, looking softer and less formal than white marble, which needs a framework of evergreen to look its best. Travertine seems to be in the lead, always a favourite at Chelsea Flower Show: versatile, warm, equally smart in a traditional as in a contemporary environment.

As for fountains and water features, people are becoming more attracted to design inspired by the past than spare minimalism. Classical design will look good for generations, while ‘of the moment’ fashion soon loses its edge. When choosing a classical design it is important that the fountains should faithfully reproduce the correct proportions, followed by traditional architects who still revere the rules of ancient Greece and Rome. A company making bespoke fountains or urns will always visit the site, ensuring perfect balance and symmetry.

In our noisy age, a fountain can bring tranquillity, drowning out traffic and street sounds with its musical tinkling. ‘A classically inspired fountain is a perfect choice for a walled garden in a Georgian terrace house, says designer Clare Agnew, Chelsea award winner for a garden in collaboration with Savills, leading estate agents, which included a pavilion in neo-classical style.

When choosing statuary, it should work in close harmony with the overall style and dimensions of your home and garden. You could start by imagining the space as a blank wall in your living room, planning the statuary in that context, choosing the piece to enhance an arrangement of trees, shrubs and flowers.

Sound advice is to keep it simple. Even one piece will create a presence and a focal point. Each part of the garden may have a different mood or feeling, as in the rooms of a house, each space can be embellished by its own piece of sculpture, say a dramatic figure with a background of bold foliage, the quirky note of a stone pig in a vegetable patch, a rustic stone bench among the flowers and grasses of a planned ‘wilderness.’

Statuary, fountains, and urns bring a garden to life, transforming it to create an expression of individual imagination and taste. Together with a taste for the romance of classical statuary, the imaginary ‘architectural ruin’, and a use of sculptural boulders of natural rock and stone, comes the advance of new technology.

As a golden rule for garden statuary, fountains and urns, every piece should belong to a specific site in a particular garden. Great British sculptor Barbara Hepworth once said: sculpture grows in the open light, its aspect is always changing. This perception applies as much to embellishing a tiny garden with an urn, as an avenue of sculpture in the park of a stately palace.