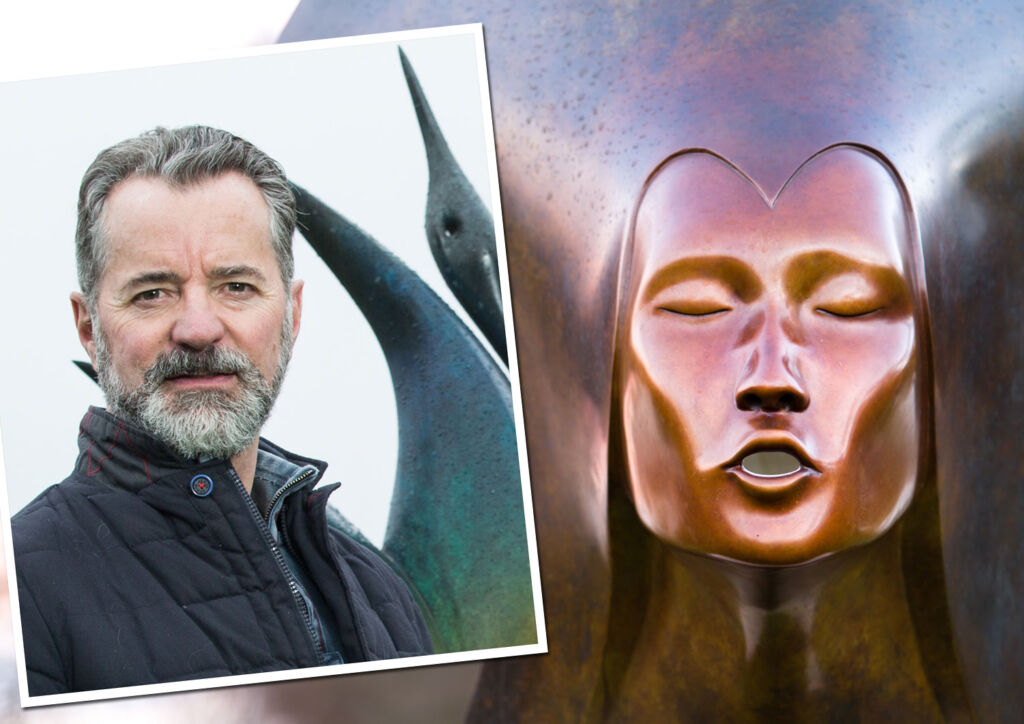 His striking pieces are favoured by Royalty and rock stars and displayed in high-profile public spaces around the world – but celebrated contemporary sculptor Simon Gudgeon only discovered his extraordinary talent at the age of 40. He tells us about the road from solicitor to a sculptor, his passion for his work, and why he never, ever takes commissions.

When I ask Simon Gudgeon, who his buyers are, he tells me ‘people with lots of money and excellent taste.’ He’s speaking with his trademark wry humour of course – but actually, the description is apt.

Three generations of the Royal family own his pieces, as does rock royalty Nick Mason, founder member of Pink Floyd. 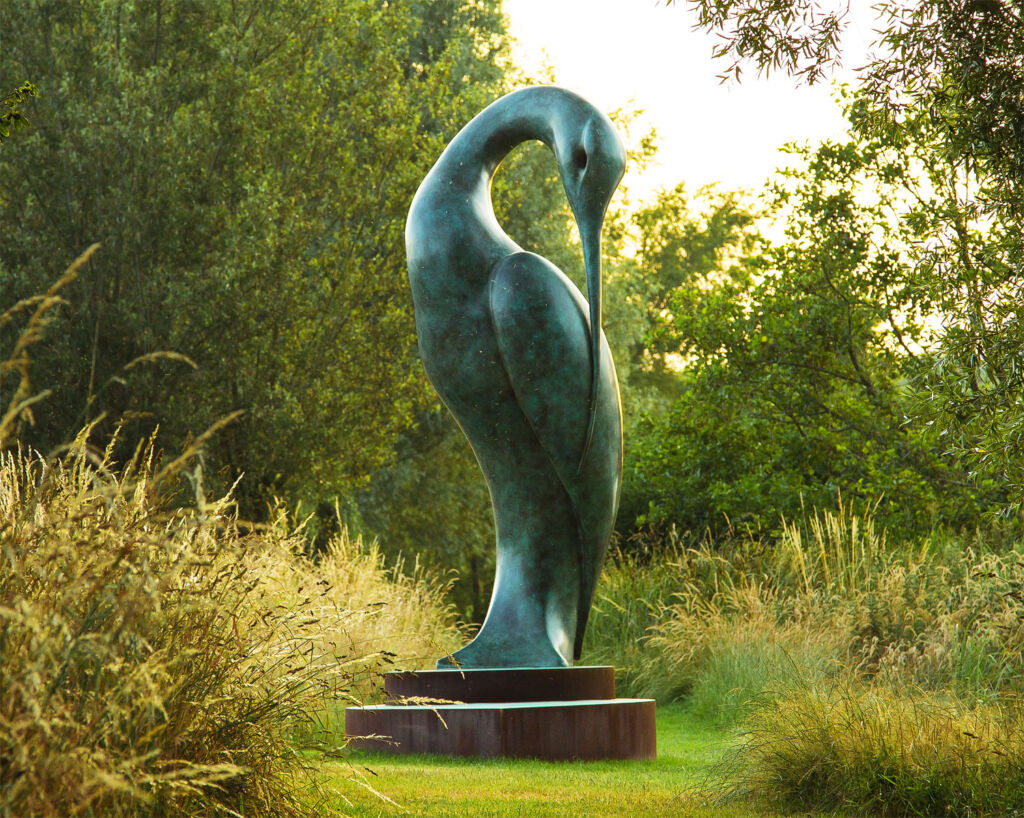 His 3m-tall bronze ‘Isis’ was the first sculpture to be installed in London’s Hyde Park in 50 years, while another casting is at America’s National Museum of Wildlife Art in Wyoming.

Two of his sculptures feature outside the Cirque du Soleil International Headquarters in Montreal, Canada, and three are installed at London’s most exclusive and luxurious address – One Hyde Park.

Growing up on a farm in rural Yorkshire, Simon had no great ambitions to be an artist. Rather than art school, he went to law school ‘for want of anything better to do’, and after that pursued a series of disparate careers, from solicitor to photographer, to a gardener, to an insurance salesman.

It was only in his mid-30s, following the collapse of his landscape gardening business that he finally found his calling.

He says: “When I walked away from the business, I lost the house, the car – the whole lot. I thought ‘that’s it for me then – what the hell do I do now?’

“Around that time, my mother gave me a box of paints, and I started painting with watercolours, then pencil work. It was the first time I’d ever done something I really wanted to do. I didn’t think I’d ever make much money, but I knew I wanted to be an artist.”

For the next four years, he became a professional house-sitter – which allowed him to paint “all day every day.”

He went on to carve out a respectable living as a painter, but it was as nothing to his achievements as a sculptor. Here too serendipity played its part.

He was tidying up his studio when he came across a piece of artists clay bought on a whim a few months earlier and stashed in a cupboard. He explains: “I thought, ‘let’s have a little play with this’, so I started sculpting and absolutely fell in love with it.” 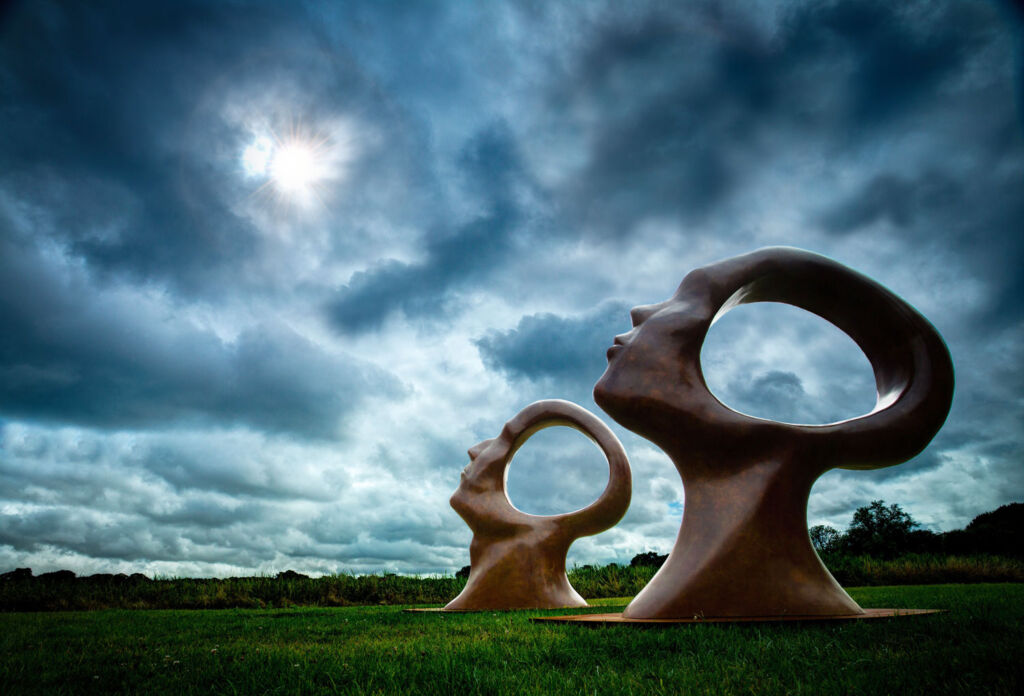 At the age of 40, he had finally discovered what he wanted to do with the rest of his life – and he has never looked back. From his first piece, a life-size woodcock cast in bronze, through to the monumental skyward-staring heads of ‘Search for Enlightenment,’ his creative appetite has continually led him to explore new styles, from figurative pieces to kinetic sculpture, working predominantly in bronze, but also marble, glass and steel.

He has moved from the representational to the semi-abstract and abstract, often favouring the “shape, form and movement” of bird forms, and more latterly focussing on the human form for its “ability to convey emotions,” he adds. 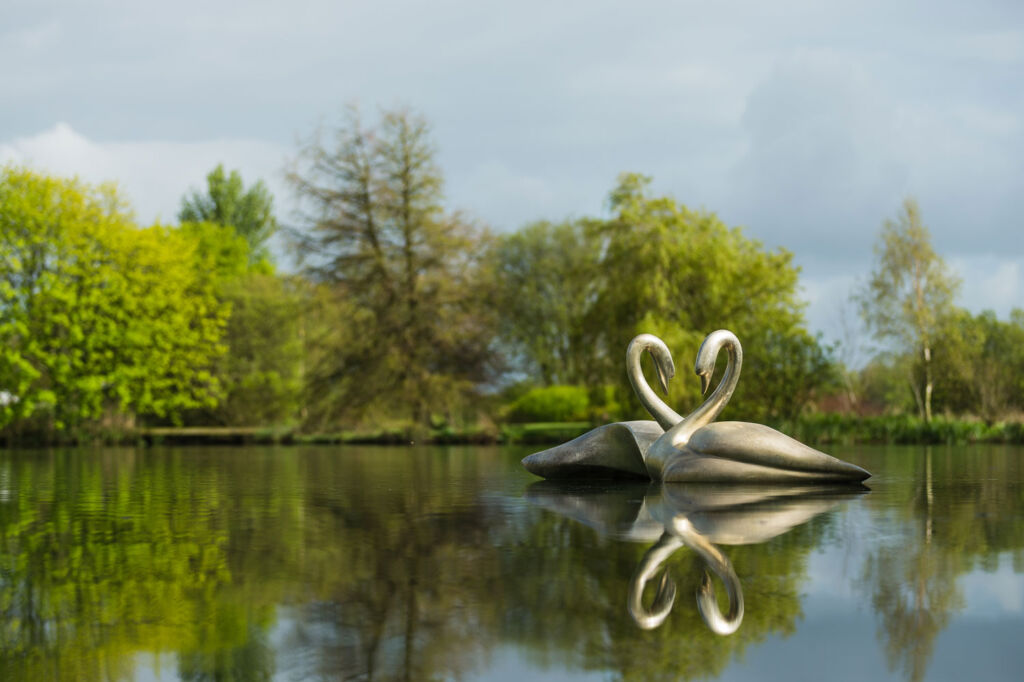 Throughout he has held true to his belief that sculpture must, “above all, be a thing of beauty; it must uplift the spirit and enhance its surroundings.”

During this time, alongside his wife Monique, he has transformed their Dorset home into a 26-acre sculpture park, planting thousands of trees and shrubs and installing more than 30 of his sculptures. Making Sculpture by the Lakes “a work of art in its own right” has “driven his creativity” for the past ten years, he adds.

“I love making things,” he says animatedly. “I’m a sculptor – yes, but essentially I’m a maker. I made the gates and fences in the garden, the coffee trailer, the pavilion, the seats.

I love the process of working out how to make something, and when your mind is completely absorbed in the fabrication. As well as casting, I find I increasingly like making things from scratch. My latest piece, Liberté, is a human figure welded out of steel carpet nails. 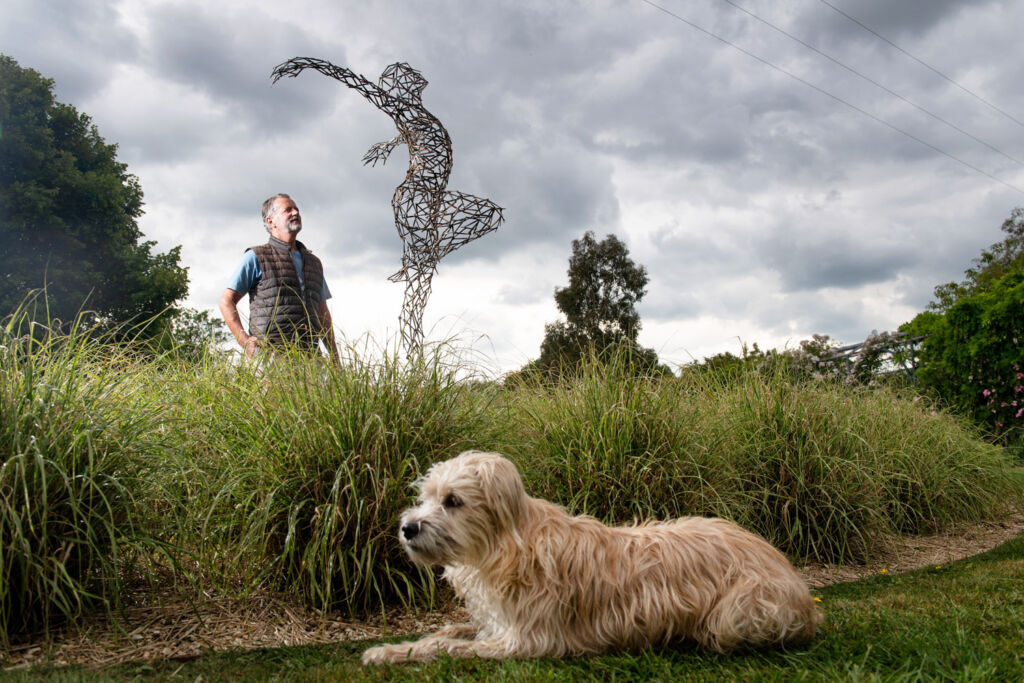 I realise now that the most important part for me is the making – that’s what I really enjoy and when I’m at my happiest.”

A master of his craft, Simon can command up to £300,000 for his pieces – but this is by no means what drives him. He adds: “It’s all about facilitating the next piece of art – if people don’t buy my work, I can’t create anything new – that for me is the greatest thing.”

Given this impetus, it is not surprising then that he rejects outright the idea of creating artworks on commission.

“Commissioned art is created for money – it’s prostitution,” he states bluntly. “Creating a piece of art actually doesn’t take all that long – but what takes time is the thought process, the inspiration; an idea can take years to come to fruition. When you commission a piece, you don’t have that time – it’s never going to be your best work.” 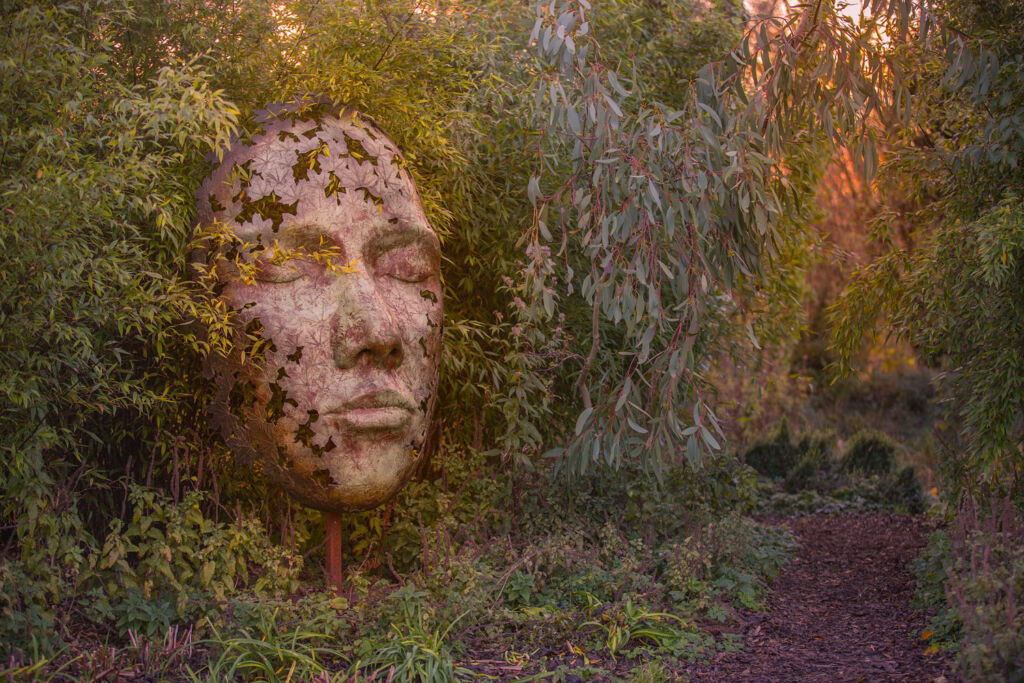 Instead, he urges buyers to follow an artist until they find “something they love”, adding: “As an artist if you’re creating something you actually want to create, it’s always going to be far superior.”

Finding ‘something you love’ is something of a guiding principle in Simon’s life. He adds: “I went from walking away from a business with just a suitcase of clothes in my 30s thinking ‘I’m never going to make anything of my life’, to starting sculpting at 40; it goes to show that people can chop and change – they should remain flexible. 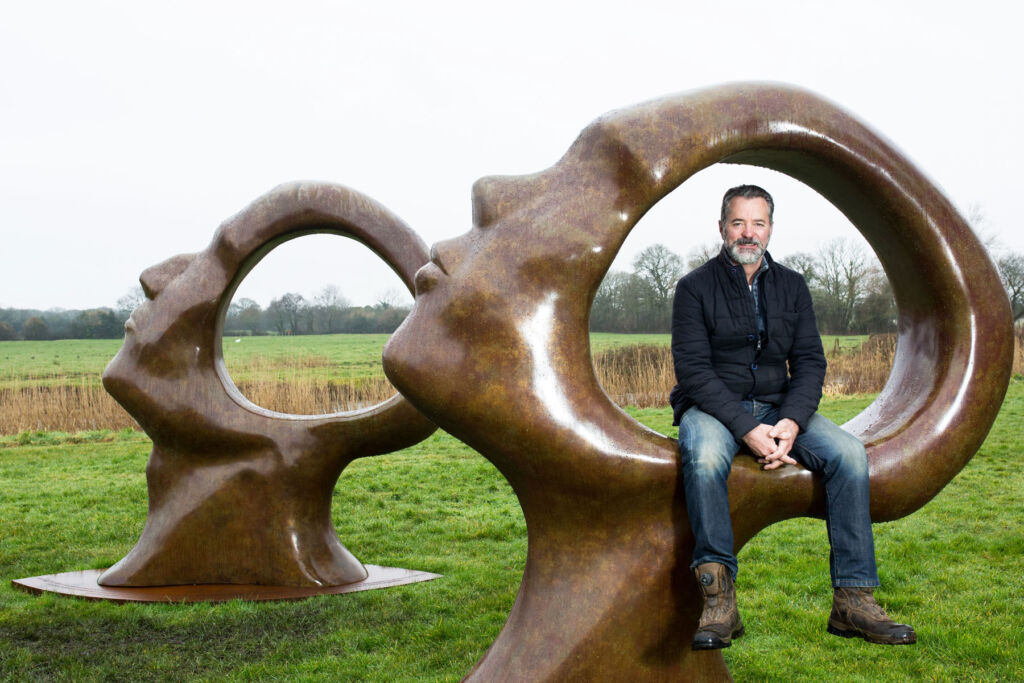 For more information on Simon Gudgeon and to see more of his works, visit www.simongudgeon.com or contact +44 7779 712298 to arrange a viewing.