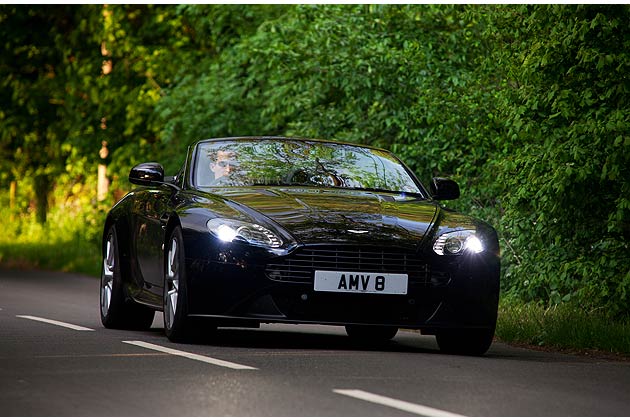 The last time I drove a V8 was a Ferrari 348 TB, a machine developed in the early 1990s by the Prancing Horse in Maranello. Technology and creative flair have since moved on significantly and so has the competition. It was therefore time to up both the power and comfort stakes, and what better place to start than with the 2012 model year Aston Martin V8 Vantage Roadster.

The Vantage, which prides itself on a philosophy of ‘effortless and exploitable performance’ is the smallest model in Aston Martin’s current line-up (excluding of course the Cygnet), and was first shown to the world as a coupé at the Geneva Motor Show in 2005. A year later at the LA Auto Show in the USA, the 4.3-litre 380 bhp convertible was introduced carrying the ‘Roadster’ moniker (as opposed to ‘Volante’), and over time, other variants have since sprouted from the Vantage platform including the race car used in the GT4 Challenge of Great Britain series and the more potent V12 family. The latest incarnation of the hand-built Vantage Roadster which has received a host of styling and performance upgrades relative to its predecessor. These include wider wheels and tyres (now 19-inch) in addition to large two-piece front brake discs and six-piston calipers. Nevertheless, what has remained the same with the drop-top is namely the bonded aluminium and magnesium alloy composite structure as well as the aggressive stance and beautifully-crafted sweeping profile which make this particular car a true object of desire and elegance.

So what is it like to drive? Today’s Vantage Roadster is powered by a naturally-aspirated lightweight and compact 420 hp 4.7-litre V8 engine which is assembled by hand at Aston Martin’s purpose-built facility in Cologne, Germany. Mounted as far down and back in the chassis as possible for a low centre of gravity, this magnificent powerhouse is brought to life by inserting a £1,000 crystal-capped cartridge-like keyfob into the centre of the front console. As you hit the throttle and make your way up the six-speed manual gearbox, the performance can only be described as mind-blowingly fast, and 62 mph is reached in the blink on eye which translates mathematically into just under five seconds. It’s not just the acceleration that brings the senses alive but the soundtrack emanating from the twin exhausts that goes with it. It is truly sublime and you can’t help just wanting to keep gunning for more. Retract the fabric roof and the raw growl can be enjoyed in all its glory. Handling whilst either cruising on the main roads or hugging the sweeping bends of country lanes is good and the suspension is firm, but not intrusive. 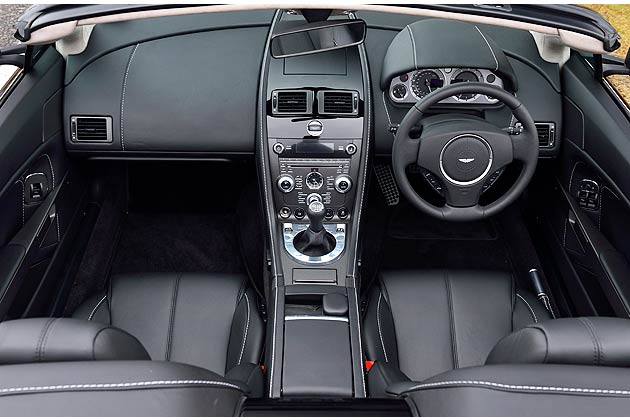 The cabin is awash with sumptuous leather accentuated by delicate white stitching, and as you sink into the low-slung driving seat, you are invited to admire the exquisitely-sculpted bonnet which is a true work of art. The attention to detail within the interior is remarkable with several hints of chrome which extend right down to the Lamy writing instrument that can be released from the base of the front fascia at the push of a finger. The handbrake has been relocated to the right of the driver giving way to an elevated armrest and a centre console which has a ceramic-like finish. The comprehensive 160W in-car entertainment package boasts a 6-CD autochanger and integrated Apple iPod connector, and the satellite navigation display, which rises to the left of the instrument binnacle, is not the most sophisticated on the market today, but is nevertheless user-friendly. The small screen equally doubles up as the reversing camera when this particular option is specified. Other extras on the car we tested apart from the satellite navigation, were namely heated seats, rear clear lamps, front parking sensors and cruise control which bumps up the on the road price of the V8 Vantage Roadster to just shy of £100,000. This puts the Aston Martin in the same bracket as the 4.2-litre Audi R8 Spyder or Porsche 911 Carrera Cabriolet, but this is after all a car where the premium for a convertible is definitely worth paying.

To arrange a test drive or to find out more about the Aston Martin range, visit www.astonmartin.com.