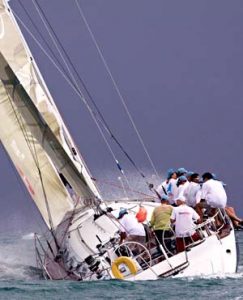 The regatta has just been voted ‘Best Asian Regatta 2011’ at the annual Asia Boating Awards in Hong Kong, only the second of Thailands six regattas to win the prestigious award.

Six Senses Phuket Raceweek 1011 will be a heady mix of competitive racing and legendary parties in ultra glamorous settings provided by one of Thailand leading luxury resorts. Evason Phuket & Bon Island, part of the Six Senses Resorts & Spas portfolio of properties, enjoys an idyllic location overlooking the Andaman Sea with 64 acres of beautifully landscaped grounds and accommodation to match.

The resort’s Into The Beach restaurant, now with acclaimed chef Thomas Jakobi at the helm, is one of the sparkling aprés race venues. The fine dining restaurant recently gained 10 out of 10 for food in a review by Thailand Tatler, the only restaurant in Phuket to have earned the accolade.

“Six Senses is delighted to continue its close relationship with Phuket Raceweek and we are pleased it has gained international recognition as the region’s most entertaining multihull sailing event. This year will be very special with Dee Caffari as our ambassador”, said John Philipson , Six Senses Resorts & Spas Managing Director, Thailand.

Among the leading entries confirmed for the event so far are five first-timers, led by David Ross’s brand new Ker 40 pure racing yacht, KukukKERchu, which will debut at Phuket Raceweek.

The well-known ‘yachting personality’, Dee Caffari will also be present. In 2006 Dee became the first woman to sail solo, non-stop, around the world against the prevailing winds and currents, and was awarded an MBE in recognition of her achievement.

Dee Caffari, an ambassador for Six Senses, competed in the 2008/9 Vendée Globe – a gruelling round-the-world race – crossing the finish line in 6th place out of an original fleet of 30 competitors. In June of the same year, Dee and an all-female crew went on to smash the mono-hull speed record around Britain and Ireland. Dee will race the 38ft Andaman Cabriolet catamaran, Niña, a yacht that won at Phuket Raceweek 2009.

About Six Senses Phuket Raceweek
Six Senses Phuket Raceweek presents four days of international-standard yacht racing for a wide range of yachts – from the highly competitive top racers all the way to live aboard cruisers and charter boats. Based at the Evason Phuket & Bon Island (part of the Six Senses group), the social programme is 5-star, offering excellent catering and first-class entertainment – and very special low-season rates for luxury accommodation. Raceweek is Phuket’s own, locally organised and managed, international-standard regatta, Following the success of Phuket’s first International Boat Show launched by Phuket-based Image Asia Events, the company brings yet another ‘first’ to Phuket.