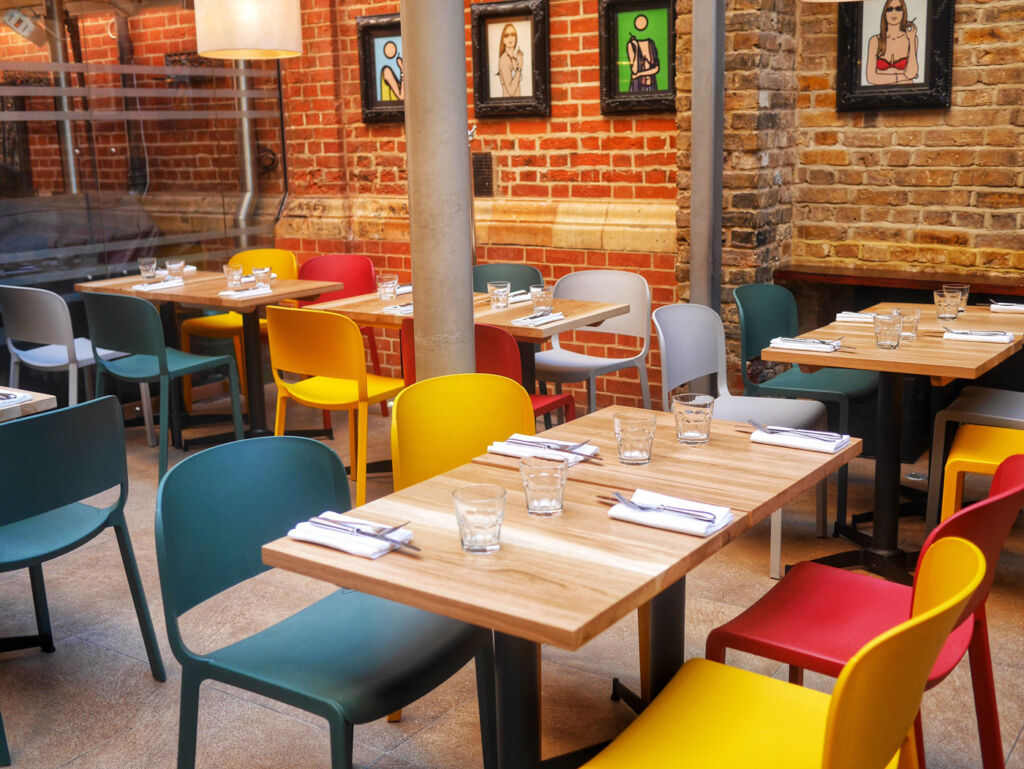 Simon Wittenberg heads to the relaxed and informal Galvin HOP near Spitalfields Market in London for a spot of lunch.

Situated on Spital Square next door to the Michelin-starred Galvin La Chapelle restaurant, which we had the pleasure of dining at last summer, Galvin HOP was unveiled as a gastropub back in 2016. It replaced Galvin’s Cafe à Vin, and was relaunched last year as a café and bar.

This 32-cover eatery has a relatively casual and informal feel to it, and the décor features multi-coloured plastic chairs, light wooden tables, and an open kitchen where you can admire the team of chefs at work. There’s an array of different menus on offer to visitors, but we were there to try out the Sunday roast.

It is somewhat of a tradition in the UK, and Galvin HOP claims on its website that it offers the best roast in East London. However, we wanted to find out for ourselves if this statement literally had substance.

To kick things off before embarking on a starter, there’s a few bites such as Padron peppers and mushroom croquettes with saffron aioli. In terms of the first course, five different dishes are listed, ranging in price from £7 to around £11. I tried the delicious sea bream ceviche which was decorated with thin strips of chilli and avocado mousse (£9.50). It was magnificent, and the tangy nature of the lime gave it that nice kick to complement the sumptuously soft fish.

My other half opted for the flavoursome new season French asparagus with a helping of pecorino cheese (£10.50), which was just as good, and a clean plate at the end was a clear signal that she was a satisfied customer. Other delights that you can indulge in at this stage of the meal include endive salad with Papillon Roquefort and walnuts, and Spring minestrone with pesto and wild garlic. 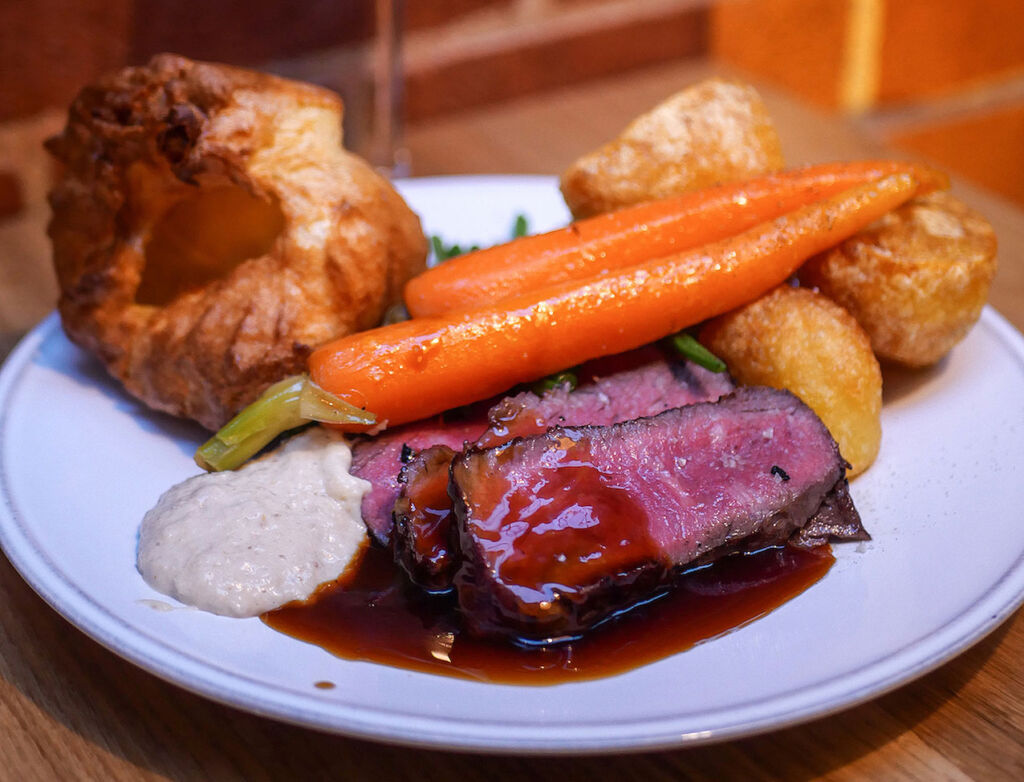 My wife was the one that put Galvin’s highly-praised and hearty Sunday roast to the test. Arriving a short time after we had finished our starters, the three slices of succulent beef were presented with some nicely browned roast potatoes which had a crusty outer layer, a carrot, parsnip and green beans, plus some thick gravy to cover the dish. The serving was generous and good value for the price tag of £18, and was it as good as they said it would be? Well, the answer was an unhesitant yes, and it certainly lived up to the high expectations.

For non-meat eaters, there’s a couple of options for the mains, which are namely the miso glazed aubergine with pak choi and courgette (£14), and the baked sea trout with peas and pied de mouton (£18.50). I tried the beautifully prepared and flavoursome pink-coloured fish, and although it already came on a bed of cabbage and peas, I chose to add a couple of sides, namely some fries (£4) and a portion of al dente purple sprouting broccoli (£4.50). 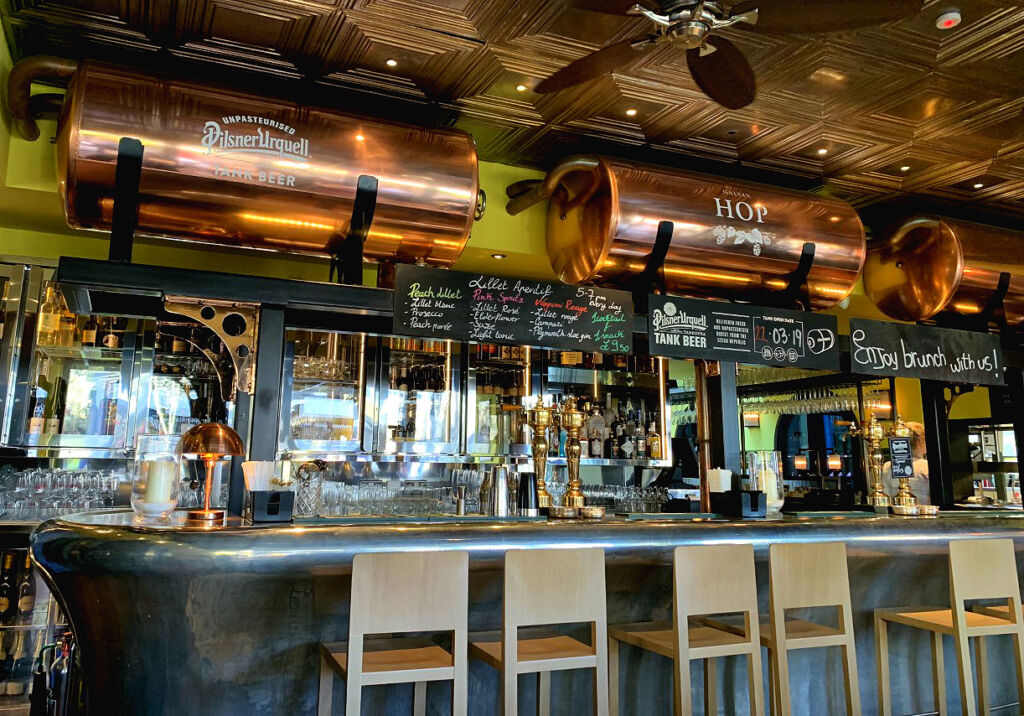 In terms of the drinks menu, there’s alcoholic beverages and a range of soft varieties on offer, in addition to a small wine list, and the Pilsner Urquell beer that comes straight from the Czech Republic. In fact, two large copper beer tanks hang over the bar with a chalkboard highlighting the opened date to guests – it’s that fresh.

We opted to sample all four of the virgin cocktails listed (they range in price from £5 to £6.50), and although the elderflower and fresh mint-based Elixir was refreshing, the sweet Piña Colada was probably the best that I have ever tried. Despite being a little ice-heavy, it was thick, creamy and perfectly made.

Come the dessert, and we had just enough space left after the filling and sizeable opening courses. I had the very thick buttermilk pancakes with berries and Chantilly cream (from the brunch section – £7), whilst my other half was treated to a dairy-free rhubarb soufflé. Other options that I could have been tempted by were namely the strawberry whipped cheesecake and salted caramel and Valrhona chocolate mousse.

At Galvin HOP, it is certainly not worth skipping the opportunity to have the Sunday roast. This venue offers the perfect formula to relax at the weekend in the company of good food and service, but in a relatively informal dining environment. We continue to be great fans of what the brothers have achieved, and we will certainly be returning next time that we find ourselves in the City.

Galvin HOP – Where and How?

See pictures of what we had at Galvin HOP on our Instagram page.