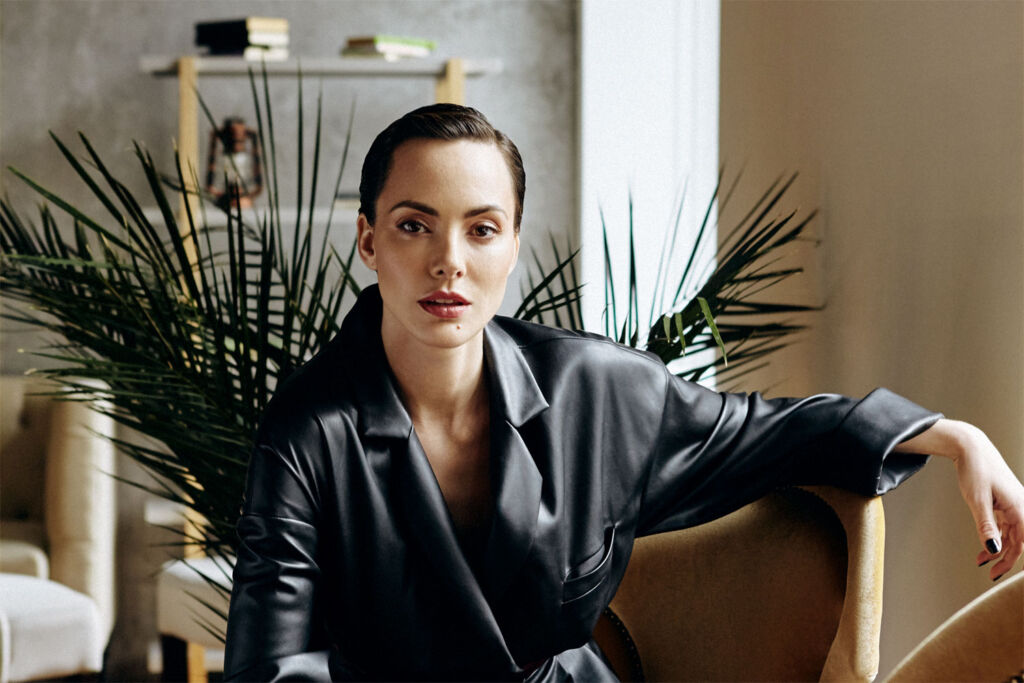 Sofya Skya has come a long way from a Russian Ballet dancer to a Hollywood actress and acting coach. She launched RAS Acting School based on the immersive creative space Real Art Studio in Moscow last year. We talked to Sofya about her cinema experience and her inspirations.

Luxurious Magazine: You have an amazing career starring in Hollywood, European and Russian movies. What is your most interesting or memorable role?
Sofya Skya: The first role is always the most memorable: exciting emotions, lots of people watching you, and not only through the camera. You understand that right now your further career largely depends on how you reveal the character’s nature on the screen. You will be judged by the audience and professionals of the film industry. And if you playing the first and the main role – the responsibility is doubled.

I can say that “Ligeia”, based on the original story of Edgar Allan Poe, remains in my memory, and I cherish this experience very much.

My scene partner – Wes Bentley, the gorgeous scenery of Vorontsov Palace in the Crimea, the fascinating and mysterious atmosphere in which the film was created, holds a very warm place in my memories.

LM: You enrolled and trained at top acting studios of Joan Baron, Lisa Milillo, Larry Moss. Why did you decide to switch your experience and launch your acting sсhool?
Sofya: I’ve got decent training with industry-recognized teachers in Hollywood, and I gained a wide acting experience, filming in Hollywood, Europe, and Russia. I summed up all my knowledge and transformed it into a unique method, adapted to the Russian mentality.

I have developed various training courses, one of the latest: “Casting on callback” and “Work and life on the technique of Sanford Meisner with Sofya Skya”. Every person who is interested in developing their skills can attend my courses at RAS Acting School. I want to emphasise that the basis of my training is fundamentally different from the classical system of teaching acting in Russia.

LM: You were born in Saint Petersburg. For those planning to visit, what are some of the things they shouldn’t miss?
Sofya: Saint Petersburg is one of my favourite cities in the world. Here I’ve experienced lots of emotions, here was born dreams, that finally came true. I’d advise a person, visiting this paradise on the Neva River for the first time, to start his journey with a walk through the city centre.

Walk along the Palace Embankment, which overlooks the Neva, and find yourself on the self-titled square, where you can admire the widespread Winter Palace and majestic Alexander Column, topped by the figure of an angel with a cross in his hands, which protects the Land. From the square, you can easily go to Nevsky Prospekt – the main street of St. Petersburg, and soon you will see the magnificent Kazan Cathedral.

From the Prospect you can turn to the Griboedov Canal and go to the Church of the Savior on Blood. You can find other equally exciting routes that will reveal unique places, such as St. Isaac’s Cathedral; Senate square, with its famous the Bronze horseman; Alexander and Mikhailovsky gardens; the Field of Mars; the Peter and Paul fortress; the Admiralty; the Mariinsky Theater; Alexander Nevsky Lavra; Smolny Convent – it seems to me that I can go on and on.

Peterhof with its magnificent fountains and the Great Catherine Palace – are must-visit places. Make sure to come and visit the historical stage of the Mariinsky theatre to experience the power and beauty of Russian ballet.

I advise guests of the northern capital to take a boat trip to see the power of the Neva River, through its bridges and canals. Everyone should attend the night bridges raising – this is the only way to truly see the “soul” of St. Petersburg. The same thought is hidden in one of the most romantic episodes in the film Assassins Run (White Swan), where I and Christian Slater, who played the role of my husband, take a boat ride through the city at night. 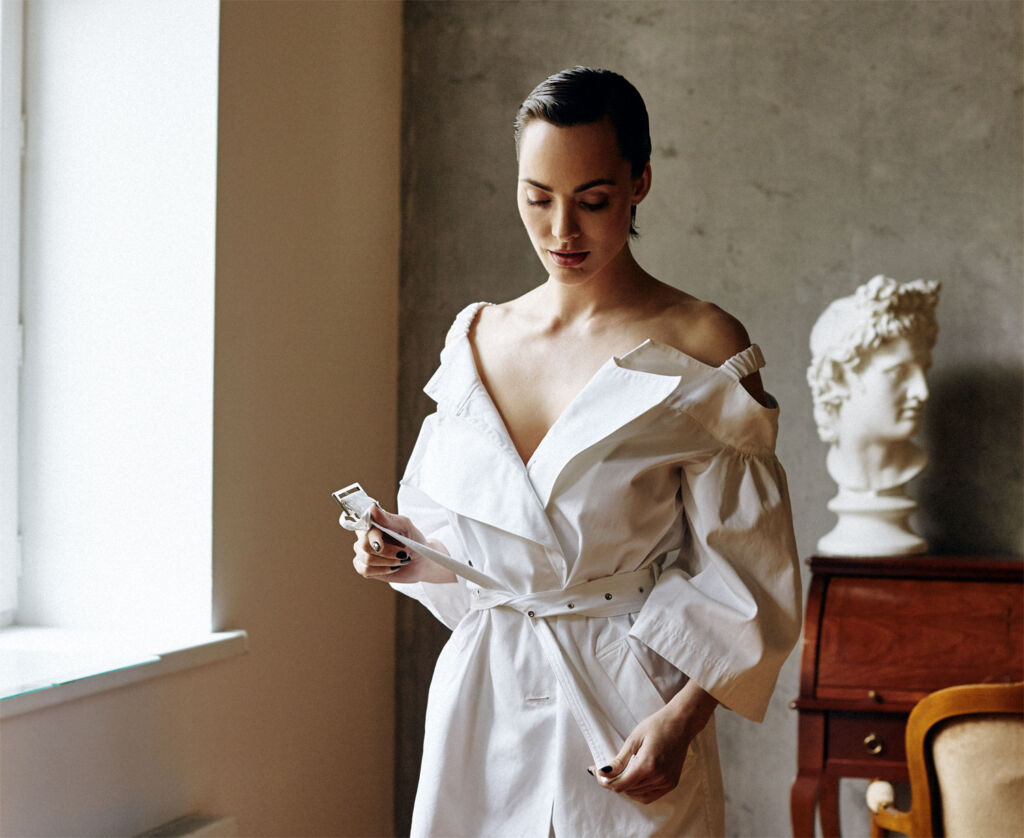 LM: If you were offered the role of a cult character from Britain history or a literary character from the works of English writers, who would you choose?
Sofya: That’s an interesting question. If I had been offered the role of the first British astronaut, Helen Charman, I would have accepted. If I could transform into the modernist writer of the first half of the twentieth century and literary critic Virginia Woolf, I would have a unique experience.

I could perform the role of Jane Eyre, the heroine of a Charlotte Bronte novel or Florence Nightingale, known as “The Lady With the Lamp”. I would like to perform the character of Queen Elizabeth I, although I would have to dye my hair and change its shape, it would be worth it.

LM: You are an author of the video project “Стихийный brunch”, in which you read Russian poetry. How did you get the idea to launch this project? What are your future plans?
Sofya: I love poetry very much and read poems by memory. I can read American and British poets, such as Robert Frost, Thomas Moore, or George Byron, but most of all I’m inspired by the works of Russian poets from the Silver age: Anna Akhmatova, Alexander Blok, Valery Bryusov, and my favourite “genius of the words” Osip Mandelstam. Not every modern person has enough time to open a book and enjoy some poetry.

For this reason, I launched the project “Stihiinyi Brunch” (it sounds like Spontaneous Poetry for Brunch, as a food for the soul) on my YouTube channel, where I read poems, accompanied by a musical line and a visual image for the comfortable and complete perception of the poem by the viewer.

LM: If you had more time, what would you do more of?
Sofya: Before the COVID-19 pandemic, I would’ve said that I would like to spend more time with my loved ones, and of course with my son, I used to work a lot on my projects as an actress and acting coach, often went on business trips. During the lockdown, I devoted lots of time to my family, hobbies, and myself. At the same time, I didn’t stop working. I continued improving the program of my acting courses and started developing new ones for RAS Acting School – now I run it as an online course.

In my special project #ActorsTalk I’m going live on Instagram with professionals from the global film industry. My team and I launched LIVE sessions in order to discuss with moviemakers the changes in the film business, to share personal experiences, news, and insights about new projects.

Today, I want to work more, communicate with my colleagues on the set, and engage with my students in Ras Acting School. Probably, many people want the same now – personal contact. We were out of work and felt all benefits of free time, now we want to back to normal life. 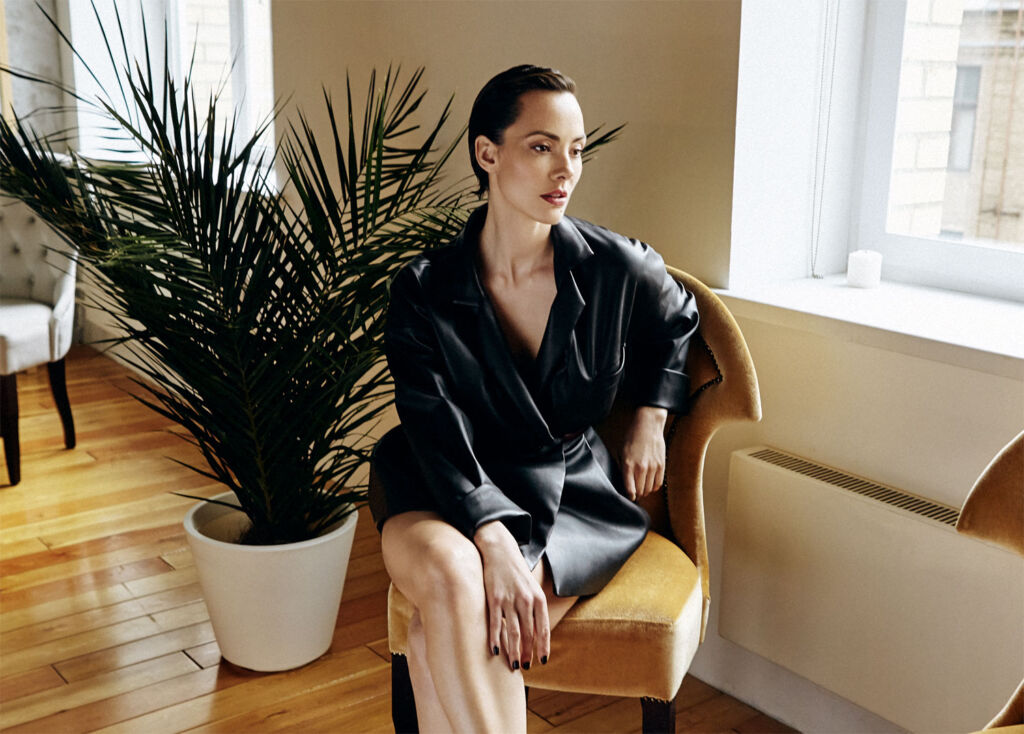 LM: What advice would you give to an actor just getting started or seeking to improve their professional skills?
Sofya: Don’t be afraid to experiment and take risks in the profession. Even if you are in doubt, but you get a chance to self-realize yourself – use it.

Attend masterclasses and courses on acting, even if you already have worthy roles. Train your skills at home with like-minded people, record yourself on camera and analyze, read literature, including professional one. Believe in yourself and everything will work out! To be a professional, acting like professional means to be ready for your part, value your time and other crew members.

The interview with Sofya Skya was conducted on behalf of Luxurious Magazine by FprBuro.