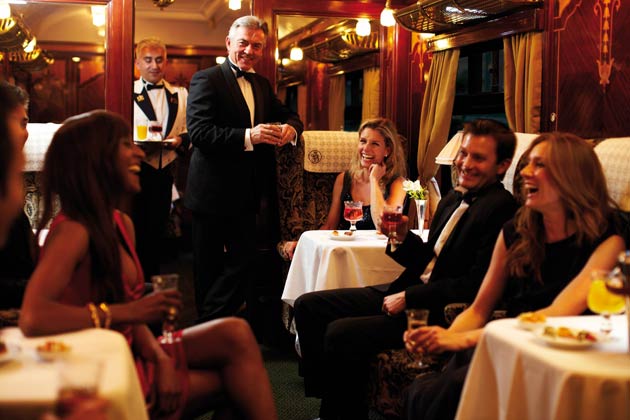 I’ve always wanted to go aboard the British Pullman, but instead have only been teased by stories of those who have been on it.

The closest I’ve got near one is to watch one dash past along the tracks and of course I’ve seen it in many times flicking through glossy brochures. So the chance to step back into the golden age of travel to experience everything that was fabulous about the roaring 1920s and 1930s aboard the train – the sister train to the Venice Simplon-Orient-Express – was truly a magical experience. 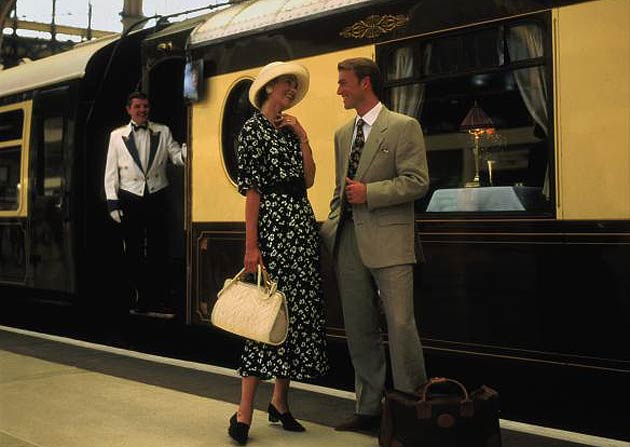 Our journey began on a platform at London Victoria. We were going to have to solve a murder mystery on our themed five-hour lunch trip as we travelled on a circular tour of the British countryside in Kent. No sooner had we jumped on, a steward was quick to offer us a glass of champagne so that we could immediately relax and assume Miss Marple’s character ready to deduce whodunit.

Everything about the train is what you would expect: the carriages are beautiful, the marquetry is stunning, the plush soft and well upholstered plush armchairs are extremely comfortable and the linen-clothes tables are softly lit by silk lamps. The glamour and elegance is equally matched by the passengers on board who are encouraged to wear smart clothes for the occasion. 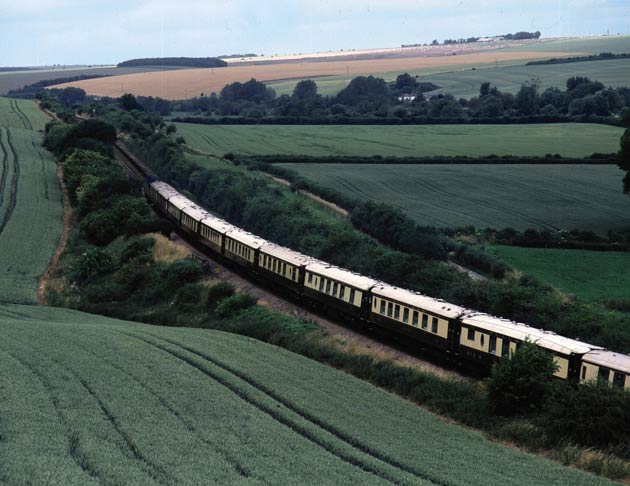 We were served a five-course lunch at the table by smart stewards who couldn’t do enough to make you feel you were on a special early twentieth century journey but yet still offering a relaxed banter belonging to the 21st century. With two courses in and having seen the same number of suspects – Tamara Crispin-Pettiface, the mistress and Satan, the son of the 6th Lord Deville had been murdered. He came to a bitter end with his face in a bowl of semolina. Which one of the seven people wanted to lay their hands on his fortune? It was for the passengers to solve the mystery as they enjoyed the lunch and the journey around the garden of England.

With a Celeriac Tian with Beetroot Cured Salmon and Garden Pea Soup with Minted Crème Fraiche washed down with a glass of Klein Kloof Sauvignon Blanc from Western Cape, South Africa, we tucked into Roast Gressingham Duck Breast with Pancetta, Shallot and Tarragon Café au Lait. It was while having cheese and homemade chutney that the rest of the characters paid us a visit. 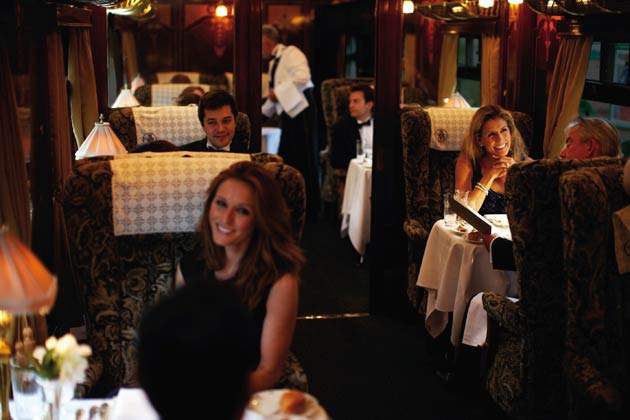 The food was delicious, extremely well prepared and served from large trays so you could decide the portion size you wanted. That it was prepared on the moving train by chefs was difficult to believe.

Unfortunately pre-occupied by food, my guest and I were none the wiser of who had murdered Lord Deville. We suspected everyone. And when pudding arrived in the form of Roasted Plum and Chocolate Mousse with Cinnamon and Oat Crumble, we had no hope. Upon finding out, we decided to entertain ourselves by taking a trip along the other carriages of the Pullman which we were actively encouraged to do. Each one of them is as beautifully decorated as the next, including the rest rooms. This is the way to travel. 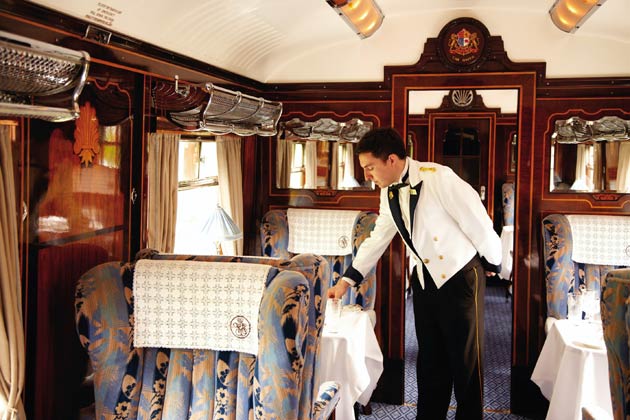 The British Pullman is advertised as a “more gracious, elegant” form of travel and promises a “sequence of unforgettable moments”. Having experienced it first hand, we can comfortably say this really is one of the best rail journeys you can enjoy in the UK. It’s a great way to lose yourself in pure indulgence on a journey which unfortunately is over too soon.

The British Pullman offers an extensive programme of luxury day excursions to Britain’s historic towns and stately homes as well as fine dining experiences. Aboard meticulously restored cream and umber 1920’s and 1930’s carriages, passengers enjoy fine foods, wine and champagne as Britain’s countryside unfolds at the window. Prices start from £205 per person. For further information call 0845 077 22 22 or visit www.orient-express.com/uktrains.

The murder mystery lunch starts from £310 per person with the next journeys leaving on 25th October 2013 and 15th November 2013.