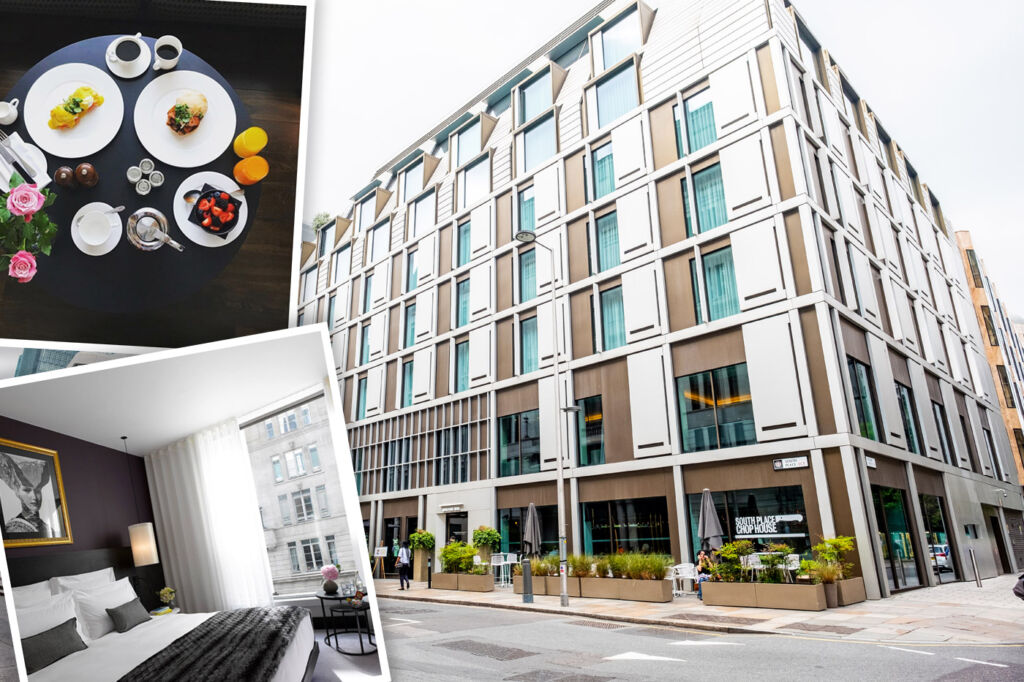 Situated within walking distance of Moorgate station, the luxurious South Place Hotel describes itself as the City of London’s first art hotel with soul, and is also the first hotel to be operated by the D&D London group. For a property which only has 80 bedrooms, it offers a multitude of venues to eat and drink.

For a pre or post-dinner beverage, there’s the Secret Garden which has been transformed into the Rosé Riviera until this September, thanks to a partnership with Minuty, the producer of Côtes de Provence wine. There’s equally Le Chiffre (a city speakeasy), the 3 Bar, and finally, the Angler Terrace, which is supposedly one of the most in-demand rooftop spots in the Capital.

We stopped off at the latter for an aperitif, and the floral Angler Terrace is actually an extension of South Place Hotel’s Michelin-starred seafood restaurant which we haven’t yet eaten at. They have partnered with the Cambridge Gin Distillery and offer a selection of refreshing thirst-quenchers and snacks which you can enjoy whilst being shielded from the elements. The view from the seventh-floor roof terrace stretches over the adjacent buildings, so is not the most scenic of vistas, but is pleasant nonetheless and there is background music to create a chilled vibe.

The menu is reasonably priced and there’s a good choice of cocktails, wines and soft drinks. We had a couple of ice-cold classic G&Ts (£12) in nice decorative Cambridge Distillery glasses, which were made using a dash of the aforementioned gin and Fever Tree tonic. They were accompanied by some addictive green Nocellara del Belice olives from south-western Sicily (£5), and moreish Pistou nuts made up of broad beans, peanuts, cashews and basil pesto (£4.50).

After enjoying some pre-dinner tipples, we ventured back to the ground floor to South Place Hotel’s other eatery, which goes by the name of the Chop House. It’s a hive of activity and a haven for carnivores and fish lovers, and all the cooking is overseen by Head Chef, Guy Betteridge. The restaurant seats around 85 visitors at a time on a long wooden table, and on velvet or leather-covered chairs. On the night that we went, it wasn’t too busy which gave a more relaxed and less frantic atmosphere. Furthermore, behind the bar, the kitchen is also open where you can see the chefs preparing all the gastronomic feasts.

The à la carte (available in the evening from 6pm) is plentiful in its content and there are numerous options to choose from for each course. Starting with the “Smaller Plates”, I tried the seared yellowfin tuna (£12), a narrow plate housing five square pieces of fish which were garnished with wisps of avocado mousse, sundried cherry tomato and spring onion shavings.

It was a real melt-in-the-mouth dish, and one where I could have had far more than what was presented on the plate, it was that good! My other half-tucked into the ample and nicely concocted East End salad (£9 as a starter), which was made with a bed of harissa hummus, and large grain couscous from Israel mixed with some shredded carrot, pomegranate, pieces of cucumber and fresh mint.