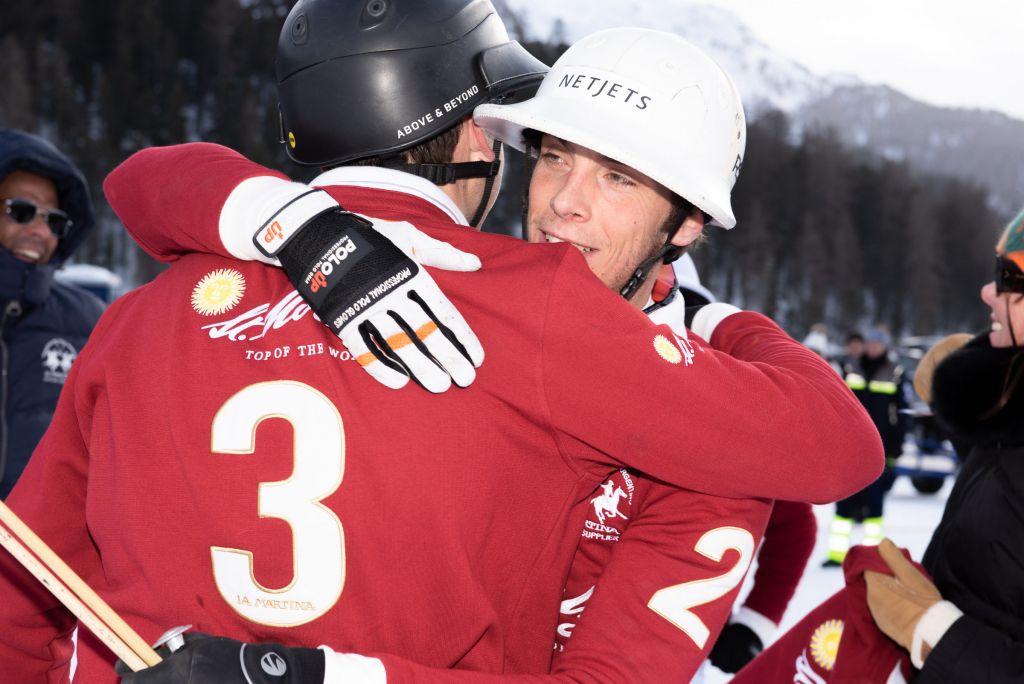 The by-line to sum up this year’s event at St. Moritz is ‘Top of the World’ and sitting in the packed grandstands for the Finals today it truly felt like there was no place better to be anywhere on the globe. 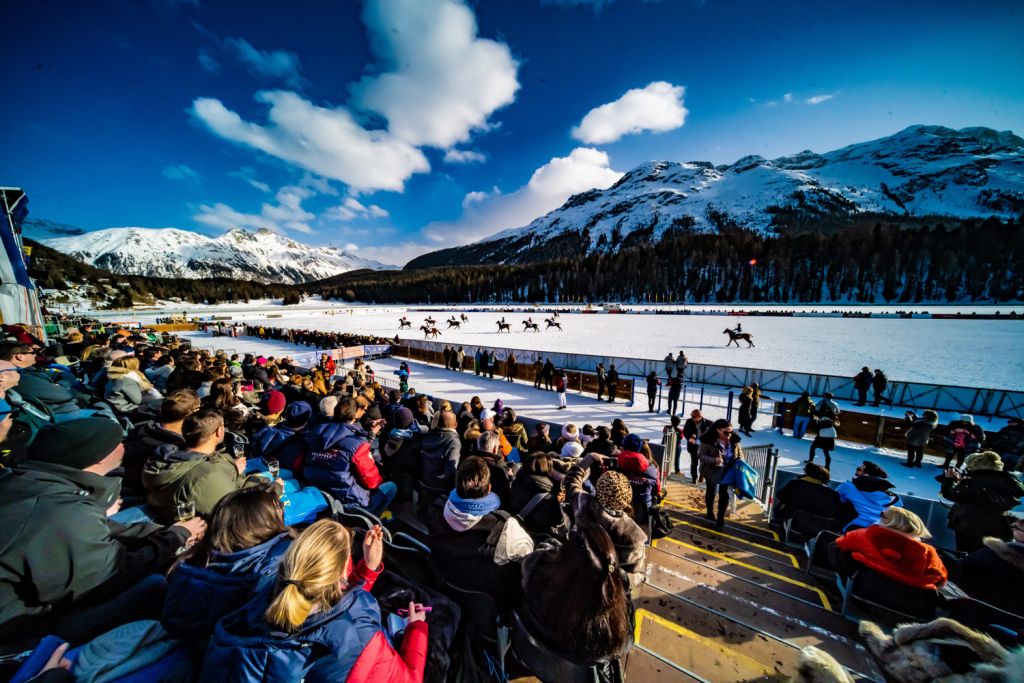 Record crowds have descended upon the iconic frozen lake, set in the beautiful, sun-bathed setting of the Engadin Valley, to watch the snow polo giants do battle. The sunshine is super-hot, the champagne ice-chilled, the setting unbeatable and the polo truly world-class. 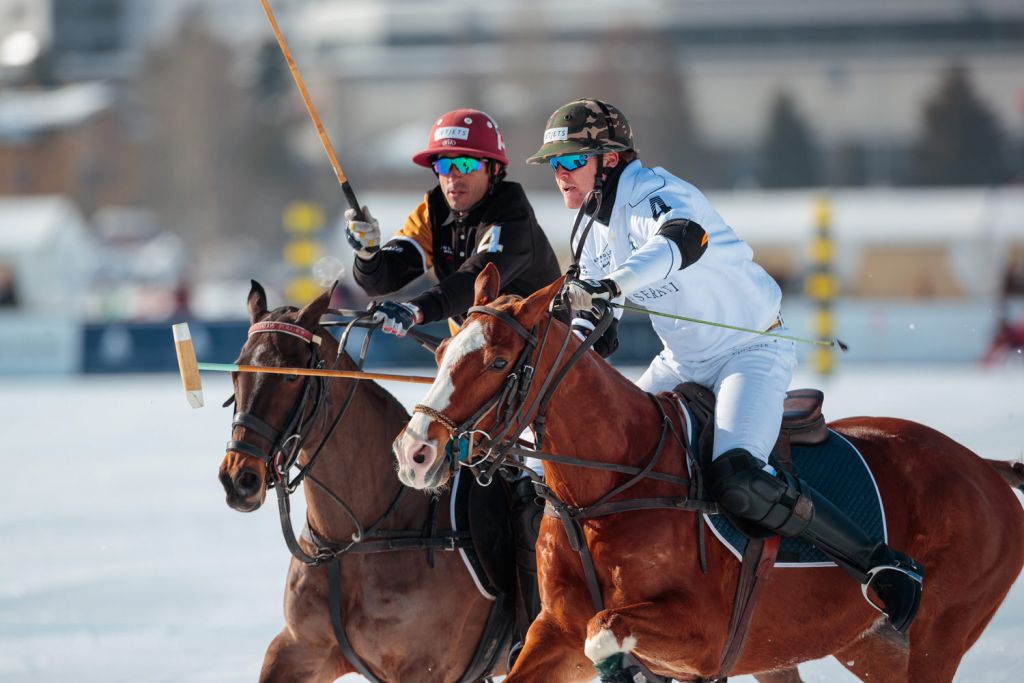 The first match of the day was the La Martina Trophy played between Badrutt’s Palace and Maserati for third and fourth place. Melissa Ganzi made history last year by being crowned as the ‘First Lady of Snow Polo’ to secure victory for her team as the first female player to do so. This year it was another first for the Ganzis as Melissa was joined on her team by her husband Marc’ The Red Cobra’.

The couple is the first husband and wife duo to play in a Final in St. Moritz – and what a match it was. Those that had been expecting the players to merely go through the motions were proved wrong from the first throw-in as Maserati seized on the ball and scored within seconds of the starting bell; quickly capitalising on the 2½ goal lead they had for goal allowance.

But the impressive work rate of the USA’s premier player, Nic Roldan teamed with the amazing eight-goal skills of his teammate Alejandro Novillo Astrada showed that Badrutt’s meant business from the get-go.

They were clearly not taking the Maserati attack lightly as they swiftly notched up two goals to make it anybody’s game 3½-2 in Maserati’s favour at the end of the first chukka. As the teams fought for possession in a wonderful, almost whistle-less passage of play, an amazing goal from Roldan and one in reply from Adrian Laplacette Jr. meant it was too close to call at half-time with the scores resting at 5½-3. There was no score in the third chukka, but this did not reflect the end-to-end display of world-class polo as the battle for third place continued.

The fourth chukka was pure edge of the seat stuff as Swiss National Team player Fabio Meier delighted the crowd with an amazing goal for Maserati to match that of any higher handicapped player.

However, Meier’s goal seemed to ignite the afterburners of the Badrutt’s Palace team with Novillo Astrada scoring from a great setup by Melissa Ganzi, followed just 30 seconds later by him once again finding the posts. In a nail-biting cliffhanger and with just over a minute on the clock. It looked as though last years’ champions were going to pull a proverbial rabbit out of the hat as a penalty was awarded to them.

But it was not to be as the ball went wide, final time was called, and Maserati ran out the winners with a close victory of 7½ goals to 5.

An expected Clash of the Titans
So it was on to the climax of the weekend: The Final between Azerbaijan – Land of Fire and St. Moritz. After the clash between these two teams only yesterday, which resulted in a very close score, it was certainly hard to predict who would be victorious. 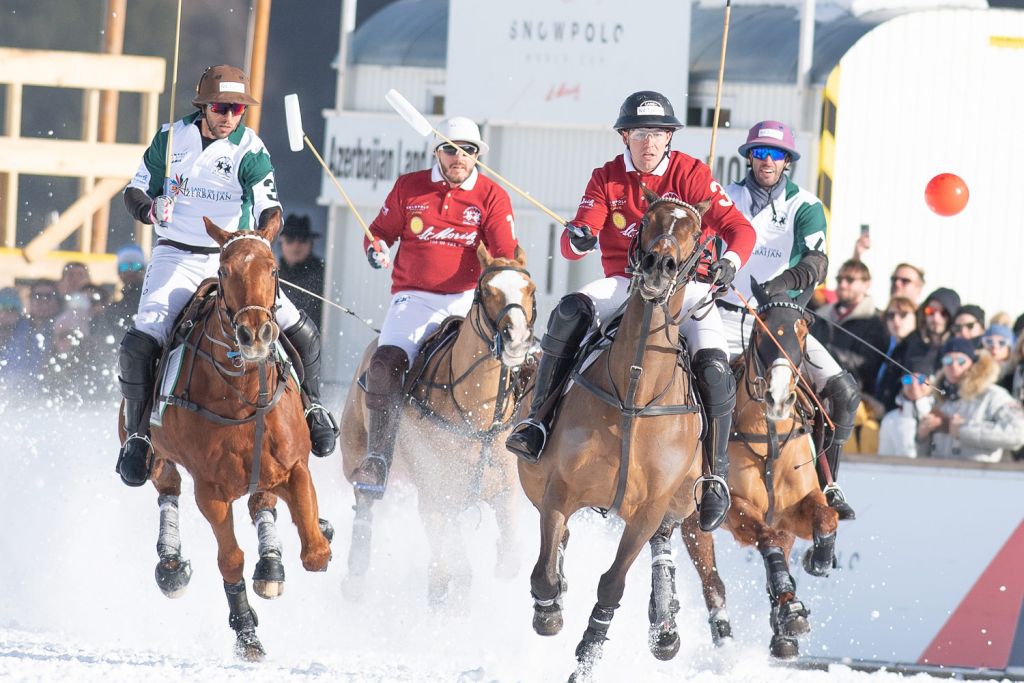 Talk in the players’ ranks was of an expected Clash of the Titans with both teams giving their all to secure the coveted title in this, the 36th year. The Azeri team started with a half goal advantage due to handicap, but despite expectations of a cohesive and multi-faceted attacking style, the boys in white did not ignite their polo fires, and the result was that Valery Mishchenko’s ‘Red Devils’ in the iconic scarlet shirts of St. Moritz found the posts twice before the half time bell with nothing in reply from the Azeris. 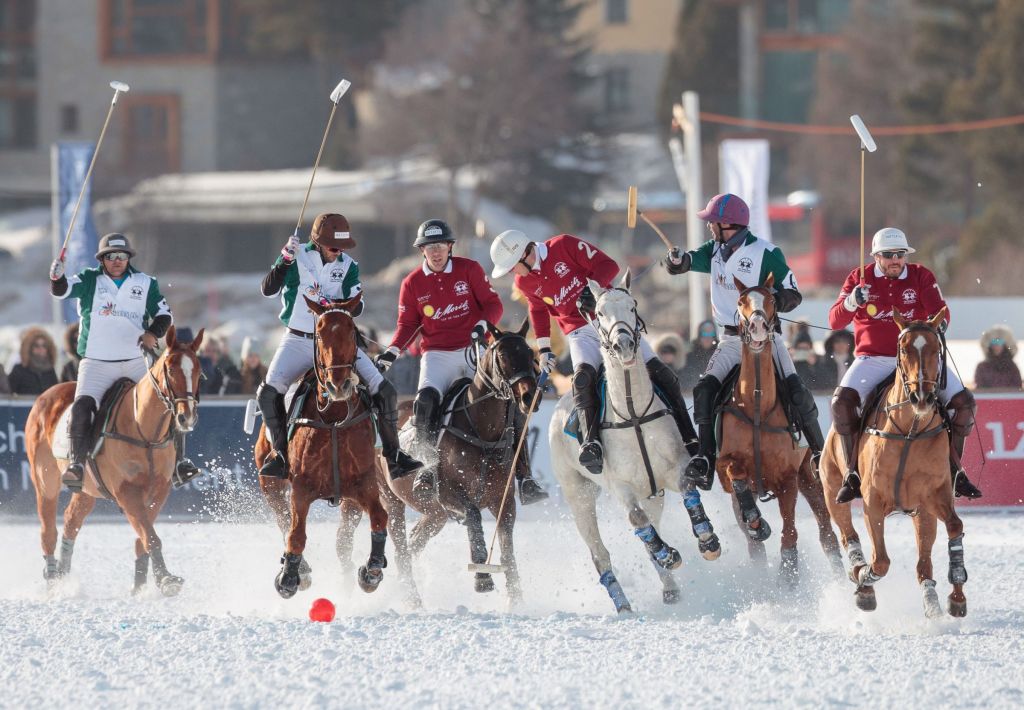 In the second half, the Azerbaijan – Land of Fire team rekindled their polo flame and began to give ten goal arena player Max Charlton and four-time winner of the event, Nacho Gonzales, something to think about with a changed game plan.

However, together, team St. Moritz played strong, close polo and despite their best endeavours, the Azeri team could not sufficiently shut down Max Charlton and his red-shirted polo assassins in their quest for victory.

With the wind beginning to pick up, it meant that accuracy on goal was hard, and two pivotal goal chances were missed by Azerbaijan, but it was a case of third time lucky as a goal from the Azerbaijan Captain, the talented Elchin Jamalli signalled the start of their offensive attack bringing the scores to a close 1½ -3. 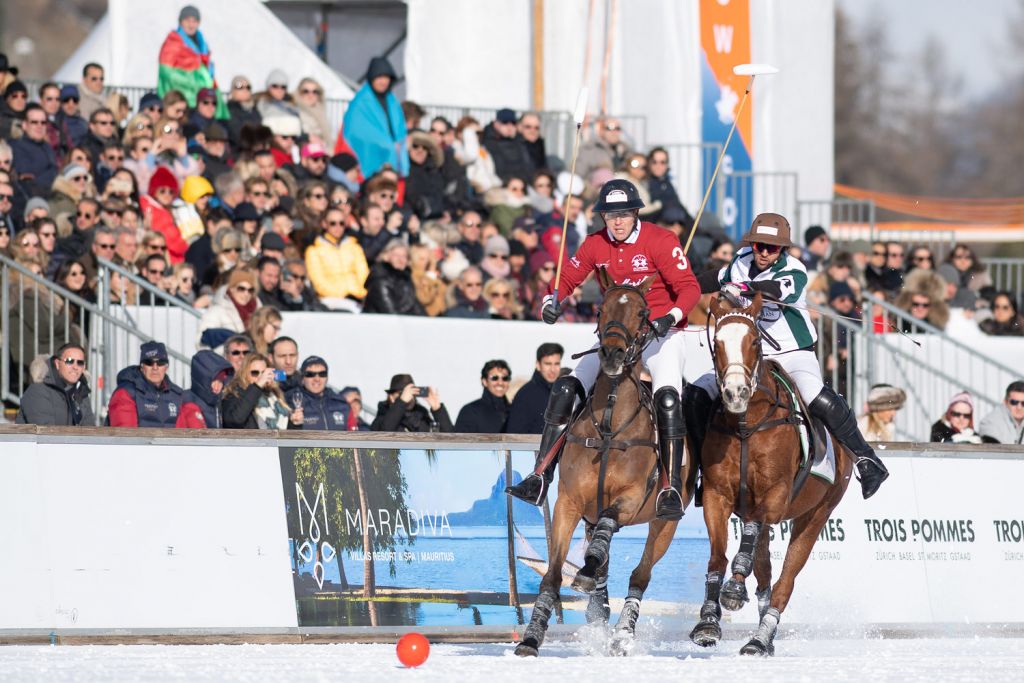 The fourth chukka was thrilling, but it was Robert Strom who needs a special mention – the Frenchman’s work rate was off the chart, with an easy, fluid style that attracted little response from the two mounted umpires. His endeavours were rewarded with a great goal that sealed the deal for his team. As the final bell sounded, the final score was 1½ -4. 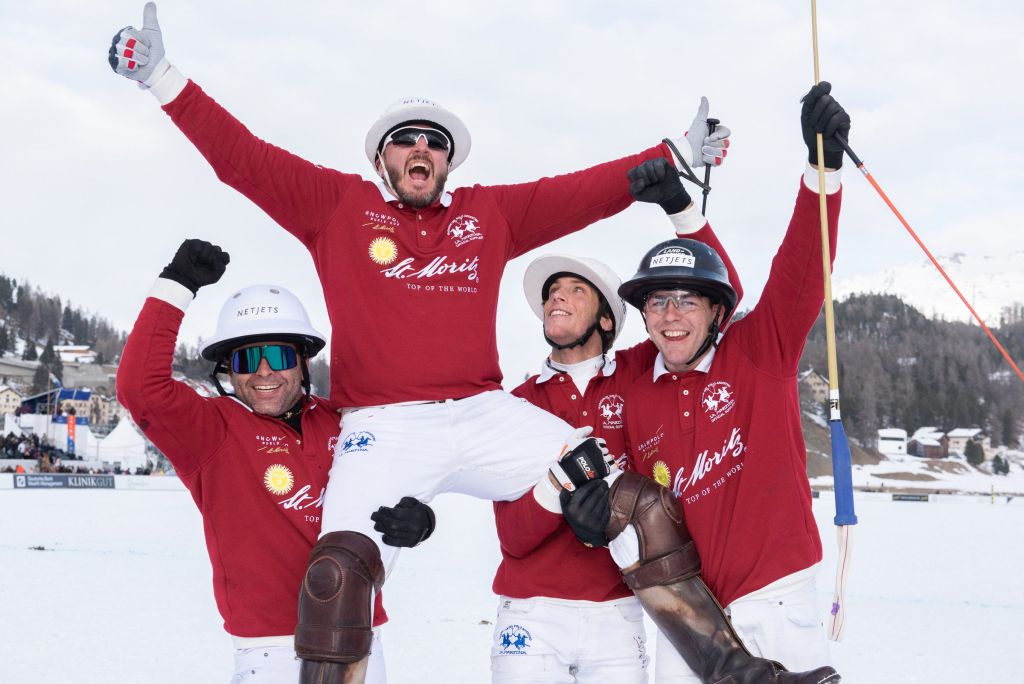 And so, after such an amazing three days of fantastic polo, the birthplace of polo bid farewell to the 36th edition of the event. The Snow Polo World Cup St. Moritz 2020 had managed to surpass all expectations and had once again been a triumph at every level and a credit to Reto Gaudenzi and his 250 strong team.

The iconic resort of St. Moritz had achieved the pinnacle of beauty, hospitality and world-class polo. If you were not here this year, you have missed out on something truly special. Be sure to make a note right now of The Snow Polo World Cup St. Moritz 2021 on 29, 30 & 31 January 2021!