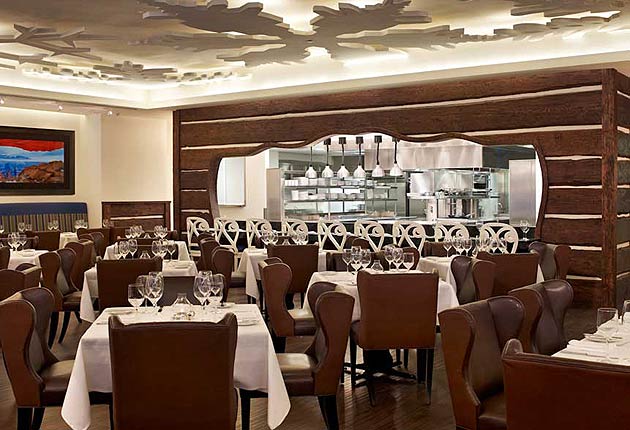 An innovative new food and dining concept arrives. The Chefs Club by FOOD & WINE will select a group of FOOD & WINE’s Best New Chefs to curate a unique menu of seasonally-inspired cuisine for The St. Regis Aspen Resort.

Chefs Club by FOOD & WINE at the St. Regis Aspen Resort portrays a sophisticated collaboration of two iconic brands that will literally bring the pages of the magazine to life. FOOD & WINE will select from their coveted list of “Best New Chefs” to consult and curate new menu items in collaboration with the culinary team at the resort to create an epicurean experience beyond expectation. Chefs Club by FOOD & WINE offers an ambiance as distinctive as its menu concept. Wood beams contrast with modern lighting above the bar, in addition to a snowflake-inspired pattern on the ceiling. Distinguished indoor seating is heated by the grand fireplace; outdoor seating is available as well. 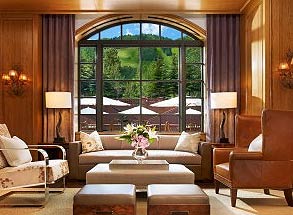 FOOD & WINE’s Best New Chef award winners will rotate the menu twice a year and occasionally make appearances at the resort to showcase the concept to guests and local residents alike. The chefs chosen to create the restaurant’s first menu are 2011 winners George Mendes of Aldea in New York and James Lewis of Bettola in Birmingham, Alabama; 2010 winner Alex Seidel of Fruition in Denver; and 2008 winner Sue Zemanick of Gautreau’s in New Orleans.   Additionally, FOOD & WINE editors will customize wine and cocktail lists to complement updated menus. Executive Wine Editor Ray Isle will pair wines with the Best New Chefs’ dishes. Meanwhile, Jim Meehan—one of the nation’s top mixologists, a FOOD & WINE Contributing Editor, and Deputy Editor of FOOD & WINE Cocktails—will craft an original selection of cocktails.   Chefs Club by FOOD & WINE at The St. Regis Aspen Resort will be open for lunch and dinner seven days a week, and will feature an open kitchen and a chef’s table along with several private dining areas. The art displayed will be selected updated biannually by local artists.

Each of the “Best New Chefs” selected for collaboration at Chefs Club by FOOD & WINE have been choosen based on their passion and unique culinary vision. The menu created will feature dishes with an seasonally inspired focus, with each chef bringing exceptional items to the table based on their experience and culinary expertise.

Chef James Lewis of Bettola
James Lewis cultivated his culinary style around Italian principles of simplicity and quality. As chef and owner of Bettola Restaurant, Lewis regularly returns to Italy to work and study with leading culinary masters, including Chef Antonio Pisaniello and Dario Cecchini. Lewis’ soulful approach to the culinary arts embodies his commitment to authenticity. As a child, Lewis prepared Sunday lunches with his grandmother and in turn, inherited her love of cooking. Spending most of his life in Alabama, he wanted to do more than cook traditional southern food. His passion for learning the origins of many traditional items enabled him to create a dining experience deeply rooted in Italian styles of preparation and cooking. 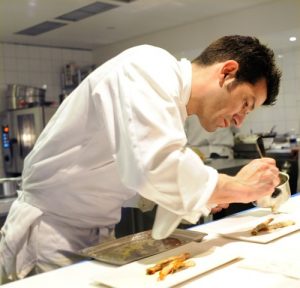 Chef George Mendes of ALDEA
George Mendes cultivated his culinary knowledge, technique and style over a period of seventeen years. He has had the privilege to work under the guidance of some of the world’s greatest culinary masters before opening his first restaurant, ALDEA, in May 2009. Mendes’ restaurant has won several distinguished awards over the years including a one star rating from the 2011 and 2012 Michelin Guides. In 2011, Mendes was named one of FOOD & WINE magazine’s ten “Best New Chefs”, a highly coveted honor in the culinary industry. As a Connecticut native, Mendes was surrounded by culinary influences in his own home. Mendes enjoyed a childhood full of home cooked meals inspired by his parent’s native Portugal. After graduating from the Culinary Institute of America in 1992, Mendes worked for David Bouley, his mentor, at the original Bouley in Tribeca. He further tailored his skills in culinary meccas like Paris, San Sebastian and Washington D.C., where he learned many of the techniques he now practices today in his restaurant. The menu at ALDEA, the Portuguese word for village, is a culmination of Mendes’ Iberian experiences and Portuguese heritage. The meaningful experiences of his varied career are apparent in the rustic yet refined dishes prepared. Diners and critics alike celebrate the seasonal shellfish, rice dishes and Iberian-cured hams served at ALDEA.

Chef Alex Seidel of Fruition
Alex Seidel began his culinary journey at age 14 in his home state of Wisconsin. His passion for the culinary arts allowed him to progress quickly from line cook to Sous Chef of Main Street Bistro by age 20. Seidel went on to study at Western Culinary Institute in Portland, Oregon where he graduated at the top of his class. After graduation, he moved to the California coast to work with the exceptional local produce. Seidel worked for several prestigious restaurants like Hubert Keller’s Club XIX at Pebble Beach Resort and Antoine Michelle, until he became Chef at Carmel Valley Ranch. A spontaneous visit to Vail, Colorado left Seidel enamored by the natural setting and quality of life the Rocky Mountains had to offer and he soon found himself as the Chef De Cuisine at Sweet Basil, one of Colorado’s most renowned establishments. To further his education, Seidel travelled to the extraordinary countries of France, Italy and Morocco. He had the rare opportunity to experience first-hand foods that formed his foundation in French cooking techniques. He took the knowledge from his travels and applied them to his new position as Executive Chef at Mizuna in Denver, Colorado. Over his four year tenure at Mizuna, Seidel grew as a chef and began to understand what it takes to be a successful restaurateur and opened his first restaurant, Fruition, in down-town Denver. Fruition earned recognition from many publications like the Denver Post, Gourmet Magazine and Denver’s 5280 Magazine. The restaurant was rated one of the top 10 new restaurants in the U.S. for 2007 on Gayot.com. Zagat Guide also honoured Fruition by rating the food highest in the state of Colorado. Most recently, FOOD & WINE magazine named Seidel one of its 2010 “Best New Chefs”.

Chef Susan Zemanick of Gautreau’s Restaurant
Susan Zemanick began her culinary career at age 15 while working in many fine dining restaurants in Wilkes-Barre Pennsylvania. Learning quickly of her passion for the culinary arts, she enrolled at The Culinary Institute of America in Hyde Park, New York. Zemanick graduated in the top of her class and was offered a position as fellow with a Chef-Instructor in the seafood department. To further develop her love for seafood, Zemanick moved to New Orleans where she began cooking at Commander’s Palace. She eventually moved on to work at Gautreau’s Restaurant under Top Ten Food and Wine Winner, Mat Wolf. In 2005, Zemanick was promoted to Executive Chef.