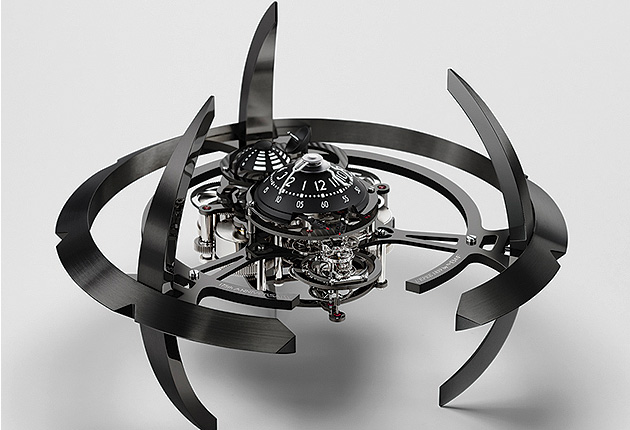 It’s nothing new to see one of L’Epée 1839’s high-end, Swiss-made timepieces flying over the Atlantic at twice the speed of sound: L’Epée’s beautifully-crafted wall clocks were chosen to furnish Concorde cabins when the supersonic aircraft entered commercial service in 1976. Unfortunately Concorde is no more. However, thanks to the aero-horological design team at MB&F, there is now another supersonically-themed L’Epée clock, which will not only traverse the stratosphere, but explore deep space and beyond: Starfleet Machine!

Hours and minutes are indicated on the central black dome by hand-polished hands that follow the dome’s curved contours. Behind that, a smaller rotating dome, accompanied by a revolving radar dish, provides an intuitive view of remaining energy: five bars indicates the movement is fully wound (40 days of power); one bar means Starfleet Machine is running low on propellant (eight days of remaining power) – it’s all relative – most table clocks have a maximum power reserve of only eight days.

Below 12 o’clock on the central hour-minute dome are the double retrograde seconds in the form of turret-mounted laser cannons. The cannons start in parallel and cross over one another before rapidly flying out again, an action marking off 20-second intervals. The red-tipped cannons provide eye-catching visual animation, and perhaps just as importantly, fend off enemy attacks against the core of the craft just underneath: the regulator, which has deliberately been placed in full view for all to admire.

One of the biggest challenges for L’Epée was respecting the movement configuration required by MB&F’s spacecraft design. L’Epée’s calibre – featuring five main spring barrels (in series for optimal performance) – usually equips vertically standing clocks, but here it is laid flat. The escapement platform also had to be set horizontally to be protected by the turret-mounted laser cannons. Naturally, the movement beats with a precision that Starfleet would be proud of, for an impressive accuracy of -2 to +2 minutes over 40 days!

Every component (except the 48 jewels) of the superlatively finished palladium-treated brass movement is designed and manufactured at L’Epée’s Swiss atelier. The gears and mainspring barrels are on full display thanks to the skeletonised mainplate and concentric C-shaped external structure in stainless steel. Starfleet Machine can rest on both ends of its vertical landing gear; useful for when you turn it over to wind the mainspring and set the time.

Starfleet Machine is limited to 175 pieces and is available in ‘light’ or ‘dark’ editions, the latter with ruthenium-finished components.