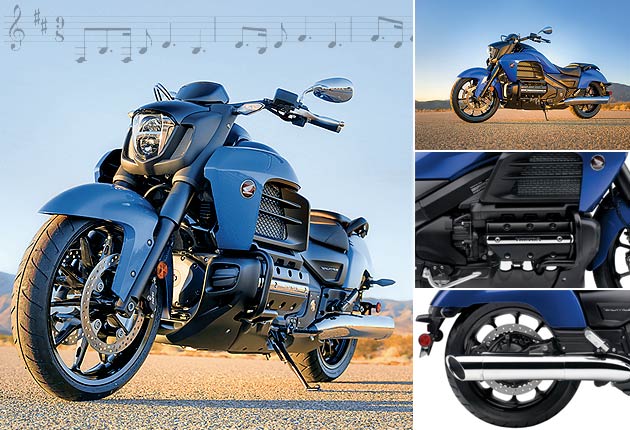 For the second time this month, Honda has announced some huge news. First we had the Gold Wing F6C and the CB1100EX and now Honda has brought back the legendary Valkyrie super-cruiser.

Bringing back and upgrading icons from the motorcycling world is a winning formula, nostalgic fans, new fans and enthusiasts can join together to dream, buy and indulge in these spectacular two-wheeled marvels. The Valkyrie’s return is a stroke of genius, take a legendary machine, strip it down to the essentials to shed pounds, wrap it in minimalist bodywork and power it with an engine that produces ground-shaking torque and an unmistakable six-cylinder howl. The core of this remarkable custom is Honda’s unique 1832cc liquid-cooled horizontally opposed six-cylinder engine that also powers the Gold Wing and Gold Wing F6B. With an awe-inspiring power-to-weight ratio, aluminum twin-spar frame and suspension system tuned for serious riders, the Valkyrie is all about unparalleled performance and style.

The curb weight is a remarkably low 750lbs, likening the Valkyrie to a welterweight boxer with a heavyweight punch coupled with a few modern touches. LED headlight, taillight and turn signals, multi-function digital LCD instrumentation and available Anti-Lock Braking System.

“Today a motorcycling icon returns in all-new form,” said Powersports Press Manager Bill Savino. “The Valkyrie is back, but this isn’t a motorcycle that celebrates the past. This is a cruiser unlike any other for people who want to seize the future, who appreciate distinctive style, who want the kind of performance no cruiser can match. The Valkyrie redefines the term “muscle cruiser. The Valkyrie is an enthusiast-based motorcycle targeted at serious riders looking for a special ride that sets them apart from the crowd and also delivers performance that’s clearly a cut above the rest. True to its iconic name, the Valkyrie targets the hearts and souls of enthusiasts in a way that only Honda can.”

The Honda Valkyrie is beautiful, the type of motorcycle that would make small children stop licking an ice cream cone, a bike that would make older bikers smile and younger bikers stare. It’s a very different bike to almost any other, it needs to be seen, sat upon and experienced to be believed.

The Valkyrie should be available in April, price has not been published and is available in Black, Dark Red Metallic, Blue Metallic.