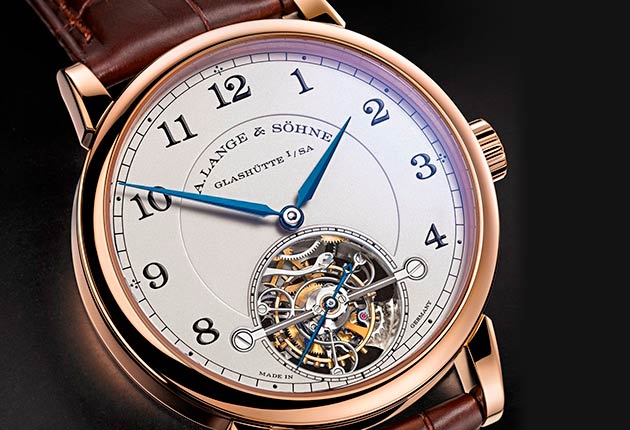 German watchmaker A Lange & Söhne has a history dating back nearly 170 years.

Ferdinand A Lange established the company in 1845 in the picturesque location of Dresden. Originally he produced exquisite pocket watches for discerning clients. Due to the effect of World War II the business suffered and went into liquidation. In 1990 the founder’s great grandson Walter Lange revived the brand. Presently they manufacture an exquisite range of limited edition timepieces in platinum and 18 Karat gold.

In the last twenty years (under the helm of Walter Lange) A Lange & Söhne has developed forty in house calibres. To have the capacity and technical expertise to manufacture these movements is an enormous achievement. It has also made them a very important player in the world of horology. In January the company unveiled a range of new models at the prestigious Salon International de la Haute Horlogerie (SIHH) in Geneva. This show is more exclusive than Baselworld and is predominantly attended by members of the Richemont Group. Nevertheless there were some incredible timepieces on display this year including the 1815 Tourbillon.

When I write articles for Luxurious Magazine I try to make the content as diverse as possible. Even though Paul Godbold (owner) and myself have different tastes in watches we always appreciate quality craftsmanship. On that basis I know we will both agree that the 1815 Tourbillon is a beautiful timepiece. Dimensionally the watch measures 39.5mm x 11.1mm, which is small compared to many watches available on the market. These classical proportions should appeal to a range of serious collectors including the lucrative Asian market. I also feel this watch would sit comfortably on the wrist. Primarily this is down to the elegant case design and choice of opulent platinum used in production. Realistically this watch could be worn for most occasions’ especially formal functions.

Visually the 1815 Tourbillon has a distinctive and high quality appearance. The solid silver argenté is a stunning and perfectly contrasts with the blued steel hour/minute hands. For this model A Lange & Söhne have substituted the small second counter (positioned at 6 o’clock) with a magnificent rotating tourbillon. Other stylish features include the bold black numerals and delicate crown. Overall the composition is understated and the finishing superlative.

To power the watch A Lange & Söhne have developed a highly sophisticated manual winding movement. The calibre L102.1 comprises 20-Jewels (including one diamond endstone) and oscillates at a frequency of 21,600 vibrations per hour. Each of the 260 components has been assembled and decorated by hand. It is also pertinent to mention the plates and bridges have been constructed from untreated German silver. Functionally the 1815 Tourbillon features hours, minutes, patented stop seconds and patented ZERO-RESET mechanism (via the one minute rotating tourbillon). The watch also has a respectable power reserve of 72-hours.

The 1815 Tourbillon in platinum is limited to 100 pieces and comes with a hand stitched black crocodile strap.

You can read more watch reviews by Steve Huyton on his own website www.totalwatchreviews.com