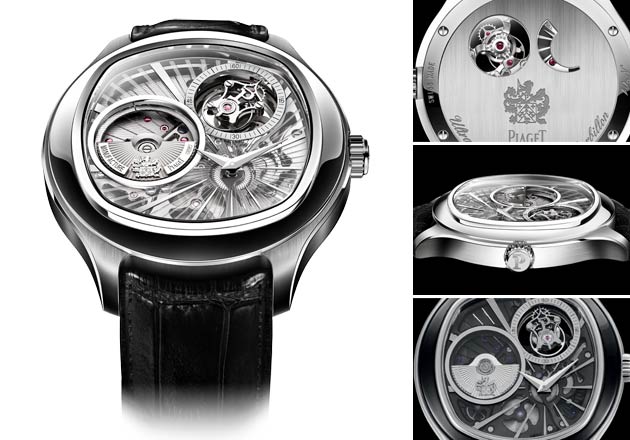 Initially he produced a range of highly intricate clock movements and pocket watches from his workshop situated on the family farm. In 1911 Timothée Piaget took his fathers position as head of the family business and concentrated solely on the production of wristwatches. Subsequently the founders grandsons Gérald and Valentin Piaget took the helm and expanded the brand significantly.

In 1943 the Piaget brand became a registered trademark. From their manufacturing facility in La Côte aux Fées they created the first ultra thin mechanical hand winding movement. Amazingly the Calibre 9P measured only 2mm. This was followed in 1960 by the 2.3mm Calibre12P, which officially was recognized by the Guinness Book of Records as the thinnest automatic movement in the world. Since 1988 the brand has been owned by the giant luxury goods holding company Richemont SA. Under their guidance they have produced many wonderful timepieces including the sensational Emperador Tourbillon.

Of the many beautiful timepieces Piaget has created the Emperador Tourbillon is definitely my personal favourite. With measurements of 46mm x 10.4mm (excluding the crown and lugs) this is certainly one of the companys larger offerings. These dimensions are designed to make a statement and will appeal to the discerning buyer. I would also imagine this watch would sit comfortably on the wrist and feel fairly lightweight to wear. Primarily this is down to the slender cushion case and choice of opulent 18K white gold in production. Due to the exclusive nature of this watch and limited numbers I can only imagine it would be worn on very special occasions.

Recently I have written numerous editorials about exquisite skeleton watches. In my opinion the Emperador Tourbillon is a perfect example of this genre. The black background of the dial delicately contrasts with the intricate mechanical workings of the movement. I love the two large apertures exposing the engraved gold rotor (positioned at 9 o’clock) and the imposing tourbillon (positioned at 1 o’clock). Other attractive elements include sunburst indexes and baton style hour minute hands. Overall the composition is incredibly effective and the attention to detail absolutely first rate.

Beneath the stylish exterior lies the highly sophisticated Calibre Manufacture Piaget 1270P. This self winding tourbillon movement comprises 35 jewels and oscillates at a frequency of 21,600 vibrations per hour (3Hz). Amazingly the thickness of the mechanism measures only 5.5mm and contains an astonishing 270 components. All of these parts have been meticulously decorated using traditional techniques (circular graining, Côtes de Genève) and are visible through the sapphire crystal case back. The Emperador Tourbillon features hours, minutes, tourbillon and a power reserve of 40 hours. It also is water resistant to a depth of 30 metres.

The Emperador Tourbillon has a hand sewn black alligator strap with matching 18k folding clasp and is limited to only 18 pieces.

You can read more reviews by Steve Huyton at www.totalwatchreviews.com