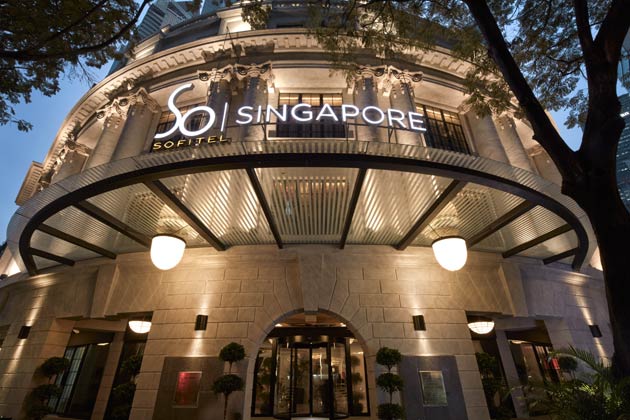 Ong Chin Huat visits the newly opened Sofitel So Singapore located in the heart of city-state’s Central Business District and discovers an on-trend boutique hotel that’s both comfortable and sophisticated and redefines luxury boutique accommodation in the Lion City. 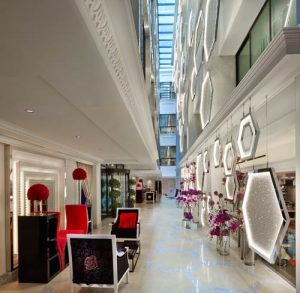 Walking into the light-filled and airy lobby of the newly opened Sofitel So Singapore is akin to entering a fashionable and hip cocoon of pure luxury and refinement. The helpful and friendly staff look smart and dashing, and why wouldn’t they? After all their stunning black and white suits are specially designed by Karl Lagerfeld, who was commissioned by the hotel to put his final graphic touches to the Sofitel So Singapore.

Housed within an iconic neo-classical heritage building first built in 1927, the building served as the headquarters of Eastern Extension Telegraph Company which was given conservative status in 2000. Unique art works, fresh flowers and conversation-starting light fixtures make this lobby both welcoming and enticing. A captivating hexagonal light installation made from stainless steel and crystal called L’Hexagone, is the focal point for the entrance and lobby. Other attractions include a plush ‘bed-table’ placed in the stunning restaurant and the library, called La BibiloteK is a quiet nook and provides the weary traveller the perfect spot to read the day’s news or catch up on emails. 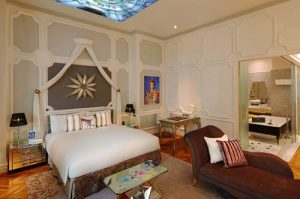 Heritage wing, I was immediately impressed with the design – white and grey panelled walls inspired by 19th century French decadence with touches of quirkiness – a portrait of Napoleon with the words “All roads lead to Singapore” which hung above the desk put a smile on my face. Indeed, there were elements of humour scattered around the room, with sayings incorporation the word ‘So’. A vanity case in the bathroom which held toiletries and the sweet smelling fragrance specially created for the hotel by Urban Rainforest had the expression “Looking Oh-So Good” inscribed on it while a velvet-lined jewel box for valuables placed on the bedside table had the words “So Precious Box” printed on it.

A mini-iPad placed on the bedside table controlled the lighting, curtains, Do Not Disturb or Make My Room signs and air-con. Worth mentioning is the different types of lighting already pre-set for the guests – so if you want a Relaxing ambiance, a Good Morning lighting or a Good Nite one, just touch the appropriate app and the room magically transforms into the mood you are after. A light box with a photograph of the interior of a glass dome from a historic European building is place on the ceiling above the bed, so it’s the first thing you see when you wake up. On the first morning of my stay, I had to remind myself I was in Singapore, and not in some chateau in France!

With the modern traveller in mind, Sofitel So Singapore is equipped with the world’s first completely Apple®-based guest technology solution in every room, and apart from the iPad minis to control all room functions, there are also iPhones in every room to call for hotel requests as well as to make free local calls. 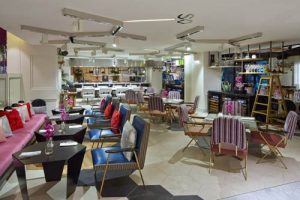 As fashion maestro Karl Lagerfeld collaborated with the hotel on certain objects and accessories, his stylish touches could be spotted everywhere – “The Lion’s Seal” Emblem designed by him are on bookends (called BooKube) placed in all the rooms as well as on knockers on the room doors in the So Heritage Wing. Inspired by the age-old story of the discovery of Lion City by a Sumatran Prince, Lagerfeld said, “Singapore is an Asian powerhouse – the city of the future. Stories of its history and evolution have inspired me, especially the discovery of the island and the mystical lion it was named after. The lion has historically symbolised courageousness, elegance and leadership. The Emblem is a result of that combined inspiration.”

Apart from bookends and door knockers, Lagerfeld also designed the bespoke bathrobes with honeycomb stitch called en nid d’abeille featuring the red and white ‘The Lion’s Seal’ embroidery hangs on red finger hangers in the bathrooms. The intimate and cosy La BibiloteK located in a corner of the lobby beside the Xperience Bar has a collection of books curated by Lagerfeld himself. The front-of-house ambassadors dressed in garde-robe straight from the fashion designer’s namesake collection, KARL LAGERFELD, greet guests as they walk through the hotel entrance.

General Manager, Tony Chisholm commented, “We have developed a completely original concept for Singapore with the new Sofitel So Singapore and look forward to welcoming our international and local guests. With the promise of an excellent hospitality experience from Sofitel combined with the playful luxury of the ‘So’ label, we are confident that Sofitel So Singapore will be an industry benchmark for service, design, gastronomy and an immersive cultural experience of Singapore.”

Xperience is the hotel’s signature restaurant and bar and a focal point of the hotel, judging from the cosmopolitan and stylish diners I saw there. With a relaxed yet stylish gastro-bar dining concept, Xperience is helmed by Chef Anne-Cecile Degenne, and diners are able to design their own customised menus, based on different culinary experiences – crunchy, juicy, smoky, creamy, silky, spicy and zesty – to name a few. Creating a fun and sociable environment while tapping into the increasing trend for family-style sharing, dishes are available in three sizes: XS for tasting, XM for a personal size and XL for sharing; with a complementary extensive cocktail list, allowing guests to choose drinks based on their mood or create something from scratch. Thirty-five wines by the glass ensure that all occasions can be catered to. Modern beats and music from the hotel’s resident and guest DJs adds vibrancy a hip vibe to the atmosphere of the restaurant and bar. The restaurant will invite internationally acclaimed Michelin-Starred Guest Chefs on a regular basis to add variety to their menu and dishes. 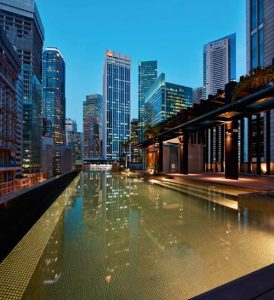 The exclusive rooftop bar, HI-SO, commands 360-degree views of Singapore’s urban-skyline, and is the place for the glamorous and fashionable young urbanites in Singapore to see and be seen. Guests stepping into HI-SO will be transported to a luxurious beach-club experience, complete with unique designer cocktails and delicious gourmet bites. Guests can bask in relaxing cabanas next to Singapore’s only golden-tiled swimming pool or groove to the music of the hottest DJs in town under the stars. Indeed, the weekend I was there, a pool party was in full swing and I saw the beau monde dressed in their trendiest outfits while sipping bubbly and sashaying around the pool.

Strategically located near Raffles Place, in the heart of Singapore’s Central Business District, Sofitel So is minutes away from the city’s most iconic landmarks. Within close proximity to various modes of public transport, Sofitel So Singapore offers guests the opportunity to embrace the cosmopolitan vibe of the island, from tasting the culinary delights of Chinatown and Lau Pa Sat to enjoying the attractions of Marina Bay.