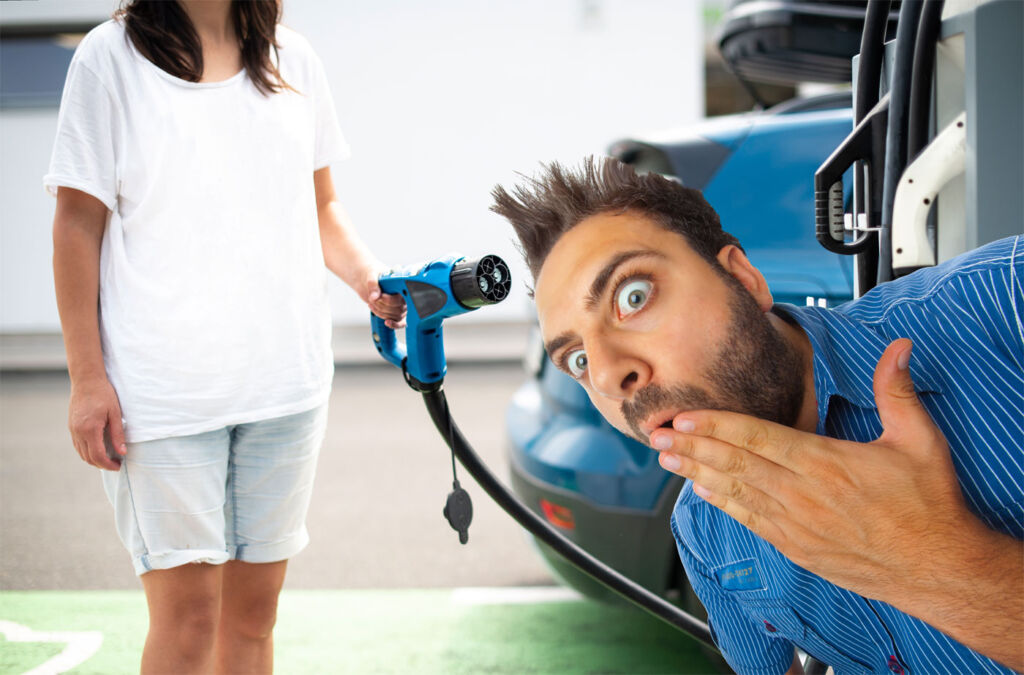 The hydrogen vs battery-powered car debate is heating up with the news that DLR’s €15,000 H2 Hydrogen-Powered Car could be on the horizon. Add to this that the price of Green Hydrogen is expected to fall further by 2025, and the choice of which platform to adopt becomes far less clear.

I am going to start by putting my cards on the table; I am still yet to be convinced by battery-powered vehicles and have never owned one. There is a straightforward reason for this. For many years I worked in the computer components industry, supplying to some of the most well-respected organisations in the world.

What I learned is that technology is superseded all the time, and the products they replace rapidly lose value and in some cases, become worthless. As much as I disliked it, I would walk through my warehouse with a glum look on my face knowing full well that my stock value was falling before my very eyes.

Paying out hard-earned money for any form of the latest technology is a risk. You’re purchasing only what is made available to buy today, and within a relatively short space of time, it will be out-of-date; sold for a fraction of what you paid or put in the bin. This will no doubt have been experienced by many who’ve purchased a high-end mobile phone or a notebook etc.

You can call me a conspiracy theorist, but I also believe that manufacturers have more capable technology in their arsenals and are deliberately not bringing it to the market. Instead, they’re drip-feeding marginally improved products each year to maintain a regular sales stream; there I’ve said it.

For almost everyone reading this, buying a new car comes down to two main factors, cost and capability. Through my eyes, the current range of new battery-powered cars are failing in both these respects; poor range and they are expensive to buy due to the high production cost of the batteries.

This is why the news provided to us by Block-Builders.net piqued my interest. Their infographic shows some positive steps forward in the field of hydrogen technology which will hopefully cause people to do more research before they pay a lot of money for something that could follow the same path as a high-end mobile phone. 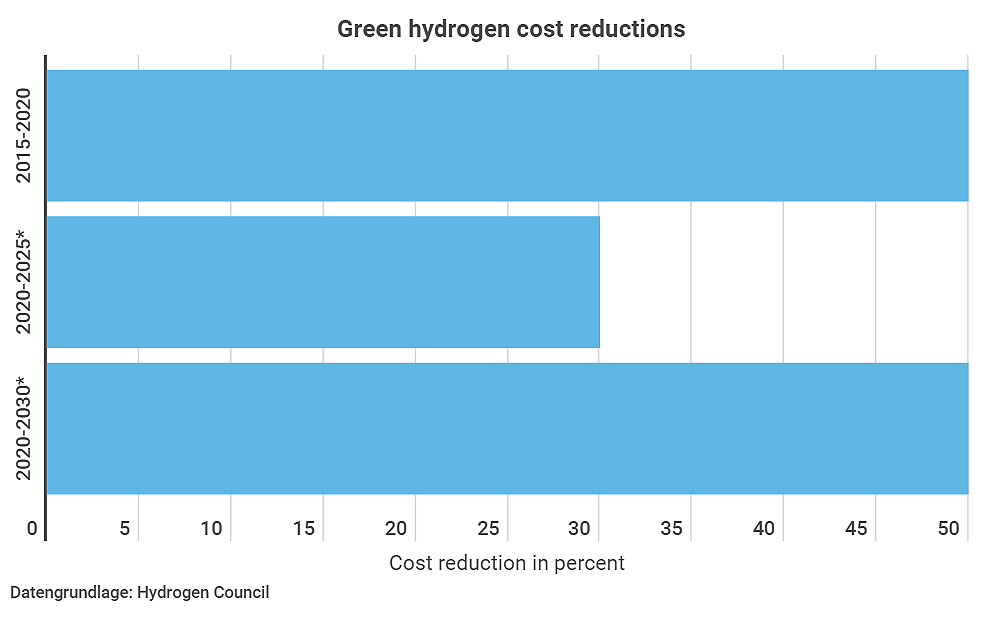 As the above chart shows the price of green hydrogen has fallen by 50% since 2015 and forecasts indicate that it will fall by a further 30% by 2025. There are also signs of a paradigm shift in the purchase price of hydrogen-powered cars. As I mentioned earlier, the German Aerospace Centre (DLR) has developed a low-cost model which could be sold for around €15,000. This is an absolute bargain price when compared to the price for a conventional new car in Germany which currently stands at €33,580. 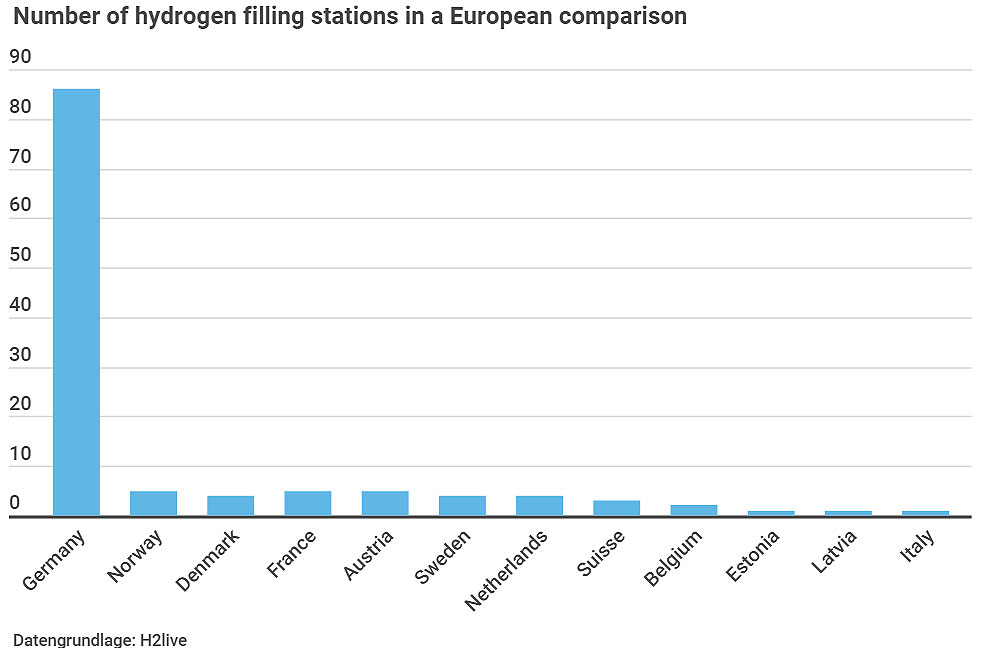 Even though Germany leads the field when it comes to hydrogen power, the level of station penetration is worryingly low. However, a change could be in the offing: there is ongoing research which if proven viable could allow consumers to install filling stations in their basement. Commercial production of this could possibly begin as soon as next summer.

Major corporations are also looking towards hydrogen power
More and more companies are also striving to gain a foothold in the hydrogen sector. Airbus, for example, plans to introduce a CO2-neutral H2 aircraft fleet to the market from 2035. In addition to this, Toyota is focusing on hydrogen for the HGV sector. This focus should help the technology to find its way into the private sector. 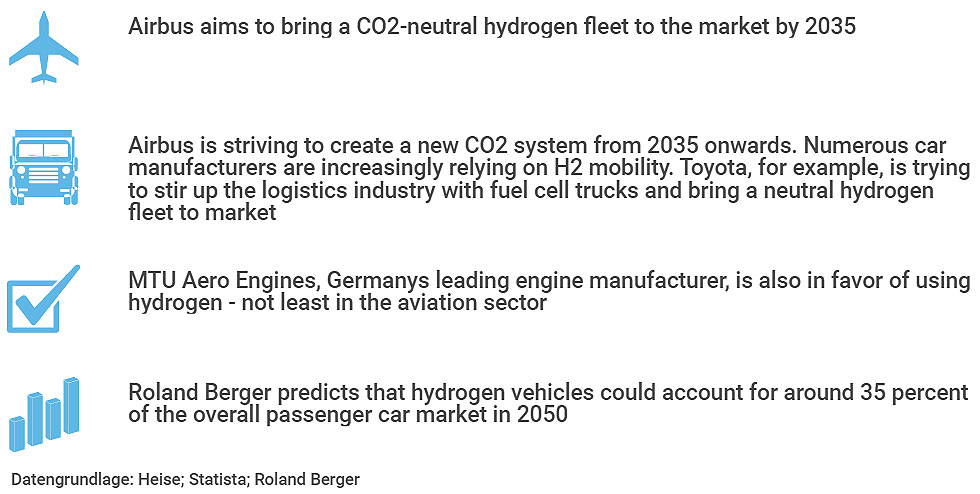 According to forecasts, the overall share of hydrogen vehicles in the passenger car market could reach around 35% by 2050. Meanwhile, the stock market is also sensing opportunities, with certain associated stocks rising by up to 450% within a single year.

“More and more players are venturing into hydrogen technology and see great opportunities,” observes Block-Builders analyst Raphael Lulay. “Nonetheless, major hurdles still remain. The survey does, however, show that considerable progress has recently been made in many challenging areas”.