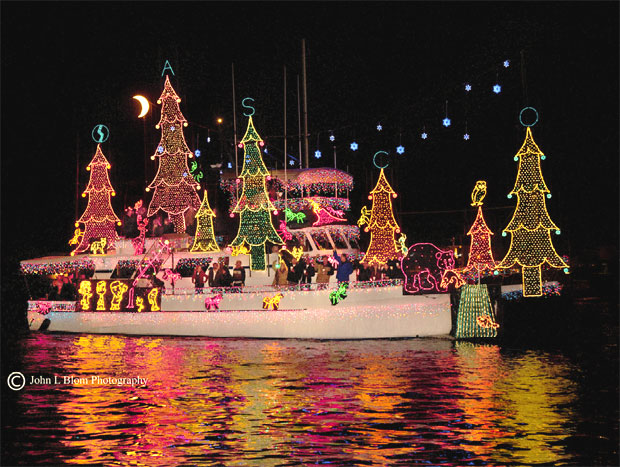 Why not join nearly a million viewers watching over 200 stunningly decorated yachts, boats, kayaks and canoes sail along the harbour in the 103rd Annual Newport Beach Christmas Boat Parade.  The 103rd Annual Newport Beach Christmas Boat Parade will set the harbour ablaze for five consecutive nights, beginning Wednesday, December 14 and ending Sunday, December 18, 2011, and is hosted by the Commodores Club of the Newport Beach Chamber of Commerce.  Locals and visitors are invited to attend this free, family-friendly event to celebrate the year as the parade features the theme “Feelin’ Christmas-Sea in Newport Beach!”

“The 103rd Annual Newport Beach Christmas Boat Parade, California’s Christmas Card to the world,” says Richard Luehrs, President & CEO of the Newport Beach Chamber of Commerce, and organizer of the event. “Since its inception in 1908 when the first ‘tournament of Lights’ was established by Italian Gondolier John Scarpa. “The parade continues to be a premier event during the holiday season in Southern California and is truly a magical holiday tradition for all ages.”

The Annual Newport Beach Christmas Boat Parade has been hailed as “One of the Top Ten Holiday Happenings in the Nation” by the New York Times, and voted “#7 of the World’s Best Holiday Lights” by Frommer’s. Competitors include beautiful multi-million dollar yachts and sail boats, to simple kayaks, canoes and other small boats. All of them will be richly decorated, some with animated Holiday scenes, and others accompanied by music and costumed carolers. The 103rd Annual Newport Beach Christmas Boat Parade attracts competitors of all stripes, with some owners spending over $50,000 to decorate their vessels for this one event.

The dazzlingly illuminated vessels float in line along a 14-mile route around the Newport Harbor and offer viewers in restaurants, yacht clubs, on public beaches, and in private homes an incredible sight that has delighted millions of people for over a century.  For first timers, a great place to view the parade is at the Fun Zone on the Balboa Peninsula. Admission is FREE and there is plenty of nearby parking.   Additionally from the Fun Zone, the voice of the parade, Captain Mike Whitehead, will be offering lively commentary from the Explore Ocean – Newport Harbor Nautical Museum every night of the parade, and one evening, broadcasting live on CRN Digital Talk Radio reaching parade fans from coast to coast.

Serving as the backdrop for the hundreds of lighted boats in the parade is the annual “Ring of Lights” contest, hosted by the Commodores Club of the Newport Beach Chamber of Commerce. Beautifully decorated bayside homes and businesses surrounding the harbour go “all out” with their own holiday spirit, featuring everything from roof-top animated scenes to dancing Christmas trees. With its own judged categories and prizes awarded, the “Ring of Lights” has become as celebrated as the boat parade itself.

On the final night of the parade, Sunday, December 18, a special fireworks display will close out the parade. Beginning at approximately 9:00 pm, the fireworks will be visible from all around the harbour, being launched from the Balboa Pier. Special thanks to Ruby’s Balboa Pier for closing early to allow for the fireworks show.

Both the Boat Parade and the Ring of Lights competitions culminate at the annual Awards Dinner & Auction to be held on January 27, 2012 at the Balboa Bay Club. Open to the public, this gala event will honour award winners from both competitions. Additionally, the party will feature live entertainment, dancing and an incredible live and silent auction.

The event is presented by Simple Green, Meguiar’s and the City of Newport Beach, hosted by the Commodores Club of the Newport Beach Chamber of Commerce, and is partnership between various community and civic entities, including Visit Newport Beach, Inc. and event sponsors. The Commodores Club is a council comprised of actively involved members of the Newport Beach Chamber of Commerce providing leadership, organization and fundraising support on business, social and community special events that promote the overall mission of the Chamber.