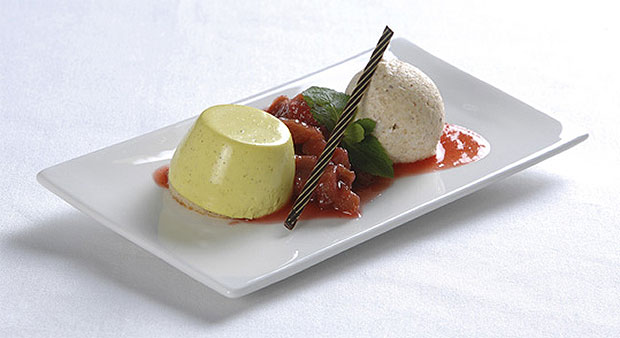 Swiss will be serving its long-haul First and Business Class guests specialities from Switzerland’s Canton Ticino for the next three months.

The latest meals in the airline’s award-winning “Swiss Taste of Switzerland” inflight culinary programme have been created by Frank Oerthle, chef de cuisine at the Galerie Arté al Lago restaurant in Lugano, and will be served with top Ticino wines and cheeses, too.

The award-winning service concept Swiss Taste of Switzerland pampers you with culinary specialities from the country’s cantons on board Swiss aircraft. Seasonal highlights created by famous Swiss chefs are temptingly combined with vegetarian delicacies from the Hiltl restaurant in Zurich and sophisticated delights from the Peninsula Hong Kong Hotel. This successful, popular hospitality concept won Swiss the prestigious Mercury Award from the International Travel Catering Association.

Until the end of May, Canton Ticino in Switzerland’s sunny south is the featured region for the inflight First and Business Class foodservice aboard Swiss’s long-haul flights from Switzerland and selected inbound services. Frank Oerthle, the Michelin-starred and 16 GaultMillau-point chef de cuisine of the Galerie Arté al Lago restaurant at the Grand Hotel Villa Castagnola in Lugano, has concocted an innovative selection of meals together with Swiss to offer Ticinese delights aloft.

Swiss Business guests will be able to enjoy the likes of a San Pietro ham roll with chive and ricotta filling, a fillet of beef with a hazelnut crust on a Maggia pepper sauce and rhubarb crème and strawberry mousse with Szechuan pepper; and Swiss First customers can sample such delights as a lobster coconut ball with a mussel-and-octopus salad or loin of lamb with a Taggia olive crust. Service in both classes will also feature regional cheeses such as “Ticino Mutschli” and “formaggini di capra”, while the selection of wines will extend to local whites such as a Chiar di Luna Bianco di Merlot or a Vinattieri Bianco del Ticino DOC and reds that include a Pra’ Rosso Ticino DOC and a Casimiro Svizzera Italiana IGT.