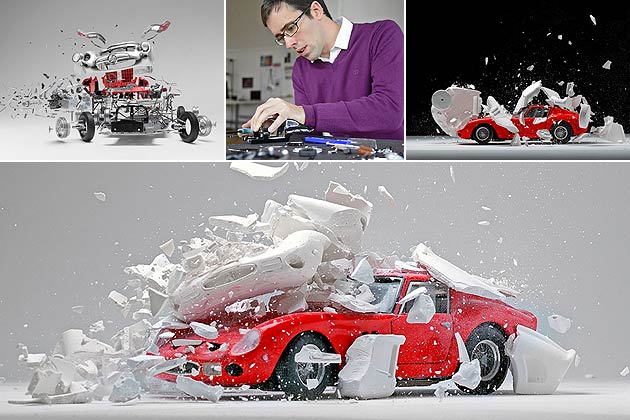 The MB&F M.A.D. Gallery is presenting a series of prints by Swiss artist Fabian Oefner.

Fabian has carved out his reputation by fusing the fields of art and science, creating images appealing to heart and mind. He is constantly on the lookout for capturing life moments that are invisible to the human eye: phenomena like sound waves, centripetal forces, iridescence, fire and even magnetic ferrofluids, among others.

The artworks on display at the M.A.D. Gallery from Fabian’s series are mind-boggling. The three images of the Disintegrating series are exploded views of classic sports cars that Fabian has painstakingly created by deconstructing vintage roadster scale-models, photographing each component, piece by piece in a very specific position, to create the illusion of an exploding automobile. The three other images on exhibition form his Hatch series, which explores the theme ‘the birth of a car’. Inspired by a picture of a hatching chick, Fabian decided to show a manufactured object being born just like a living organism – in this case a Ferrari 250 GTO breaking out of its shell, to create a witty high-octane take on the beginning of life.

While both series feature cars, they both also involve fooling the observer into seeing the images as computer-generated renderings rather than the real photographs that they are.

Fabian Oefner explains that photography usually captures moments in time; but his Disintegrating series is all about inventing a moment in time. “What you see in these images, is a moment that never existed in real life,” says Oefner. “What looks like a car falling apart is in fact a moment in time that has been created artificially by blending hundreds of individual images together. There is a unique pleasure about artificially building a moment… Freezing a moment in time is stupefying.”

Fabian Oefner’s artwork will be on show at the M.A.D. Gallery in Geneva starting on November 27th until May 2014.