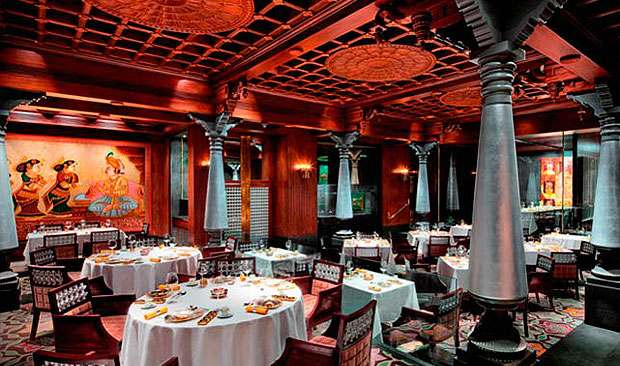 Taj Coromandel has been an integral part of everything that makes Chennai unique, since it opened its doors to guests in 1974. Having undergone a recent refurbishment, the hotel now offers a rejuvenated luxury experience, presenting a perfect fusion of rich South Indian design and classic elegance.

The bedrock of fine living and hospitality in Chennai, Taj Coromandel presents the all-new Southern Spice – the country’s most iconic South Indian specialty restaurant. Having embarked on a journey in 1996 to offer guests the quintessential South Indian experience, Southern Spice has reinvented itself as a ‘culinary destination’ for food connoisseurs and gourmands from across the world.

Authentic ingredients, traditional flavours and homemade recipes come together to ensure that guests are served the most exotic fare that is truly traditional yet enhanced with a touch of modernity. The new Southern Spice is an essence of the 15 years of extensive research by the restaurant’s expert Chefs, reflecting the culinary legacy of the four southern states. The Chefs have put together a unique compilation of vegetarian and non-vegetarian delicacies after widespread culinary journeys into the interiors of Tamil Nadu (Dindigul, Madurai, Karaikudi and Virudnagar), Kerala (Kozhikode and Bekal), Andhra Pradesh (Vijayawada, Vishakhapatnam and Bhejwada) and Karnataka (Mangalore, Kundapur, Udupi and Karwar), acquiring knowledge, cooking techniques, compiling family recipes and traditional banana leaf fare.

Southern Spice reinvents tradition with the liberal use of premium ingredients such as asparagus, soft shell crabs and scallops, cooked in authentic south Indian spices to give the meal an interesting twist. Adding an international touch, the menu has been expertly paired with wines and spirits that best complement the meal.

All-time favourites such as Allepey Fish Curry (fish morsels simmered with green mango and coconut, a specialty from the Venice of the East) and Kori Gassi (a Bunt specialty – chicken morsels with byadgi chillies, coconut, fenugreek and tamarind) have also been included in the menu for loyalists of the restaurant.

A medley of desserts dot the menu with innovative dishes like Chocolate Puranam Mousse (chocolate mousse filled with coconut, lentil and jaggery mix), Raagi Manni (chilled finger millet and jaggery pudding, served with caramelized sugar and fruit compote) and our Chef’s creation – Millagu Elakai Ice Cream (black pepper and cardamom ice cream, a Southern Spice speciality). Nothing ends a meal at Southern Spice like a serving of Elaneer Payasam (chilled tender coconut pudding), a signature dessert that was introduced and made popular in the kitchens of Southern Spice.

Design and Decor
Reflecting a flavour of each of the four southern states, various elements combine to present a grand and sensuous ambience at this restaurant designed by celebrated Ed Poole of Poole Associates. Inspired by the temple architecture of the Chola, Pallava and the Pandya dynasties, which ruled the south Indian states, the interiors of the restaurant features columns, artefacts and murals from this era. The hand-tufted carpets designed in traditional kolam / rangoli pattern welcomes you in true South Indian style. With granites adorning the foyer and the flooring, a series of granite base silver leaf columns support the intricately carved lotus designed roof panels. The resultant perimeter arcades act as circulation paths, found in traditional temple plans, while the central hall forms a grand room in the spirit of the South Indian palaces.

The walls are lined with carved timber planks, commonly seen in Kerala, incised with slots to facilitate airflow in the balmy climate. In place of the regular electric chandeliers, Southern Spice will be lit up by live flames from fourteen custom-made bronze vilakku wall urns modelled on the lamps found in the Padmanabhapuram Palace, taking you back to the time spent in your ancestral homes. Bronze details adorn the silver leafed wall niches with peacock and lotus motifs while Chola period statues enhance the bronze shelves. The four South Indian states are each represented through wall and ceiling murals, recreated by Chennai-based artist Sai Krishnan. The highlight of which can be seen in the three Private Dining Rooms, which have been designed to accommodate 6-12 people.

The dining experience at Southern Spice extends to the linen, cutlery chairs as well. The first-of-its-kind cutlery is a perfect mix of customised silver and gold-plated dinner ware. The glassware comprising the best of Schott Zwiesel Diva series and the Bernardaud crockery exude elegance. The shades of white linen from Beltrami and Frette add to the classic setting, while the uniforms of the staff complement the dramatic ambience.

The stylish tufted dining chairs with mirror velour padded seat and back, and bronze capped feet in stained Mahogany frame together with arm rests in woven rattan lends a tasteful look to the environment. The show kitchen gives guests a chance to engage with the Chefs, who will demonstrate the intricacies of south Indian cuisine, while the live musicians lend a perfect soundscape to splendid food and unobtrusive service.

Star Attractions
One of the highlights of the meal experience is the specialty Rasam menu, which gives Southern Spice a contemporary edge, yet keeping the experience rooted in tradition. Rasam, predictably served as an appetiser or a digestive, now gets a hint of variance where five different varieties of rasam, both vegetarian and non-vegetarian, will be served during the course of the meal.

The traditional Sadhya – a pure vegetarian Brahmin meal – will be served in a ritualistic way, exclusively in the three beautifully-designed Private Dining Rooms. These rooms reflect the culture and tradition of the four southern states through the handcrafted wall and ceiling murals, each with their own distinct style. The silver and gold show plates are the focal point of the tabletop in these rooms, which will prepare guests for the most-sensuous dining experience. With authentic and inspired cuisine, splendid ambience and warm service, Southern Spice returns to Chennai as a world-renowned dining destination, known for its most-genuine culinary experiences.