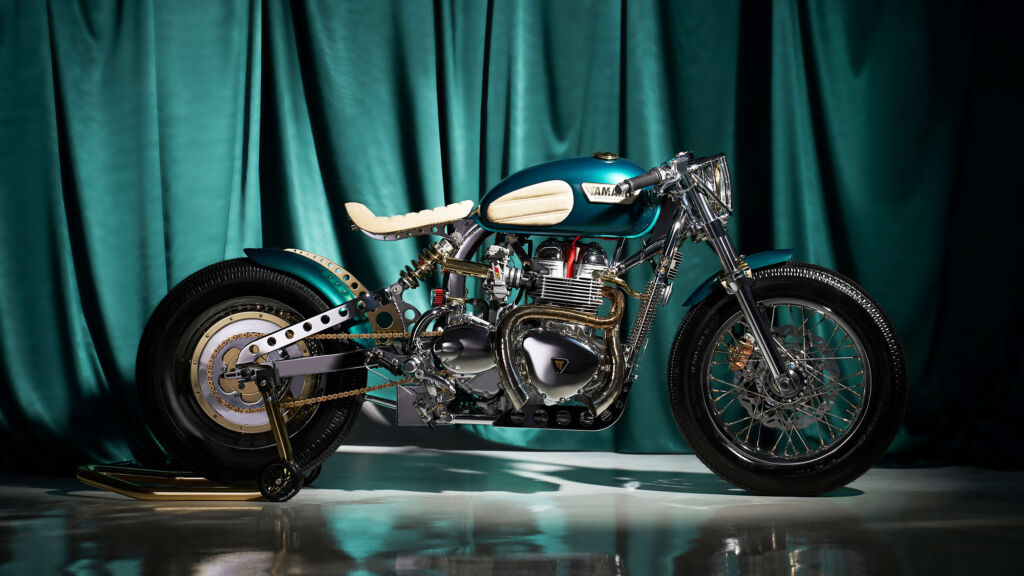 Bespoke Custom motorcycle company Tamarit was founded in 2015 with its origins in a small workshop in Elche, Spain. They produce unique works of art based on engines manufactured by Triumph, and the machines are highly sought. Jeremy Webb looks at the latest gem from Iberia, project 129, named Emerald, which will be going under the hammer with Bonhams.

February 2023 will see the latest creation from Spanish firm Tamarit go to auction in Paris at the Bonhams sale. Codenamed Project 129, the custom motorcycle has now been named Emerald and joins the stunning jewel collection of one-off bikes.

Tamarit were keen to partner with Bonhams Auctioneers as they have a pedigree of selling prestige motorcycles. The British company is excited to have Emerald as a significant lot at the Paris sale.

Emerald gemstones have been revered for centuries, and Tamarit draws inspiration from the glorious green of the jewel in the design of their latest stunning machine. Emeralds are attributed to eternal youth, power and immortality, and healing powers. They are somewhat fitting for a motorcycle. 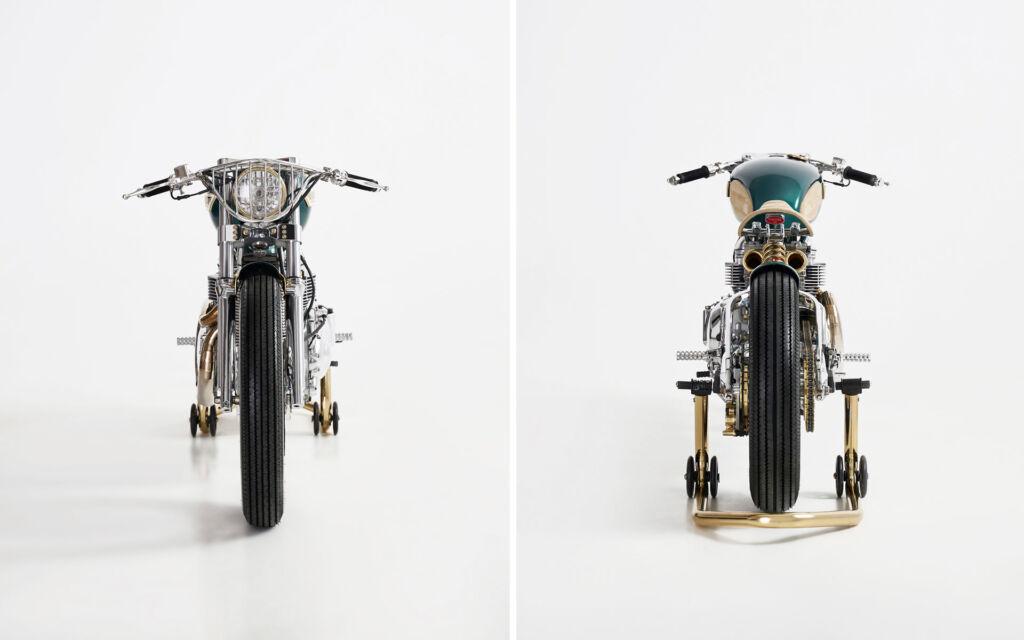 The Emerald project represents over six hundred and fifty hours of work, most handcrafted by skilled artisans. The team consisted of eleven taking the initial sketches through to the completed custom jewel.

At the heart of Emerald is a Triumph Bonneville carburated engine, a link to the past which still stands the test of time. This theme of combining old with new is apparent throughout the custom Emerald, with the design looking like machines of the 1950s and 60s but the construction being entirely up to date.

Chrome plating throughout the Emerald adds to the old-style look and makes the machine shine. Each chromed part takes hundreds of hours of work and great skill. Tamarit is proud that their employees can showcase their craftsmanship in each custom machine manufactured in Spain.

Innovation is clear to see in the design and construction of the Emerald. The Lenticular rear wheel is a functional component with beauty in its form. The wheel prevents air from flowing between the spokes, thus providing aerodynamics and reducing turbulence. The construction of the chassis houses the cooling system doing away with an external radiator. Liquid coolant flows through the frame keeping the engine temperature down. 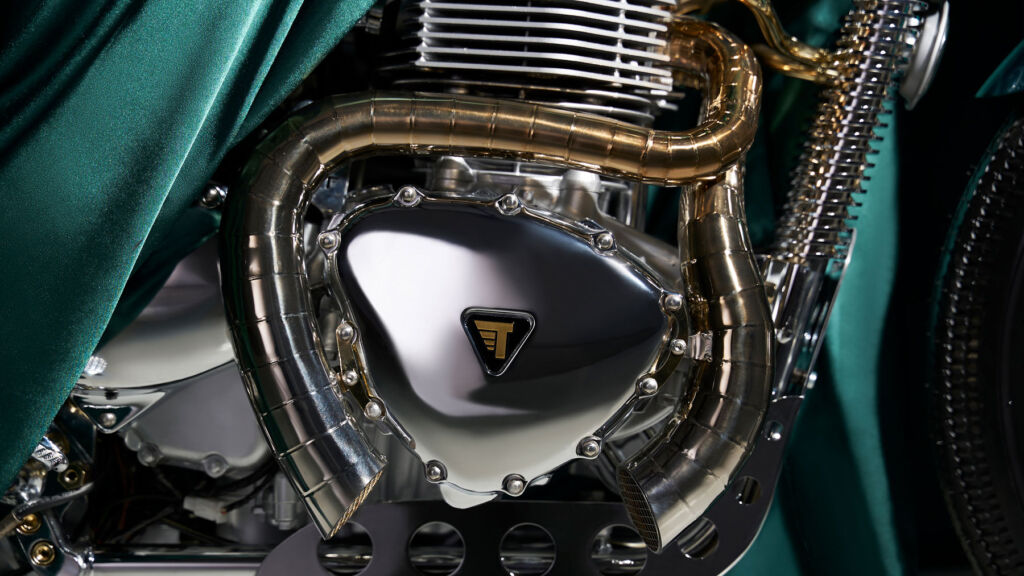 Nothing is placed on the motorcycle without considering its form and function. An exclusive custom exhaust system has been manufactured for the Emerald, allowing it to sit low on the machine. The pipes surround the starter motor housing and add to the aesthetics.

Another example is the Double Board Track handlebar that borders the headlight in a classic style and is adapted to function as a headlight grid. 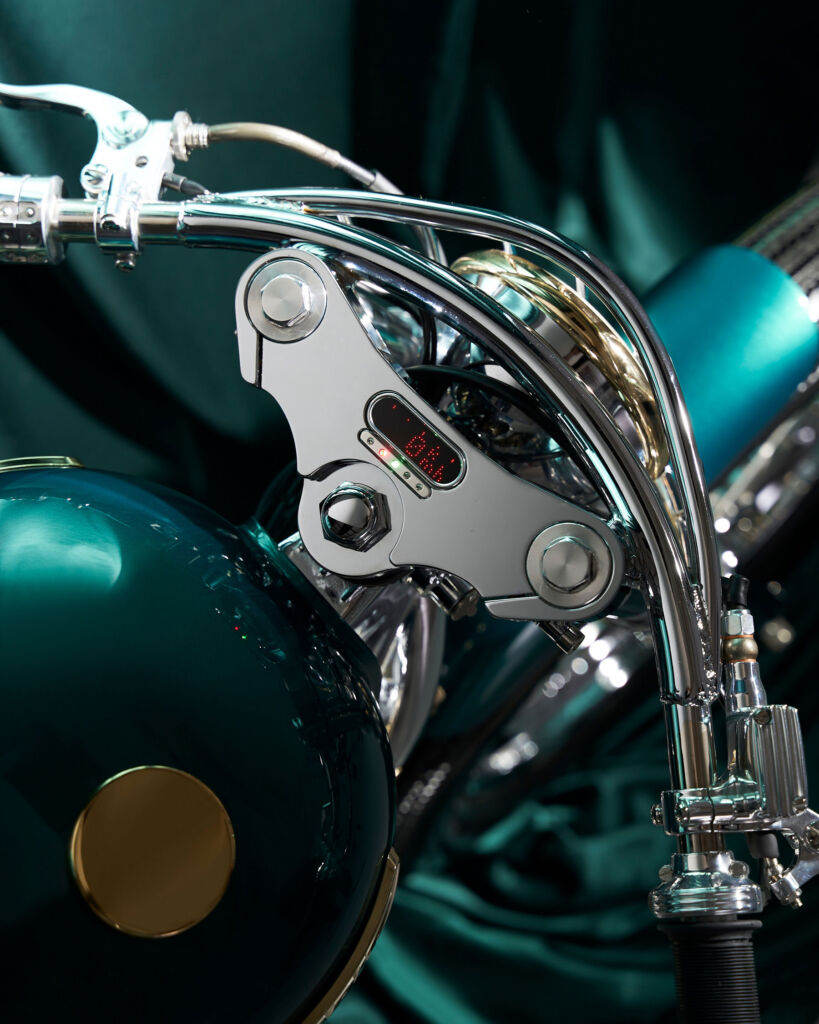 Wanting to keep weight down, Tamarit has incorporated various light materials, such as fibreglass, for the rear mudguard connected by an aluminium bracket. The metal is also used in making the front brake and clutch levers.

The screws throughout have been brass plated, adding to the aesthetics. Gold colour features alongside the Emerald green of the main components of the machine, with the golden chain standing out. Emerald’s battery is in a metal box explicitly created for it, and in the process, the electronic wiring has been simplified, aiding the aesthetics and integration. 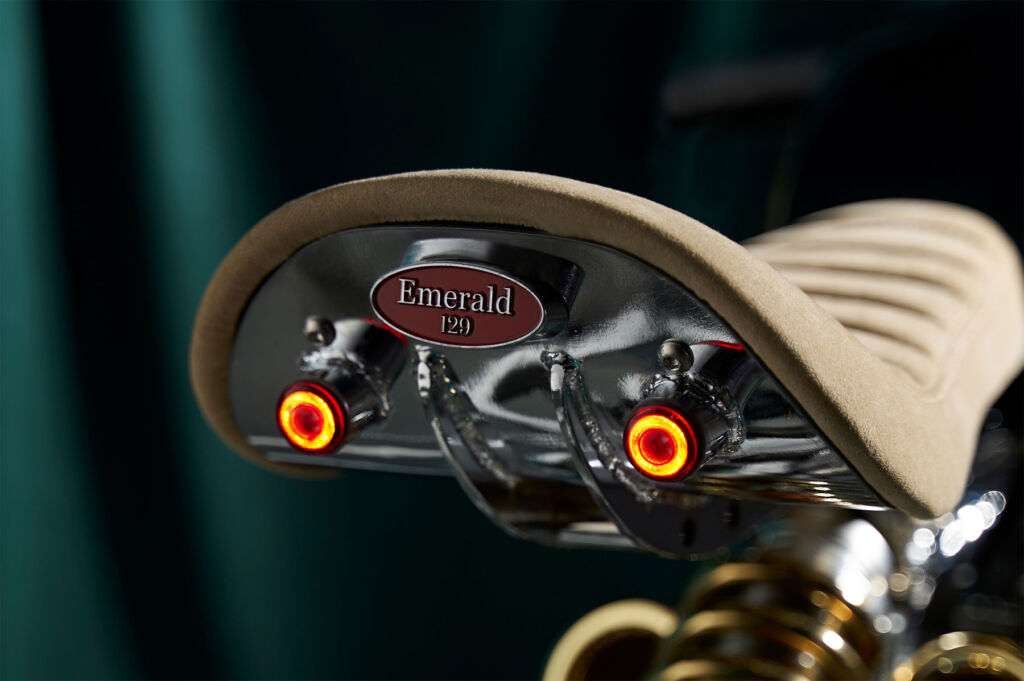 Emerald has a handmade leather seat, pure craftsmanship that includes padding of the same material. In this way, both the seat and the pads are part of the lines of the tank. They lie flush with the sides of the tank, meaning that two holes have been made where they were to be placed to fit and equalize both surfaces. 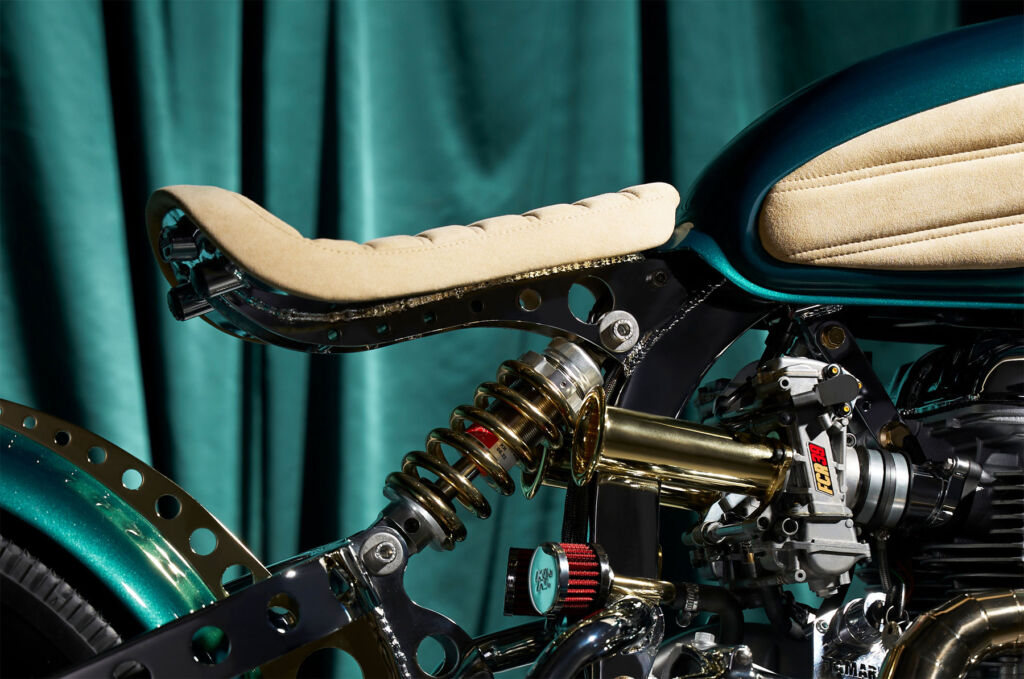 On the fuel tank, the suede trims match the surface. For rear lighting, LED strips have been embedded in the seat base plate, which not only function as brake lights but also as indicators.

It will undoubtedly be interesting to see how much Emerald sells for at Bonhams in Paris. People always want something unique, particularly in the world of motorcycling.

Tamarit has produced over one hundred custom motorcycles, and you can find out more about each one at https://tamaritmotorcycles.com. 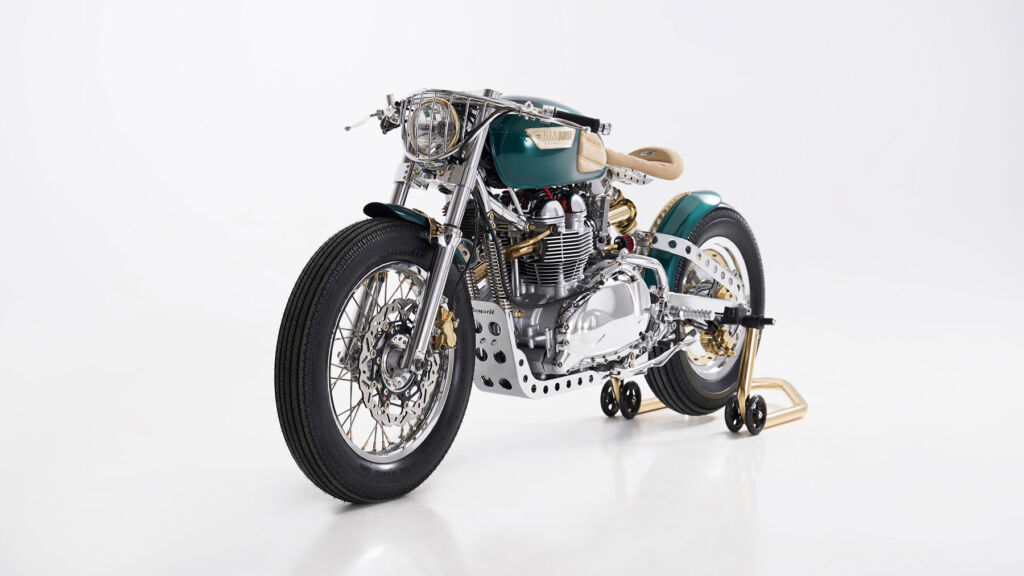